Oil prices have plunged this morning, with the benchmark Brent crude future contract sliding to around $102.85 per barrel at the time of writing, down almost 6.75% from Friday’s close. The driver of these losses has been growing concern over the global economic outlook, with weak US economic data last week compounded by a surprise contraction for the Chinese manufacturing sector in July, highlighted by weak PMI figures released over the weekend. This shows the toll of the country’s zero-COVID policies and highlights how global commodity consumption may continue to weaken over the coming months as the world deals with tighter financial conditions and surging inflation.

Meanwhile, global oil supply has received a boost, with Libya’s oil ministry claiming that daily production has returned to around 1.2mn barrels, levels last seen in April. This comes just ahead of the OPEC+ meeting, where the cartel and its allies will discuss their policy for September and onwards. The meeting is unlikely to be too eventful, with Saudia Arabia and Russia recently committing to what they refer to as a stable market, suggesting no major changes are coming. Therefore, price direction for the week will likely be driven by the demand outlook, suggesting the bias may be skewed towards the downside for now.

Botswana: Data from the Bank of Botswana showed that sales of rough diamonds by Debswana Diamond Company jumped 54% in the six months through to June 2022, driven by strong jewellery demand in the key US market as well as tight global rough diamond supply. The sale of diamonds from Debswana stood at $2.622bn in the six months to June, compared to $1.703bn in the same period last year. In local currency terms, rough sales rose 68.4% to BWP 31bn, partly due to a stronger dollar. The increase in the sale of rough diamonds will provide much-needed revenue for Botswana's government. Earlier in the week, Finance Minister Peggy Serame said that the BWP 1.8bn inflation-relief package, which will be introduced in August, will not widen the annual budget deficit due to the extra revenue from the stronger than anticipated diamond sales in the first half of the year.

Ghana: Finance Minister Ken Ofori-Atta has said that Ghana is anticipating a possible three-year program with the International Monetary Fund (IMF) worth around $2bn to $3bn. In an interview with a local television station, Ofori-Atta said that "we're thinking of maybe a three-year programme... but knowing that within two years, we must have achieved most of what we intend to. We look forward to anything, maybe two or three or so billion dollars over the period." Ofori-Atta added, "programmes usually take about six months, but the interventions of finding support for the balance of payments have to be immediate and those discussions are going on." Ghana is facing a nearly $1bn balance of payments deficit and has turned to the IMF earlier this month for a support package after hundreds of people took to the streets to protest worsening economic hardship.

Ivory Coast: On Friday, two of the world's biggest coca producers, Ivory Coast and Ghana, said that they would raise the premium the chocolate makers and traders pay for beans in August as part of a drive to tackle poverty among farmers. The Ivorian Coffee and Cocoa Council has set its premium, or origin differential, at zero for August compared with -125 pounds per tonne in July, while Ghana's regulator will raise its origin differential to 20 pounds/tonne in August from -50 pounds/tonne in July. The premium is meant to increase the prices paid to impoverished farmers, but it has often dropped below zero due to pressure from multinational cocoa traders and chocolate makers.

Nigeria: A report from state-owned oil company NNPC showed that Nigeria spent NGN1.59trn ($3.83bn) on fuel subsidies in the first half of the year and accrued a $1.2bn funding shortfall for oil and natural gas projects. The report showed that as a result of rising subsidy costs, NNPC had not remitted money to federal accounts all year. Last year, Nigeria was spending about NGN 100bn per month on fuel subsidies. The report, which was presented to the Federation Accounts Allocation Committee, underscores Nigeria's budgetary trouble from spiralling fuel costs and limited oil production. Nigeria delayed eliminating fuel subsidies in January amid rising inflation in the run-up to next year's presidential election.

Uganda: Headline inflation in Uganda accelerated further in July, coming in at 7.9% y/y from 6.8% y/y in June. This was the fastest pace of price growth in the economy since December 2015 and was driven by energy, utilities and food crop prices. Energy, fuel and utilities rose to 17.2% in July from 14.2% in June, while food crop inflation jumped to 16.4% from 14.5%. With inflation remaining above the Bank of Uganda's medium-term target of 5% for the third straight month, risks exist that the bank will move to tighten monetary policy further at the next meeting.

Rwanda: Ratings agency S&P has affirmed its ‘B+’ long-term and ‘B’ short-term sovereign credit ratings on Rwanda. The outlook remains negative. According to the agency, the negative outlook reflects that rising global inflationary pressures and large twin deficits could exacerbate external and debt vulnerabilities more than they currently expect. Moreover, S&P‘s outlook reflects the risks to their expectations for economic growth. The ratings could be upgraded if fiscal and external debt metrics improve significantly above expectations, underpinned by robust and sustainable economic growth and contained inflation.

The continued freefall of the Nigeria naira on the parallel market has raised concerns amongst policymakers, with the Central Bank of Nigeria (CBN) on Friday saying that it was troubled about the value and is making deliberate efforts to avert a further downward slide in the currency. The naira has dropped to successive record lows on the parallel market due to dollar scarcity since July 2021, when the CBN stopped forex sales to retail currency traders to ease pressure on reserves and support the official market. This has pushed firms and individuals to the parallel market where the currency is freely traded. 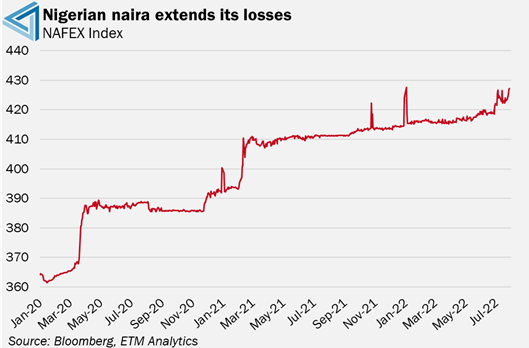 The CBN said that demand pressure was immense from manufacturers and individuals paying school and hospital fees abroad and that it was looking at ways to earn forex in the wake of dwindling oil proceeds. The CBN added that it has been working to manage both the demand and supply challenges. One solution would be to look at and adjust Nigeria’s consumption patterns, given it relies on imports for most of what it consumes.

The naira on Friday plunged to a fresh low of NG710 per dollar in the parallel market, a premium of around 68% over the official rate’s close of NGN427.17. Without more meaningful interventions by the CBN, further downside risks for the naira remain as panic buying and already elevated demand persist and intensify pressure on the currency.

After months of delays, Zambia is on the brink of securing more than a $1bn facility with the International Monetary Fund. In a statement published on Saturday, Kristalina Georgieva, Managing Director of the IMF, said that the support from the Official Creditor Committee for Zambia’s envisaged IMF-supported program, together with its commitment to negotiate debt restructuring terms, accordingly, provides the IMF with official financing assurances. Georgieva added that “the delivery of these financing assurances will enable the IMF Executive Board to consider approval of a Fund-supported program for Zambia and unlock much-needed financing from Zambia’s development partners.”

The IMF statement followed a pledge from Zambia’s creditors to negotiate a restructuring of the country’s debts. The creditor committee said in a statement released by G20 chair Indonesia that it supported Zambia's "envisaged IMF upper credit tranche program and its swift adoption by the IMF Executive Board". 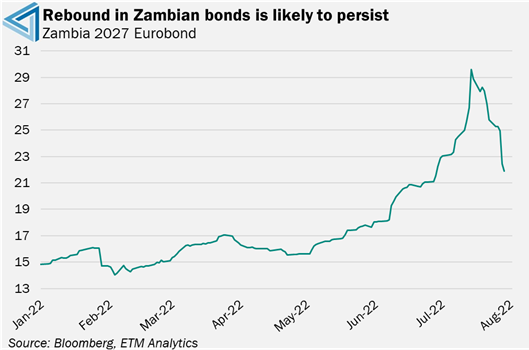 The developments over the weekend come on the back of the government’s push to roll out much-needed economic and fiscal reforms and increase the transparency of outstanding debts. The Finance Ministry formally cancelled over $2bn in undisbursed loans on Friday as part of measures to address its debt challenges. In addition to this, the Finance Ministry said that a number of continuing projects, which were initially financed through commercial loans, will now be financed through government revenues over the medium term.

Zambia's creditor committee said that the restructuring terms would be finalised in a memorandum of understanding. At the time of writing, the creditor committee hadn't provided any further details surrounding the debt restructuring. While it remains unclear when the deal between the Zambian government and the IMF will be concluded, the developments over the weekend will provide a significant boost to investor sentiment and should provide added support for Zambian assets, particularly bonds.

Inflation data published on Friday will have investors questioning the Central Bank of Kenya’s decision to leave interest rates on hold last week. Headline inflation in Kenya came in above expectations, accelerating from 7.9% y/y in June to a five-year high of 8.3% y/y in July. On a month-on-month basis, consumer prices rose by 0.7% in July. 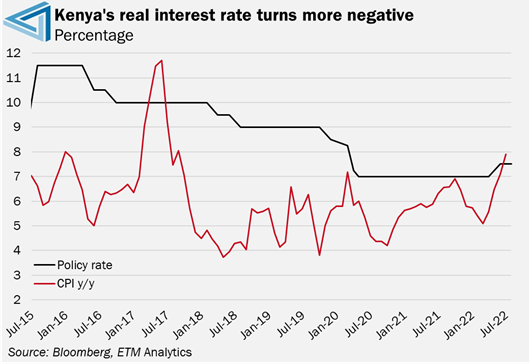 Details from the report showed that the acceleration in headline inflation was driven by higher food and non-alcoholic drink prices, which make up around a third of the inflation basket. For context, food prices rose by 15.3% y/y in July amid prolonged drought and currency weakness. Note that the government has introduced a month-long subsidy to halve the costs of corn flour. The subsidy's effects are only expected to be visible in next month’s inflation print.

While the central bank expects the subsidy to bring headline inflation back within the central bank’s 5 +/-2.5 percentage points inflation target, inflation risks remain skewed firmly to the upside. The risk to the outlook for the shilling remains skewed to the upside due to mounting fiscal concerns and uncertainty over the upcoming election. Moreover, it is worth pointing out that Kenya is running a negative real interest rate of -0.8ppts, which will be compounding the headwinds facing the KES.