Vertical farming is lifting off – the question is how fast?

The progress of two small vertical farming companies, Yasai based in Switzerland and One Farm based in the UK, both going through fundraising rounds will further test investors’ appetite for an industry that raised over US$1.1bn in 2021. This new, technologically enabled, food production method using LEDs and controlled environments consumes less water, uses no pesticides or animal matter, and reduces imports, transportation costs and climate impact. As well as offering 365 days per year growing performance, it addresses the very immediate issue of food security.

These are just two examples of a growing number of vertical (sometimes known as “urban”) farms, and how these and the other vertical farming companies perform beyond the fund raising and over the next three years will be an important test for a new and innovative industry. While still relatively new and niche, vertical farming offers much potential to investors, consumers and the natural world and, with over US$1bn invested in 2021, investment firms like Softbank and GIC are clearly seeing the potential, even if global revenues today are less than US$100mn per year, a fraction of the market.

One Farm and Yasai fundraising overview

Vertical farming, so called in 1999 by Dr Dickson Despommier, an ecologist at Colombia University, envisioned skyscrapers 100s of metres high, used to meet the growing demand for food across cities.

The truth is that most “vertical farms” are not that vertical and, despite Dr Dickson’s vision, most farms occupy re-purposed or new warehouses outside city centres. In 2012, the world's first commercial vertical farm was opened in Singapore, developed by Sky Greens Farms, and was three stories high. Today, it has over 100 nine-meter-tall towers and is the first vertical farm to be certified as organic.

In Singapore, where only 7% of food is grown locally, food production and security issues are clear. In both the UK and Switzerland, 48% of food is imported and, driven by high inflation, the war in Ukraine and failed harvests, many countries across Europe, the US and the Middle East are addressing food security as a major concern. Kalera as a good example has opened a vertical farm in Kuwait, a country that imports a large amount of food, with capacity to produce 500kg of fresh food daily. Kalera is just one of several vertical farming examples in the Middle East.

But the benefits of vertical farms to the planet and consumers are far greater than just being able to grow produce locally, 365 days a year, close to consumers. They produce much higher yields (up to 200x) per square meter of land, and use 90% less water. Growing in controlled environments means no need for harmful pesticides, no animal manure or fertilisers are used, nor peat or other harmful extracts from soils (CO2 is used to support growth). The quality and nutritional value are managed and improved. And, if (and only if) grown in airlocked systems, no water washing is required – this extends shelf life and reduces the amount of food wasted. Lastly, growing food nearer populations irrespective of the environment or local weather reduces transportation costs, time and Co2 emissions. And while they do consume relatively large amounts of electricity, this should be compared with traditional gas-heated greenhouses and associated CO2 emissions of transportation and storage or to extensive agriculture where fertilizers, tractor use and transport to sales all contribute to higher CO2 footprints.

With the global population forecast to reach 10bn people by 2050, the demand for more food is pushing us past the limits of converting more forests to farmland, using fertilisers and the availability of fresh water. On paper at least, vertical farming seems to offer the solutions to an efficient food industry, which is estimated to contribute to 30% of all anthropic greenhouse emissions, 70% of freshwater consumption and 40% of land use. So the question is, why is it not bigger, and why a decade after the first vertical farm opened in Singapore are not more financial investors, governments and food companies all supporting and investing in this space?

There are a number of questions that the progress of vertical farms like Yasai and One Farm will answer in the next few years. For investors with an appetite for investing in a relatively new field of food production, there should be healthy returns, but despite the advances in scientific research and pilots this is still relatively early and carries similar risks to investments in new technology and business production models.

The produce today is still relatively niche, but growing

To date, vertical farming has focused to date mainly on microgreens, leafy greens (eg lettuce), herbs (mint, dill, chives sage, etc.), partly due to the fact that these are easier to grow in controlled environments, are imported in northern Europe from warmer climates and have a higher price point.

Demand growth and pricing are evolving

There is clearly demand for vertical farm produce, as proven by Yasai (which, in pilot mode, is generating cEUR200,000 pa through sales to Co-op) and the larger more established farms like Bowery and Plenty in the US, or Jungle in France. But the questions are around the pace of growth and whether the price of production (as these organisations scale) will fall below the EUR50/kg price of comparable imported produce.

The industry is very much in investment mode, and few or no institutions offer a clear forecast on what the market size could be.

The phrase 'vertical farming' might be a good descriptor for the original skyscraper vision, but it has little consumer recognition. Yasai, like others, uses its own brand, focusing on health and taste advantages as well as home-produced, and is already supplying to 80 stores in Switzerland, with plans to expand both domestically and abroad. One Farm has created and trademarked the brand "Wholly” and plans to distribute through UK supermarkets and other distributors using their brand.

While the benefits to consumers and the environment are well understood, organic produce in the UK and the US, growing at double digits, is still less than 5% of total consumer demand. Just because something is better (for animals, the planet and our nutrition) it does not mean more consumers will buy it, especially if it is priced at a premium or has a shorter shelf life.

Several companies claim improved nutritional benefits of indoor-produced food. Kalera, operating vertical farms across several US and European locations, claims a 50-200% increase per gram in elements such as vitamins A and K, folate and calcium. It will be interesting to see if these benefits translate to a price premium for ‘vertical’ food, or, as Yasai plans, as yields improve they will be offered at a lower price than traditionally produced food.

It will also be important to see how organic and vertically produced foods align and contribute to each other’s success – the answers to these questions are yet to be determined.

Yasai and One Farm are both promising yields far higher than traditional farming, but, with the increased capital investment, a financial return and profitability in a five-year window require yields to improve from c30 kg/m2 of produce per year to as much as 50-60 kg/m2. This improvement partly comes from scale and technology investment, improved automation and processes.

While it seems a tall order, 30 kg/m2 is already 20-30 times comparable yields from traditional farming methods and One Farm already claims this level of yield in its pilot.

With wholesale electricity costs increasing 2-3 times in Europe, both Yasai and One Farm have been challenged on their cost forecasts as they seek to attract investors. Both companies use renewable power. Yasai says 100% renewable but it is not clear if this is self-generated or purchased, One Farm intends to partially meet their power demands through on-site solar. Sky Greens in Singapore uses natural light and water power to rotate food on towers.

Both Yasai and One Farm can use long-term fixed contracts as well to see through the price rises predicted for the next 12-18 months.

Singapore, unlike many European governments, does not have to rely on the political support of the large farming population. Other countries have to balance the needs of the traditional farming community and new innovations, which might explain the reluctance to embrace and support the industry. This could change – what is important for governments is that these are complementary not competing methods. Vertical farming advocates argue that vertical farming will not displace the farming communities of Europe but be a complementary replacement for high-cost, high-imported and high-carbon ways of production and replace food supply outside natural growing seasons (the UK imports 90% of all spinach sold on the shelves)

Unlike the organic certification, there is yet no similar certification for a vertical farm in Europe where organic refers to solid base production. There is no reason why vertical farming produce cannot be organically certified, as has been done in Singapore and in the US, where this has now changed to include vertical farming where pesticides are not used. This kind of move in Europe or the UK would be of great benefit.

Several countries, like Switzerland, are offering R&D grants that have been used to fund start-ups (Yasai has received EUR4.3mn to date, and this is just one example).

Traditional farming methods often struggle to attract large capital investment and new innovation. For investors, the new innovation of vertical farming offers attractive returns from a high capital and potentially highly scaled business model, if the assumptions and improvements in yields and costs are delivered.

For the planet, the advantages are enormous; however, even if it grows to 10 times the size in the new few years, it is unlikely that this will replace large-scale traditional commodity product methods and will only make a small dent in the 13.5 GTonnes IPCC scientists estimate AFOLU (agriculture, food and other land use) can contribute to overall GHG reduction.

To really move the needle, the investment in vertical farming needs to be complemented with major investments, incentives and demand for alternative and regenerative farming methods, reducing carbon emissions and the impact on the natural system.

The author is the former founder and CEO of Refinitiv, and chairs the TNFD (Task Force on Nature-Related Financial Disclosures) as well as an investor in natural capital. 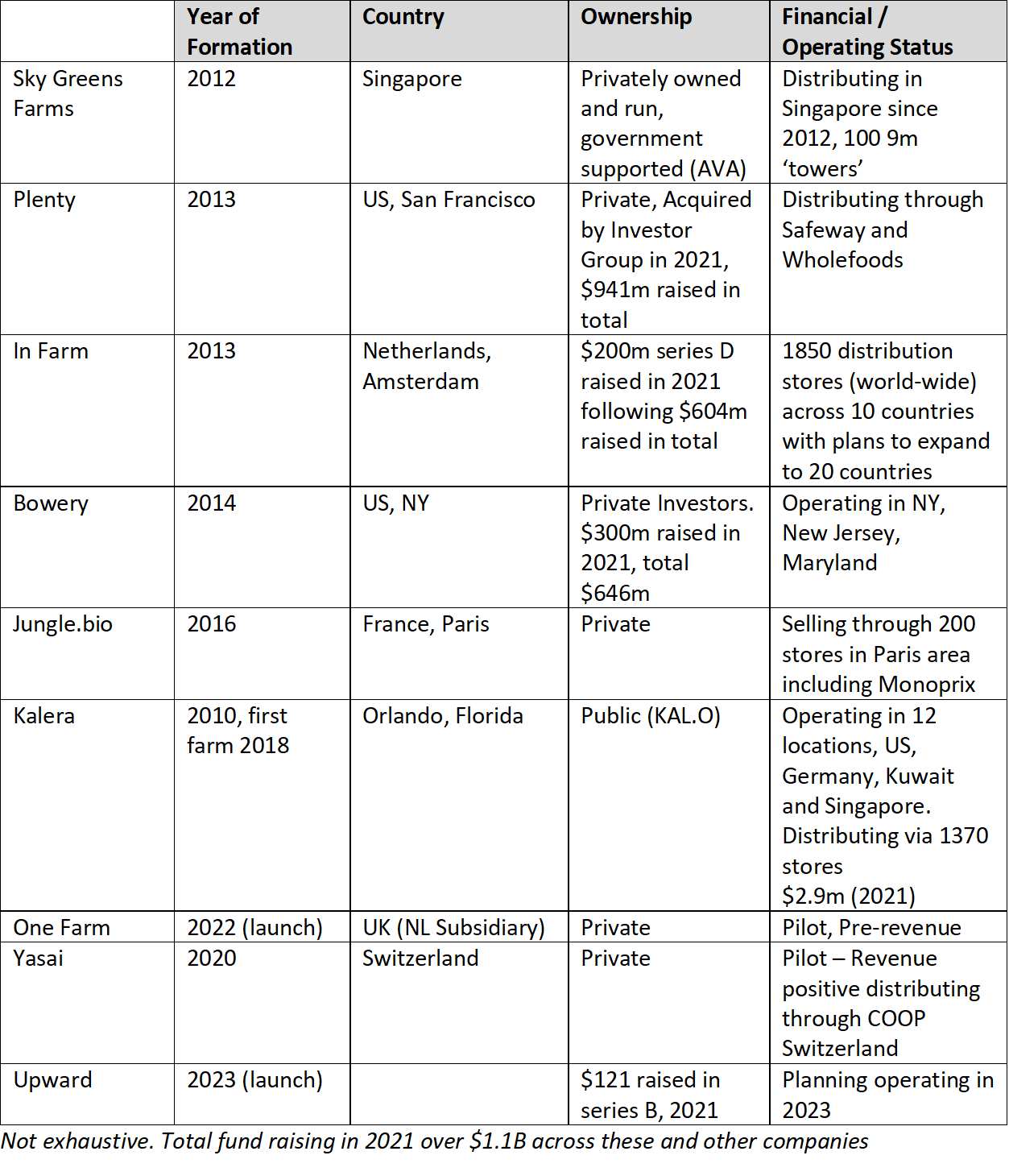