Vaccine colonialism and who will get the jab first

Author’s note: Given the importance of who gets the Covid-19 vaccines first, the quality and availability of data about vaccine pre-purchases is shockingly poor. Building on our theme of how development finance institutions will change post-Covid, previously covered here and here, providing information transparency is one way the development finance institutions could catalyse the private sector fight against Covid-19.

In the meantime, this report is based on the best data that I could compile and is sure to contain inaccuracies. I hope that readers will be able to add examples of pre-purchases for their countries. Please send these to paul.domjan@tellimer.com so that I can update this article as a data source for the future.

2020: A milestone in public health … which has nothing to do with Covid-19

On 25 August, Africa was declared free of wild polio.[1] Only a decade ago, Nigeria alone counted for more than half of global cases of wild polio, and the disease has now been eliminated. It’s a tremendous achievement. Wild polio now only circulates in Pakistan and Afghanistan, and, hopefully, it can at least be contained there, if not eliminated entirely.

As WHO data shows, eliminating polio from Nigeria did not require vaccinating the entire population. However, it did require pushing vaccination programmes deep into rural areas and conflict zones to achieve sufficient geographic spread of the vaccine to prevent the disease from circulating. This was a public health victory, not a technological one: Africa has not manufactured a single vaccine in the last quarter-century. 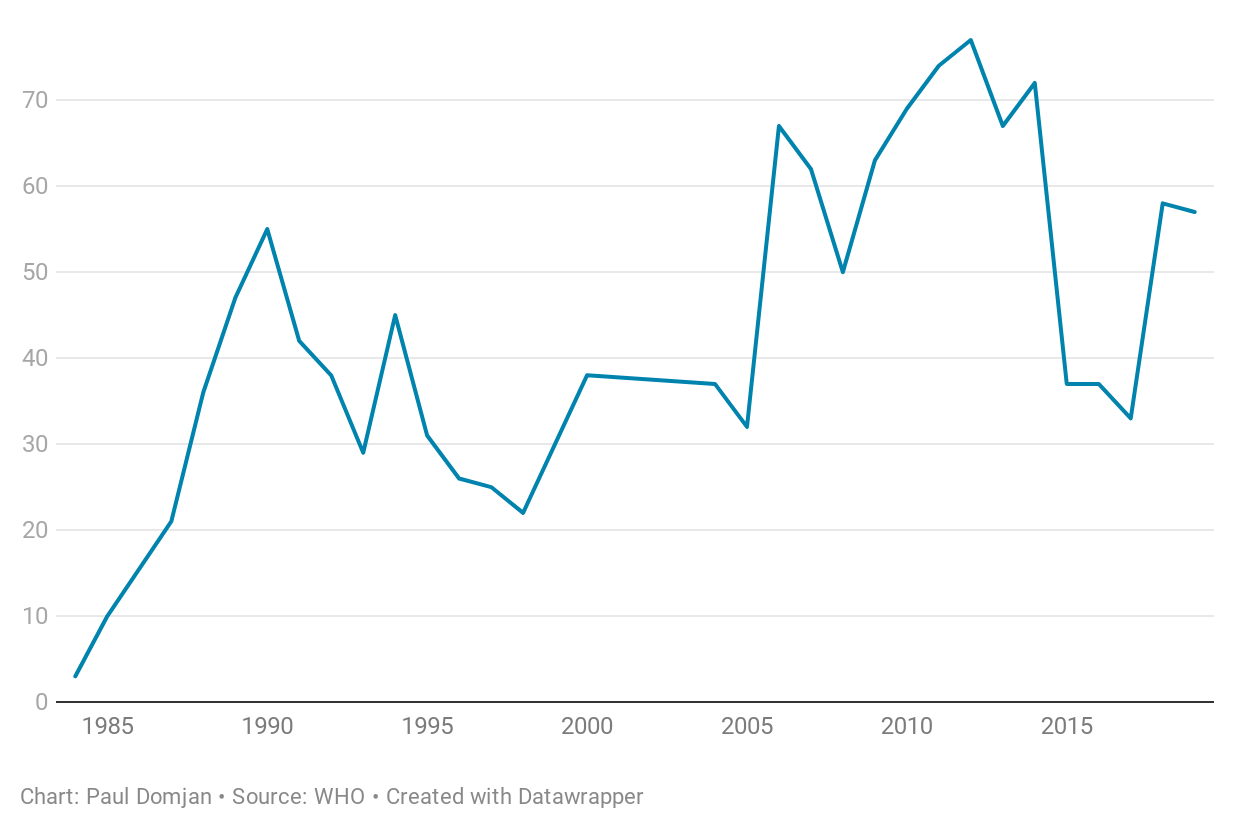 Of course, only those who are most invested in the fight against polio will remember 2020 for this milestone. For everybody else, 2020 is the year of Covid-19 – we hope that 2021 will be the year of the Covid-19 vaccine.

The first polio vaccine was developed in 1955, and in 1960, Czechoslovakia became the first country in the world to demonstrate the complete eradication of polio. The vaccine’s early success led to hope that polio would be eliminated globally, but polio has far outlived Czechoslovakia. As the map below shows, much of the world was still fighting polio well into this century. 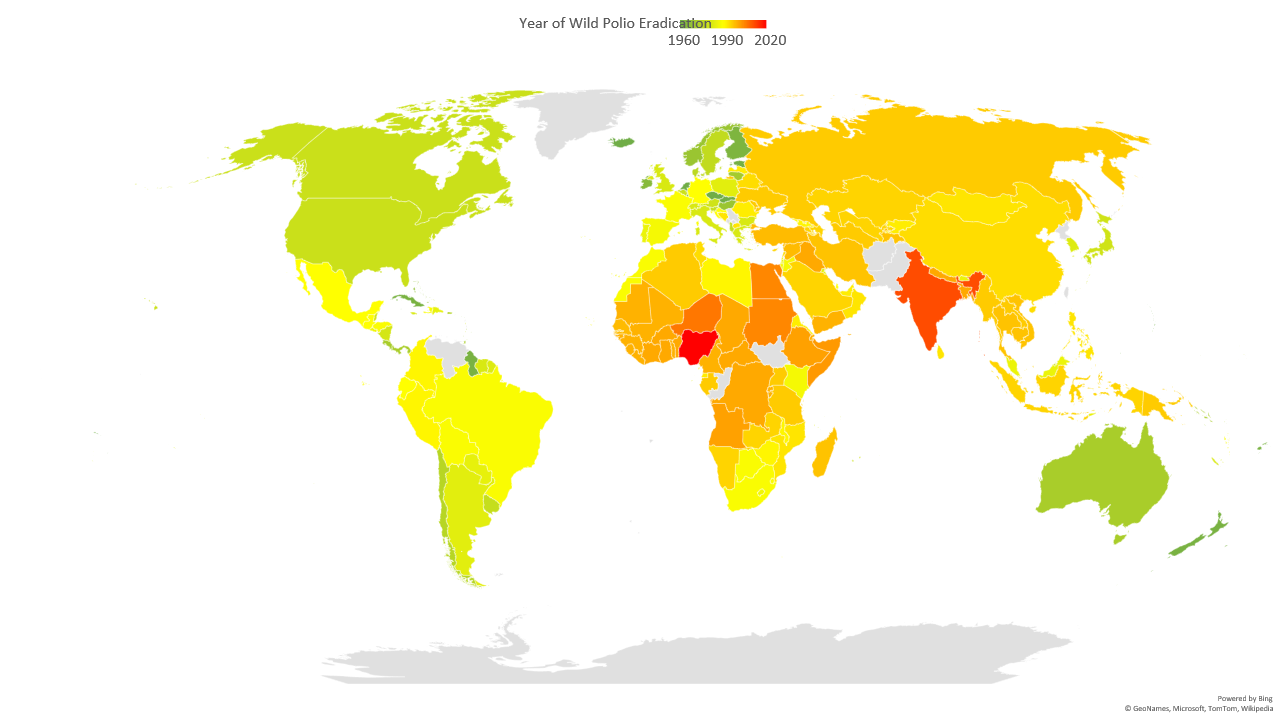 The same will likely be the case with Covid-19. Even if the first vaccines work well – and the rush to develop them with curtailed human trials suggest they may disappoint – roll-out will take years. We will have to manage Covid-19, not expect to eliminate it.

We now know who will get a vaccination first: Russia, which rushed to deploy Gamaleya Research Institute’s vaccine without third-stage trials, although it has now walked back that position slightly, after objections from vaccine experts. Looking further ahead, though, the most important question for economic recovery will be which countries not only reach herd immunity but, because of vaccination, are confident that they have, so that the economy can fully reengage. While there is excellent data on the current status of vaccine development in tabular, graphical and textual form, and there are plenty of news reports about individual countries pre-purchasing vaccine doses, it is difficult to combine all of this data into a clear global picture.

By compiling information from individual news articles, I have developed an initial view of both where vaccine trials are taking place and which countries have pre-purchased Covid-19 vaccine doses. There are three pieces to this puzzle. First, some governments have already pre-purchased vaccine doses, either in cash or as part of vaccine development funding. Additionally, some governments have secured additional options to purchase further vaccine doses if necessary. Finally, while Russia, India and China have not explicitly pre-purchased from their domestic suppliers, all three countries have domestic vaccine development programmes, and, in the case of India, extensive licensing of Western vaccines, which can be expected to be available to their domestic populations.

Availability will be patchy

While the European Union, Australia, New Zealand and Switzerland have all engaged a single vendor to supply their population, Japan has two vendors and the US and UK have multiple vendors. This gives the latter countries insurance against the possibility that one of the vaccines proves to be ineffective or unsafe. Beyond the developed markets, only Brazil, Mexico and Indonesia have signed supply agreements with global pharmaceutical companies. However, Australia’s agreement covers New Zealand and the Pacific Island states as well.

Figure 3: Current vaccination pre-purchases, including both outright purchases and options to purchase 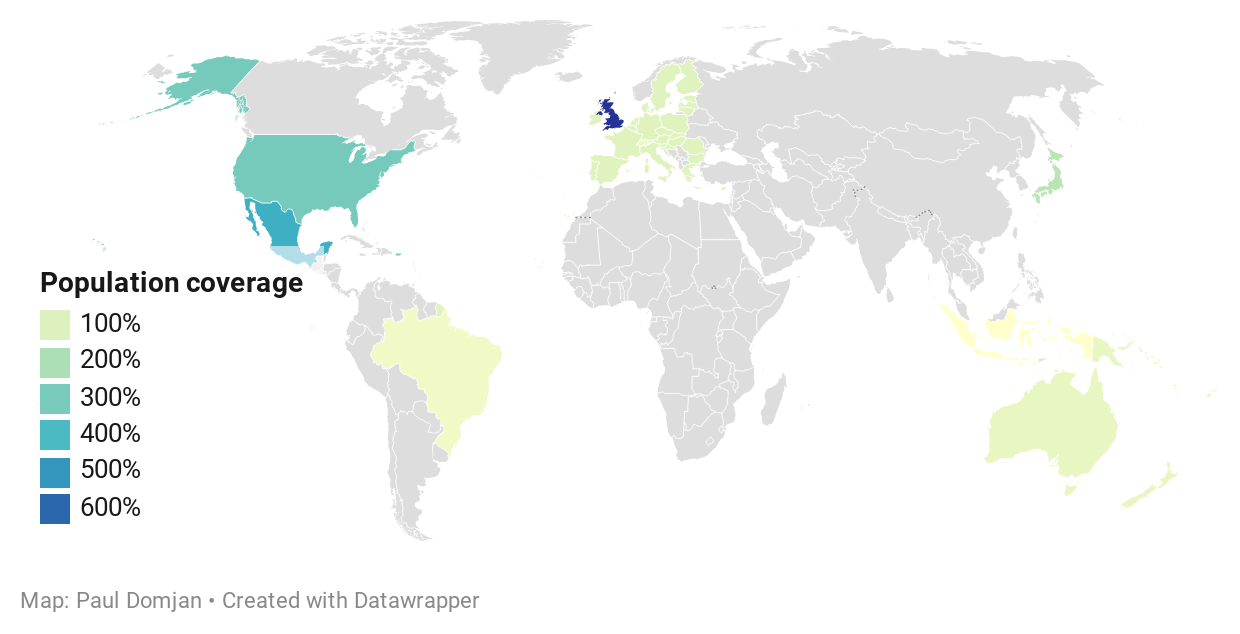 The picture looks somewhat different when we shift to vaccine trials. Among the trials in developing countries, those in India, Russia and China are of domestically developed vaccines that are expected to be domestically manufactured and available locally. 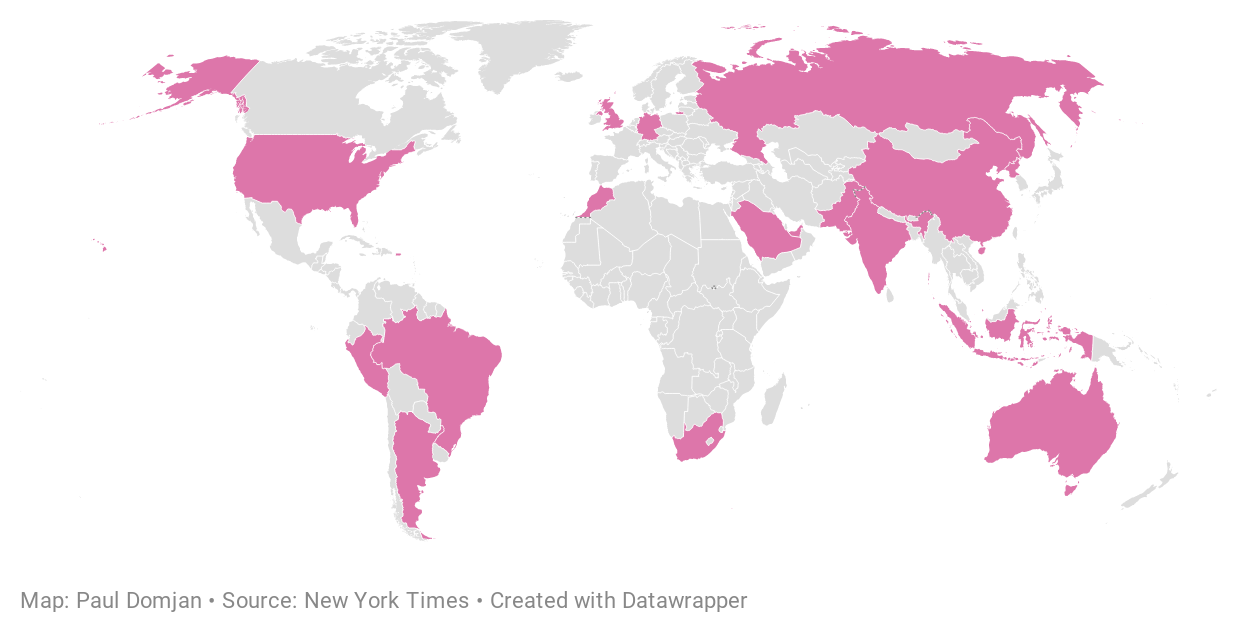 Availability does not mean uptake

As a child, I suffered from debilitating pneumonia. I was lucky enough to qualify for a late-stage pneumonia vaccine trial, which saved my life, but at the expense of damaging my lungs. As far as I know, the particular vaccine variant I was given was never approved for general use.

The biggest challenge of the final push to eliminate polio in Africa was not just reaching rural areas, but convincing people that the vaccine was both necessary and safe. The same problem exists in developed countries, especially in the US, with its strong “antivaxxer” movement. In both cases, the typical response is that the vaccine has been extensively tested (on people like me) and shown to be safe in both the short and the long runs.

The reality is that the pneumonia vaccine that damaged my lungs had probably already been more extensively tested than the first Covid-19 vaccines will have been when they are rolled out at large scale. And I already see sensible people here in the UK, who have never rejected a vaccine before in their lives, saying that they will not take the Covid-19 vaccine because of this lack of testing. After all, they typically say, so many people will take it that they can free ride on the herd immunity that those early adopters create.

Leaving aside the ethical problems of free riding, it creates a collective action problem that may seriously hamper vaccination efforts in developed countries in certain areas (think of parts of the US) and within certain communities (think of the South Korean evangelicals who are at the centre of South Korea’s new Covid-19 outbreak) that are resistant to immunisation, at the same time as developing countries will be looking for doses. The current distribution of seasonal influenza vaccinations gives us a preview of what this might look like: only 38% of Americans get vaccinated, and the virus kills 80,000 Americans every year, yet 95% of global seasonal influenza doses go to the wealthy countries of North America, Europe and the western Pacific, with only 5% of the supply available to the global south.

The implication of this for investors is clear: track vaccine allocation closely and be ready for the epidemic to last much longer in those emerging markets that are unable to secure or administer the vaccine widely.

For governments and development institutions, the implications may be less obvious but are equally important. There is no way that we, as a human community, can achieve globally equitable vaccination outcomes without data about who is able to make what and who had purchased what from whom. Even for seasonal influenza, data on vaccination production and distribution is very difficult to find. Whether it’s the WHO, the research arm of a development finance institution or an academic institution, compiling and accurately maintaining this data will be critical to ensure that developing countries are not left behind in the Covid-19 endgame.

I would like to thank Adam Gabso and Rafael Domjan for research support.

[1] Vaccine-derived polio, in which a mutated version of the poliovirus in the vaccine circulates within under-immunised communities, still exists in Africa and various parts of Asia and the Middle East.