The IMF published the concluding statement following its 2022 Article IV mission to Uzbekistan last week. We presume the Board discussion will be held in coming weeks.

On the whole, we find the statement to be reasonably positive, after the country weathered the pandemic relatively well and despite the impact of Russia's war in Ukraine, given its strong fundamentals. Uzbekistan's economy will be hit by the impact of the war, primarily due to its heavy dependence on remittances from Russia, which will result in lower growth this year. Higher global food prices provide an upside risk to inflation.

But some of the impact may be ameliorated by higher gold prices (a key export). Moreover, low public debt and very strong liquidity buffers provide some protection to withstand the macro-impact. In contrast, other countries in the region have less policy space to withstand the crisis and have turned to the IMF for help, seeking an IMF programme (Georgia) or a programme augmentation (Moldova), while North Macedonia (a stronger credit) has this week sought insurance in the form of a precautionary credit line. 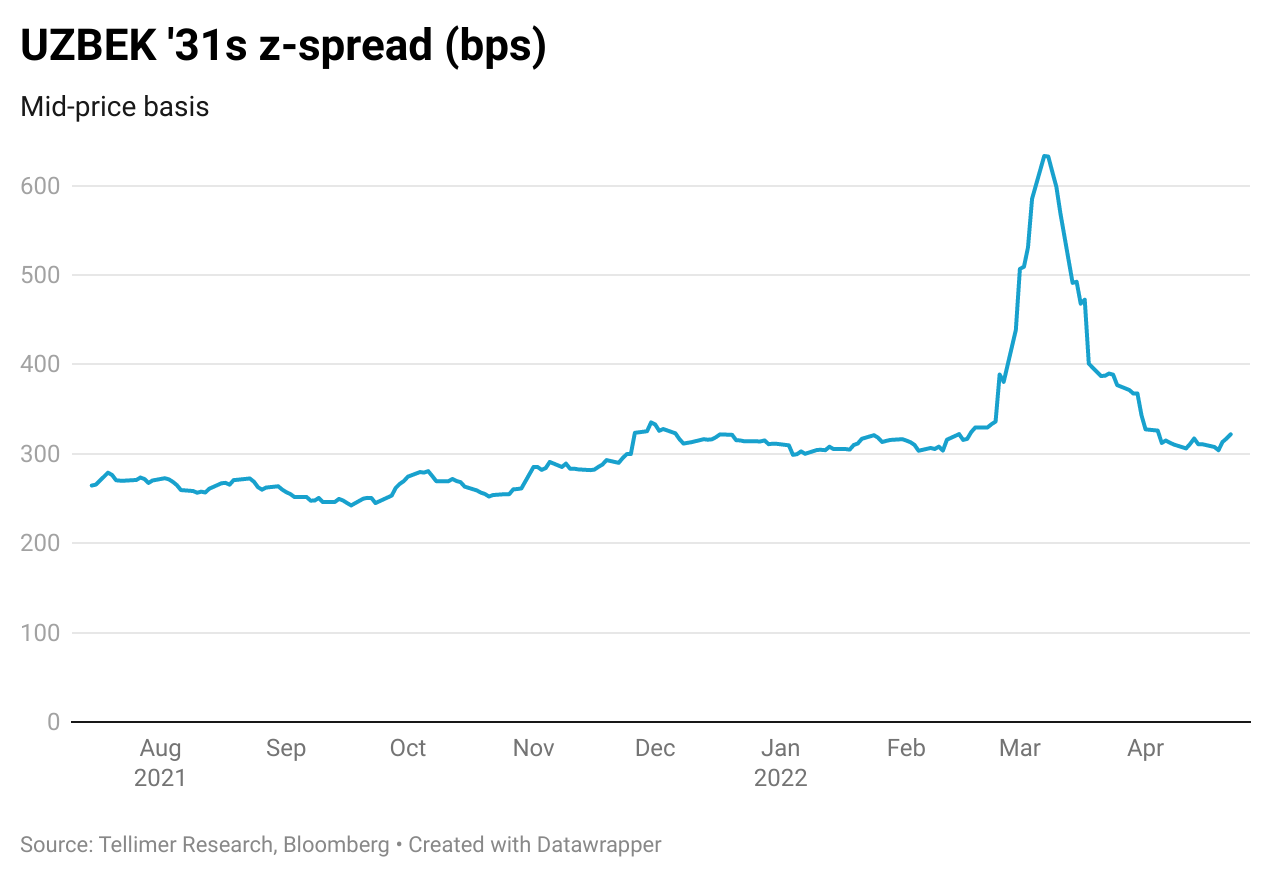 The war in Ukraine and greater economic uncertainty in Russia, a key trading partner, provide downside risks to Uzbekistan's outlook. The IMF have shaved 2.5ppts off its growth forecast for this year, due to the impact of the war, now projecting real GDP growth of 3-4% (the point forecast is 3.4%), down from 6% previously expected, and 7.4% seen in 2021. This is consistent with the EBRD's recent downward revision for the country, from 6% to 4%.

This is caused by lower remittances and financing from Russia, which is expected to reduce consumption and investment, while additional spillovers from trade disruptions, higher fuel and food prices, and tighter global financial conditions create additional headwinds.

Remittances are a major source of family incomes and foreign exchange earnings in Uzbekistan, accounting for about 11% of GDP, according to the EBRD, and most of this (over 80%) comes from Russia (Uzbekistan is the third most reliant on remittances from Russian in Central Asia after Kyrgyz Republic and Tajikistan). However, as a net energy exporter, Uzbekistan should benefit from higher energy prices. It should also benefit from higher gold prices (gold accounts for about half its exports). 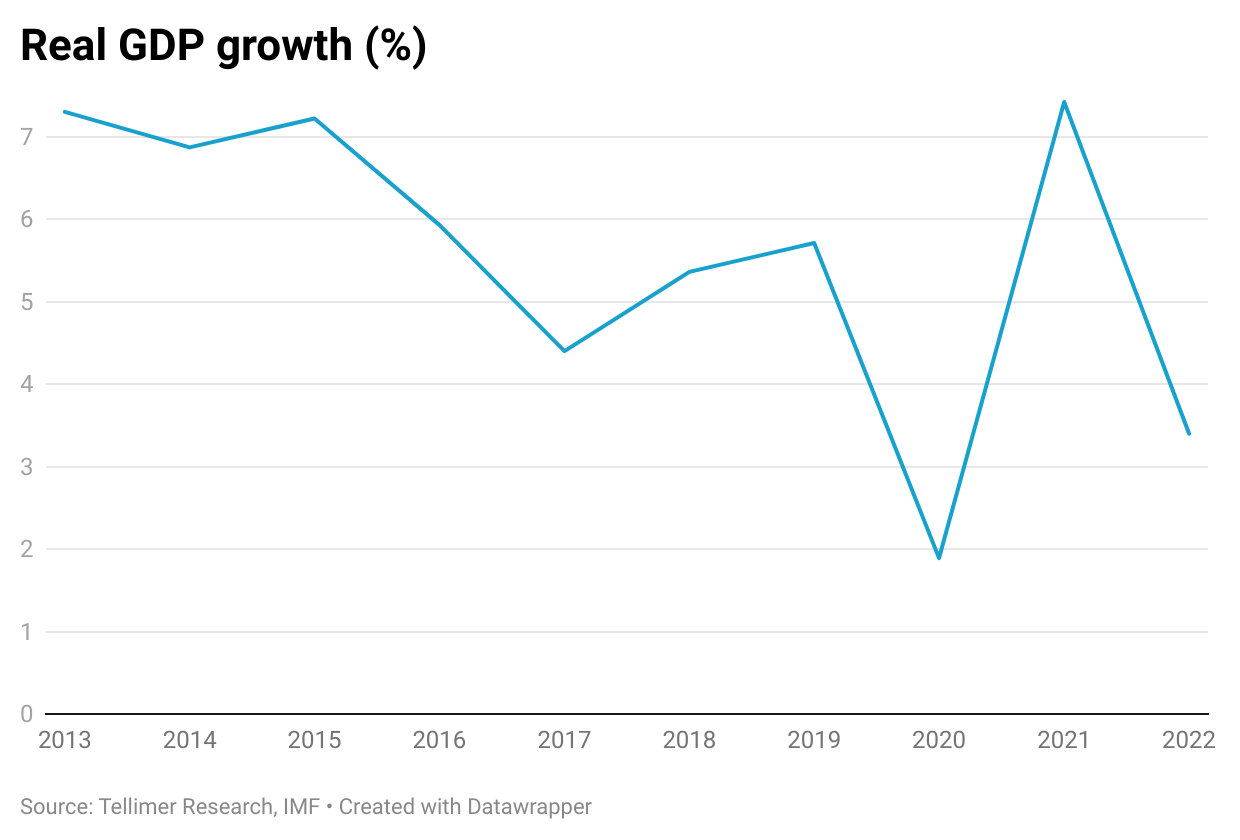 Inflation is expected to remain elevated. The IMF projects CPI inflation to rise to 12.1% by end-2022, compared to 10% at end-2021, with upside risks constrained by the central bank's relatively tight monetary policy stance. The IMF noted the central bank "acted decisively" by raising its policy rate from 14% to 17% on 18 March to anchor expectations and stem exchange rate pressures. With inflation currently running at 10.5% yoy (March), we noted real rates of 650bps are still very positive.

The currency (soum) was, however, allowed to depreciate in mid-March, departing from its crawling peg (which has seen a pace of depreciation of about 7% per annum vs the US dollar since 2017), as the authorities allowed greater exchange rate flexibility to absorb the external shock. This is consistent with IMF advice. The soum has since recovered some of this move too.

But the current account deficit is projected to widen to about 9.5% of GDP this year, compared to 7% in 2021, with lower remittances partly offset by lower imports and higher commodity export receipts.

The IMF support a modest easing in the pace of fiscal consolidation due to expected slower growth, consistent with its recommendation in the December staff visit (which was well before the war), because of the fiscal space afforded by low debt.

The IMF project a 4% of GDP fiscal deficit this year, down from 6% in 2021, and returning to the 3% target that was contained in the 2022 Budget a year later (ie 2023). According to the Fund, higher revenues from gold sales will offset the decline in revenues due to reduced activity, but additional spending will be needed to protect vulnerable households, who will face falling remittances amidst rising prices. This could be achieved by re-prioritising spending and investment plans.

The larger deficit could be financed largely by multilateral and bilateral official support and limited domestic financing. The IMF note Uzbekistan could also tap the international capital markets as conditions improve.

With Uzbekistan bond yields still low, less than 6% (z-spread c325bps) on the 2031s, despite the market volatility, that still looks a viable option to us. Uzbekistan last came to the market in July 2021 with a dual tranche US$ and local currency issue. Uzbekistan (B1/BB-/BB-) now has four dollar bonds outstanding, since its debut in 2019, amounting to US$2.2bn in size (only 3% of GDP), with total interest payments of only US$96mn a year. The next maturity, US$500mn, is not until 2024. We think a LMO (tender offer) tied to a new issue could make sense.

Uzbekistan remains at low risk of debt distress, according to the IMF assessment, while new fiscal rules should help to anchor expectations and build fiscal credibility. A new debt law limits public and publicly guaranteed (PPG) debt to 60% of GDP (there is a lot of headroom here, given the existing low level of debt, and some investors may worry it it is a rule or a target!) and the fiscal deficit to 3% of GDP in the years ahead. The IMF project public debt at 39.4% of GDP this year, up from 36.8% last year, and compared to 28.4% in 2019 (ie debt is some 10ppts higher than pre-Covid levels).

However, investors may be concerned about the debt burden's trajectory, given the sharp increase in public debt/GDP over the last decade, even if remains at a relatively low level and affordable. 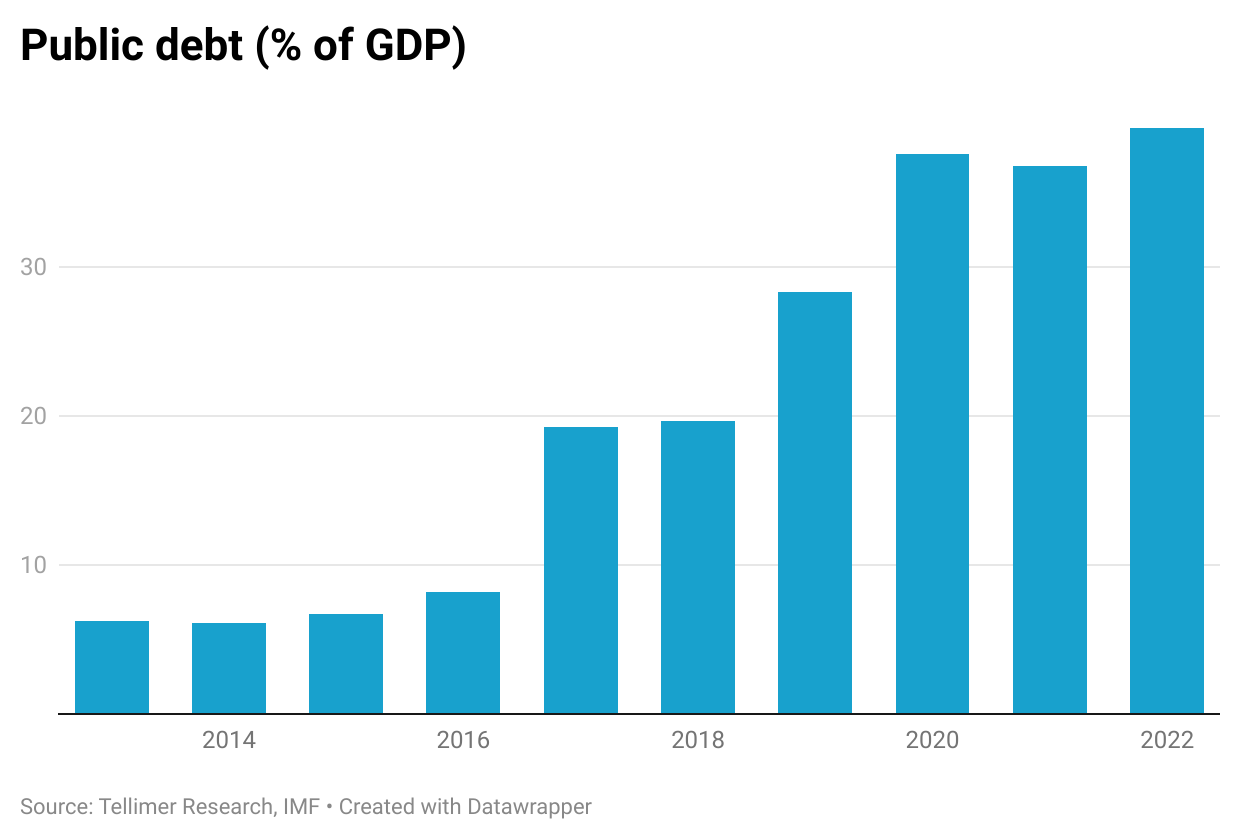 A high level of international reserves and long maturities further mitigate the risk of debt distress. Indeed, on our calculations, international reserves (including gold), the definition used in the last Article IV, are about US$35bn (as of February 2022 based on IFS data). This is 51% of GDP, putting it in the top decile in the world (15th highest, based on IMF data), and a similar level to Saudi Arabia – it would also make Uzbekistan a net public external creditor.

However, we wonder if the unprecedented Western sanctions on Russia's reserves may cause investors to reappraise just how much comfort this can provide, at least in some countries (although this shouldn't be a threat specifically here, or in general, if countries behave themselves). 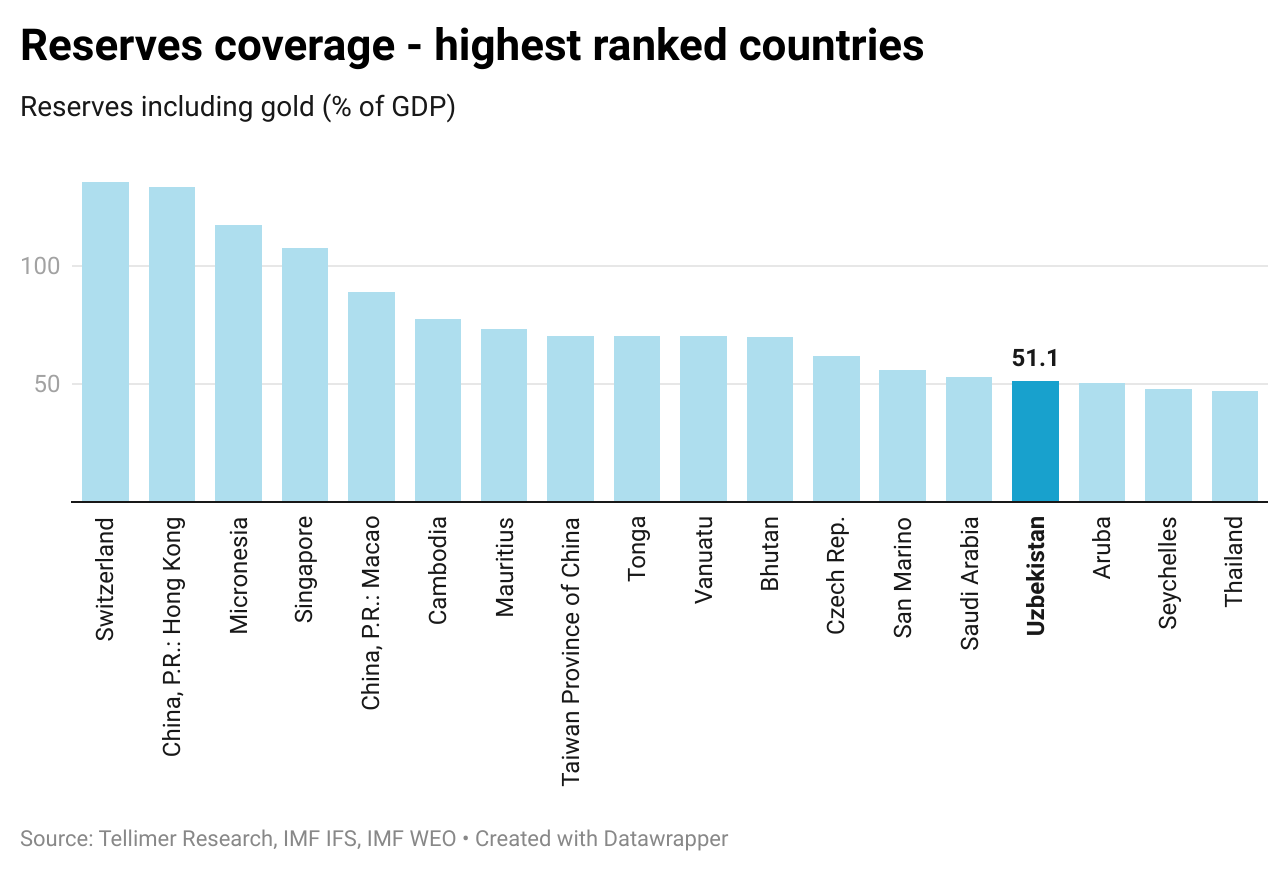 In addition, although a low-income country, we note that Uzbekistan did not participate in the Debt Service Suspension Initiative (DSSI) despite being eligible. That may add to its market credibility. It does, however, remain eligible for the Common Framework, should it fall into difficulties, although that really should not be a risk at this stage (see here and here).

In addition, the IMF noted the authorities' commitment to continue pursuing a structural reform agenda. It noted the "impressive progress made in recent years" back in its December 2021 statement.

We assign a Buy recommendation on UZBEK ‘31s at a yield of 5.9% (z-spread 317bps) at a mid-price of US$85.8 as of cob 21 April on Bloomberg. The bonds have only slightly outperformed the market this year (with a total return of -9.4% vs -11.9% on the Bloomberg EM Aggregate Index), but have recovered most of the initial post-war losses. The '31s fell nearly 20pts. However, since the recovery, they have eased again in the last two weeks (-2pts) due to global rate concerns.

We suspect, given strong reserves coverage, Uzbekistan should be less sensitive to external financing conditions than others, although its corporates will be. That said, a more protracted war in Ukraine, and Russia's economic collapse, would increase downside risks to the outlook.

Another investor concern may be that Uzbekistan gets drawn into Moscow's sphere of influence, as Putin seeks to re-create the Soviet bloc, either willingly (like the Presidents of Belarus or Kazakhstan) or unwillingly (like Georgia or Moldova). However, this seems less likely to us under Uzbekistan's reform minded President (economically, at least). Governance concerns may also weigh on investor appetite. 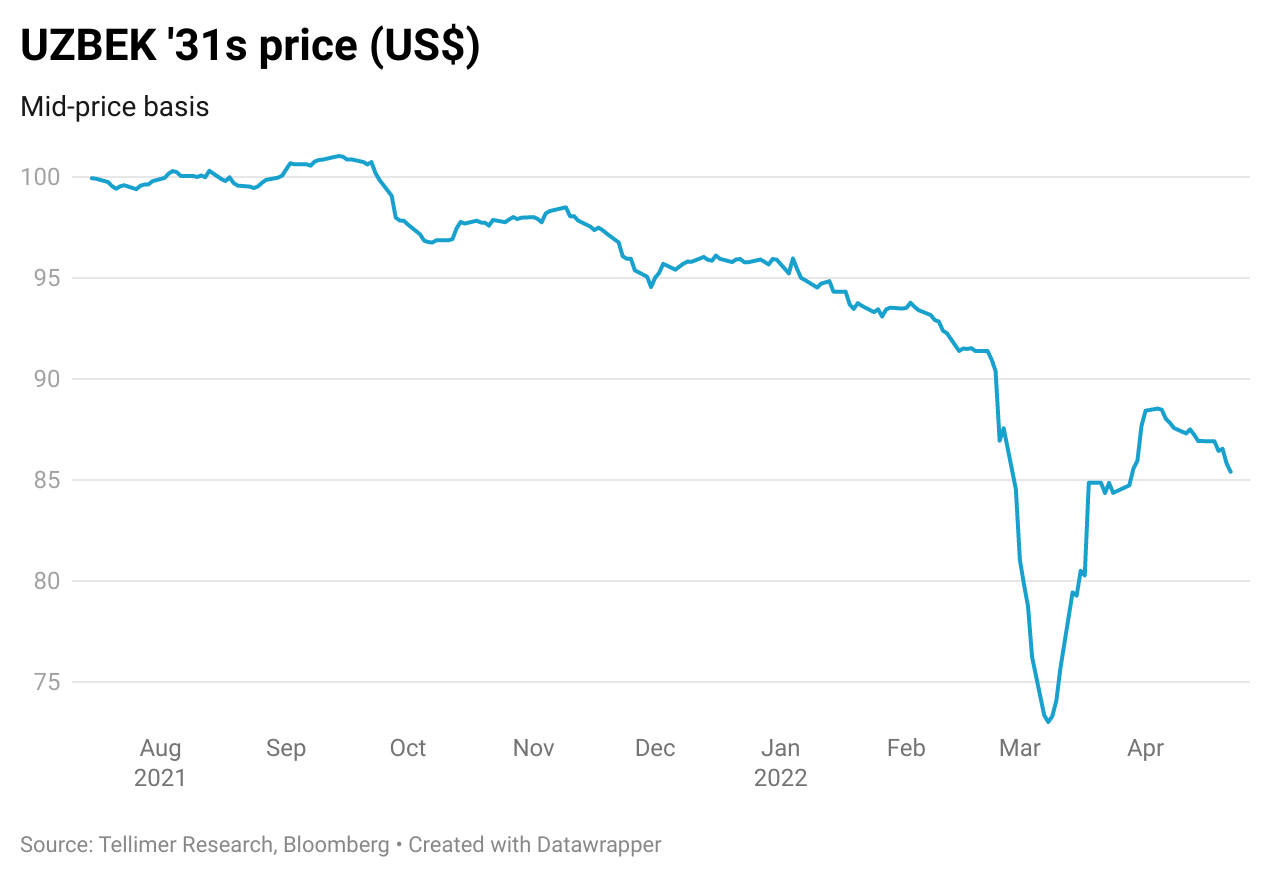