We hosted a webinar on 27 April with the IMF's Resident Representative in Kampala, Izabela Karpowicz. Our key takeaways are outlined below. These words are our own and not those of the IMF. We thank Mrs Karpowicz for her time.

With the second review of Uganda's ECF programme set to begin next week (the completion deadline is end-June), the IMF has painted a relatively positive picture of Uganda's economic outlook. Growth continues to recover amid low Covid positivity rates (despite relatively low vaccination levels) and inflation remains below the BoU's 5% core target (though it will likely exceed it modestly in the coming months due to higher food and energy prices).

Macro forecasts have not been substantially revised since the October WEO given limited direct exposure to Russia and Ukraine, with the current account deficit still projected to contract slightly this year. A continued commitment to consolidation will put debt on a firm downward trajectory over the medium term, while reserve buffers remain comfortable at about four months of import. 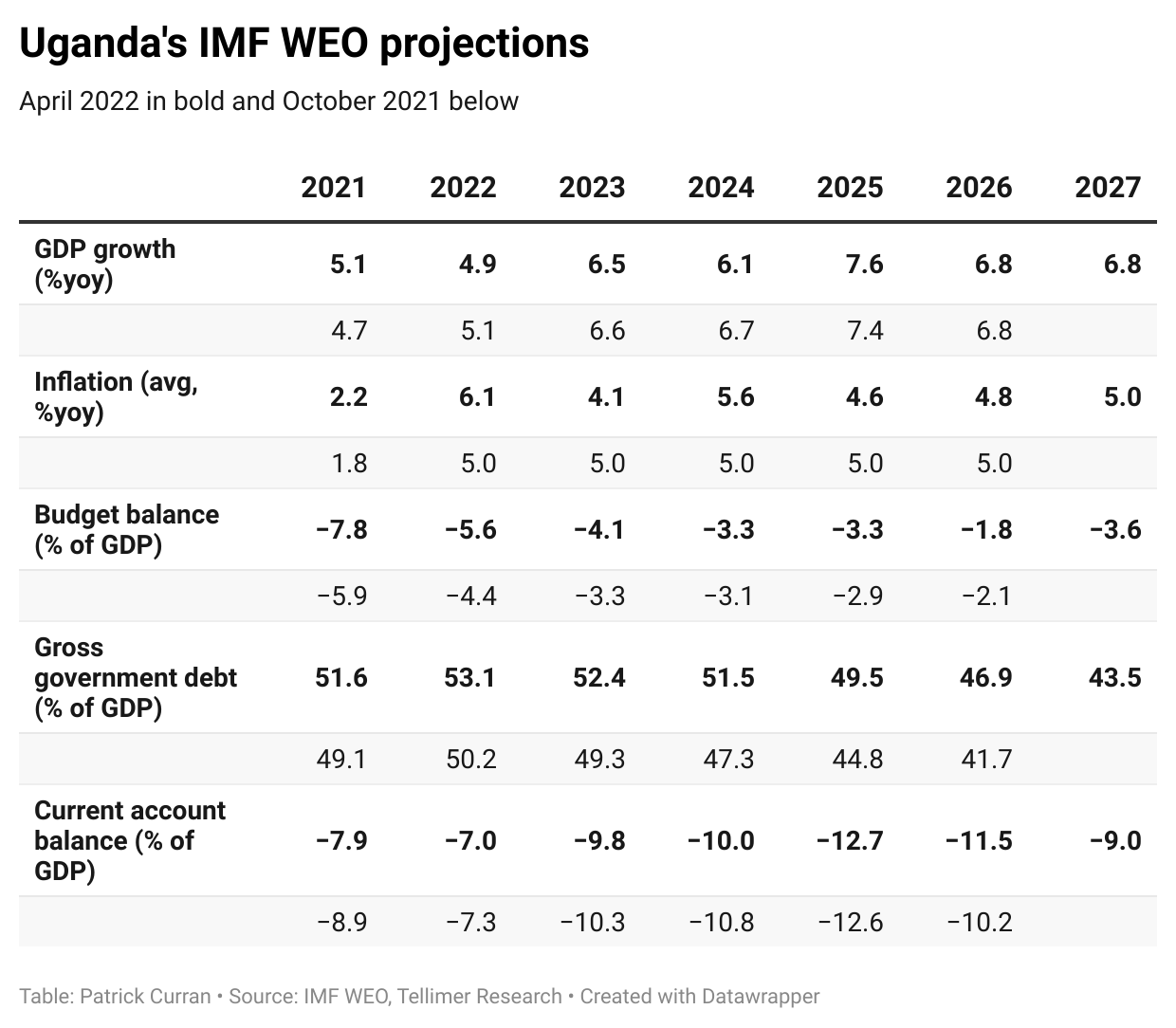 ECF reforms were heavily frontloaded, given some overdue reforms from the May 2020 RCF, with the second review carrying fewer but important measures. That said, urgent action is still needed to limit scarring from the pandemic, especially in the area of education given substantial school closures and the associated impact on learning.

While the IMF had argued for a more accommodative monetary policy stance in its March Article IV, the external backdrop has changed since then. With the share of government securities held by non-residents declining slightly to c10% at the end of 2021, exchange rate flexibility remains important.

The IMF assesses the exchange rate as modestly overvalued, but it is difficult to quantify given large uncertainties (the recent External Sector Assessment provided a range from 8% undervalued to 48% overvalued in 2021). The UGX has continued its relative stability this year, and direct intervention is likely lower than it was in Q4 21 (when the BoU purchased US$380mn of FX), despite the BoU's low tolerance for volatility.

The authorities have continued to meet their fiscal consolidation targets despite new spending needs, with revenue shortfalls offset by cuts to development spending. That said, better management of arrears and less reliance on supplementary budgeting is required to improve fiscal management.

The IMF assesses debt to be sustainable but with a moderate risk of distress stemming from rising debt service costs, with the Fund continuing to advise that external borrowing take place on a concessional basis. The authorities have not expressed any desire to tap the eurobond market, which the IMF agrees should be avoided given the relatively high cost of market financing.

Fiscal consolidation is also necessary to boost private sector credit growth, which remains below pre-Covid levels. The banking sector is well-capitalised with healthy buffers, but high risk aversion has caused banks to prefer government paper over private lending. While this has increased sovereign-bank linkages, there is little risk of resulting financial instability given low solvency risk and high buffers.

Growth is expected to pick up to around 6-7% over the medium term as oil production comes online, which is expected in FY 24/25 (with the FID signed in February). This will also cause the current account deficit to rise, though the increase will be funded by oil-related FDI and the non-oil current account balance will continue to fall. The legal and fiscal framework is being strengthened to ensure the proper management of oil revenue, with ongoing technical assistance on this front.

In the longer term, structural reforms will be required to maintain 6-7% growth, especially given scarring from the pandemic. This includes, among other things, increased spending on health and education. That said, Uganda's growth outlook will remain robust compared to many of its emerging market peers, even when excluding oil development, and its macro outlook is quite encouraging.

Against this backdrop, we maintain our Buy recommendation on 5yr and 10yr Ugandan government bonds. While shorter-term rates have fallen, rising price pressures will somewhat reduce Uganda's positive real rates, and monetary easing is no longer likely to support duration gains, with 5yr and 10yr bonds still yielding 13.5% versus inflation of 3.7% and the IMF's year-end inflation forecast of 6.4%, real yields of c7-10% are still attractive. 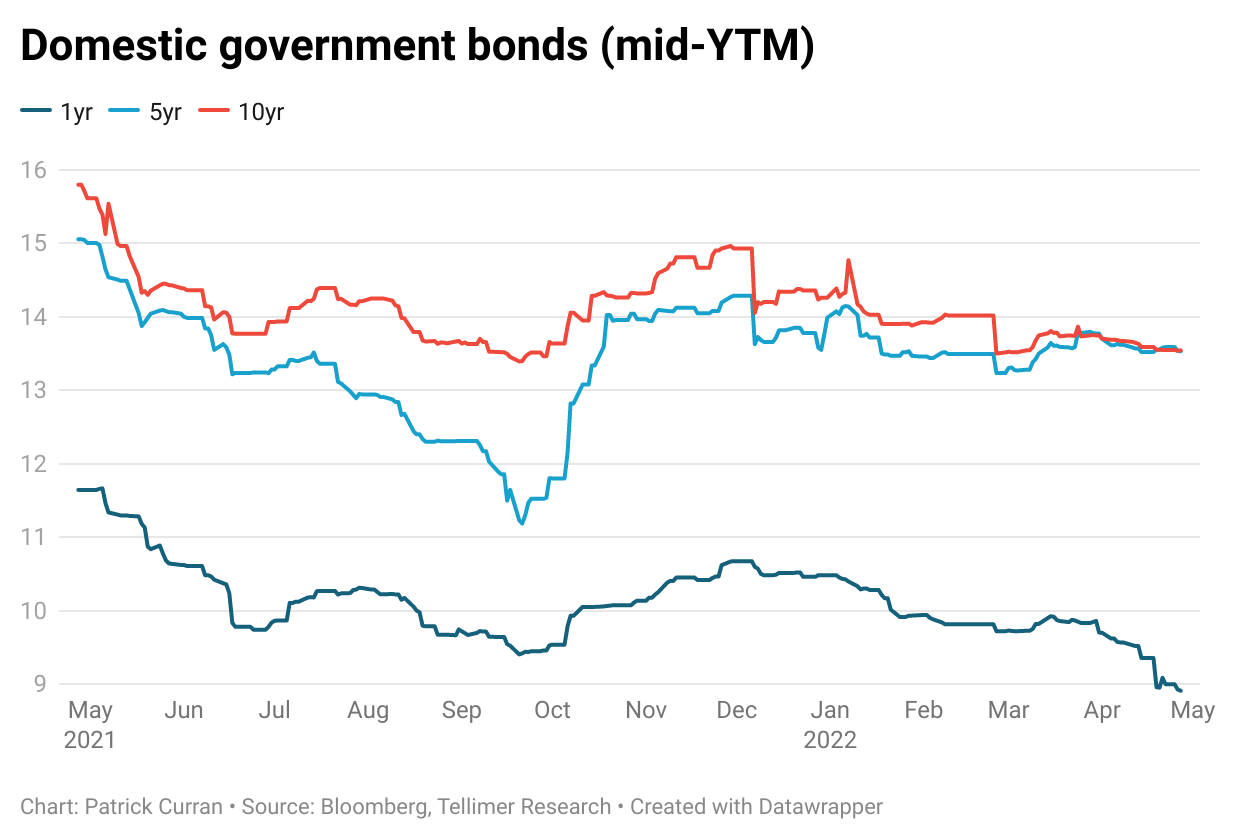 The key risks are currency overvaluation and capital flight, but an improving balance of payments outlook will continue to support the UGX and the currency has weathered this year's external shocks quite well. This suggests that foreign capital is somewhat sticky due either to liquidity constraints or the longer-term nature of holdings (with bonds making up c85% of the US$805mn of non-resident holdings at the end of 2021). As such, the risk of disorderly outflows appears to be contained.