The lira rollercoaster continues, with the TRY following last week’s 15.4% rout by initially falling another 10.6% versus the US$ on Monday morning before rebounding as much as 31.1% in the afternoon and closing the day up 24.1%. In today's trading, it initially rallied another 16.7% before dropping by 7.9%, and is up 2.5% at the timing of writing. This takes the two-day gain to 25.3% with a trading range of TRY 11.15 to 18.3 per US$, and fully reverses this month's substantial losses (though the lira is still down over 43% ytd). 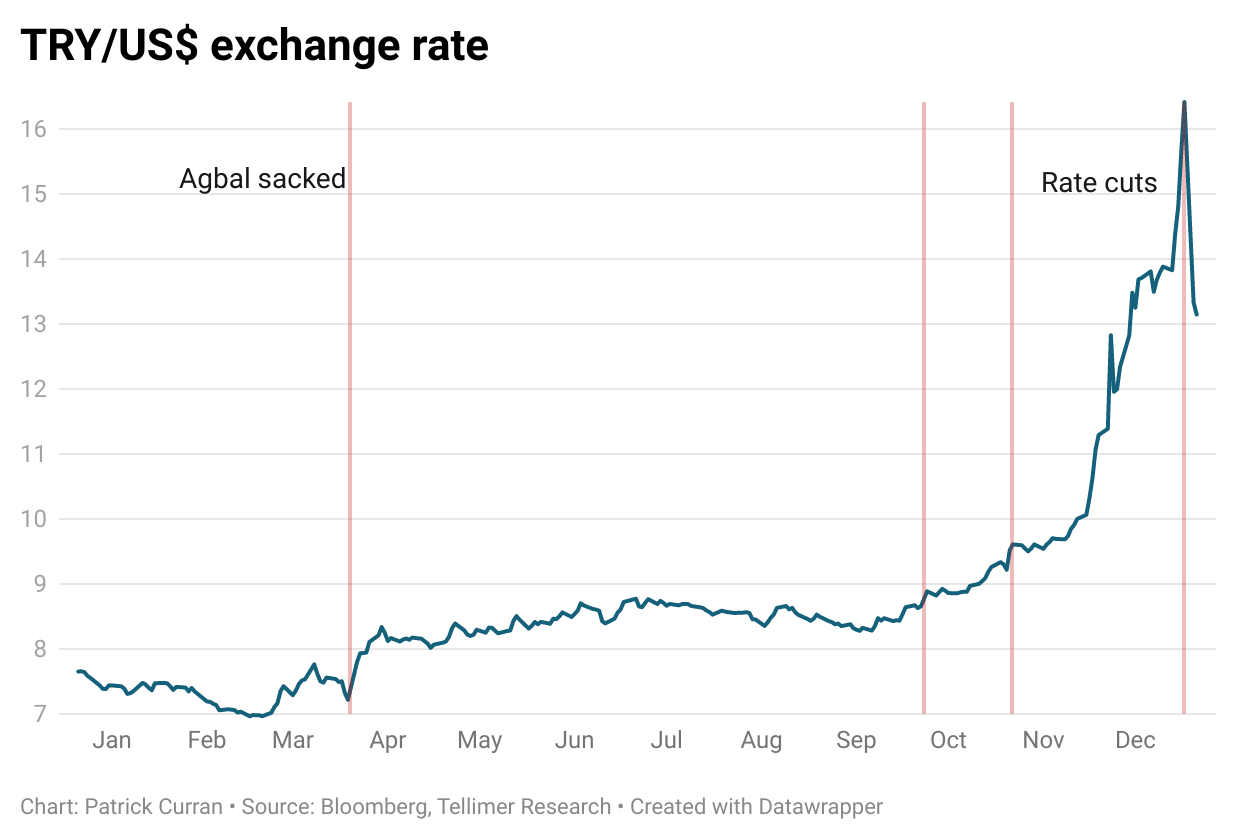 The cause of the initial selloff on Monday was further comments by President Erdogan in support of low rates, referring to Islamic teachings against usury, and saying that “we are lowering interest rates. Don’t expect anything else from me…there is no backing down.” This followed further interest rate cuts by the CBRT last week that sent the lira plummeting, and suggests that Erdogan is becoming increasingly entrenched in his insistence on low rates despite the currency collapse.

The sharp rebound, on the other hand, was triggered by the announcement of extraordinary measures to support the lira, including the introduction of a new programme to protect savings from currency fluctuations, offering NDFs to help exporters hedge FX risk, reducing the withholding tax for investments in government lira notes from 10 to 0%, and increasing the government match of private-sector pension contributions from 25% to 30%.

The key policy is a promise from the government to offset losses incurred by holders of lira deposits if currency losses exceed the interest earned on 3 to 12-month TRY-denominated time deposits, effectively turning them into hard currency deposits if lira depreciation exceeds the CBRT's 15% policy rate (although time deposit accounts are currently yielding about twice that). This effectively provides a free currency hedge to domestic savers.

The Treasury explained that the "exchange rate difference will be deposited to client’s account in liras, in case the difference is greater than the lira deposit rate at end of maturity." If money is withdrawn before maturity "the right to interest will be terminated."

The effectiveness of this policy will depend on the extent to which it is seen as a credible commitment, helping to reverse the surge in dollarisation by residents in recent months. If it is not seen as credible, then depositors may continue to switch their deposits into FX, out of the banking system, or into gold to hedge against TRY depreciation (see below).

On the other hand, any compensation offered as a part of the scheme will likely come at a direct or indirect fiscal cost to the government, so if Turks buy into the policy and there is an influx of liras into time deposit accounts it could impose a significant quasi-fiscal cost on the government if lira depreciation continues at its recent pace (this week's appreciation notwithstanding).

Without more clarity on these issues, this week's sharp currency rebound looks to us like another overreaction, likely exacerbated by thin year-end liquidity. However, with the lira overreacting on the downside over the past month, the currency could just be reversing some of the previous overshooting. It remains to be seen how the TRY will move in the weeks ahead as markets try to make sense of this new policy and gauge the credibility of the government’s promises to support the TRY.

We recently highlighted how Erdogan’s unhealthy obsession with low interest rates could cause a domestic crisis of confidence, leading to increased dollarisation and/or flight of deposits from the banking system (as we saw in 2018) and a surge in gold imports (as we saw in 2020) as residents stash money under their mattresses and hedge against further TRY depreciation. And indeed, that risk has materialised of late, with the dollarisation rate rising from c53% to c63% in recent months on a sharp drop in resident TRY deposits (albeit due entirely to valuation effects, with stable FX deposits). 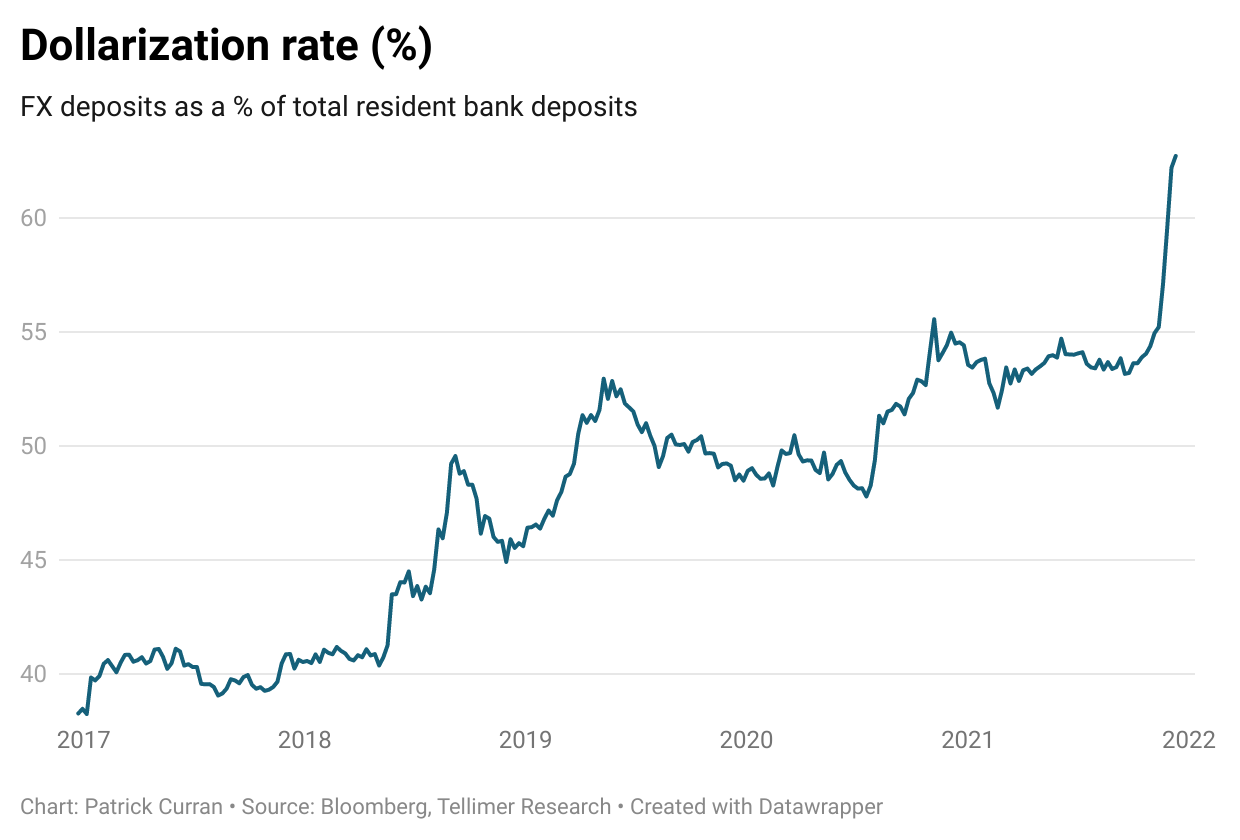 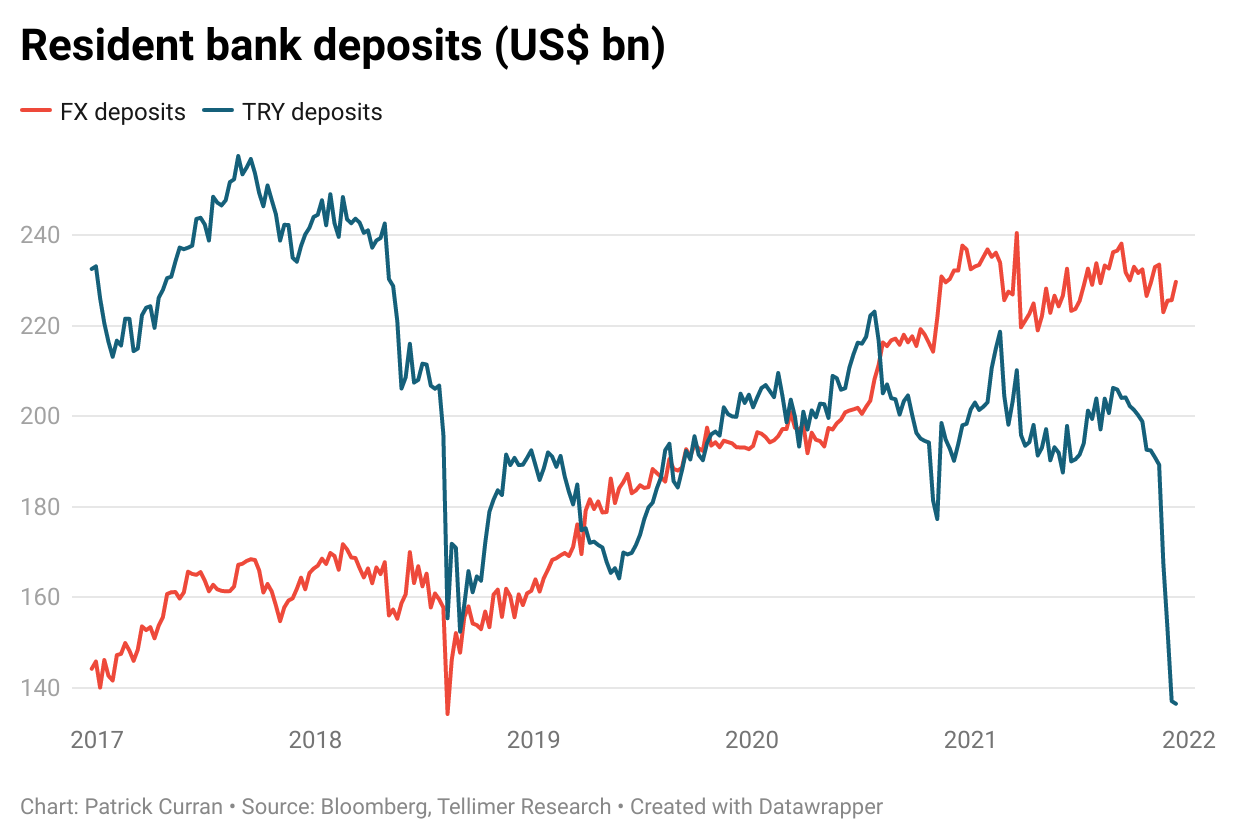 While foreign confidence in the lira has also collapsed, this is less important from a BOP perspective, given a historically low stock of non-resident holdings of domestic government debt and equities. And indeed, foreign outflows have been limited in recent weeks, despite the historic collapse of the lira. As such, the focus will continue to be on the behaviour of Turks, and it will be interesting to see whether non-monetary gold imports spike in November as we saw during 2020, and whether today’s measures by the government will be sufficiently credible to boost residents' demand for liras. 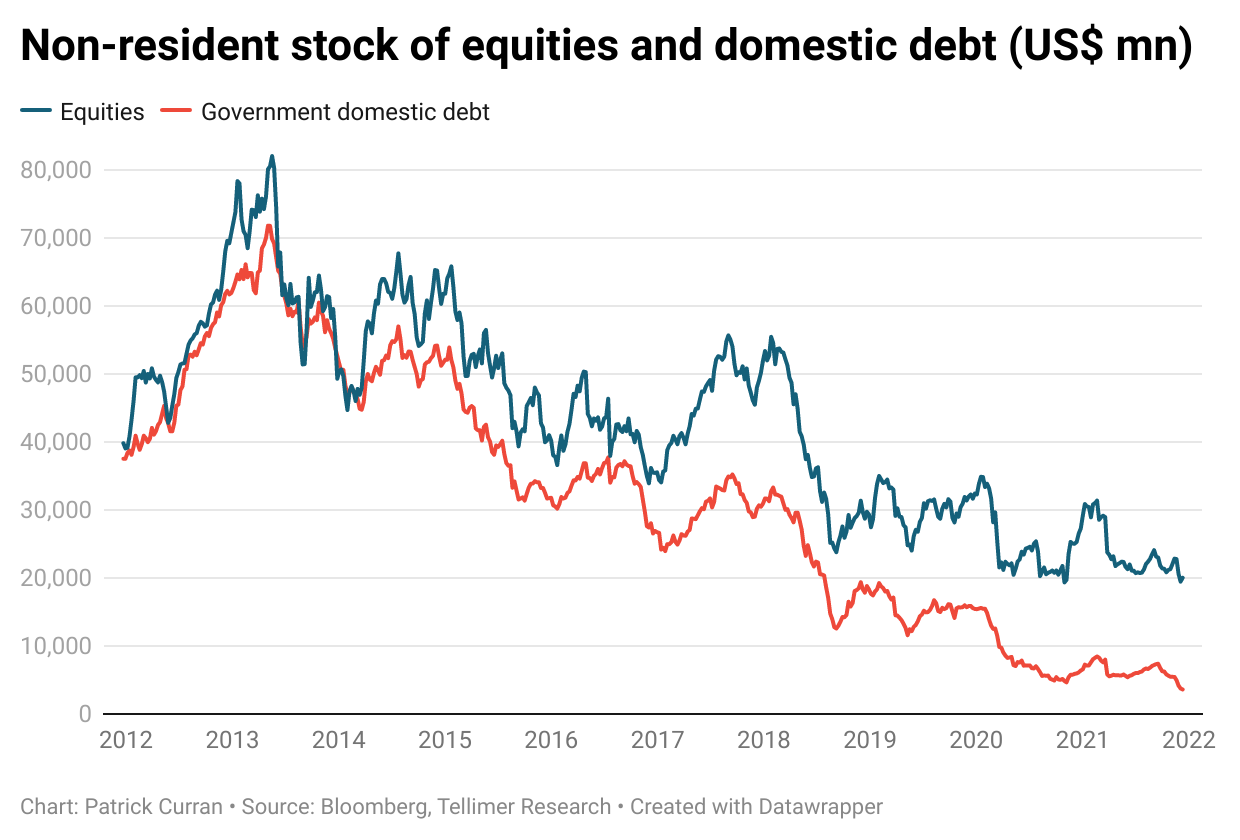 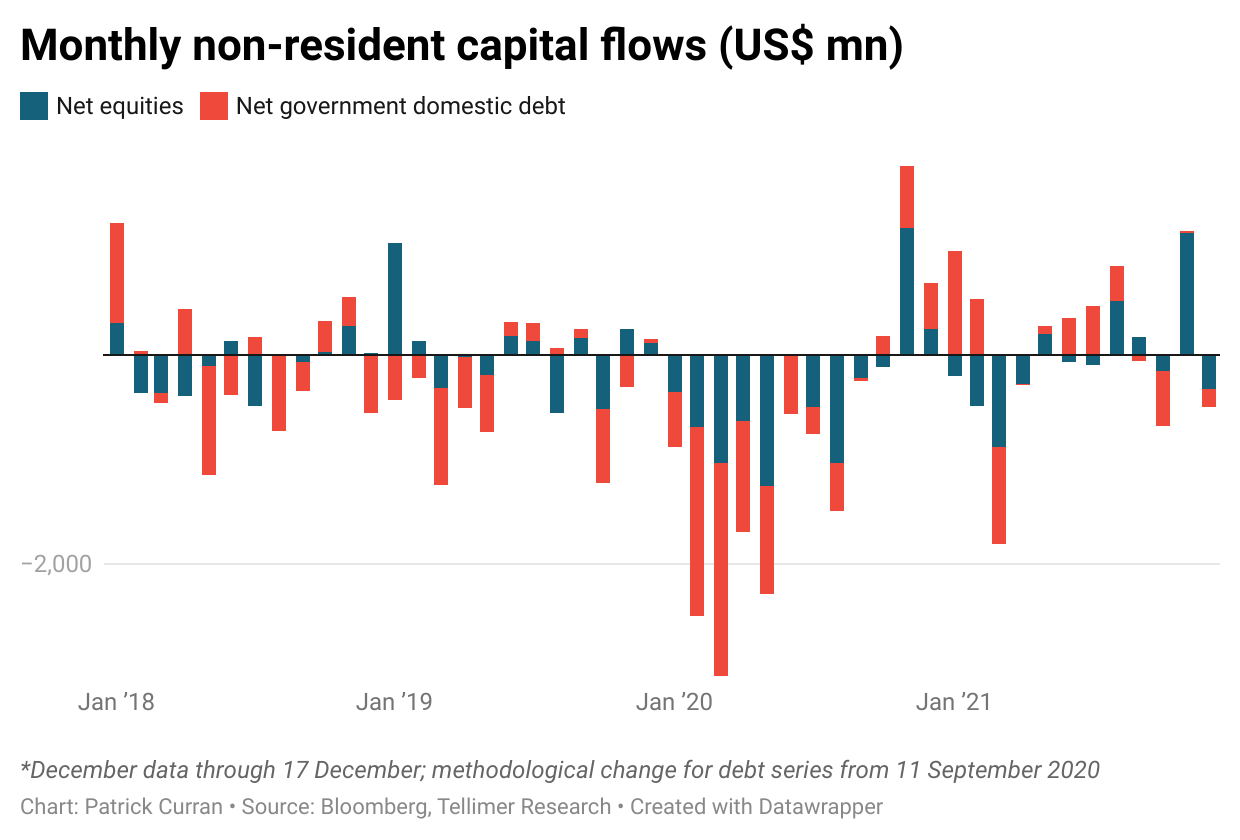 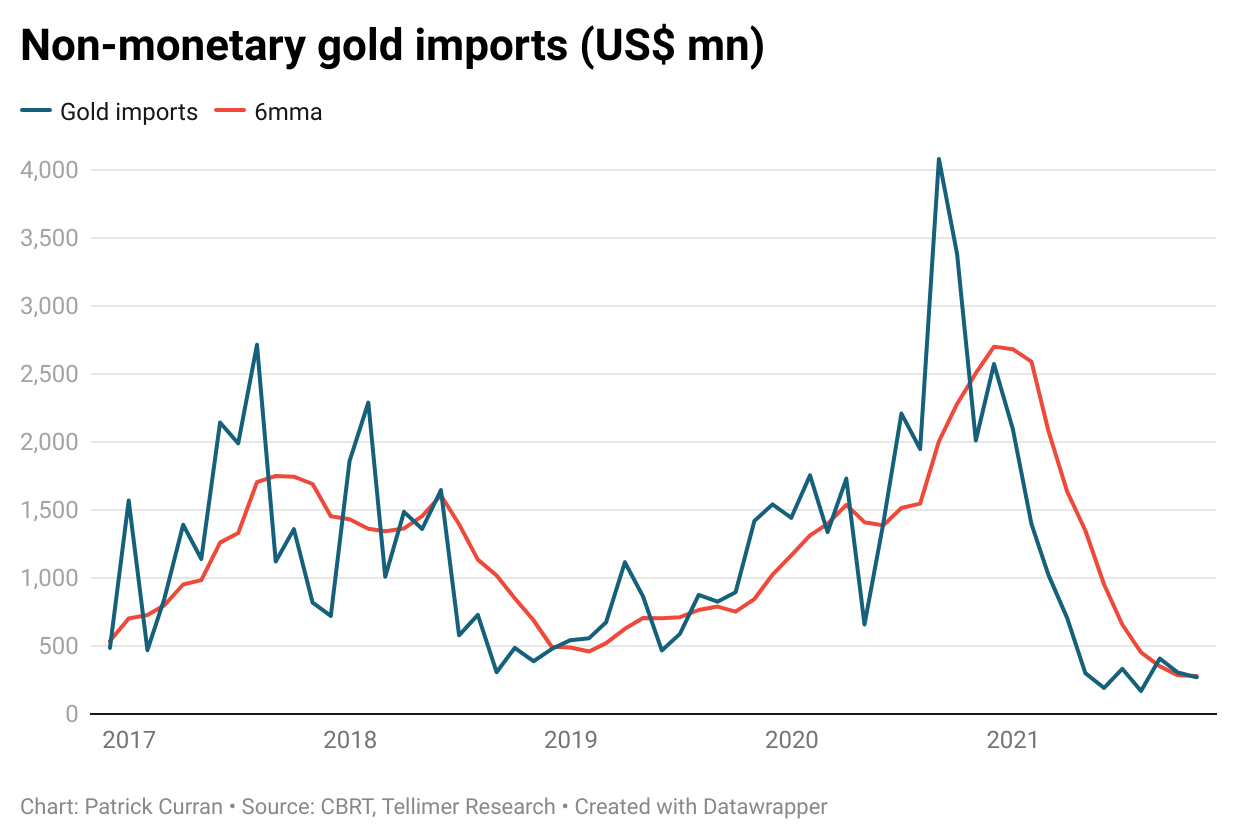 However, the market distortions and potential quasi-fiscal costs of this policy may undermine Turkey’s creditworthiness, with the 5-year CDS spread more than doubling since February to over 600bps at the time of writing. Ahead of the mid-2023 elections, Erdogan could rely increasingly on distortionary policies to offset the impact of the lira depreciation and high inflation. The recent 50% minimum wage hike and exemption of all minimum wage employees from income taxes is one such example, eroding the competitiveness gains that Erdogan has touted from the currency collapse and weighing on the budget.

Heading into thin holiday trading, there is really no telling where the lira will end the year. Depreciation had clearly overshot fundamentals, but Erdogan’s increasingly dogged insistence on low interest rates will keep it under pressure. And while the history of currency crises is littered with examples of capital controls or other measures designed to protect the currency, we are not aware of any specifically like those Turkey announced yesterday, and experience suggests they may only help to stabilise the lira in the near-term absent a credible monetary policy framework.

There are also sure to be unintended consequences to this new policy, in addition to the likely impact on the budget if/when lira depreciation triggers payments. Support of the TRY could therefore come at the cost of further undermining Turkey’s credit profile, and only an aggressive tightening of monetary policy can support the lira in a sustained way. Against this backdrop, we maintain our Sell recommendation on the TRY and expect further volatility in the coming weeks as markets unpack the lira’s wild fluctuations and assess the ability of the government to intervene to support the currency and associated tradeoffs.

Turkish equities (Borsa Istanbul 100 index) are down almost 40% ytd and just over 10% mtd in US$ total return terms.

In one respect, Turkey should be of little importance for foreign institutional equity investors; the country’s weight in the MSCI EM index is merely 20bps (which positions it between Greece and Peru) and it sits outside the top twenty markets in EM. Ten years ago Turkey’s weight was 1.26% and five years ago it was 1.04%.

However, Turkey’s average daily value traded is very high, close to US$2bn over the last 6 months, placing it in 8th position in terms of global EM equity markets, above, for example, Saudi, South Africa, and Russia.

As with other markets where the macroeconomic policy environment is dysfunctional – eg Argentina, Lebanon, Nigeria, and Zimbabwe – equities in Turkey, particularly those driven by exports, have provided a partial hedge for extreme inflation and currency pressure, for local investors. Therefore, the valuation of equities does not appear as distressed as one might assume.

However, when the economic crisis becomes severe enough to bring into question the competitiveness of future operating costs, following the minimum wage hike (which directly impacts 40% of the country’s workforce), or tax rates, in order to fund any government economic support measures, then, even for export-oriented corporates, this partial hedge breaks down.

Any reversal from a foreign investor perspective needs to start with stabilisation and recovery of the currency – equity valuation, on its own, is not sufficient to provide a positive trigger.