In the past few months, Nigeria and Ghana – two of the biggest West African economies – have been in the news for less than satisfactory reasons and this week is no exception for both countries.

In Nigeria, the federal government spending 119% of actual revenue on debt service has raised debt sustainability concerns, while the naira has been in freefall in the parallel market. We doubt anything meaningful will be done about it, at least until a new government is elected in 2023.

Ghana's government has lowered its 2022 deficit forecast, but the improvement is coming entirely from higher nominal GDP due to inflation rather than fiscal cuts. Our fixed income team cautions against reading too much into the lower deficit target.

Both Nigeria and Ghana are also on a watchlist of high inflation countries that should adopt hyperinflation accounting.

Last week, Nigeria's Minister of finance presented the medium-term expenditure framework for 2023-2025. The presentation included the revenue and expenditure performance of the federal government for January-April 2022. One noteworthy development is that the federal government spent 119% of actual revenue on debt service, raising concerns about Nigeria's debt sustainability. 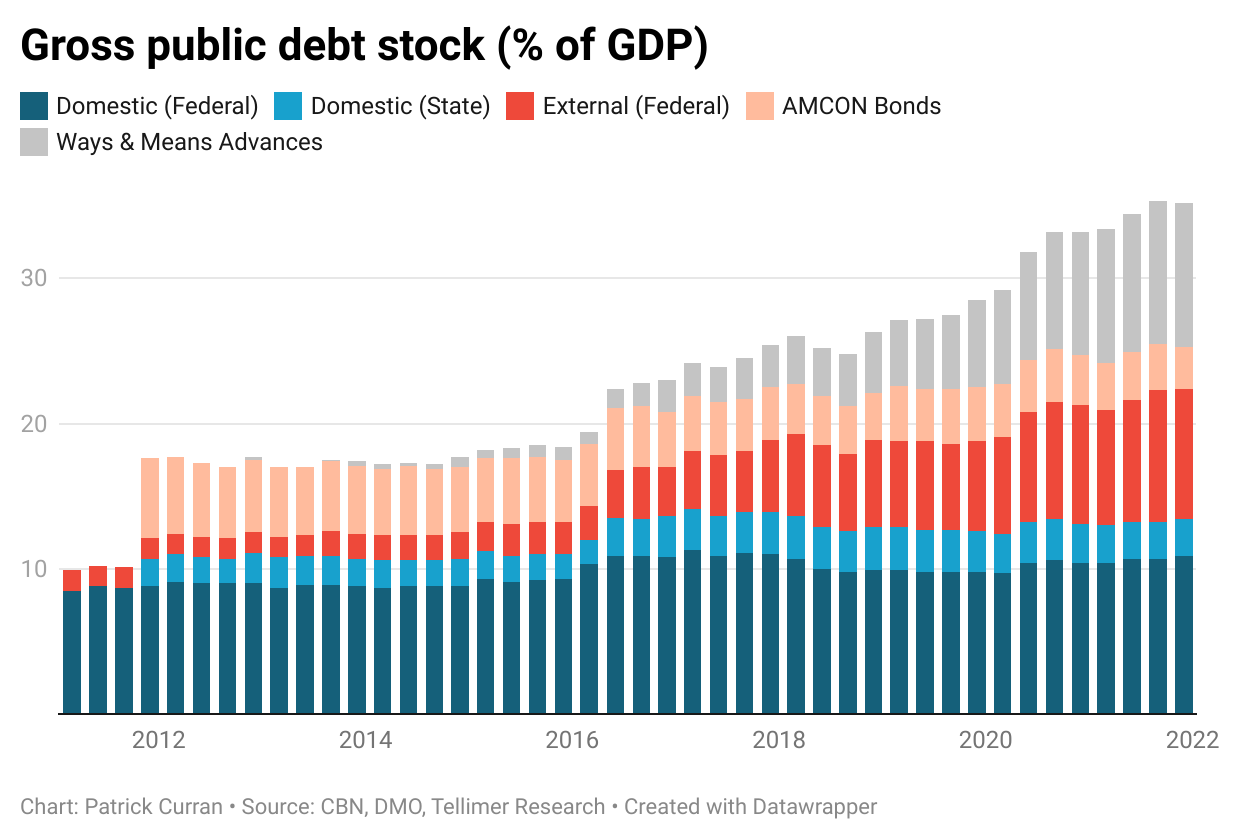 But, while the government aims to triple revenue collection to 15% of GDP by 2025, which doesn't stand out as being exceptionally high relative to EM or African peers, there are only a few concrete measures to achieve such a target, and non-oil revenue will likely remain subdued absent significant reforms. It is also important to note that corruption and some irresponsible spending contribute to the state of the government account as it is.

The factors driving the naira's collapse on the parallel market 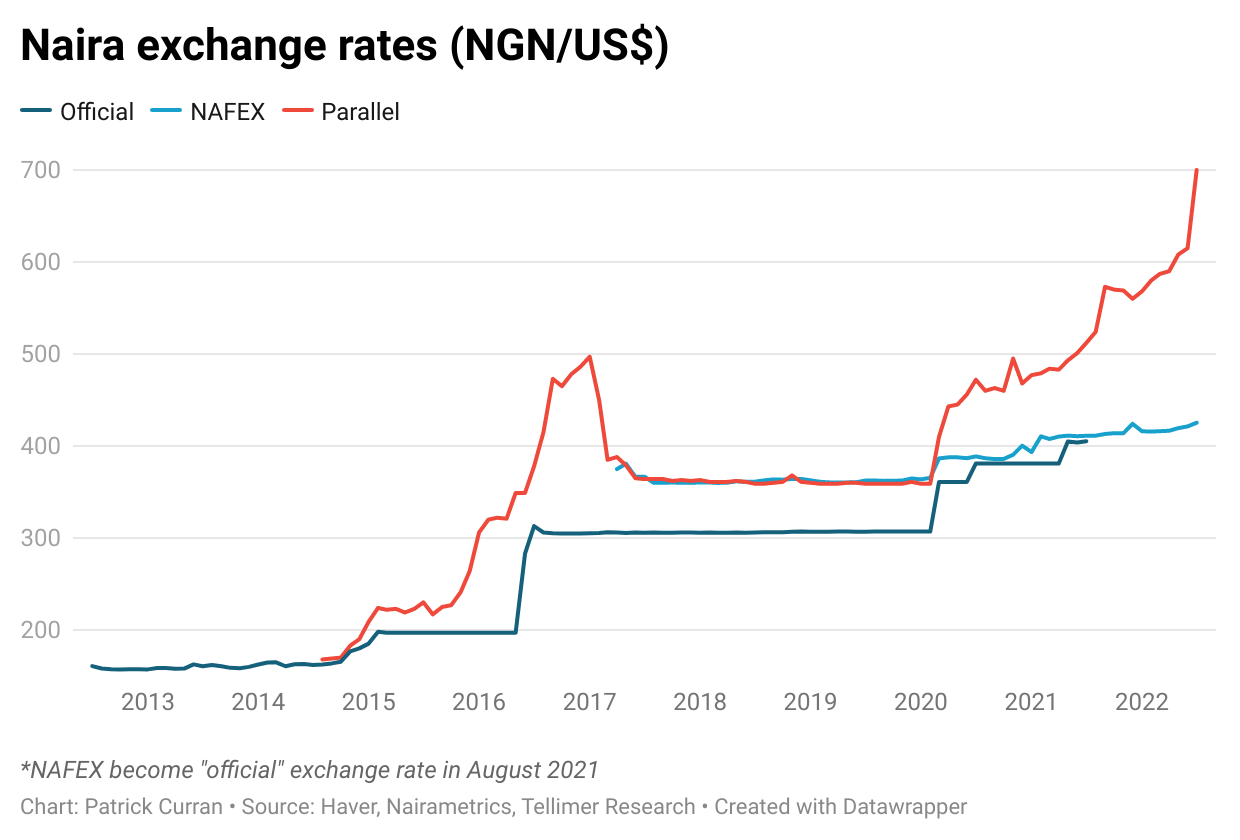 Explanations include higher FX demand for school fees and campaigning, rising money supply, and panic buying. Of course, it is difficult to say where the parallel exchange rate will go in the coming months. Perhaps the market dislocations will finally force the Central Bank of Nigeria (CBN)'s hand and prompt them to move towards a more flexible exchange rate. Still, we have little confidence that the CBN is willing to do what it takes to balance the market and, against this backdrop, think more parallel market volatility is in store. Click here for the full report.

Ghana presented its much-anticipated mid-year budget review this week, delayed from earlier this month after the authorities announced their intention to seek an IMF programme. However, as we noted before, although it is another milestone, we struggled to see what it could usefully add after barely three weeks of talks with the Fund.

The main headline is that the government has lowered its 2022 deficit forecast to 6.6% of GDP from 7.4% in its mid-year budget review. However, the improvement comes entirely from higher nominal GDP due to inflation rather than fiscal cuts. Hence, we caution against reading too much into the lower deficit target; much still depends on the IMF's assessment. Click here for the full report.

High inflation poses a risk to investors because it heightens currency risk and impacts the leverage and profitability of businesses. Therefore, to have a meaningful understanding of a business' financial position in a highly inflationary environment, IAS29 recommends hyperinflation accounting. 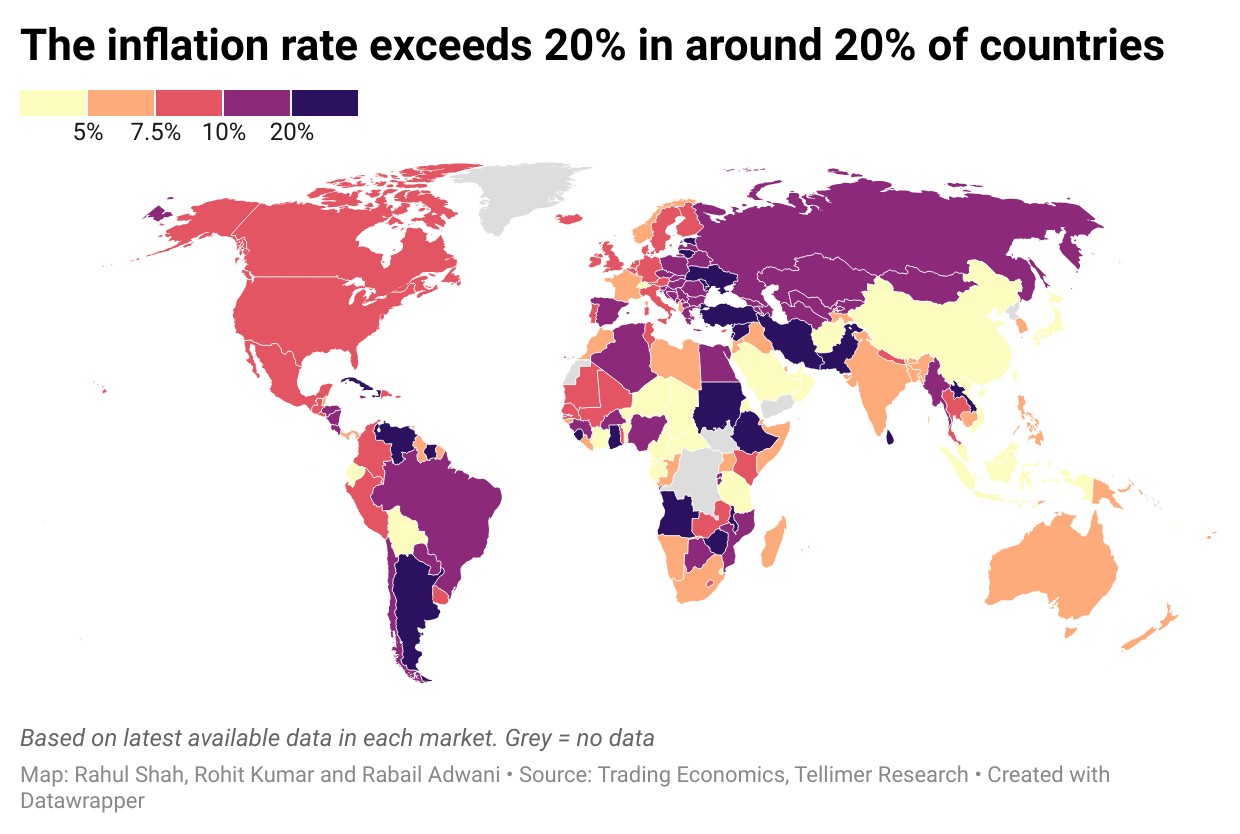 So far this year, the IPTF (International Practices Task Force) of the Centre for Audit Quality (CAQ) has indicated that Ethiopia and Turkey should adopt hyperinflation accounting. Looking at the current crop of high inflation countries, in West Africa, Ghana and Nigeria require some monitoring – both countries have recorded inflation rates of 29.8% and 18.6%, respectively.

In line with provisions in the Petroleum Industry Act, Nigeria's state oil firm, the Nigerian National Petroleum Company (NNPC), has been commercialised to NNPC Limited. The company explores, produces, refines oil, and markets and retails petroleum products. With the recent commercialisation, the NNPC will now operate as a business entity and not just a government agency. While the government remains the sole owner of the entity, the business will run as a profit organisation. NNPCL plans to go private by listing on the stock exchange eventually.

NNPC declared a rare profit in its 2020 financials (the latest one available), but a closer look revealed that the profit was not driven by sustainable fundamentals, rather by factors such as impairment loss reversals, among other things. That said, the NNPC's Group Chief Executive Officer expects to have more profit-driven measures for the firm including charges for services offered to the government.

Last week, fuel distributors in Nigeria hiked petrol prices after a dispute over unpaid funds by the government was not settled. Prices were increased at petrol pumps from the nameplate NGN165/litre that was fixed by the regulator to around NGN170-NGN190 across the country.

Interestingly, the regulators appear to have given a silent nod to the price hike, as there have been no punitive measures so far. And perhaps understandably so as fuel distributors have struggled with thin margins on petrol sale.

Fuel distributors are calling for the deregulation of the sector and the removal of subsidies, but the government has not budged – we think the government is clearly making more socio-friendly policies ahead of the 2023 elections. This comes despite the heaping costs of subsidies on the government's purse.

Senegal's parliamentary elections are scheduled to be held on 31 July 2022, six months after local polls, which saw the ruling party defeated by the opposition.

The Nigerian market recorded a loss in the last week, with the all share index declining by 3.83%. As we have previously predicted, the increasing fixed income yield has triggered some sell-off in the equities market. In addition, the recent rapid devaluation of the naira on the parallel market might have spurred the sell down of Nigerian equities.

Looking ahead, we believe that higher yields in the fixed income market will dampen the case for investment in Nigerian equities. 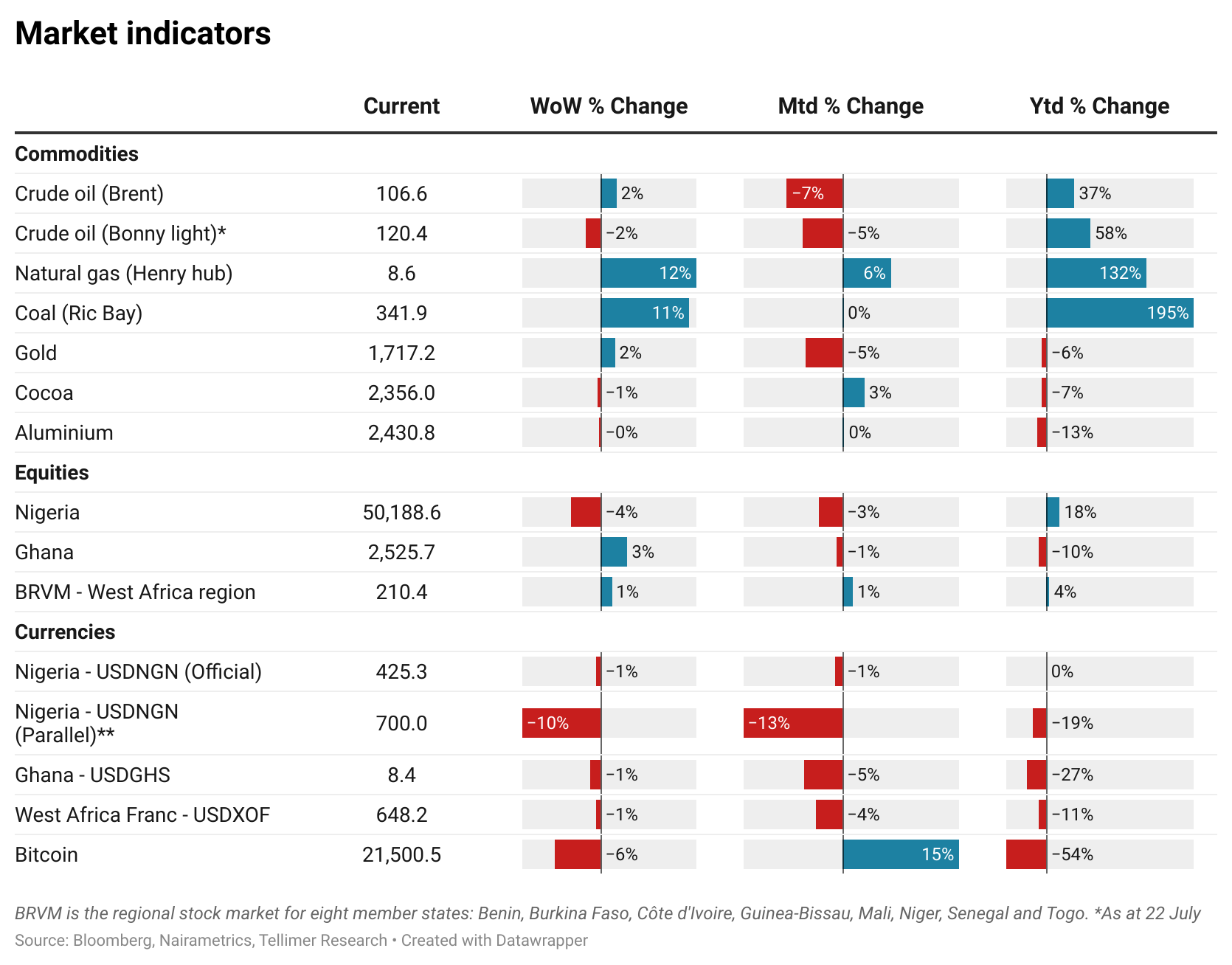 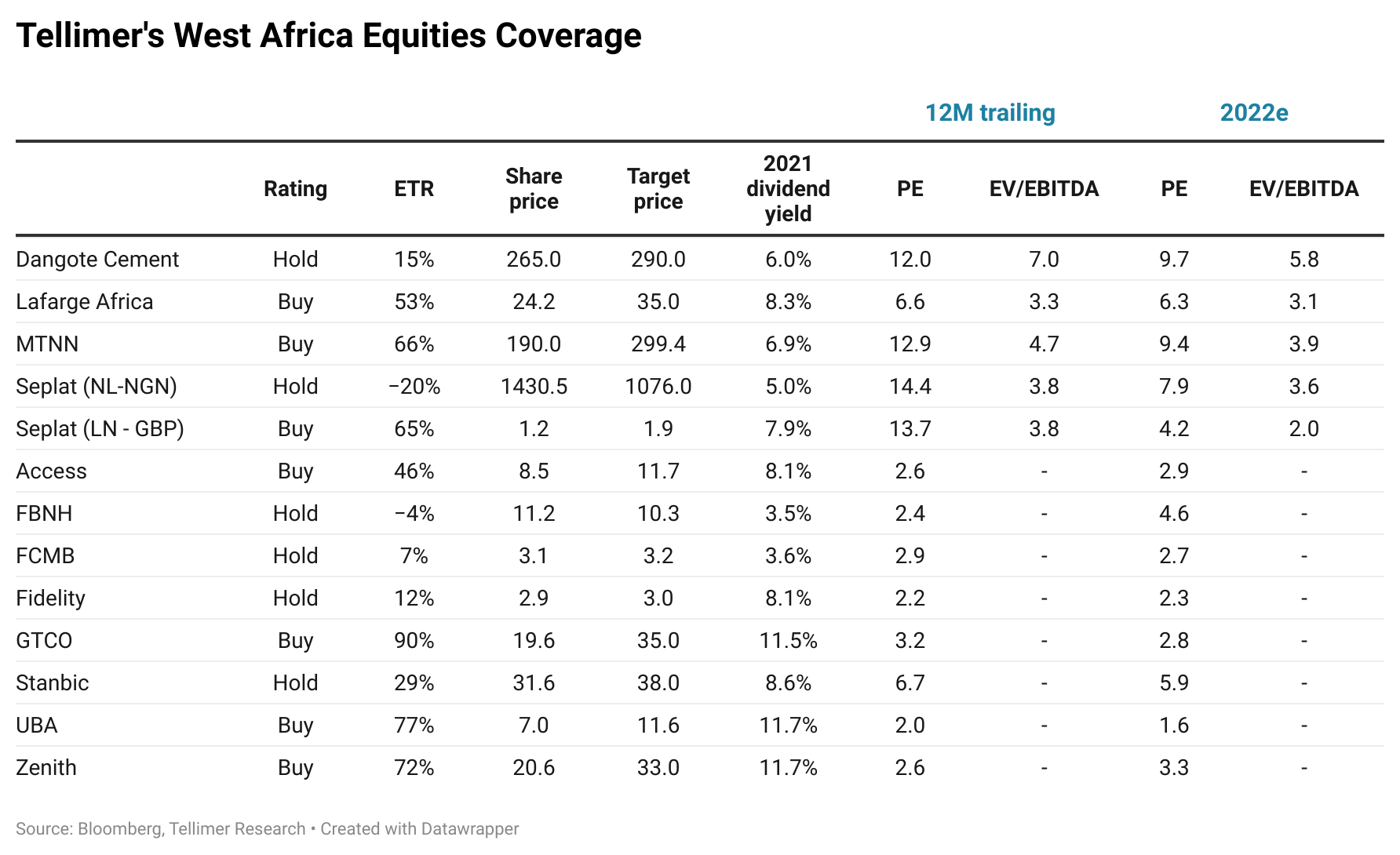 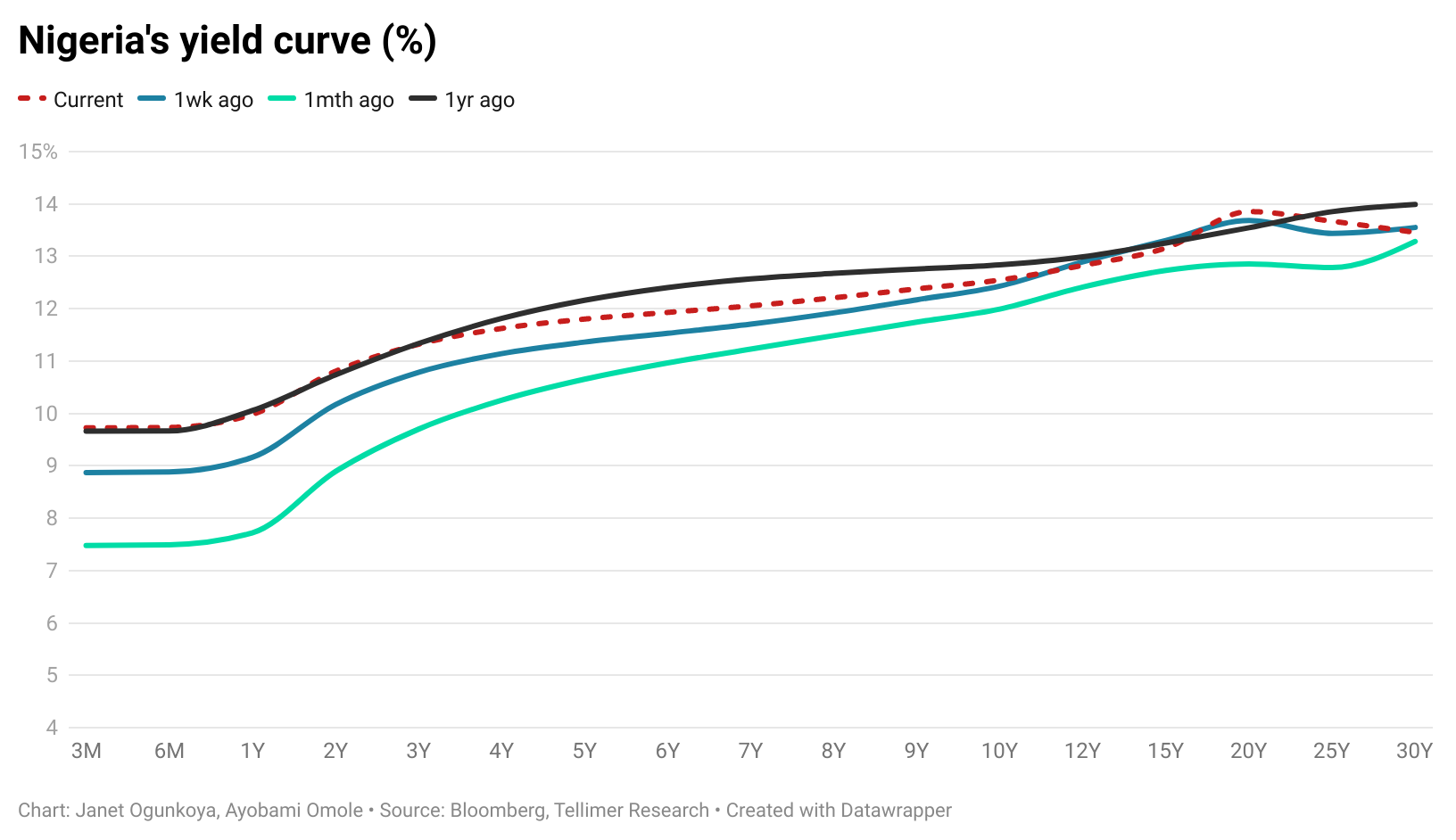 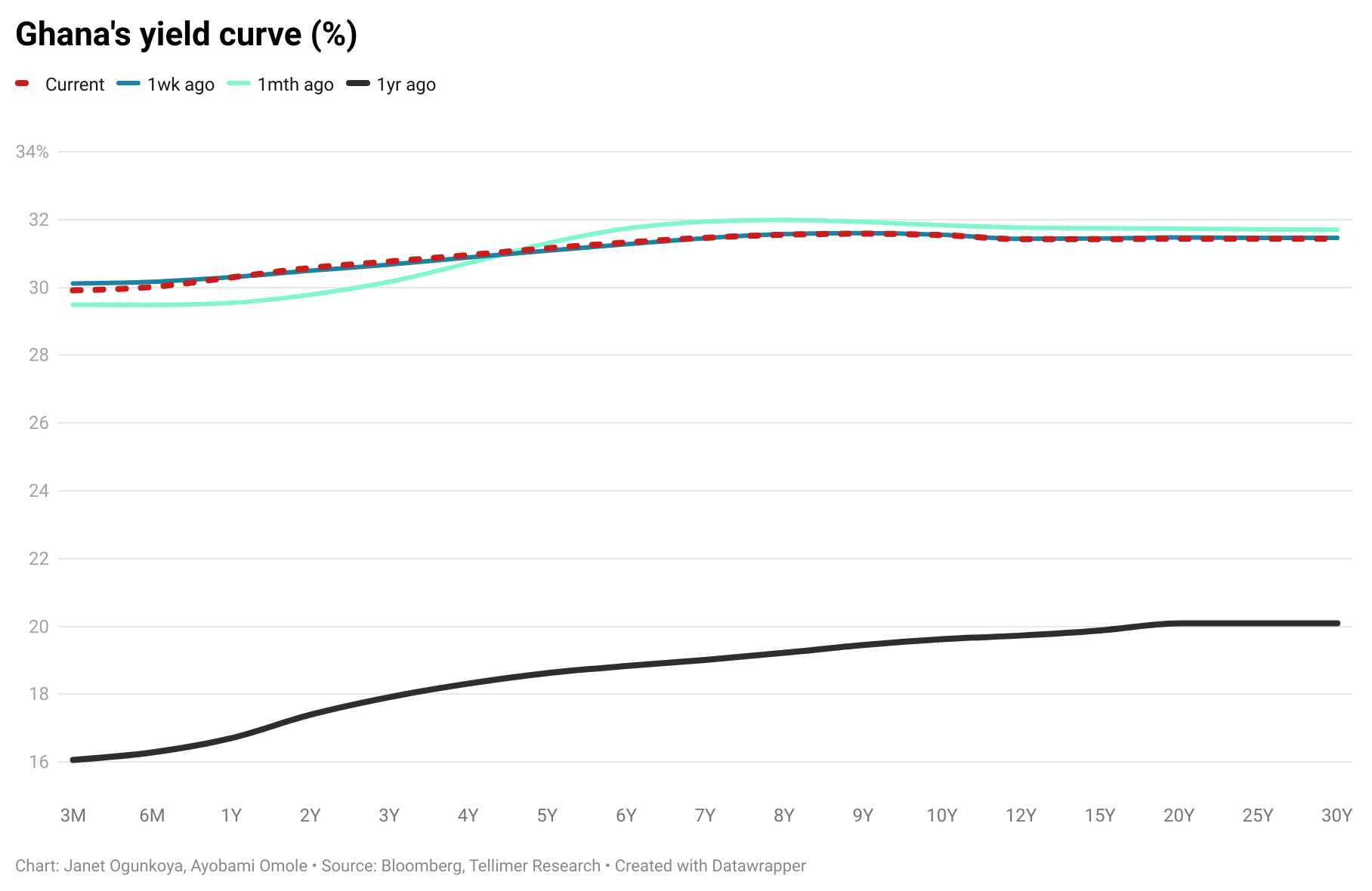