Taper tantrum avoided, but sticky inflation may cause tightening tantrum in 2022

With the Fed beginning to taper asset purchases in November 2021 at a monthly pace of US$15bn (US$10bn Treasuries and US$5bn MBS), and rates nonetheless settling near or below pre-pandemic levels in recent weeks after rising since late-summer, it seems the Fed has been able to engineer a relatively soft landing from its taper of asset purchases. 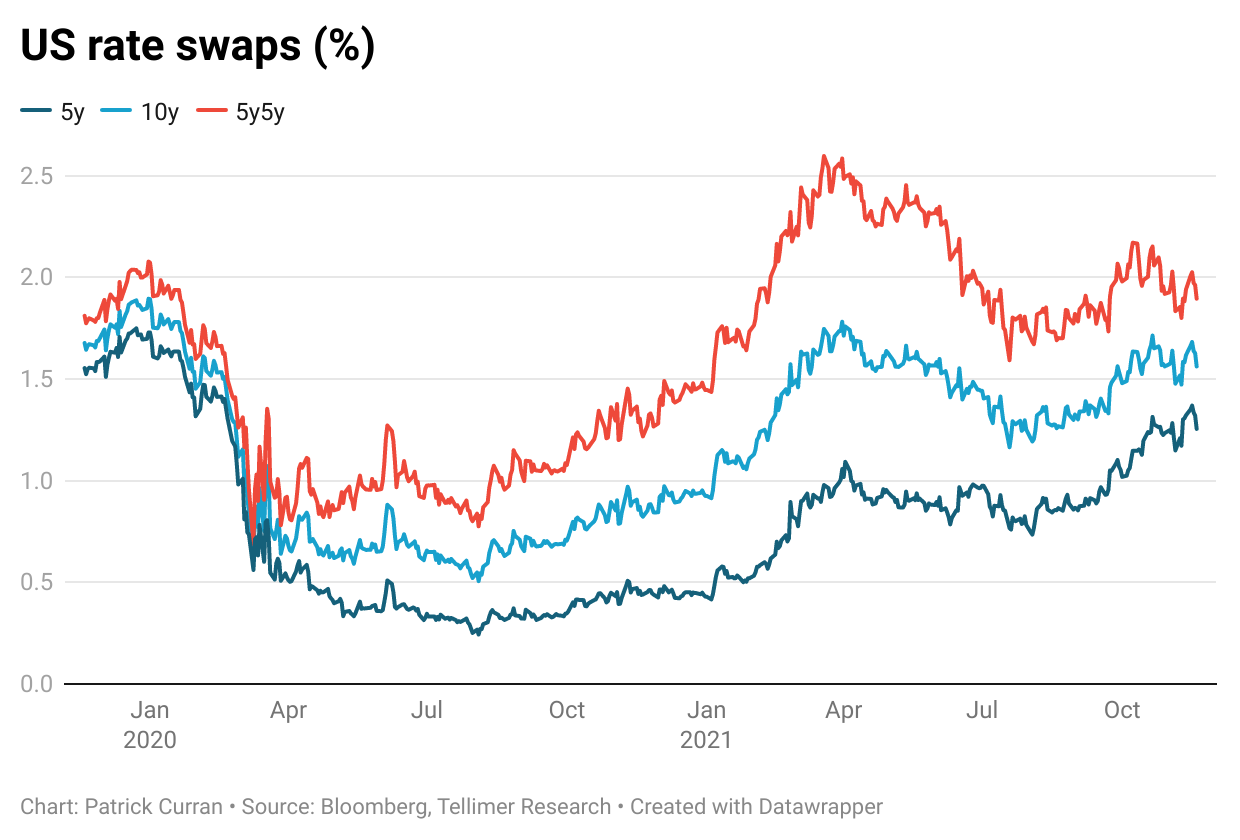 Against this backdrop EM assets have traded relatively flat this year, with the MSCI EM Currency Index up by 0.7% and the JP Morgan EMBI down by 1.7% in total return terms. While underwhelming, the weakness has been relatively mild compared to the 2013 taper tantrum (when the MSCI and EMBI sold off by c5% and c12%, respectively, from May 2013 peak to June 2013 trough, albeit with a full recovery by mid-2014), so fears of a “taper tantrum 2.0” have proved largely unfounded. Indeed, the spread on the EMBI Global is unchanged ytd at 323bps and sits just c45bps above its pre-Covid trough.

That said, we recently pointed to increasing concerns that the so-called transitory rise in inflation may turn out to be stickier than originally anticipated, which could push central banks in developed markets (DM) to hike rates sooner and more aggressively than currently planned. While the initial tantrum has seemingly been avoided, the focus will now shift towards the timing and pace of DM rate hikes, which will present another potential opportunity for EM assets, especially those denominated in local currency, to throw a “tightening tantrum” as we move into 2022.

As the IMF said in its April WEO, rising DM rates need not be negative for EM assets. While an unexpected signal of higher future DM policy rates that is not driven by changes in economic conditions (eg a hawkish shift in the reaction function of DM central banks) would lead to tighter financial conditions in EM, DM rate increases based on upside surprises to economic or vaccine data, or inflation expectations, should have a relatively benign impact on EM financial conditions.

The rise in 10-year US rates ytd appears to be driven mainly by rising inflation expectations, with real rates holding near record-low levels of -1.1%, which may help to explain the relative stability among EM assets as the Fed starts to taper. 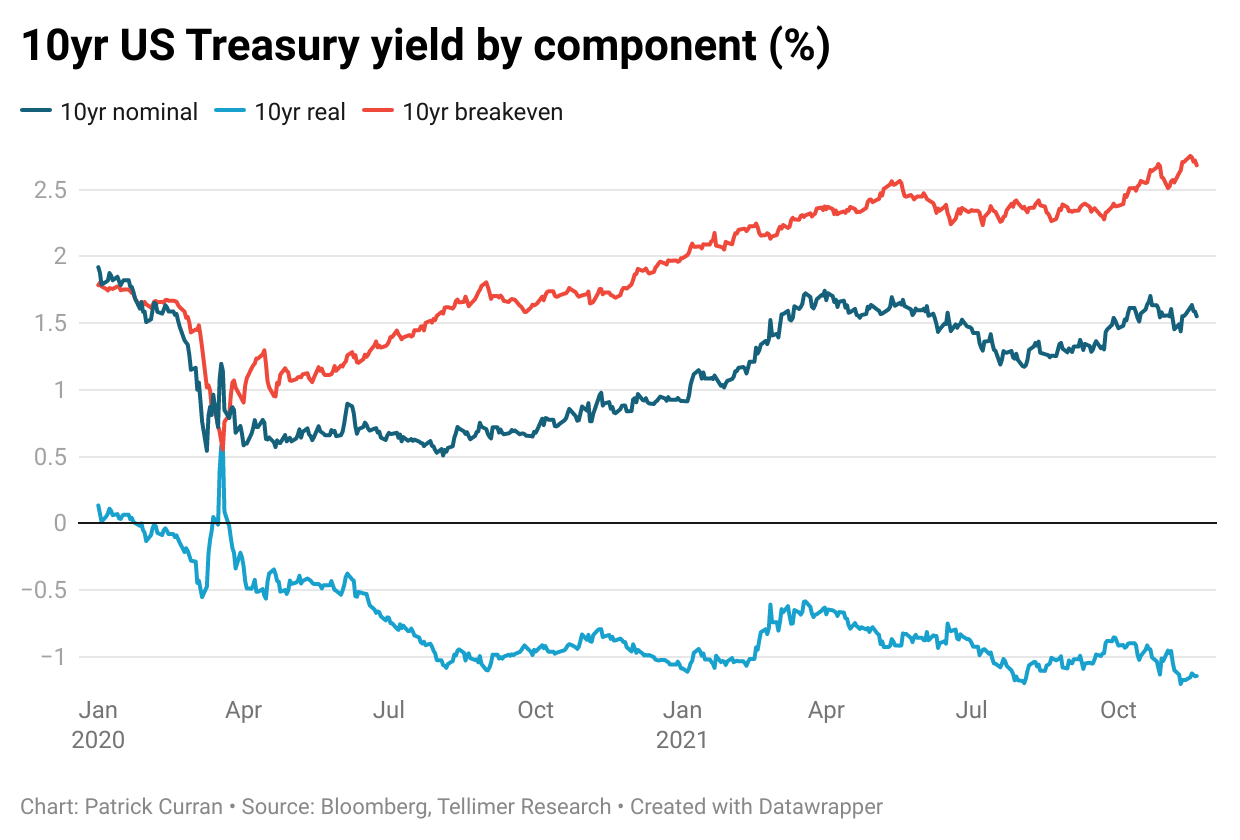 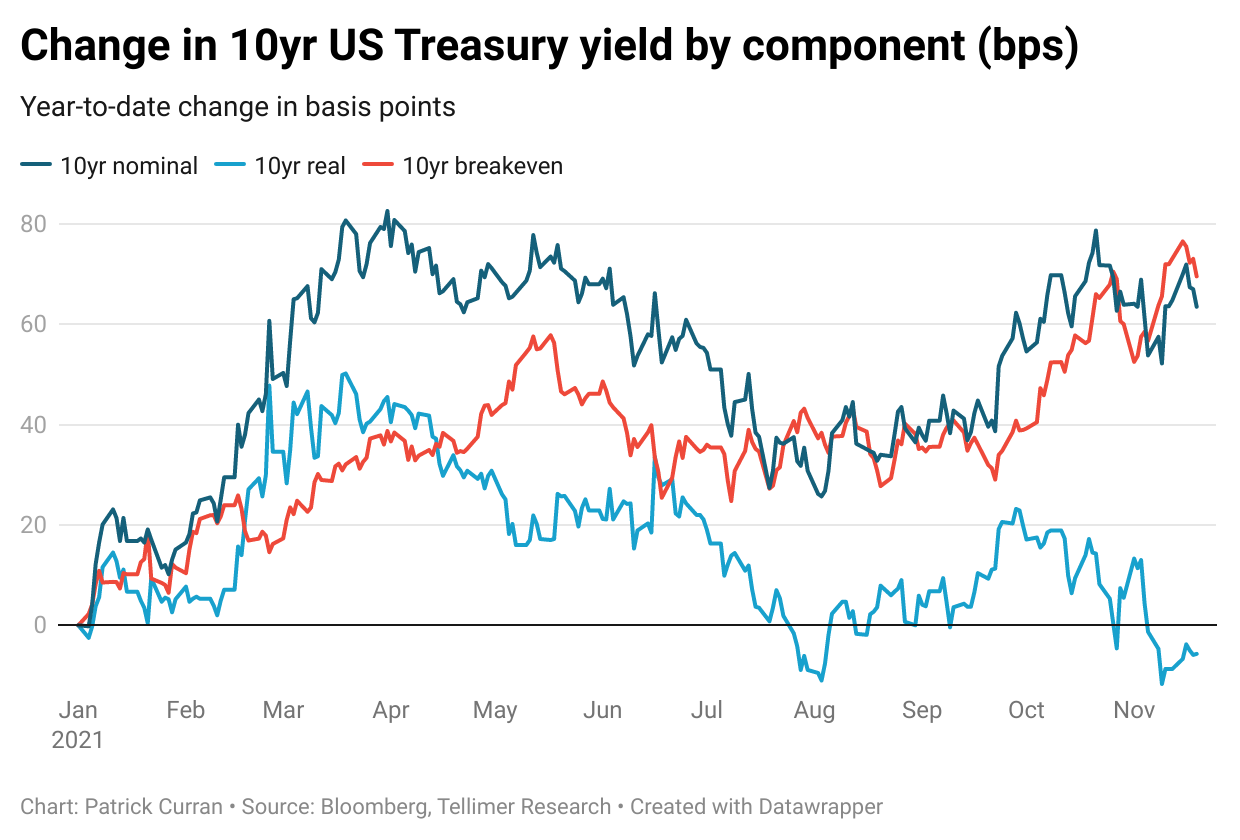 That said, if sticky DM inflation passes through to EM, there is a greater risk of inflation expectations becoming unanchored in EM given the lower (albeit vastly improved) level of credibility among EM central banks relative to their DM counterparts.

This could lead to a sell-off for EM assets, which is typical of global inflation episodes. One mitigating factor is a rising real interest rate differential between EM and DM, with many EM central banks hiking proactively. Another is lower current account deficits and non-resident holdings of domestic government debt in many larger EMs, reducing external financing needs and the risk of capital outflows. 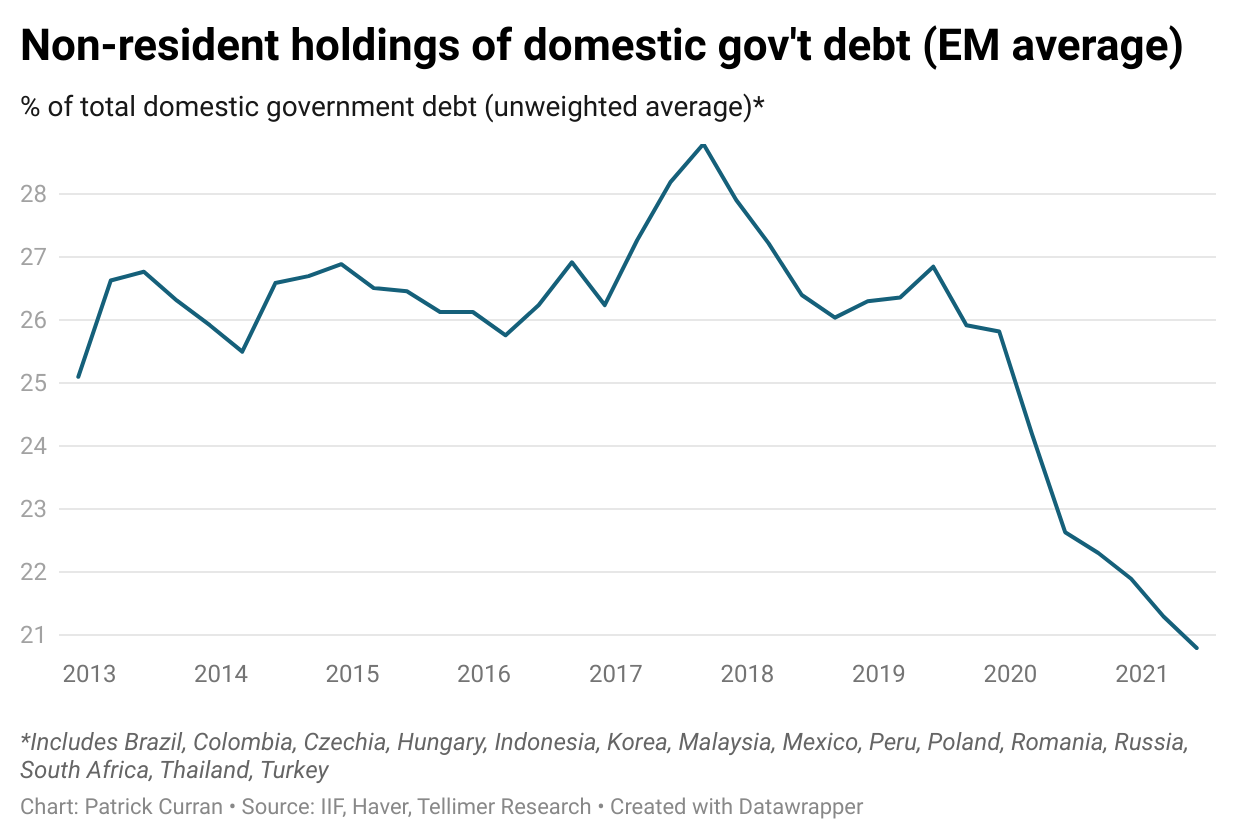 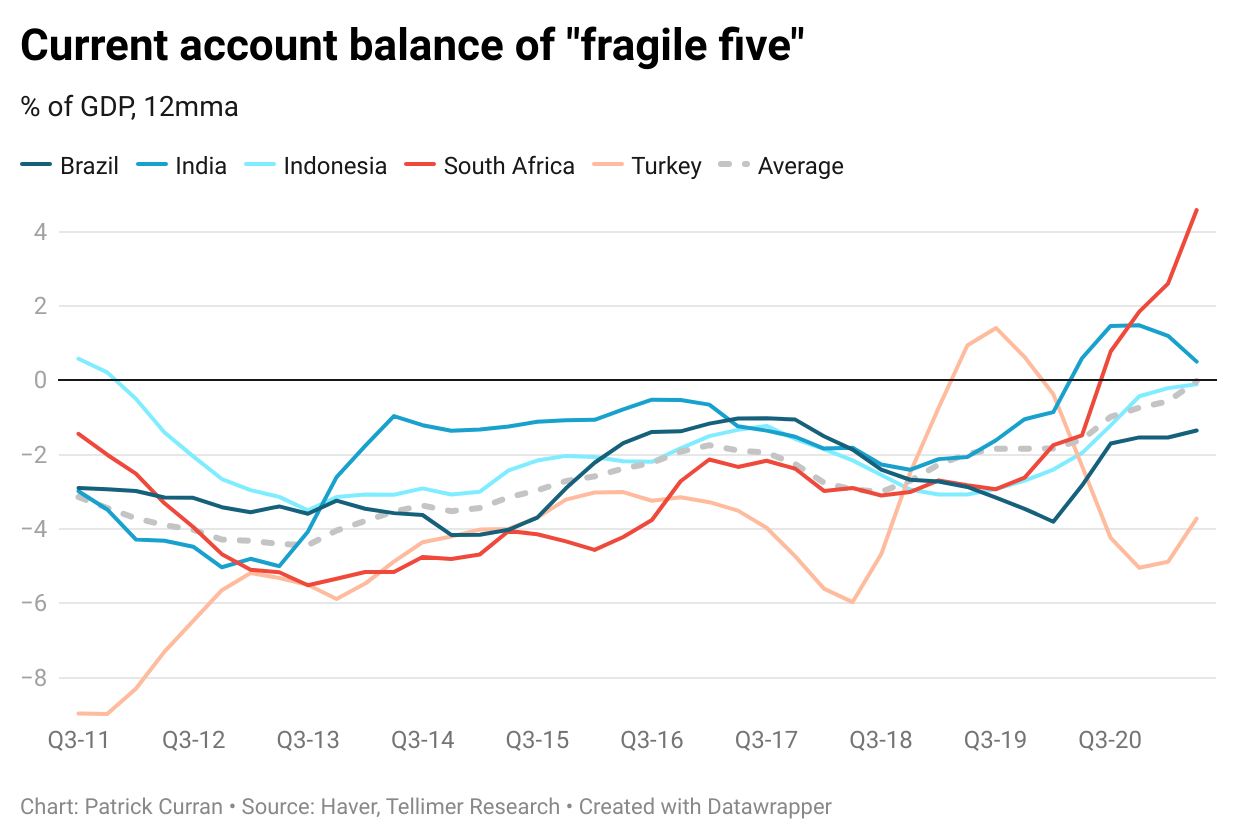 However, there is a wide dispersion of risk between countries. Given the rally in commodity prices, the risk has shifted largely away from commodity exporters and towards commodity importers (see here and here for my colleague Hasnain Malik’s take on the winners and losers). Likewise, while non-resident holdings of government debt have declined on average across EM, some countries (like Egypt and Zambia) have seen a steep increase that leaves them vulnerable to capital outflows. 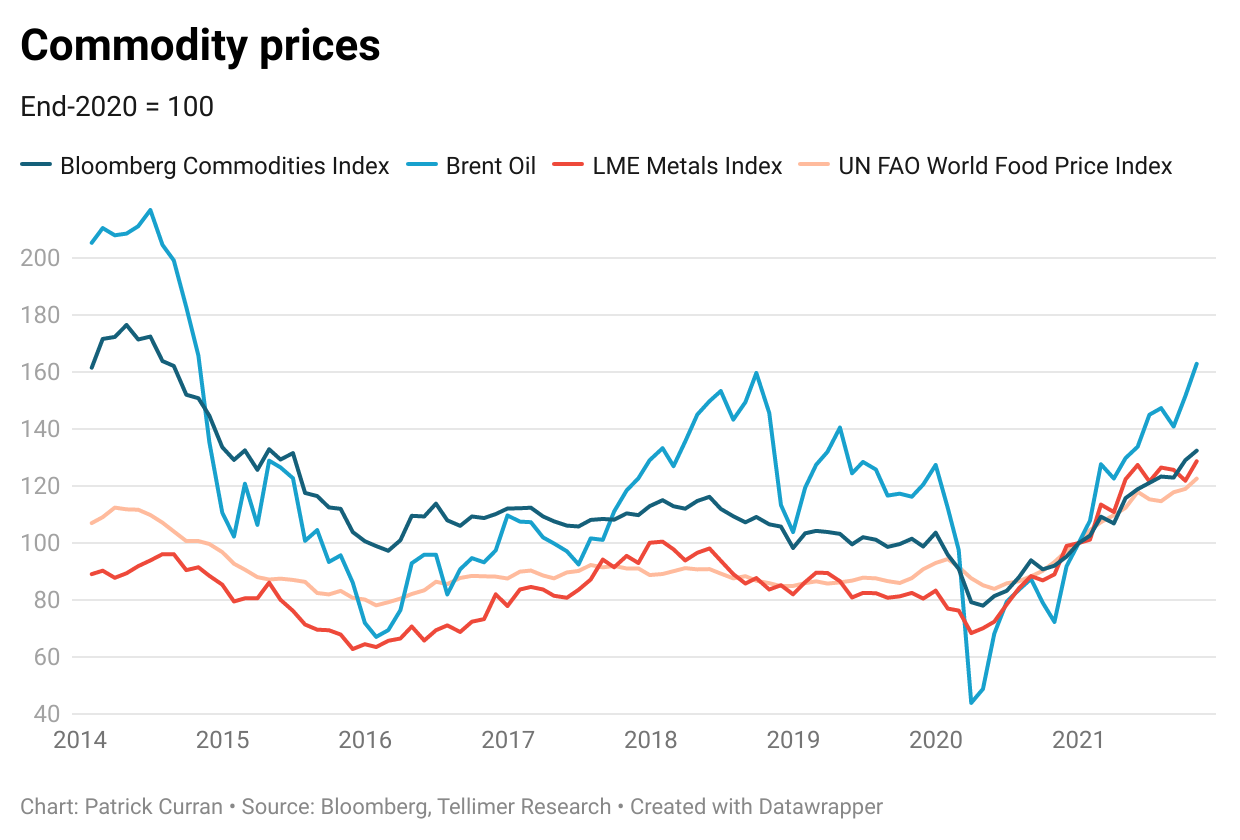 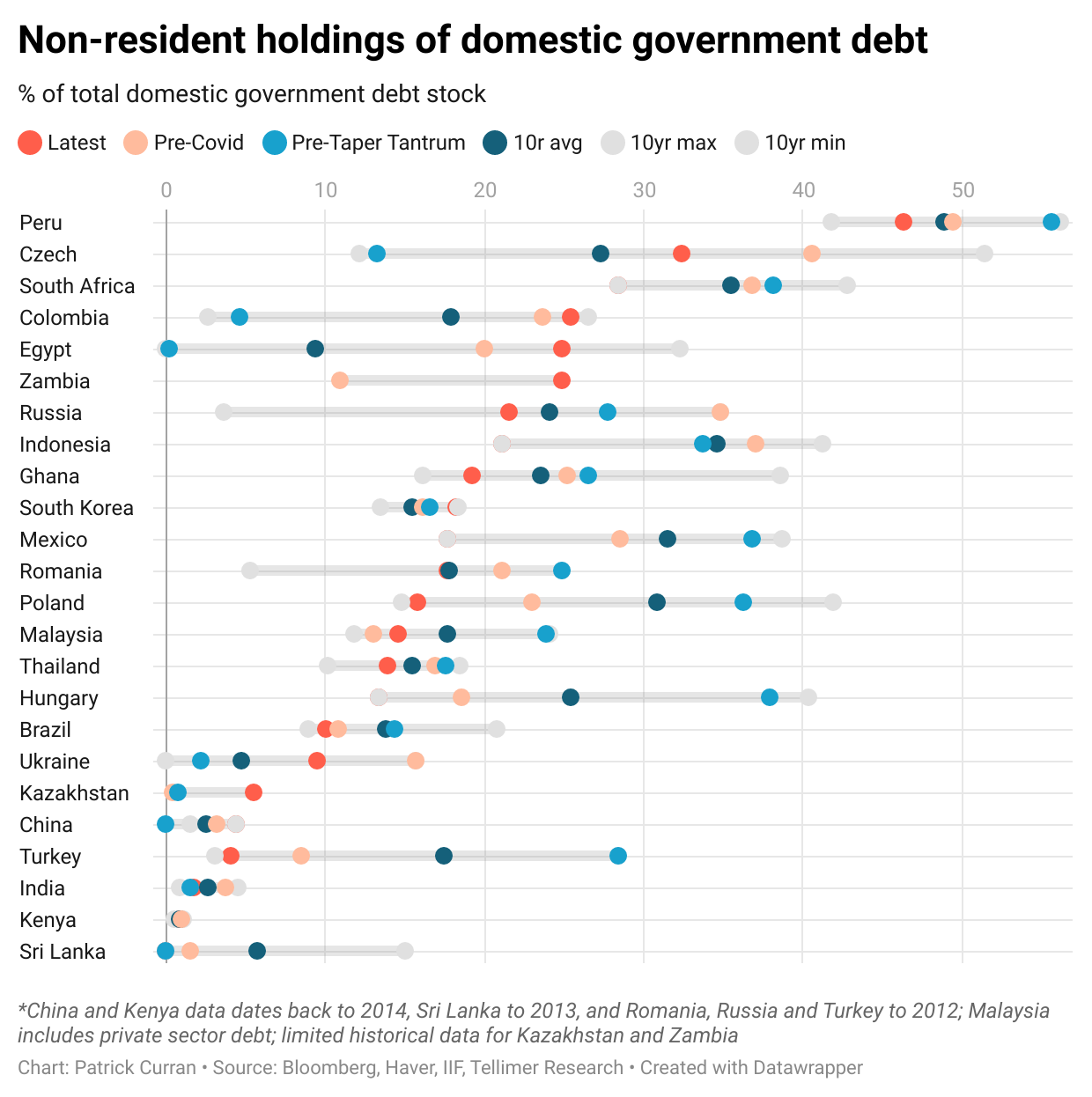 To identify countries that could be at the greatest risk of a faster than expected tightening in DM monetary policy next year, we update our Taper Tantrum Scorecard (last updated in July). The scorecard flags countries as vulnerable if they have low FX reserves, large gross external financing requirements (a high current account deficit or external amortisations), a large stock of external debt (either FX-denominated or domestic debt held by non-residents), a lot of short-term external debt, a low or negative interest rate differential with major DMs, and a high reliance on market financing. 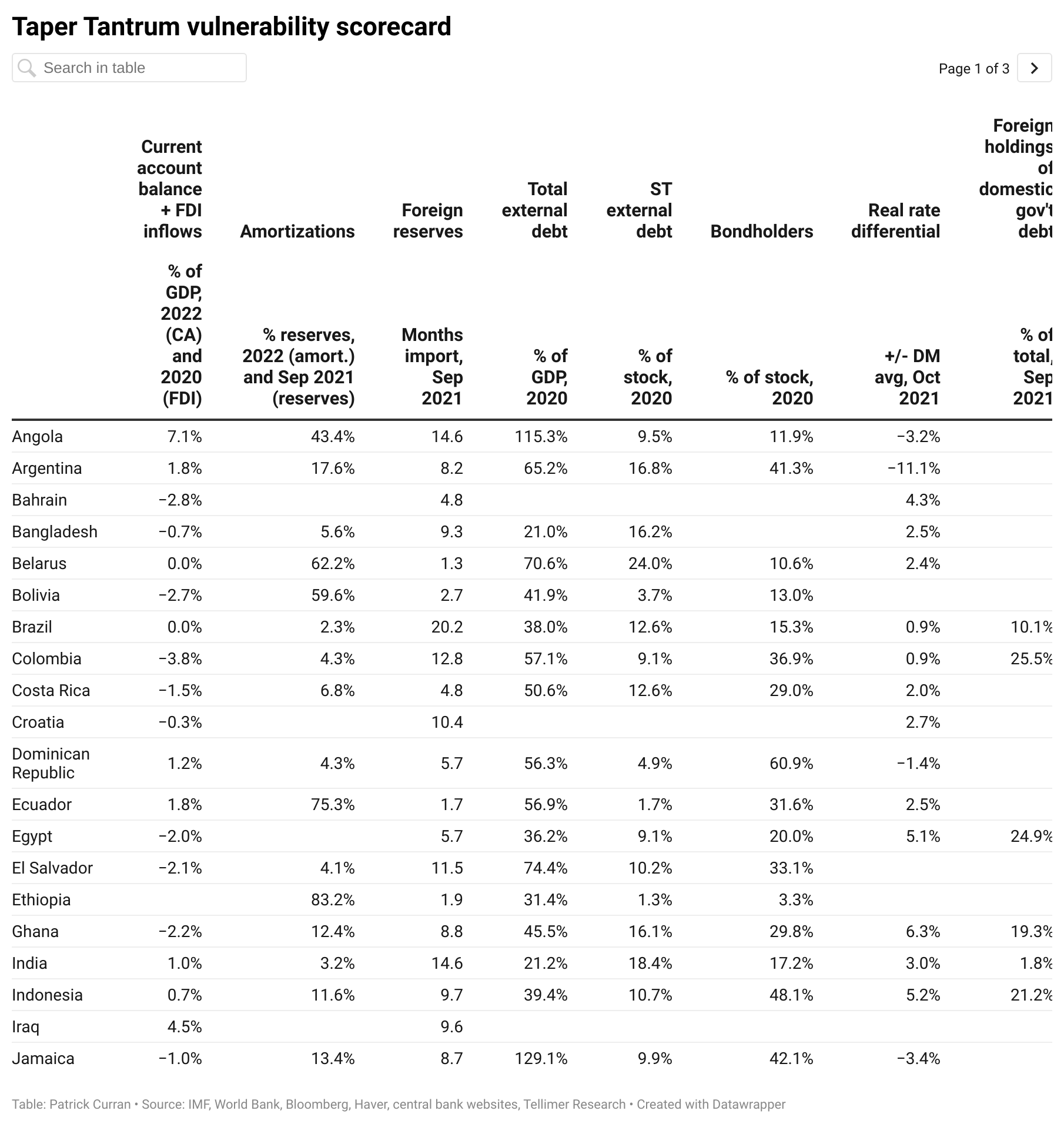 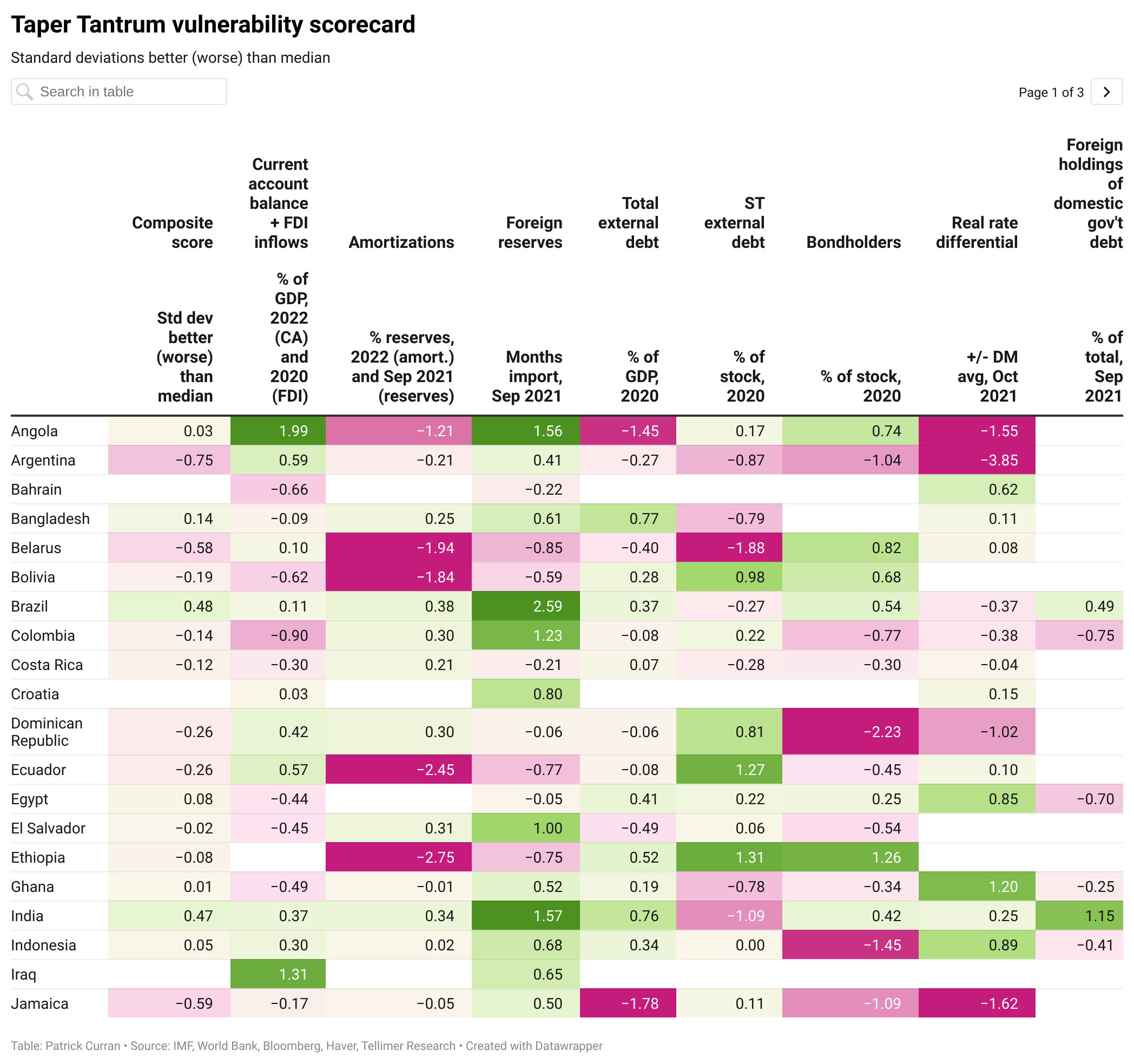 As we found at the time, the countries at the greatest risk have largely shifted from the more systemic “fragile five” of Brazil, India, Indonesia, South Africa and Turkey to “fragile frontiers”, with the most vulnerable countries in our 43-country sample currently including Mongolia, Tunisia, Argentina, Jamaica, Belarus, Sri Lanka, Turkey, South Africa, Ukraine and Mexico (with Turkey and South Africa remaining, but with lower current account deficits and non-resident holdings than before the 2013 taper tantrum).

While some smaller DM central banks have hiked rates (Norway, New Zealand), attention in 2022 will turn to the timing and pace of rate hikes among major DM central banks, foremost among them the Fed. The Fed is unlikely to turn its sights towards rate hikes until after its asset purchases have wound down, which at the current pace of US$15bn per month would be mid-2022. However, markets are betting that persistently high inflation could force the Fed to hike shortly thereafter, with c40bps of hikes priced in over the next 12 months (from no hikes being priced in as of mid-September on the back of rising inflation, with October CPI surprising to the upside at a three-decade high of 6.2%yoy). 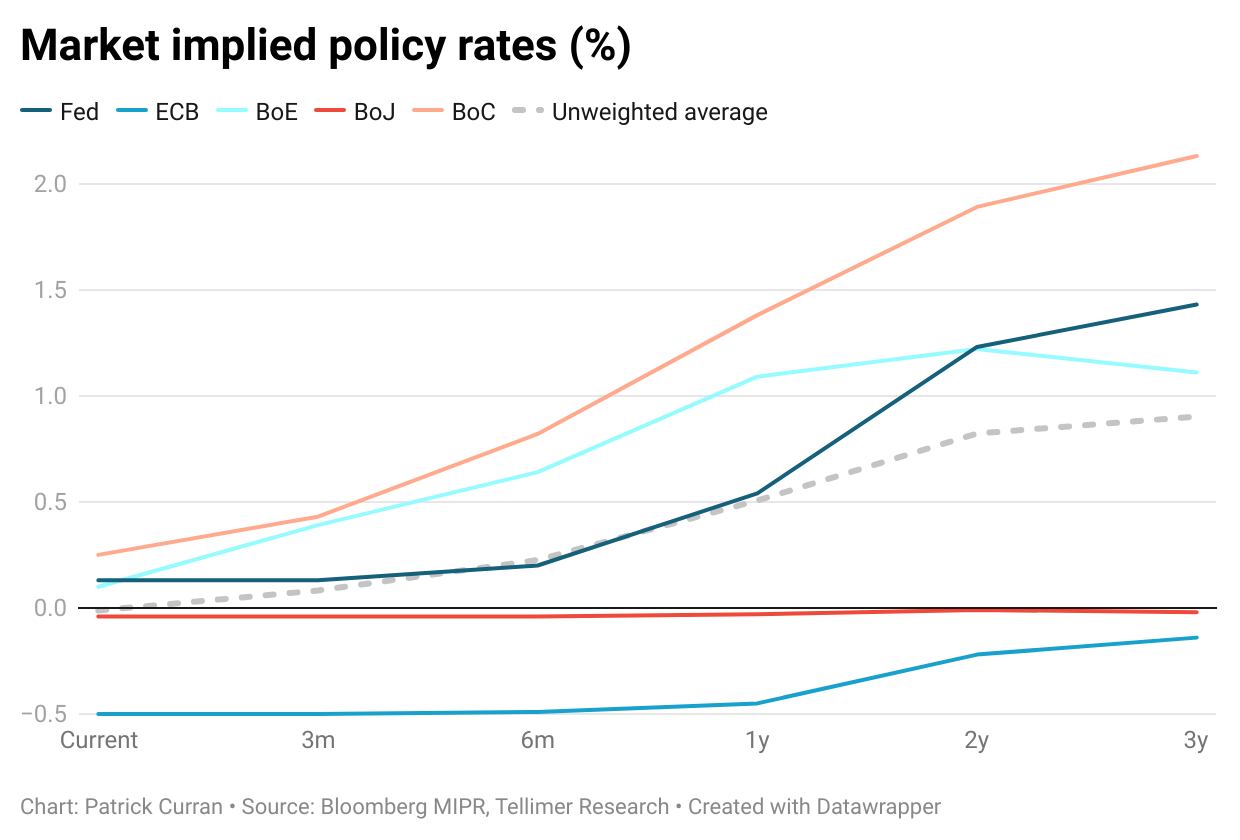 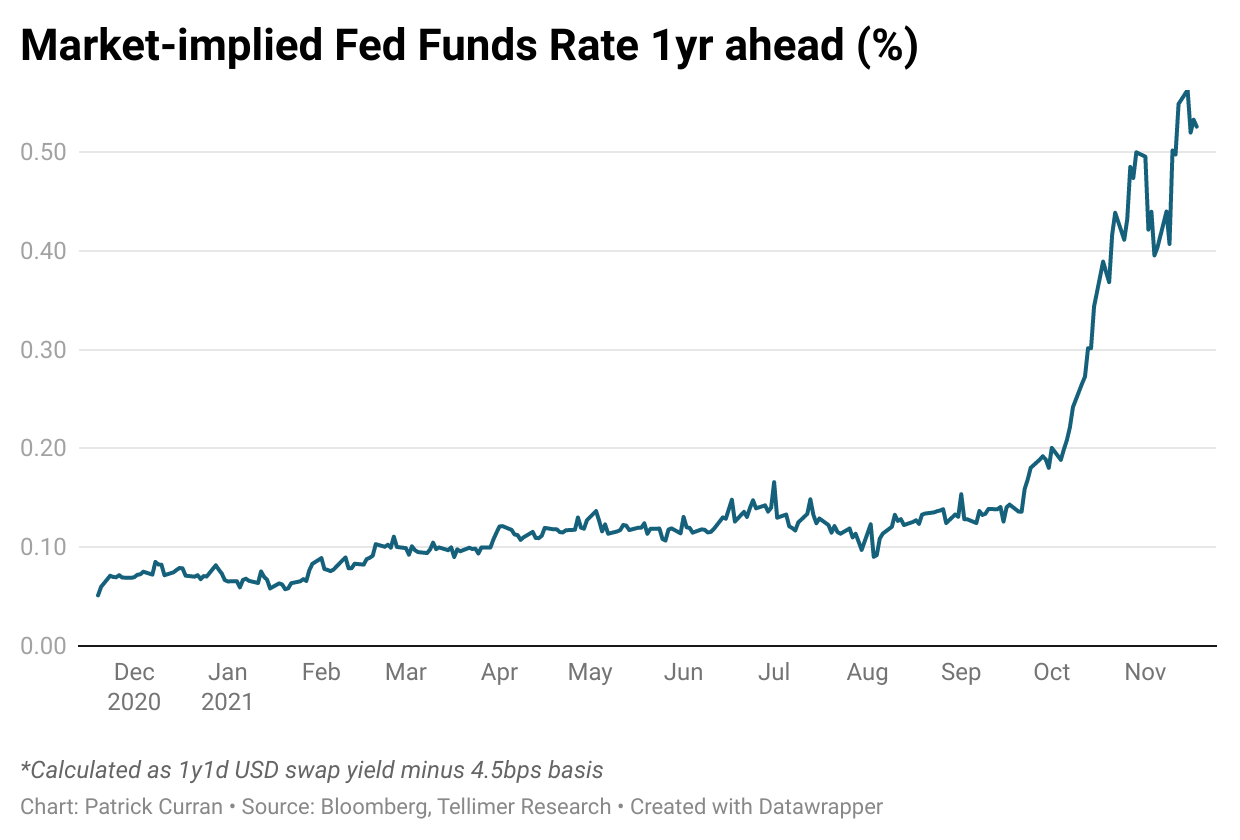 So, while the Fed has managed to avoid a new taper tantrum for the time being, if inflation appears stickier than it and other major DM central banks currently anticipate, it could prompt a hawkish shift in their reaction functions that leads to a renewed selloff for EM assets. Indeed, the shift in market-implied policy rates since mid-September is a salient illustration, with the Bloomberg dollar index strengthening by 2.9% since mid-September versus a 5.7% decline for the JP Morgan EM Currency Index. Against this backdrop, 2022 could be a similarly volatile year for EM credit and currencies, with assets surging and selling off in fits and starts alongside shifts in global risk sentiment.

While we think EM assets will remain relatively attractive amid the ongoing search for yield (with negative-yielding assets still making up a sizeable chunk of the fixed income investment universe), and larger EM should be relatively well-insulated from a taper tantrum-like event given improved external balances and lower foreign holdings of domestic debt, EM as a whole would still be vulnerable to a deterioration in global risk sentiment and a more disruptive, as opposed to gradual, normalization of rates. EM investors will have to differentiate between countries to navigate what could be choppy waters for EM assets in 2022. 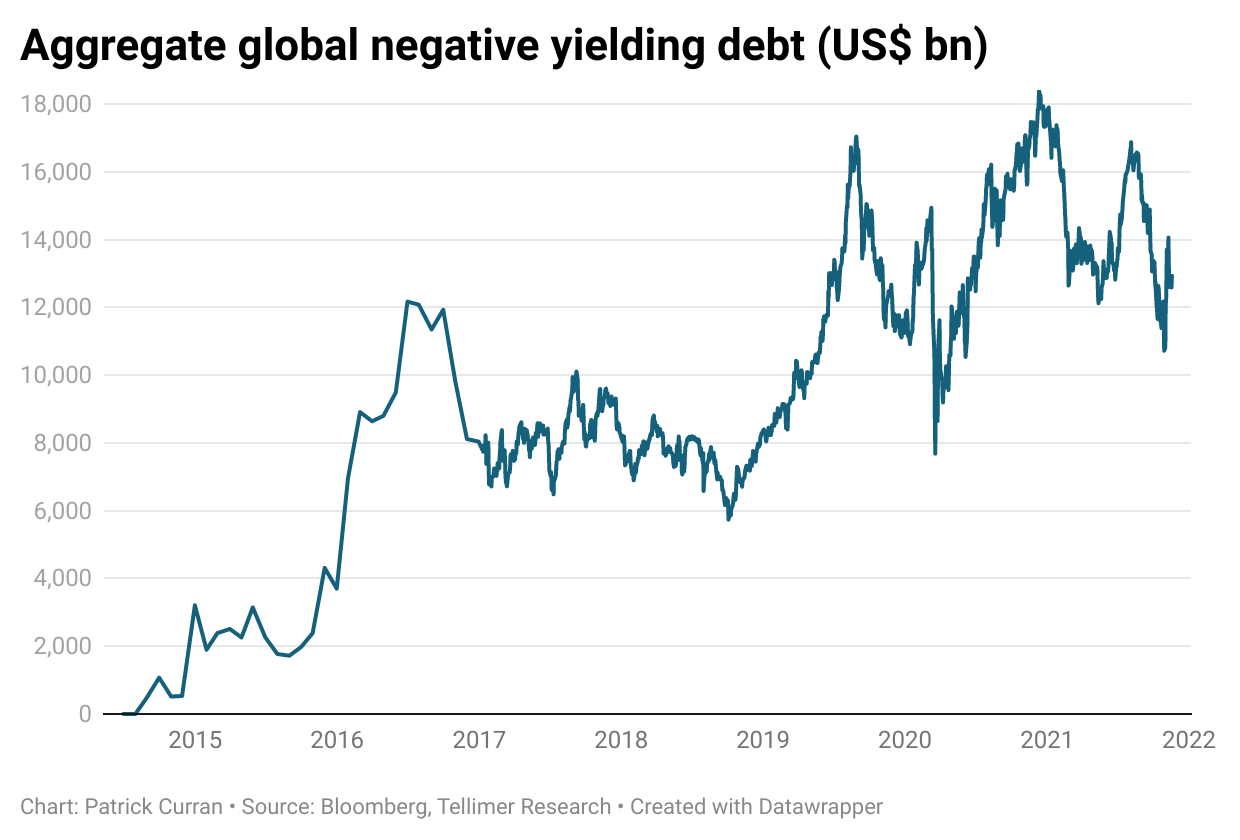