North Korea test-fired what is believed to have been an intercontinental ballistic missile (ICBM) today. Just what the world doesn't need right now.

If confirmed, it will be Pyongyang's first ICBM launch since 2017, breaking Kim Jong-un's own self declared moratorium on testing long-range ICBMs or nuclear weapons. Flight data already suggest it is its most powerful missile yet, according to reports.

The missile, believed to be a new type of ICBM, travelled 1,080km over the course of 71 minutes and reached an altitude of more than 6,200km, according to South Korean and Japanese reports. The missile landed off north-eastern Japan, 170km west of Aomori prefecture, inside its exclusive economic zone (EEZ).

Disturbing as this all is, the ICBM launch is, however, no great surprise. North Korea has seemingly been gearing up towards a launch all year. Today's test is its 11th round of missile tests this year (the 10th if we exclude last week's failure), and we remarked after the seventh test on 30 January that an ICBM would be next. 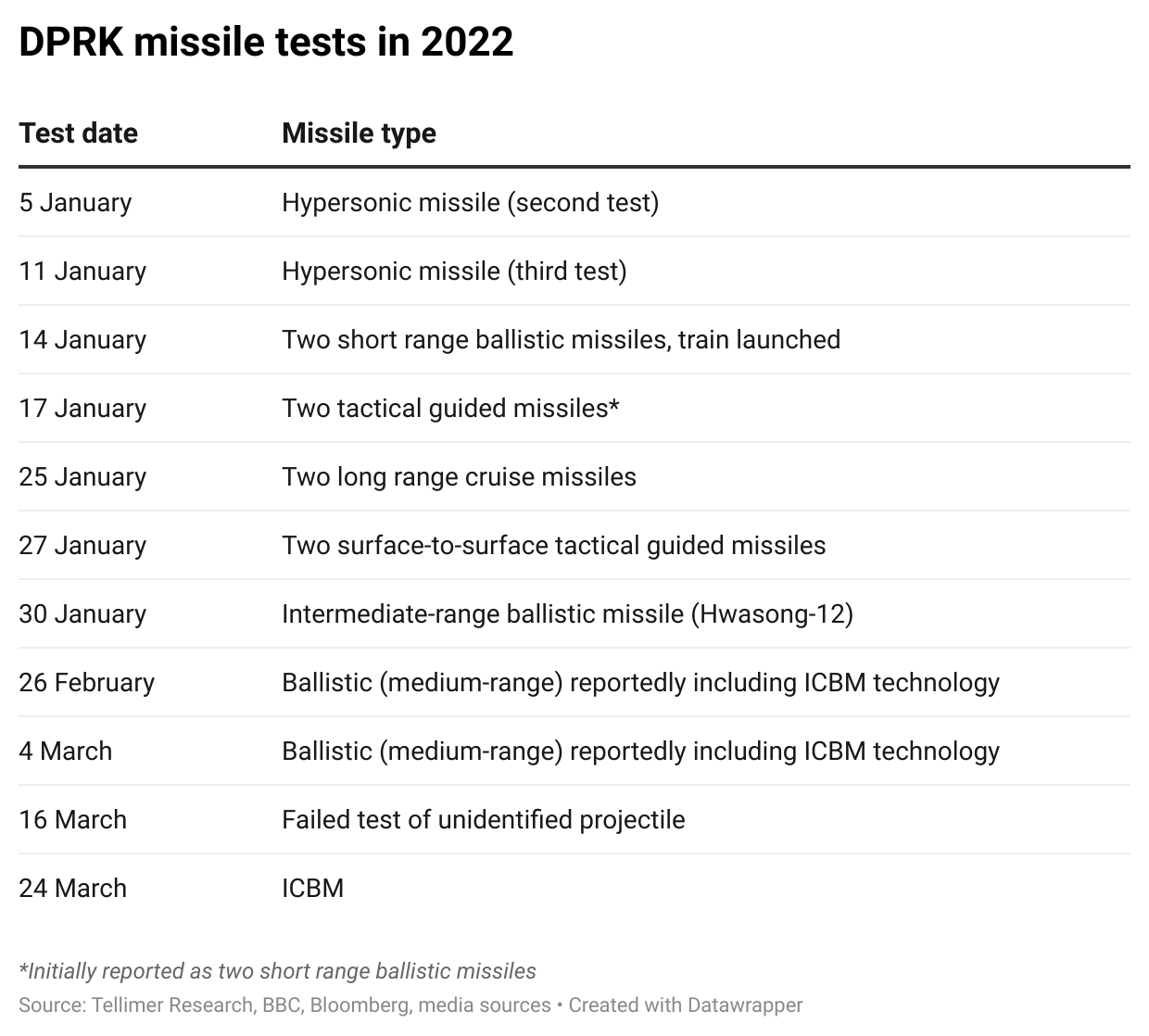 The ICBM test will be seen by the West and its allies as a major escalation and provocation, and is a clear breach of UN Security Council resolutions. It has been met with condemnation from the US, Japan and South Korea. The US called on North Korea to immediately cease its destabilising actions. In response, South Korea test-fired a series of missiles itself.

But it is not clear what else the West, and the UN, can do, given the existing already tight and wide international sanctions on DPRK, although stronger compliance from some countries would help (and surely Russia, and likely China, will seek to block any new UN measures). Nor is it clear at what point Kim will feel he can stop, as he chooses missile development over negotiations.

Meanwhile, North Korea has not responded to the US's open invitation to meet without pre-conditions.

As for why Kim has embarked on this path, it is difficult to know for sure. Missile development and demonstration of ICBM capability may be a cry for attention, and to signal that North Korea cannot be ignored, especially now if Kim feels the US's attention is elsewhere with the world's focus on Russia-Ukraine. It might still be a way of seeking to extract concessions, as Pyongyang has sought to do in the past, although that might only work if Kim is willing to return to negotiations. It might also be a way of testing South Korea's new president-elect, Yoon Suk-yeol, following the elections on 9 March, who might seek a harder line with the North.

However, with an eye on Russia's war in Ukraine, there might be a concern over miscalculation and escalation from Kim; while the West may have to, and be seen to, do something, or conversely face risks if it does not.