Nigeria's ballooning subsidies are a problem for the budget

Senegal is getting ready to become a major oil and gas producer. The first phase of the Greater Tortue Ahmeyim (GTA) gas project is near completion and it could be exporting gas to Europe sometime in 2024.

But Nigeria, which was once the top oil producer on the continent, has recorded sharp declines in oil production. This has resulted in a plunging oil revenue, most of which is earmarked for the country's ballooning energy subsidies. As a result, the fiscal picture painted in the 2023-25 medium-term expenditure framework is dire, with the fiscal deficit set to spike to as much as 5-5.5% of the country’s GDP.

Meanwhile, the AfCFTA hub launched in Ghana last week, with the free trade bloc hoping to create greater awareness of the benefits of its digital ecosystem. Ghana is one of only seven countries (and the only one in West Africa) selected to begin trading under the pilot phase of the AfCFTA framework, which is expected to boost intra-Africa trade.

The first phase of the Greater Tortue Ahmeyim (GTA) gas project, straddling Senegal and Mauritania and developed by BP and Kosmos Energy of the US, has reached 80% completion. It is expected to deliver first gas by the end of 2023 and start exporting to Europe in 2024. Discussions on the second phase – estimated to cost cUS$5bn and start in 2024 or 2025 – have begun.

The first phase of the GTA is expected to deliver 2.5mn tonnes per annum and the second phase could increase that number to 5mn tonnes per annum. Progress has also been made on other projects, including the BirAllah gas field project, national gas-to-power project Yakaar and the Sangomar oil and gas projects.

Senegal is making impressive progress on its oil and gas projects and is gearing up to be a major gas producer, which could significantly boost its earnings.

The African Continental Free Trade Area (AfCFTA) established its 'hub' – a one-stop shop for the registration and certification of businesses, validation for businesses looking to export to markets across the continent, and a directory to aid connectivity between businesses – on 8 July, almost two years after the commencement of the trade agreement. Last week, the Ghanaian government and the AfCFTA secretariat launched the hub in Ghana to encourage local businesses to use it.

The digitalisation of AfCTA through the hub could be the boost needed for the trade agreement. Across Africa, there is a need to create awareness of the benefits embedded in AfCTA, which has thus far been ratified by 43 countries.

Ghana is one of the seven chosen to run the pilot phase of the AfCFTA framework; others include Rwanda, Cameroon, Egypt, Kenya, Mauritius and Tanzania. 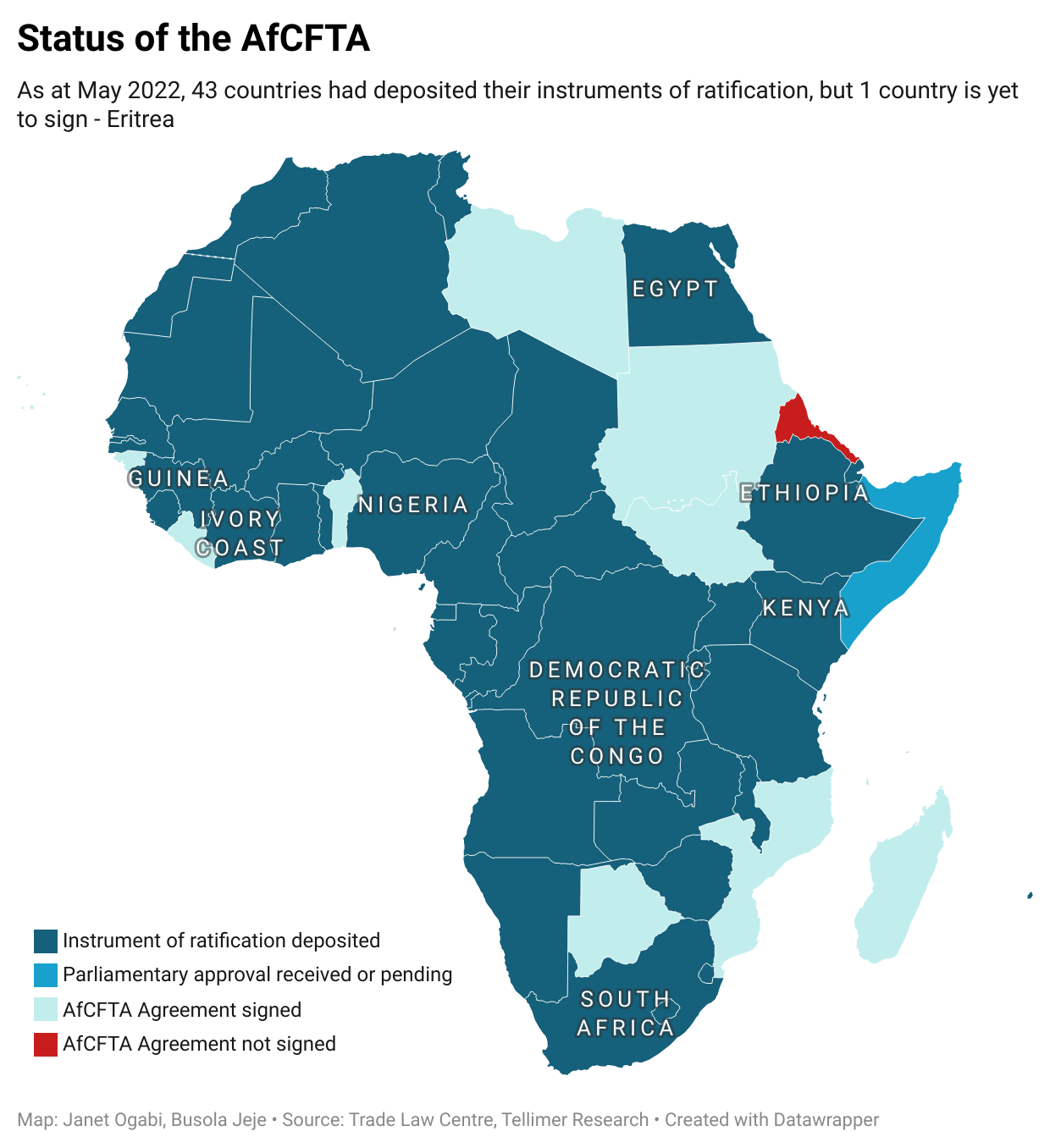 Last week, Nigeria’s finance minister presented to parliament the 2023-25 medium-term expenditure framework (MTEF), which is a pointer towards the 2023 budget. The document contains two scenarios for Nigeria's fiscal position:

The first scenario will leave a meagre NGN498bn in net oil revenues for the Federal account and the second scenario NGN3.84tn. Overall, these, along with revenue and expenditure projections, will result in net fiscal deficits of NGN12.4tn and NGN11.3tn in the two 2023 budget scenarios.

Both scenarios are significant leaps from the budgeted NGN7.4tn fiscal deficit for 2022 (4.0% of GDP) and represent 5.5% and 5.0% of GDP, respectively, above the 3% of GDP benchmark set in the Fiscal Act.

Nigeria’s vice president, Yemi Osinbajo, on his trip to the US to seek financing for the country’s energy transition plan last week, proposed a debt-for-climate (DTC) swap deal. Osinbajo met with World Bank officials, US counterpart Kamala Harris and others to seek support for the deal ahead of the COP 27 meeting in Egypt in November.

A DTC is a form of debt forgiveness where lenders (in this case multilateral and bilateral organisations) grant debt relief to countries in exchange for the funds being used for specific climate-conscious ('green') projects. DTC swaps are rare, but not new, with the Seychelles and Belize also having used the tactic to ease rising debt obligations and raise financing to tackle climate change in EMs. They can also help richer countries meet their annual US$100bn annual commitments to developing countries, which is a key focus of COP meetings.

Despite the improvements, capital flows remain much lower than they were pre-2020 (when the quarterly average was cUS$6bn). The persisting FX issues and excessive capital controls have left investors wary of the Nigerian market.

That being said, the issue of capital outflows is not peculiar to Nigeria, with the high level of macroeconomic risk weighing on sentiment across emerging markets. 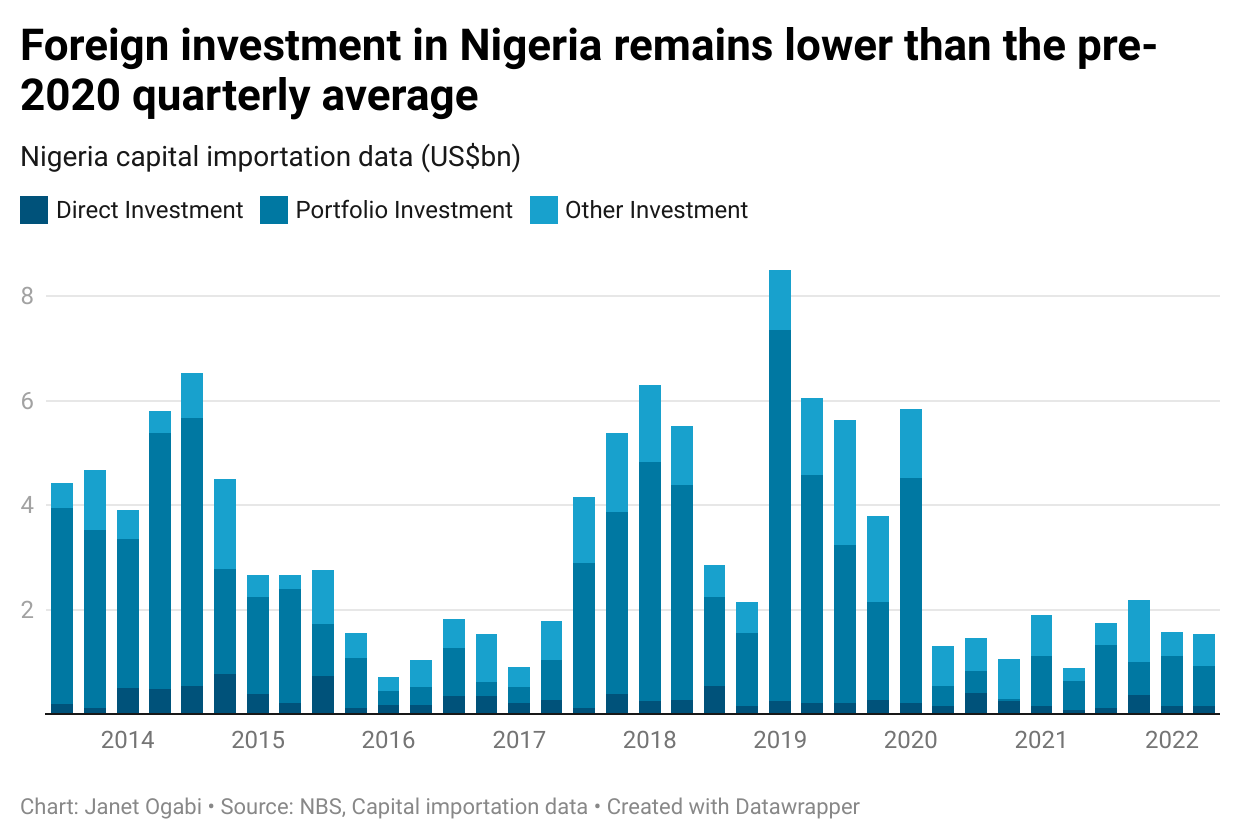 Senegal is set to release its inflation numbers for August, after a +200bps mom spike in inflation in July to 11%, sparked by increases in food, utility, clothing and transport prices.

Nigeria's equities market has posted a loss of 0.5% in the past week, taking the year-to-date gain to 16%. Blue chips: AIRTELAF, BUAFOODS, BUACEMENT and ZENITHBA booked the most losses, offsetting gains for NB and MTNN.

As interest rates pick up, local Nigerian investors are likely to exit the equities market, which explains its losing streak. Looking ahead, we expect interest in the Nigerian market to remain tepid, especially as we draw the curtains on earnings releases. 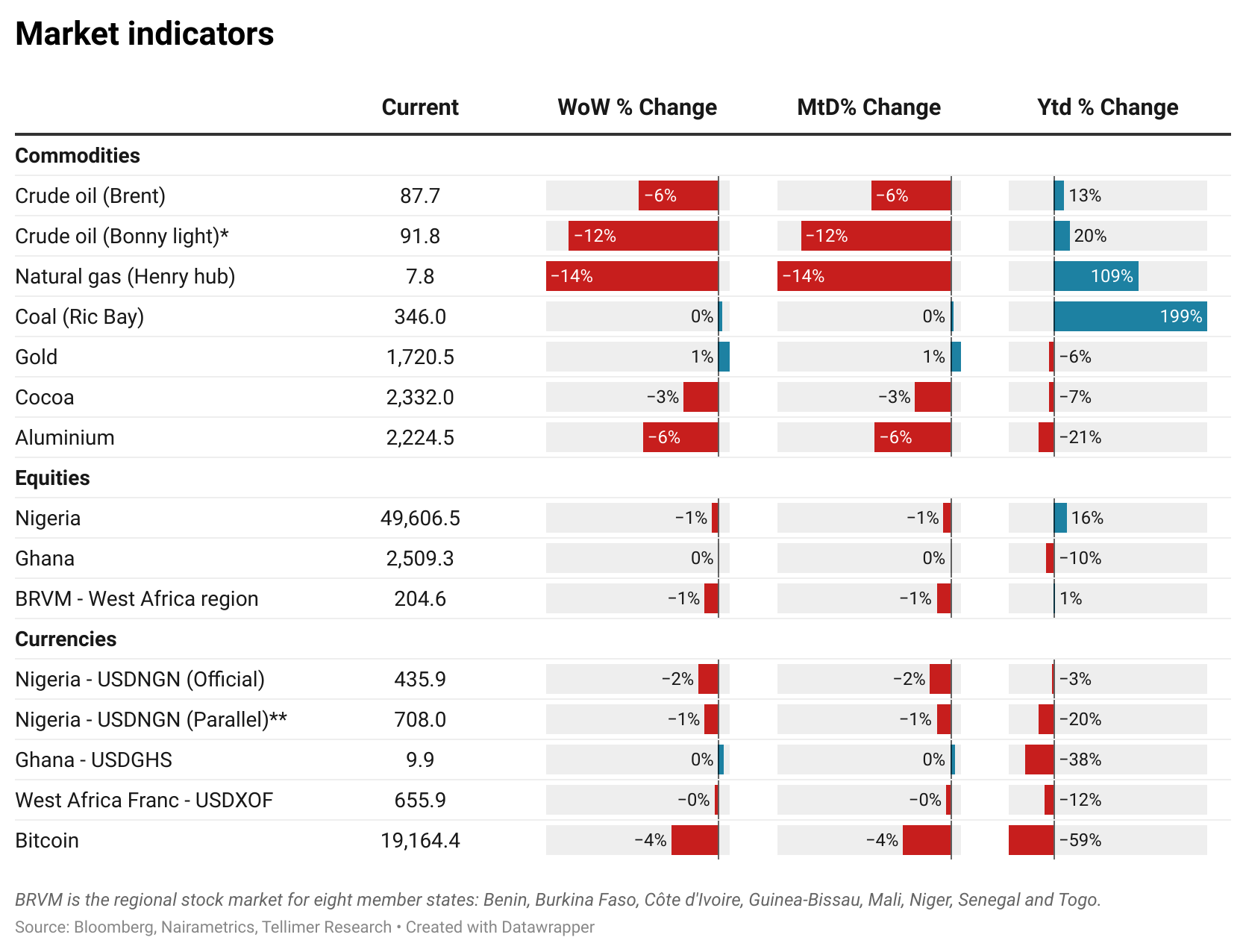 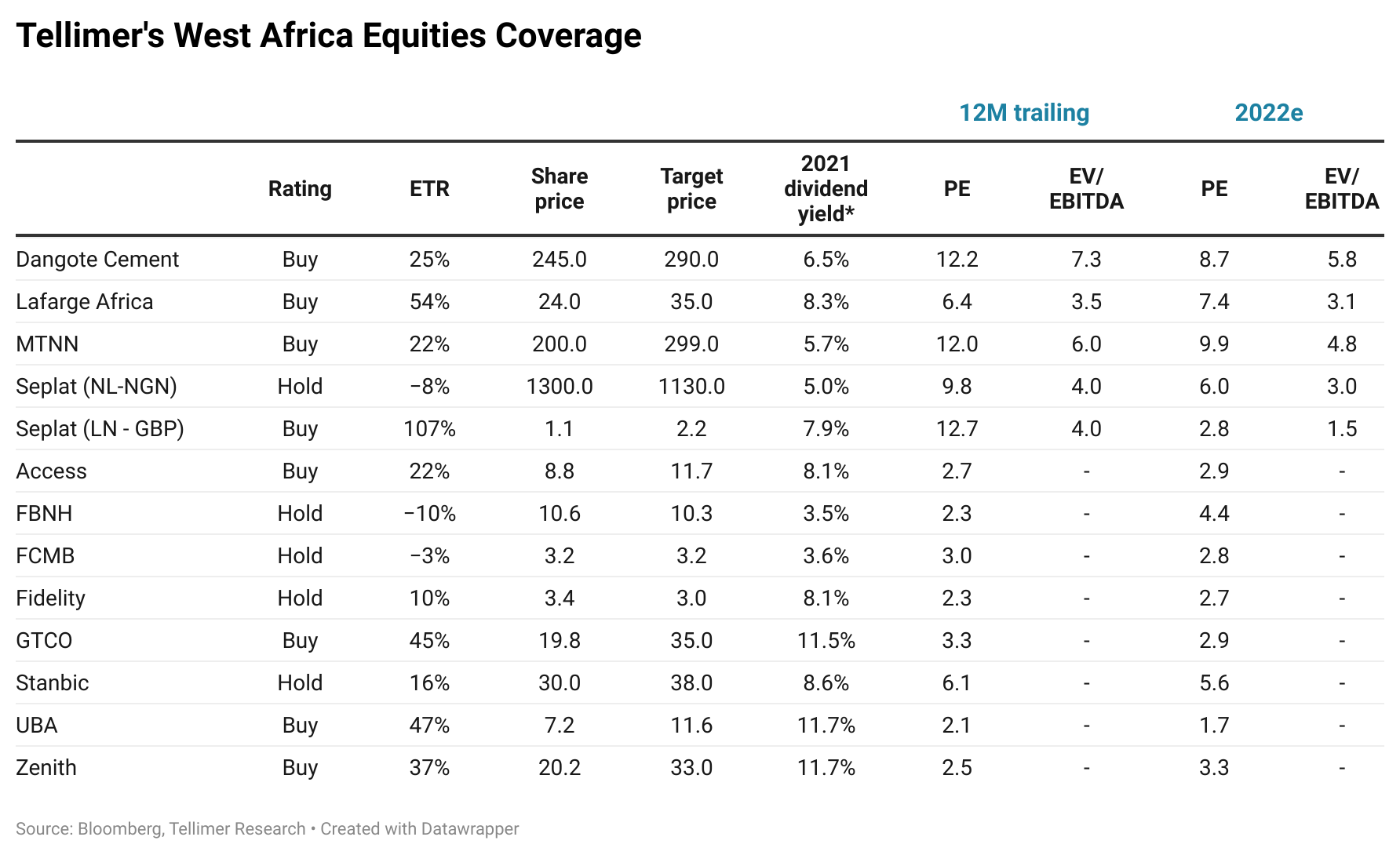 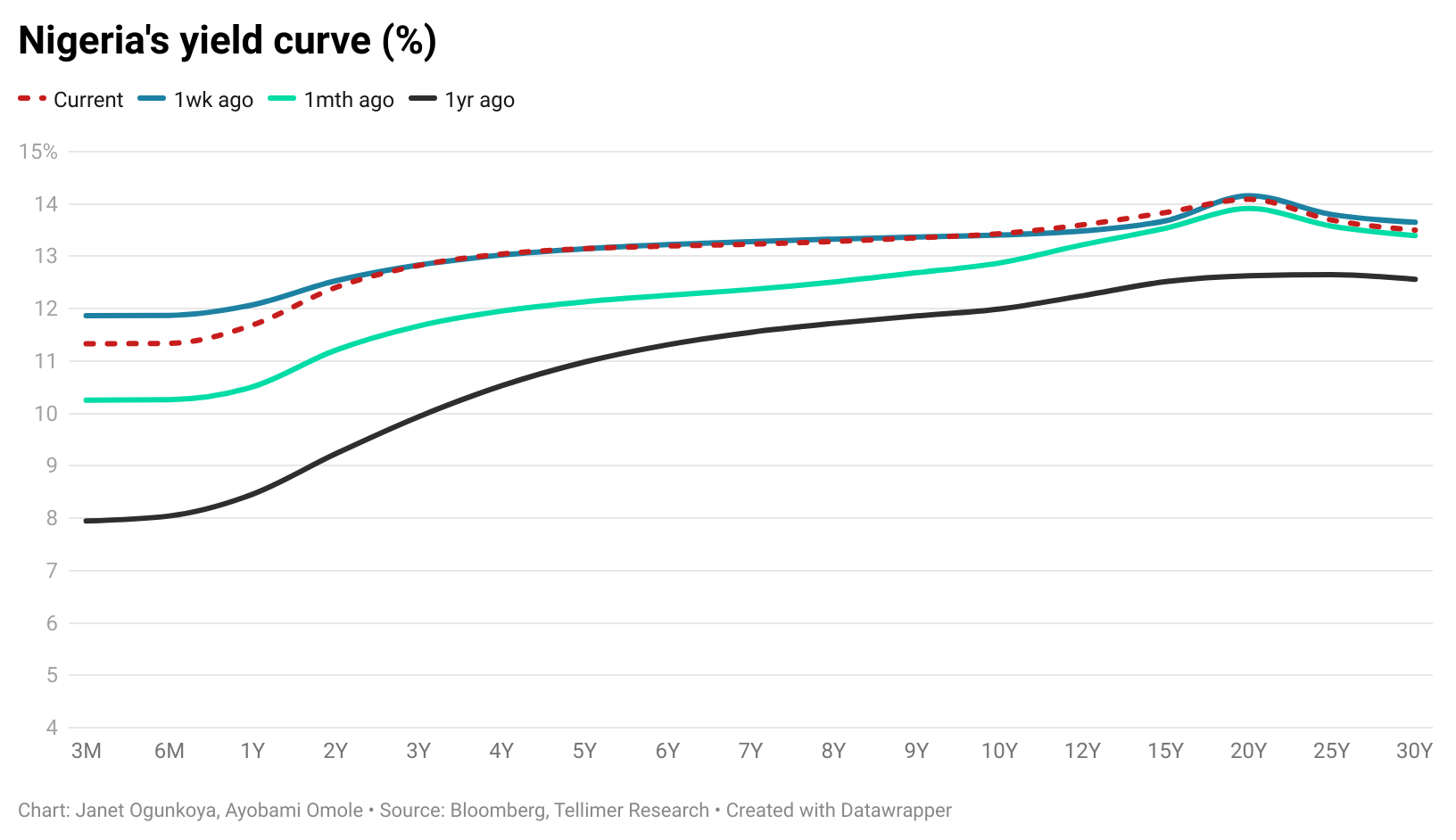 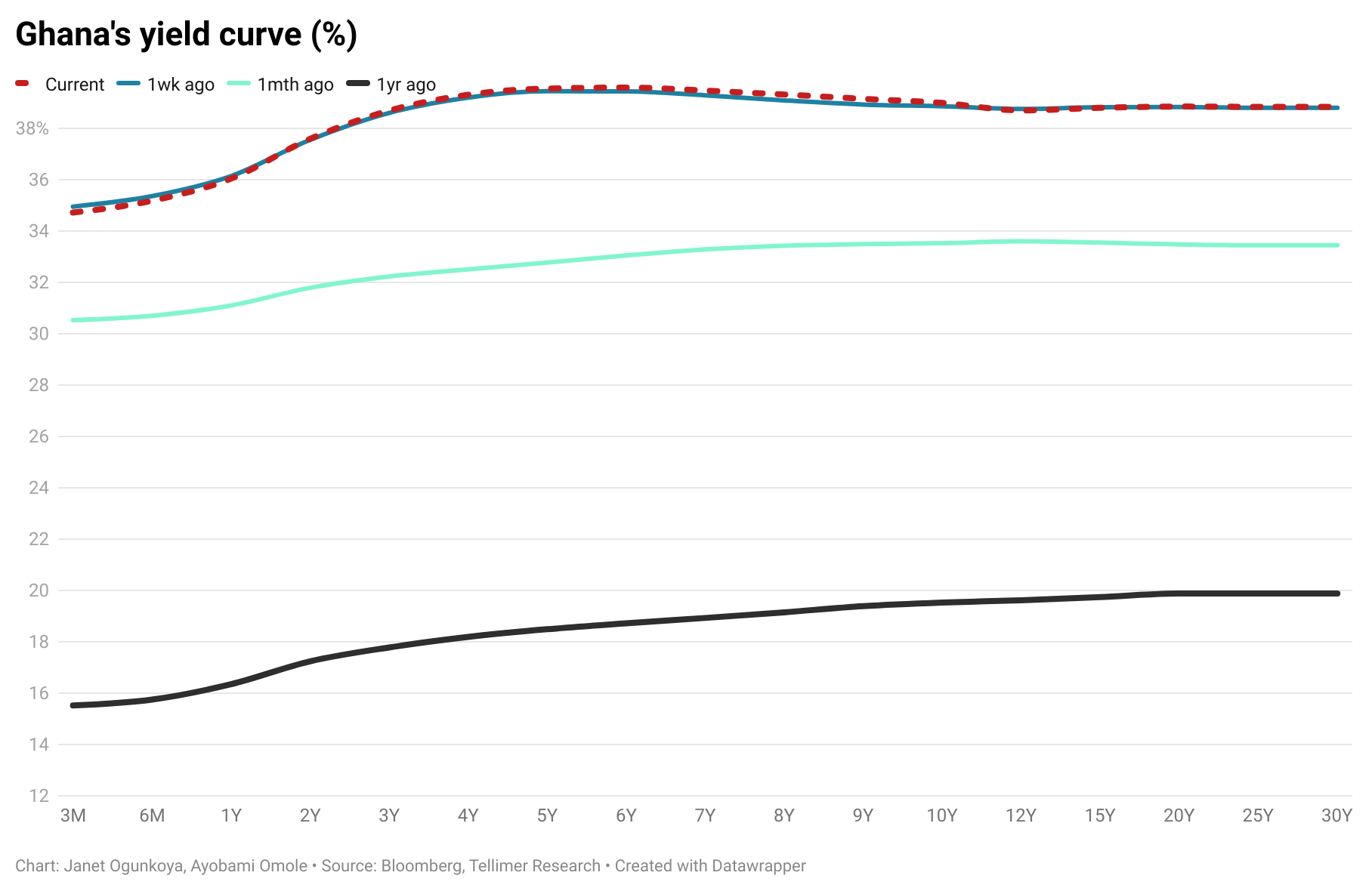