Nigeria is the biggest telecommunications market in Africa. However, despite +90% SIM penetration, the country lags behind its African peers in mobile and internet penetration, indicating that there is still more than enough room for strong subscriber growth. This is because of the relative youthfulness of the population (over 80% of the population is below the age of 40), rapid population growth, low data and smartphone penetration, and a very pronounced dual SIM culture.

Nigeria is the most populous country in Africa, with over 200mn people. Growing at an annual average rate of 2.6%, the population is expected to exceed 250mn by 2030 and 400mn by 2050. Particularly important to note is the very youthful and digitally adept nature of the population (the median age is 18 years), which helps to make it the largest market for mobile phones in Africa.

High penetration, but there is room for more

Nigeria’s mobile and internet penetration rates of 96% and c70%, respectively, are higher than the African averages. However, the country still lags behind its peers – South Africa, Egypt, Kenya and Ghana – on these metrics. 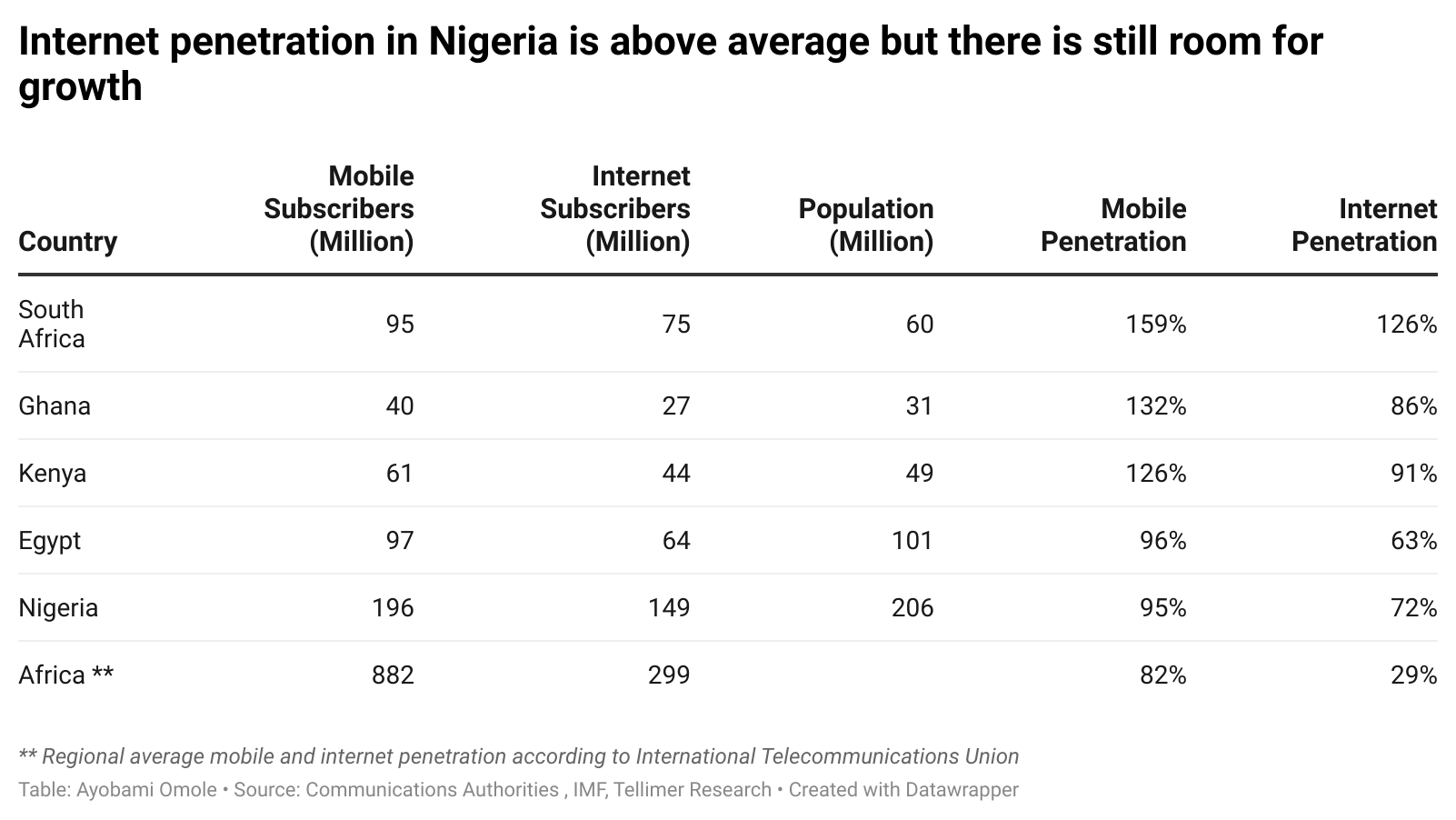 Crucially for investors in the sector, Nigeria can be characterised as a dual-SIM country, with a significant number of subscribers owning more than one SIM. During its recent database-synchronisation drive, the Nigerian Communications Commission (NCC) disclosed that up to three or four SIM cards were sometimes linked to a single person. Some of the reasons for this are:

The takeaway for operators in Nigeria is that, despite the high mobile penetration statistics, many Nigerians do not possess a mobile phone – there is huge growth potential for the telecommunications sector.

The GSMA estimates that Nigeria will be responsible for c20% of the mobile subscriber growth in Africa over the next five years. It also envisages c20% of internet subscribers in Africa will come from Nigeria by 2025. 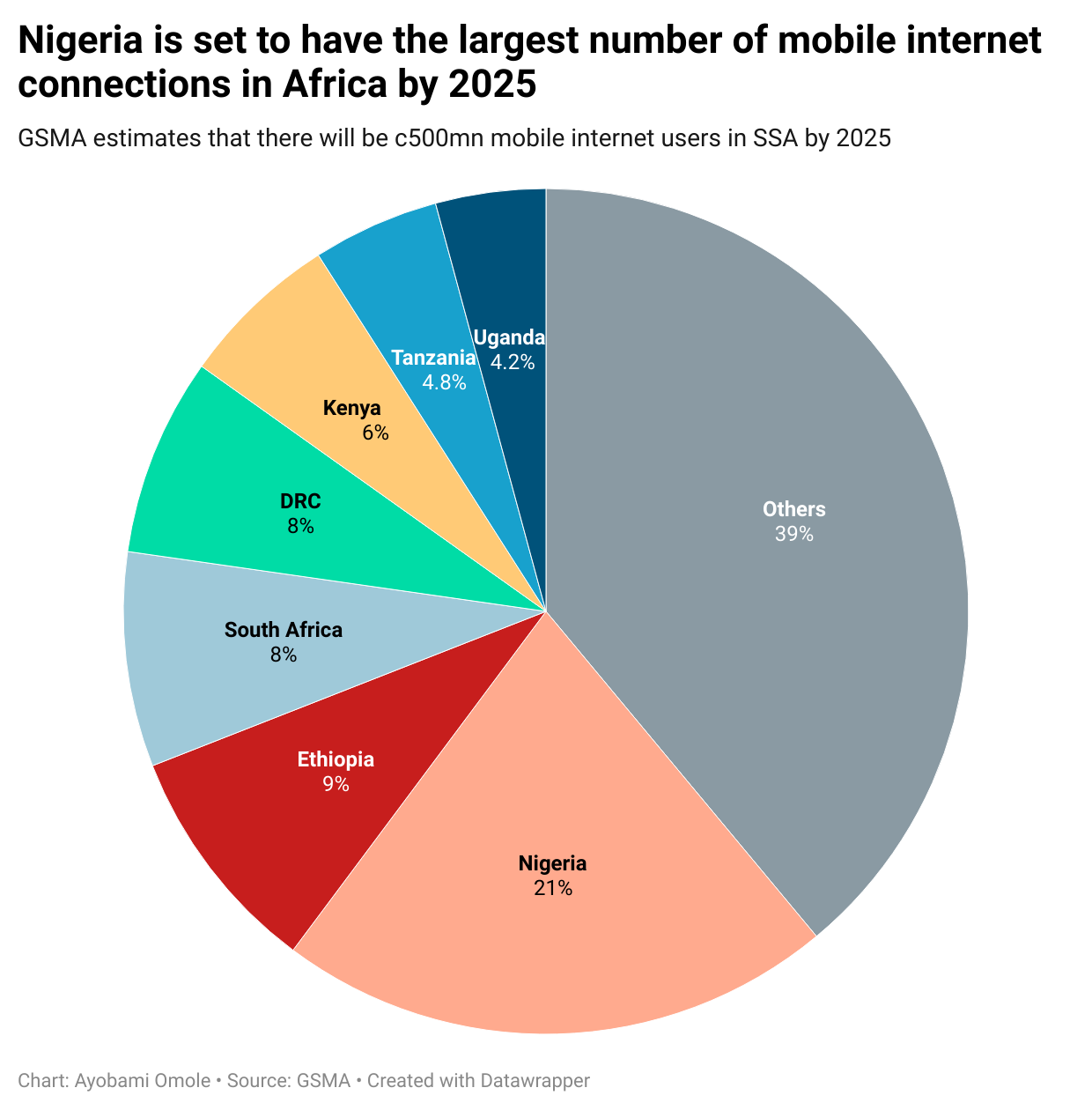 Internet connectivity is picking up

The major source of growth for the Nigerian telecommunications industry in the coming years will be the growth in internet connectivity and increased adoption of internet-enabled devices. According to MTN Nigeria (MTNN), smartphone penetration in Nigeria is currently c64%, and 4G penetration stands below 50%. 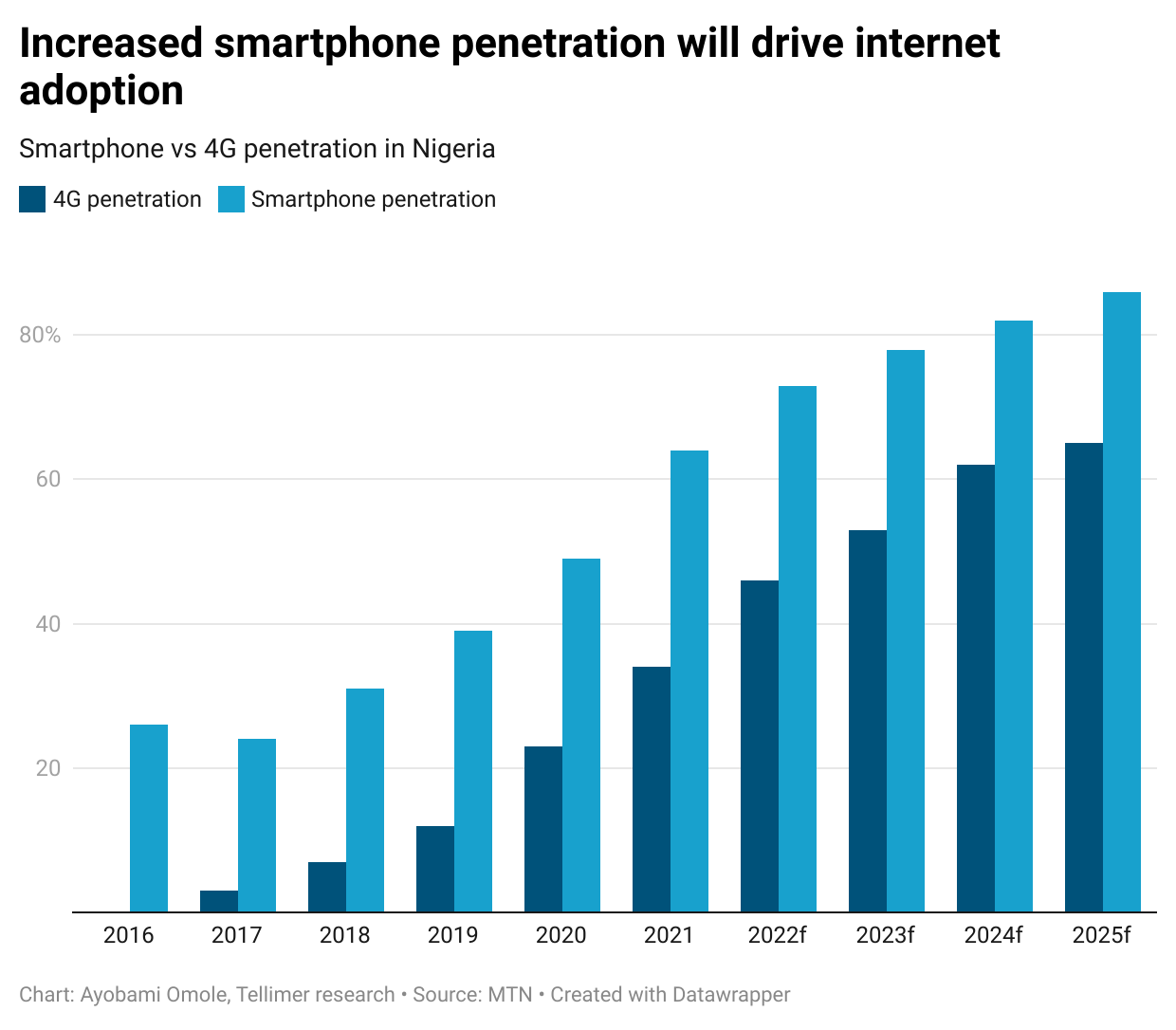 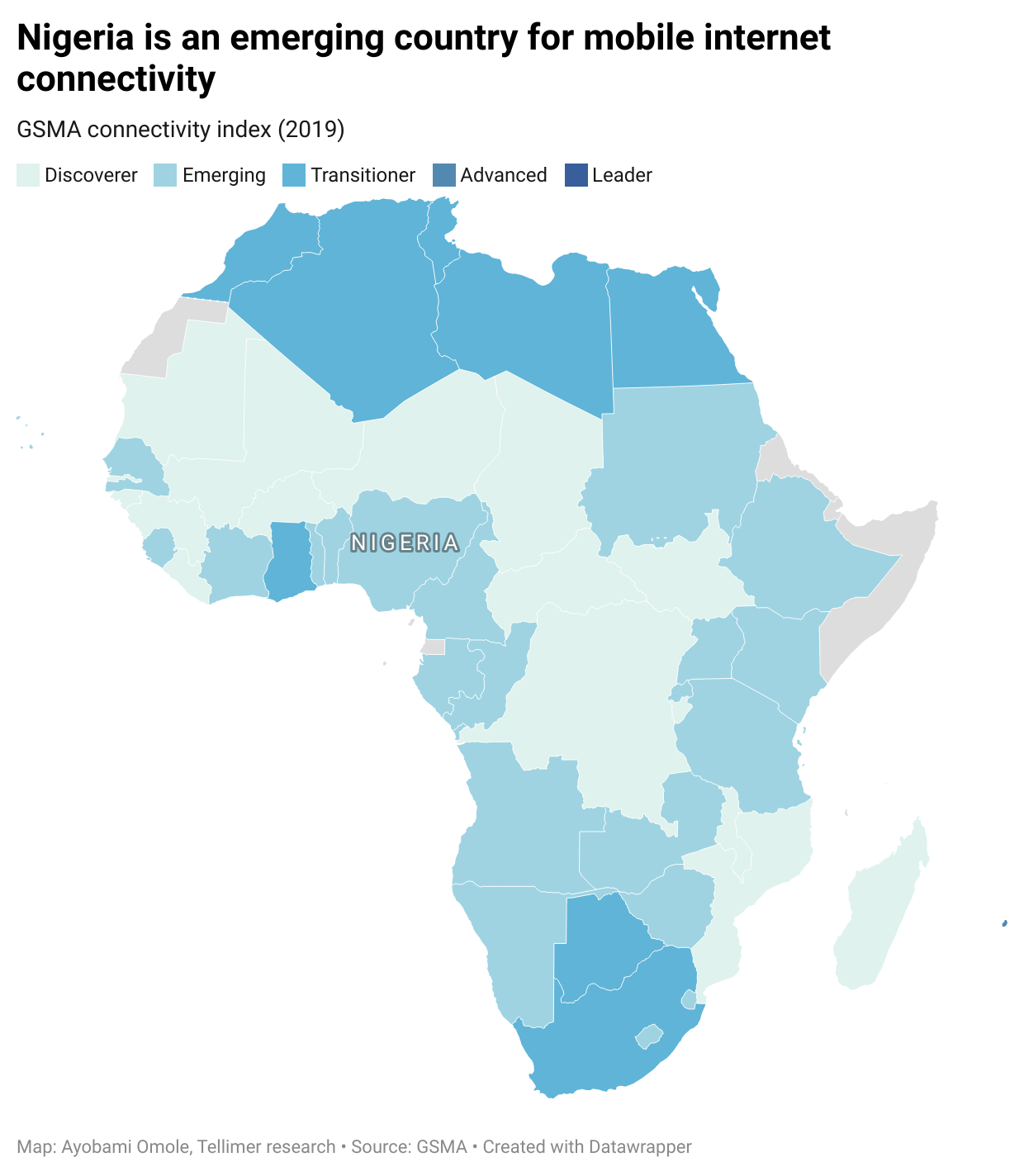 According to GSMA’s connectivity index (which measures the performance of countries against key enablers of mobile internet adoption), Nigeria is "emerging" in terms of connectivity. GSMA classifies South Africa, Ghana and Egypt as "transitioners" – one step ahead of Nigeria. Nigeria performs well in some respects, but there is considerable room for improvement, particularly in infrastructure and content & services.

Regarding infrastructure, Nigeria scores poorly because of its low 4G coverage, the absence of 5G coverage, poor network performance, a lack of other enabling infrastructure (such as electricity and internet exchange points) and a low amount of higher-band spectrum for each operator. For content and services, local relevance is the pain point; specifically, low mobile social media penetration. Nigeria's low literacy level also drags on its overall score.

Areas of above-average performance include affordability on connectivity, taxation and gender equality in access to the internet.

The major mobile technology in Nigeria is global system for mobiles (GSM), which accounts for c99% of the subscriber base. The GSM telecommunications industry is highly competitive and oligopolistic in nature, with four mobile network operators (MNOs) – MTNN, Airtel, Globacom (Glo) and 9mobile.

Intense competition in the sector has driven down costs for subscribers over the years. MNOs now give out SIM cards practially for free, compared with prices of NGN30,000 in the early 2000s. Although Nigerians are very price-sensitive, competition in telecommunications is a game of quality and coverage in the long run. 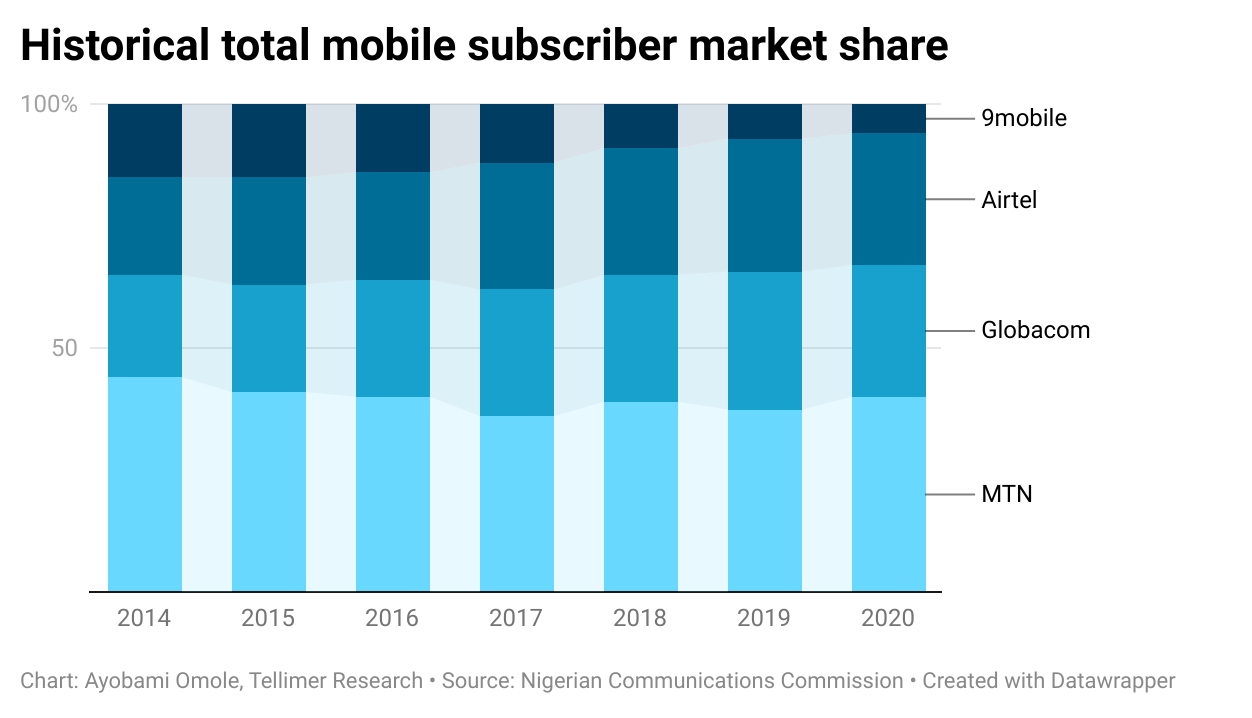 MTNN and Airtel were the first movers in the Nigerian market, after obtaining operating licenses in 2001. Although its overall market share has declined due to intense competition, MTNN has maintained its leadership, and currently controls c40% of the mobile market.

Glo and Airtel continue to battle it out for second position, each controlling c27% of the market as at end-Q1. 9mobile is in fourth position, with c6% market share. 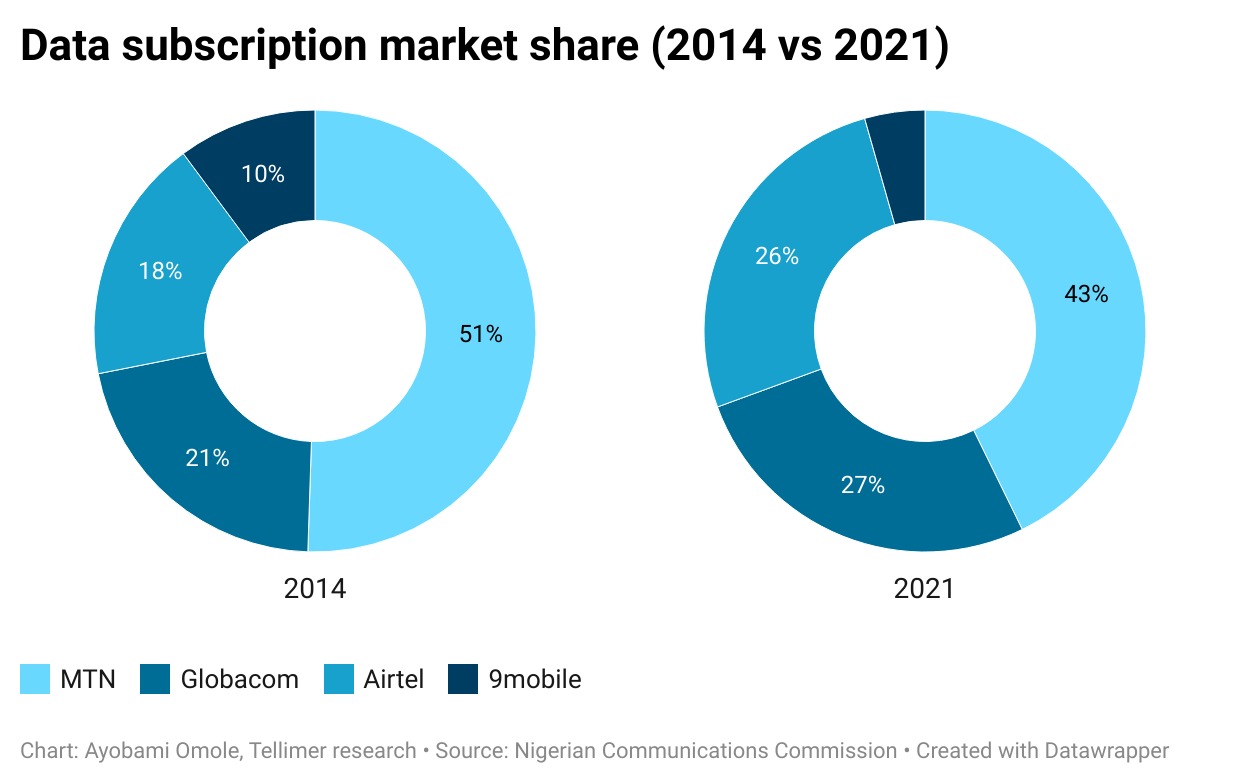 MTNN’s market leadership is also seen in the data and internet segment, with c43% of GSM market share – while Glo, Airtel and 9mobile control c27%, 26% and 4%, respectively. According to data from Facebook Insights, MTNN has over 60% of the 4G market, while Airtel – with the second-largest share – has over 30%. MTNN’s wide coverage, service quality and spectrum licenses are huge factors in the telco’s continuing market leadership.

Although 5G is not expected to be commercially available until Q4 22, the Nigerian Senate has approved the deployment of the 5G network in the country and MTNN seems to be the best-positioned telco for its rollout. First, the company conducted a 5G test as far back as 2019 and has indicated its technical readiness. Second, it can rely on the expertise and experience elsewhere in the MTN Group (we do not regard the Group's plan to sell a 14% stake in MTNN as a red flag), with its South Africa colleagues having rolled out 5G in June 2020.

Nigerian telcos are constantly investing in network improvement and expansion, following global trends, although at a slower pace.

Nigeria is one of the largest independent tower companies (towercos) markets in Africa, with various towercos owning and controlling c80% of the towers in the country. Indeed, the country is often regarded as a benchmark for other countries in terms of tower infrastructure operations and management.

Telcos operating in Nigeria are shifting to asset-light business models, focusing on service delivery, and developing new revenue streams. In line with this, MTNN, Airtel and 9mobile are taking advantage of the services of tower companies to manage their towers. Glo, on the other hand, continues to hold its c6,000 towers. The presence of tower companies offering colocation services also makes it easy for telcos to increase mobile coverage across the country and manage the operating expenses.