On Thursday, President Buhari directed the Central Bank of Nigeria (CBN) to stop issuing FX for food and fertiliser imports, expanding the list of 40+ imports currently banned from accessing FX in the official market.

Since Buhari took office in 2015, he has touted import substitution as the key to unlocking Nigeria’s vast manufacturing potential. However, he has little to show for his efforts.

Rather than directly incentivising manufacturing exports and creating a conducive environment for investment by building infrastructure, removing red tape and promoting a competitive exchange rate, Buhari has chosen the route of protectionism.

FX policy has proven to be the key tool, with Buhari using the CBN to support his import substitution goals by banning items for which Nigeria is seen to have a competitive advantage from accessing FX through official windows in the hope that domestic producers would step up to fill the void.

Setting aside the flaws of attempting to pick winners by banning strategically important imports, it is obvious that domestic production will not simply materialise out of thin air and requires a favourable investment landscape and time for investments to translate into new production.

Nigeria has made some notable progress on this front, jumping from 170 to 131 out of 190 countries in the World Bank’s Ease Doing Business index under Buhari’s tenure. However, there is still much work to be done and banning selected imports will only exacerbate supply shortages in the short run if not preceded by a meaningful increase in domestic capacity.

The government’s decision to close land borders in August 2019 to limit rice imports is a cautionary tale. Only c1% of land in Nigeria is irrigated (versus a global average of 20%) and small-scale farmers account for c80% of rice production, with vast investment needed to bring yields in line with global competitors.

In the months after the closure, rice prices spiked (anecdotally, by as much as 100%, but far less according to official data) alongside increased imports into neighbouring Benin, suggesting a rise in smuggling across Nigeria’s porous borders rather than increased local production. 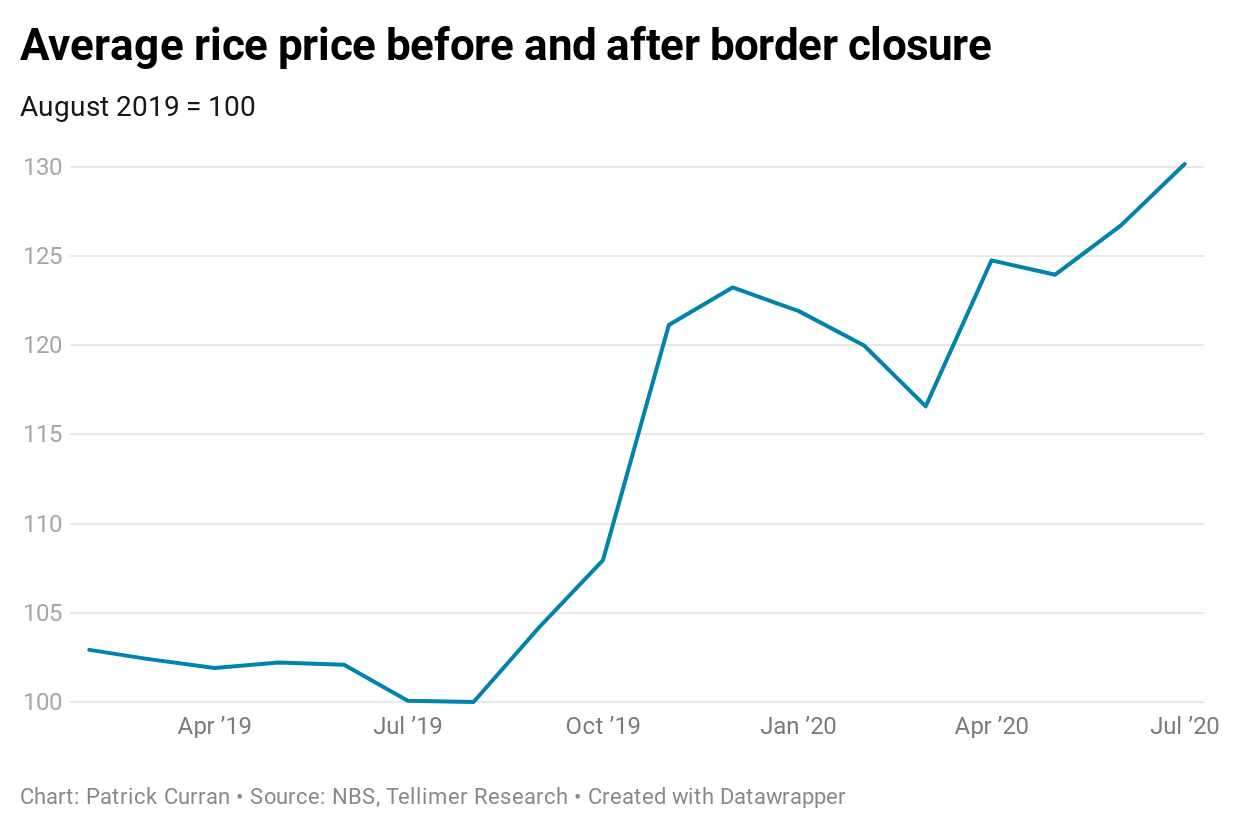 Moreover, Buhari’s industrialisation strategy clashes directly with his and the CBN’s mutual goal of FX stability. Throughout Buhari’s tenure, CBN Governor Emefiele has mobilised vast resources and constructed an elaborate regime of import and capital controls and multiple exchange rates in order to limit the impact of currency depreciation on poor Nigerians who import much of what they consume.

But maintaining FX stability in the face of high inflation and BOP pressures has led to an uncompetitive exchange rate, limiting the attractiveness of domestically produced goods. Many of the banned imports are also intermediate inputs for finished manufactures, raising input prices and reducing production for manufacturers who can no longer afford or source inputs. 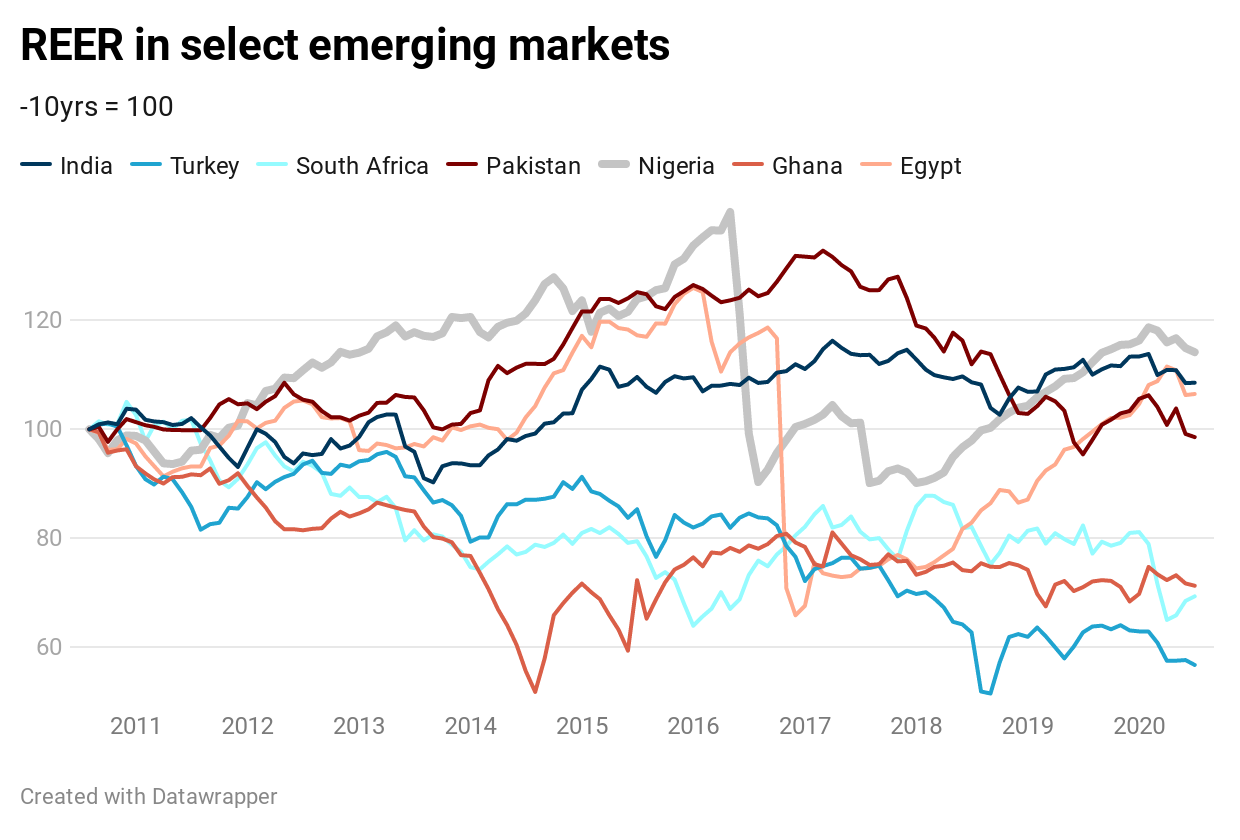 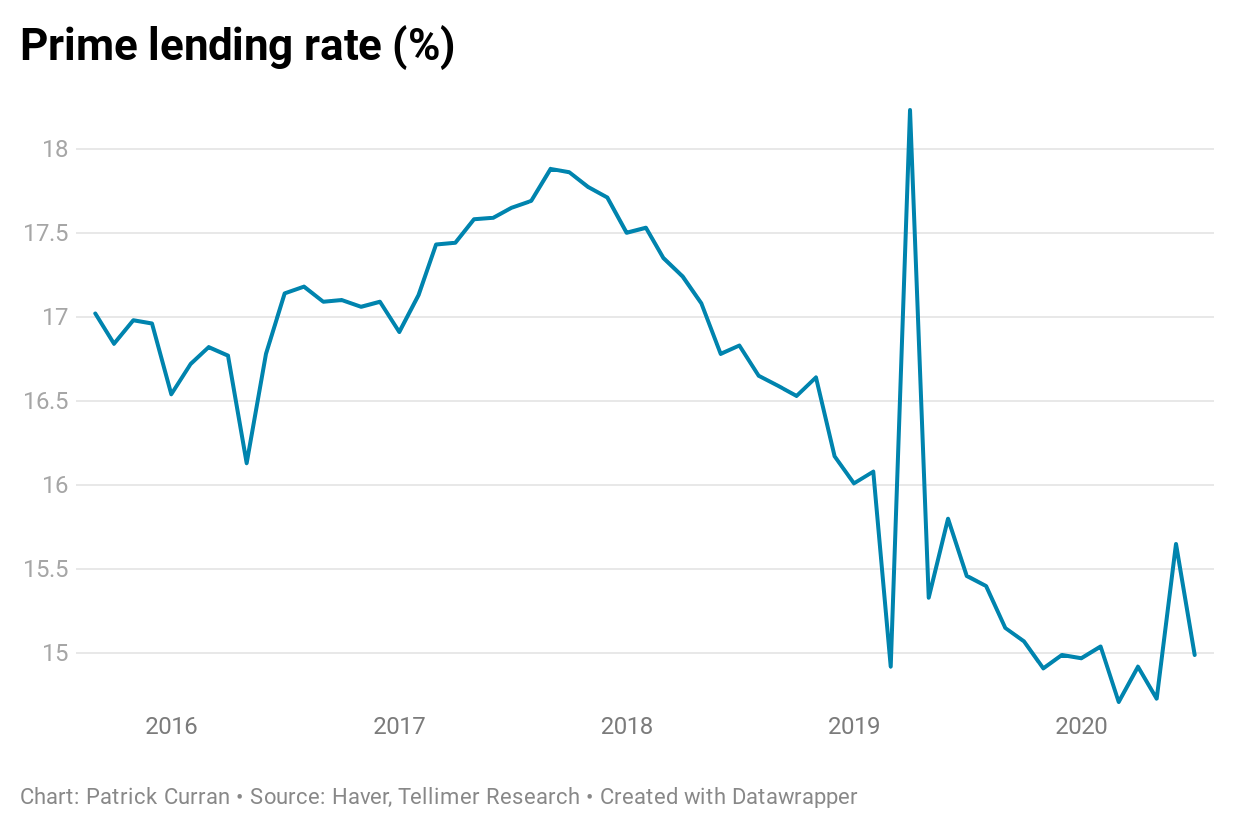 However, the counterpoint could possibly be even lower interest rates, and, during 2016-17 when T-bill yields were above 20%, there was evidence of banks reducing lending activity due to the relative attractiveness of government securities. In any case, the message is quite clear: Nigeria cannot have its cake and eat it too. It can have either FX stability or industrialisation, but not both.

In addition, while import bans may reduce exchange rate pressure, the end result is likely higher rather than lower inflation for poor Nigerians. Banning food importers from official FX windows will push demand to the parallel market, where NGN trades nearly 20% wide of the official and I&E rates (with appreciation following the resumption of FX sales by the CBN reversing in recent days – see here). This will add pressure to the parallel rate, frustrating recent progress towards exchange rate unification. 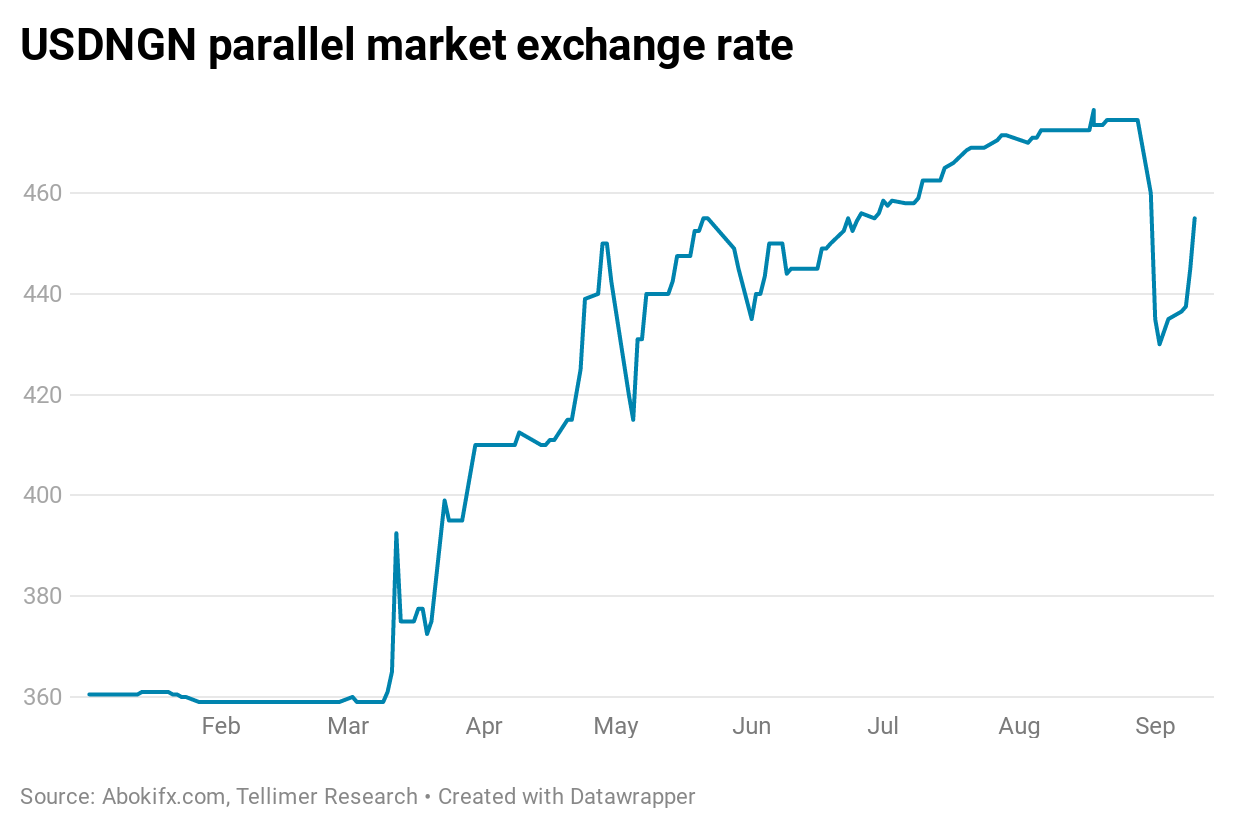 Food makes up 50.7% of Nigeria’s CPI basket, of which 13.3% is imported food. As the line item most essential to the survival of poorer Nigerians, the recent directive to ban all food items rather than a selected few could be a step too far. If all food items follow the same pattern as rice over the year after the border closure, this could add 4-15 percentage points to annual inflation (a 30% price increase times either the 13.3% imported food weight or 51.8% total food weight).

More conservatively, escalating the imported food basket by the difference between the parallel and I&E exchange rates would increase inflation by c2.7 percentage points. In any case, if the government sticks to this new policy, inflation will clearly rise from an already high base (although the overall impact might be mitigated by the Covid-induced growth contraction – see here). 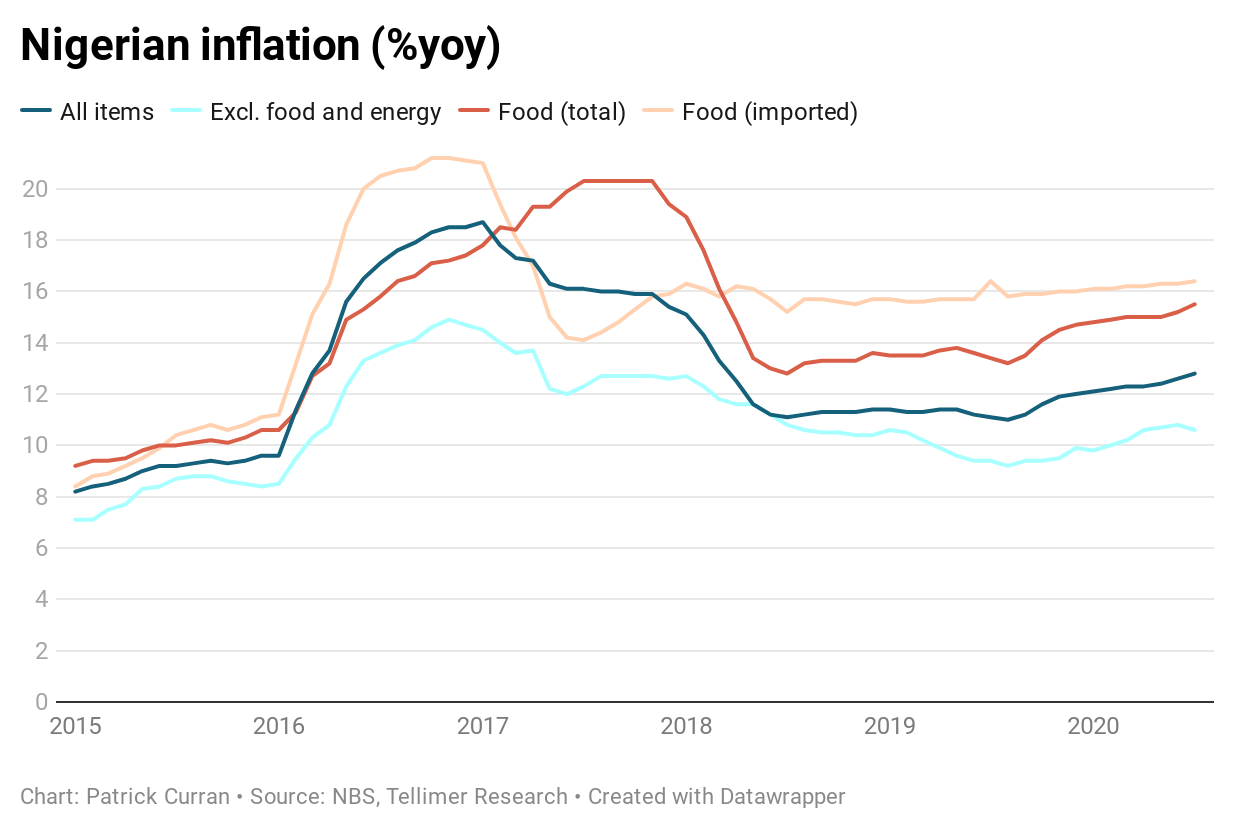 However, the news is not all bad. After the CBN added milk to the list of banned imports in February, it emerged that several companies, including Nestle Nigeria, were planning to ramp up investment in local milk production in line with the CBN’s backwards integration plan. Nigeria has also recorded cUS$1bn of investment in rice production during Buhari’s tenure, and has made some modest strides in other key sectors too (see here for Business Day’s more optimistic take).

With a huge consumer market of over 200mn, many of whom are young and educated, there are surely more companies out there willing to invest in Nigeria and tap into its vast potential. However, Nigerian policymakers need to get out of their own way first. Without improvements to Nigeria’s convoluted FX regime, investments in physical and human capital and improvements to the business environment, institutions and governance, Nigeria’s potential will remain just that.

In the meantime, we worry that the decision to double down on import bans will exacerbate inflation and make it more difficult for poor Nigerians to put food on the table at a time when the economy is already reeling from Covid and low oil prices. In addition, it seems to be a tacit acknowledgement that the CBN will continue its policy of using import and capital controls to limit FX pressure rather than acknowledging that the NGN is overvalued and liberalising Nigeria’s convoluted FX regime.

This will not earn Nigeria any goodwill with IFIs, as FX liberalisation was part of its pledge to the IMF under its US$3.4bn RCF (albeit not a binding one, given the emergency nature of the financing). Meanwhile, US$1.5bn of World Bank funding remains in limbo, with more reports last week that further FX flexibility is required before funding is disbursed. If the CBN’s earlier promise of FX rationalisation turns out to be more like jawboning to unlock funding than a genuine commitment to reform, the bar for financing may be higher in the future.

Overall, we remain sceptical of the CBN’s rhetoric on FX rationalisation and retain our negative outlook on Nigeria’s near-term economic prospects more generally.