Morocco's lower house of Parliament has passed a law to legalise the use of marijuana for medical use and the production of marijuana on an industrial scale. Recreational use in Morocco is still illegal.

In the long term, industrial exports could possibly grow to over half of the much-lauded automobile export sector and materially alleviate current account and fiscal deficits, although there are barriers, such as accessing EU markets like Germany and, obviously, the capex required to establish industrial-scale processing.

Near term, the marijuana issue may have created divisions within the moderate Islamist party, which notionally leads the government, with the next parliamentary election due in September.

The Bloomberg Global Cannabis equity index, made up of US and Canada-listed companies, is up c50% in the past year and 12% ytd.

According to the UNODC: 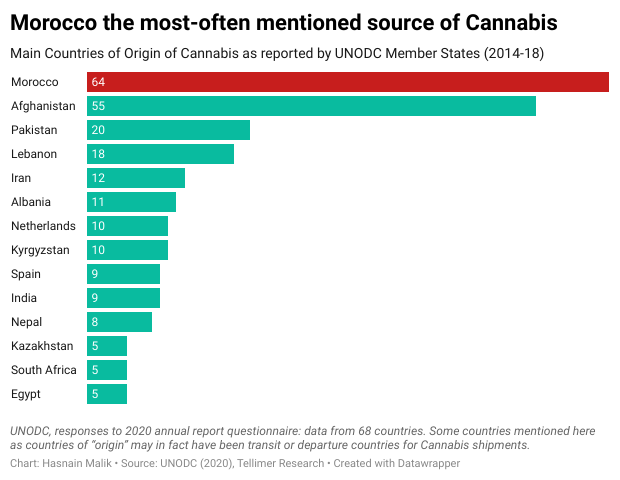 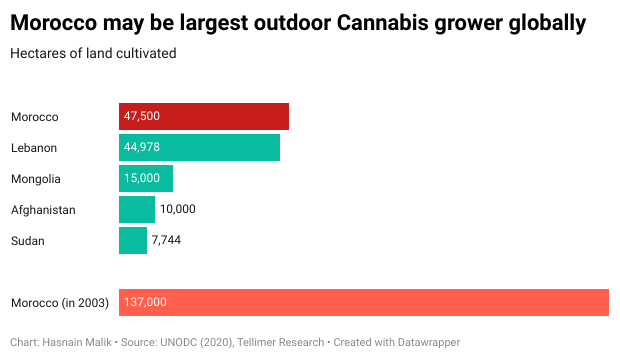 Marijuana cultivation in Morocco is concentrated in the northern Rif region, where GDP per capita is around half the US$3,400 national average. 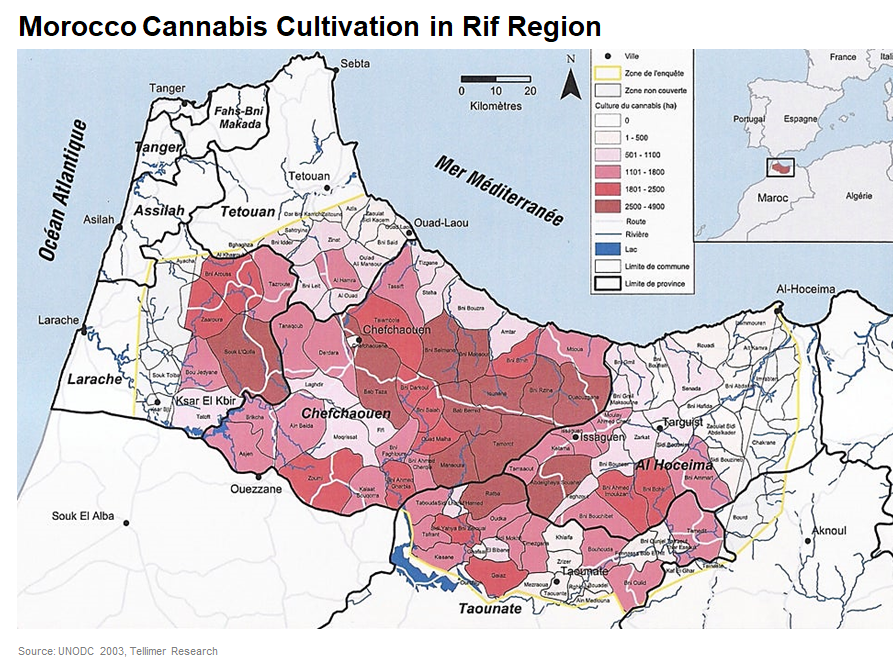 The barriers to penetrating the market are the following:

Morocco's lower house of Parliament has passed a law to legalise the production of medical marijuana. This follows a similar move in Lebanon in April 2020.

In Morocco, the law was passed with a majority of 71%, although merely 42% of the MPs voted and the leadership of the minority, ruling, moderate Islamist PJD (Justice and Development), which has 32% of seats, voiced their opposition. This suggests that this issue may have created division within the PJD.

In an echo of Lebanon, some politicians have likely voted in favour of legalisation, despite the public stance of their party, in order to win popularity in relatively disenfranchised, economically underdeveloped regions where there is distrust of central government; respectively, the PJD and the Rif region in Morocco and Hezbollah and the Bekaa Valley in Lebanon.

Morocco's next parliamentary election is due on 8 September. While the PJD has been the largest party since 2011, no political party dominates politics (eg the current governing coalition consists of parties spanning moderate Islamists, independents, monarchists and socialists) or veers too far from the agenda of the King and the Royal Court.

Although post-Arab Spring constitutional reform in 2011 ceded some power to Parliament, with the largest party able to nominate the prime minister, and to the judiciary, which was granted more independence from the King, the King and the Royal Court remain dominant. Constitutionally, the King: 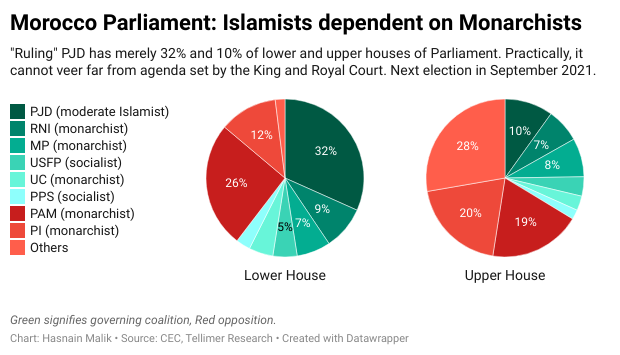 Measured by the local Moroccan All Shares index (MASI), equities are up c40% in the past year and 9% ytd.

Trailing price/book is 2.6x (for merely 8.3% ROE). This PB is on par with the five-year median. Peak ROE in the past five years is 13.6% in 2017: ie Morocco looks expensive on an absolute basis even if there is a return to peak profitability.

But local investors dominate trading activity (over 90%) and, for them, the more relevant metric is likely the difference between the consensus forward dividend yield on equities (4.1%) and the real interest rate (0.1%), which remains sufficiently attractive.

Morocco's spat with Germany is a setback if it is over Western Sahara, March 2021