Banxico’s minutes are more hawkish. In our view, the document provided valuable and more detailed information about the central bank’s stance, especially on the different opinions among Board members. Broadly speaking, we saw even more concerns about the potential impact from new shocks to inflation. Among them, it was highlighted the global tightening of monetary policy and financial conditions –including the Fed, which will hike by 50bps in at least its next two decisions–, higher geopolitical uncertainty, and the impact to global trade from new lockdowns in China, among the most relevant. More importantly though, we noted a more restrictive bias from all members. This includes Governor Victoria Rodríguez and Deputy Governor Galia Borja. Since the decision, we warned that they can be decisive to determine the most likely magnitude of the hike in the next meeting (see next section). Given the tone of the minutes and recent interviews, our assessment of each members’ views and the balance of the Board, as well as our forecasts for the Fed and Mexico’s inflation –with annual core inflation still moving higher at least until the 2nd half of July–, we expect a faster and more aggressive hiking cycle. We believe there is enough consensus about the need to reach a restrictive monetary policy promptly. In this backdrop, we now expect a 75bps rate hike to 7.75% on June 23rd (previous: +50bps). Moreover, we see the year-end rate at 9.50% (previous:9.00%). We keep seeing the latter level as the terminal rate of this cycle, albeit it will be reached before our previous forecast, which was at the beginning of 2023.

More clarity about the most likely move. After the statement, and considering member’s participations before this release, we thought the most relevant comments would be from Governor Victoria Rodríguez and Deputy Governor Galia Borja. This is because their votes may be decisive for the result of the next meeting. In this context, and in a somewhat unexpected fashion, we believe their views were much more hawkish. This constitutes the most important factor behind our adjustment for the reference rate path. On remaining members, we were more convinced about the bias of Deputy Governors Irene Espinosa –given her diverging vote–, Jonathan Heath –because of comments in Twitter and in interviews with Bloomberg and El CEO– and Gerardo Esquivel –taking into account his dovish skew. We consider this was validated by the document. Up next, we present a table with our assessment about each member comments: 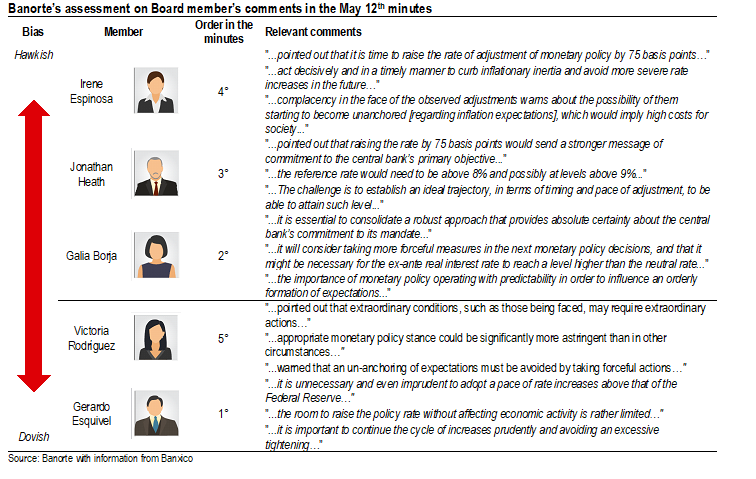 Debate on the pace and extension of the tightening cycle. We consider the three points to highlight are comments on: (1) The ex-ante real interest rate; (2) the level of the terminal rate; and (3) benefits of guiding expectations. Regarding the first point, we believe Heath stated that the reference rate needs to be above 8%, –consistent with his recent declarations that it could go up to 10%– considering inflation expectations. This is addressed by calculating the ex-ante rate, placing the upper threshold for neutrality at 3.4%. Based on our estimates, an additional 75bps hike would take the real rate exactly to that level. Meanwhile, Borja argued that, relative to previous cycles, the adjustments in this one has not achieved a proportional adjustment between the ex-ante real rate and the institution’s hikes. Based on this, more forceful actions are justified in upcoming decisions. On the terminal rate, Esquivel's comments suggested that the rate should only reach neutrality, as there is not much room left to increase the rate without impacting economic activity. Meanwhile, Heath was more emphatic that reaching restrictive territory may be needed –especially given his comments outside of these minutes.

In addition, at least three members spoke about the benefits of forward guidance. In our view, this was precisely one of the factors that stopped Heath from voting for +75bps on this occasion, since he assessed that it would surprise the market and could set a new pace of adjustments. Borja endorsed this tone, alluding to the fact that predictability in their decisions is relevant. She considered that their communications should convey the message about the possibility of faster adjustments –already included in the statement–. Lastly, Espinosa even argued that surprising on the side of prudence would not be necessarily bad since it would portray a central bank whose priority is to control inflation, it was not entirely ruled out by the market, and financial instruments price-in even a greater adjustment in rates for the rest of the year.

The market reaffirms its expectation of +75bps in June. In our view, the market remains comfortable with the current pricing for Banxico, with a modest reaction in local rates after the minutes. In this sense, short-term Mbonos lost 4bps, while long-term tenors gained 2bps, resulting in a further curve flattening. Similarly, TIIE-28 IRS reflected the same dynamics. In particular, the 1s2s spread moved into negative territory (-4bps) for the first time since August 2020. In this backdrop, the market consolidated its view of a 75bps hike in June. In addition, it sees two 50bps increases in August and September, as well as +25bps in the last two meetings of the year. As a result, the tightening cycle would conclude with the benchmark rate at 9.25%, slightly lower than our 9.50% call. In terms of strategy and given our new view of the hiking cycle, we expect nominal curves to flatten further. Specifically, we could see even greater inversion between shortest tenors (less than one year) and the belly in both Mbonos and TIIE-IRS. Despite of this, we believe long-term Mbonos continue to look more attractive, especially the Nov’42 and Nov’47 securities. Their attractiveness has improved at the margin given the possibility of a more aggressive cycle, which could contribute to a stronger reduction in mid- and long-term inflation expectations. However, high volatility limits their attractiveness for directional positions. Finally, short-term Udibonos have traded more defensively, which has led to a significant compression in breakevens, although they have not yet reached sufficiently attractive levels for new directional trades.

Meanwhile, the Mexican peso was stable, trading slightly below 19.80 per dollar and reaching up to 19.76 after Banxico’s minutes. The peso has traded defensively compared with EM peers, accumulating an appreciation of 3.7% year-to-date. This is only behind BRL (+16.5%), RUB (+16.3%) and PEN (+9.5%). However, given the current situation, we maintain our view of USD structural strength on a more hawkish tone from the Fed and the market’s risk-off mood. Given a more aggressive stance by Banxico, we do not rule out further peso gains in the short term.This is possible even if we see limited space for a strong appreciation beyond the 19.70 congestion zone, especially as our models suggest a 7.9% overvaluation. Regardless of the juncture, we see the current range of 19.70-19.80 as sufficiently attractive to buy USD for short-term tactical trading positions.