We set out our thoughts on Maldives following our virtual discussions with the IMF team during the recent IMF/World Bank Spring Meetings. We would like to thank IMF staff for their time. The views we set out here are our own. We assign a Hold on MVMOFB 9.875% 2026 with a yield of 11.4% (price US$95.2) on a mid-price basis as of cob 28 April on Bloomberg.

There seems little change in Maldives compared to our discussions at the time of the IMF/WB Annual Meetings last October, and that isn't necessarily a good thing in our opinion. Indeed, if anything, the situation is worse as the intervening period has not been used to implement a fiscal consolidation plan to ease the fragile debt situation while external conditions have worsened due to the war in Ukraine – threatening the post-pandemic recovery in tourism and posing a risk to inflation from higher food and fuel prices, while the tightening in global monetary conditions could limit its financing options.

Moreover, six months on, we are still waiting for the publication of the staff report following the 2021 Article IV last autumn. We can only assume the authorities are withholding their consent, for reasons unknown. We can understand that the war in Ukraine makes some of the macro assessment redundant, but there was still plenty of time before then. That said, the authorities' close engagement with the Fund continues, including through technical assistance. 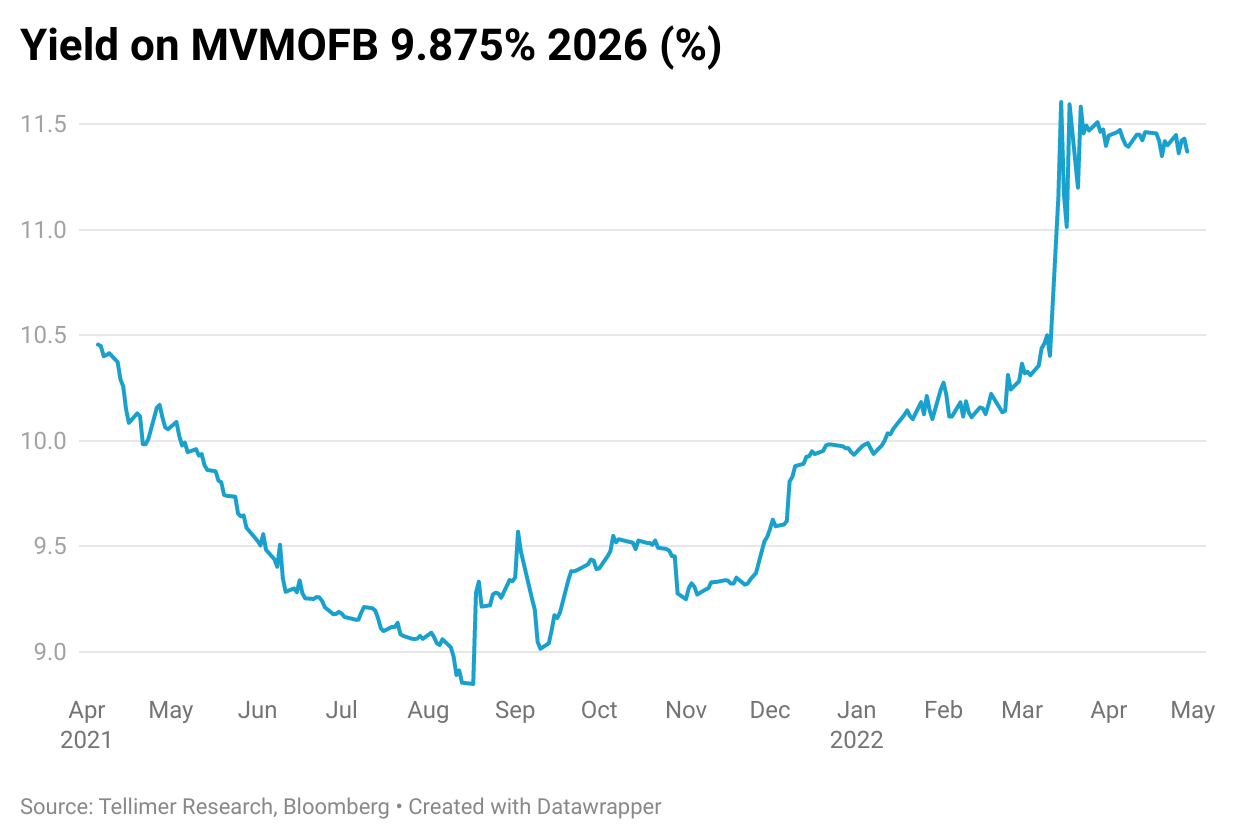 Maldives enjoyed a rapid rebound in growth last year as its tourism dependent economy has reopened after the Covid pandemic. Tourism arrivals rose 138% last year (2021 over 2020), reaching 1.3mn visitors, based on official data, although this was still some 20% below pre-pandemic levels.

The main channel for the impact of the war in Ukraine on the Maldives economy is via tourism, both directly in terms of Russian visitors, and indirectly in terms of global appetite to travel. Russia accounted for 17% of arrivals in 2021, based on official data, with Ukraine a further 3%. Overall tourist arrivals were running about 50% higher than last year (Jan-Feb), based on official data, and Russian visitors were a bit higher than last year, but this likely reflects pre-war bookings.

In addition, indirect channels include higher food and energy prices, as well as disruption to supply chains, which could increase inflation (currently just 0.6% yoy as of February) and/or subsidy spending, and the impact of tighter global financial conditions. Higher prices could even lead to social pressures, as we've seen elsewhere.

Meanwhile, international reserves, after being boosted by the SDR allocation last August and tourist revival, have come under pressure. Reserves have fallen by 24.6% since September 2021 (based on MMA data through February 2022), and now stand at US$766mn. Maldives paid back the remaining US$250mn RBI swap at the end of last year and is expected to contract a new US$100mn swap from the RBI in 2022.

The main policy challenge remains securing fiscal and debt sustainability. The overall fiscal deficit, projected at 13.5% of GDP this year in the WEO (the government's 2022 Budget targets 11.2%), is twice as large as it was pre-pandemic (when it averaged a still high 6% over 2018-2019), while debt has nearly doubled as a share of GDP (now over 120%). Debt/GDP increased due to higher government spending and lower GDP.

This informs the size of the required fiscal consolidation with the need, at a minimum, to return the deficit to pre-pandemic levels.

This will require rationalisation of spending. While revenue as a share of GDP, at about 25%, is little changed, spending/GDP has increased sharply by about 9ppts, from 33% to 42%. This could be difficult to reverse, as spending becomes sticky.

However, we do not see any sign of an expenditure-based fiscal consolidation. Rather, the continuation of a wide fiscal deficit reflects the authorities' ambitious capex plans and there may be little political appetite for fiscal consolidation ahead of next year's elections, amid signs that pre-election spending is already underway.

Maldives was deemed to be at high risk of debt distress, according to the IMF assessment in April 2020 (which admittedly is pretty old). Public debt was 123% of GDP in 2021, as per the IMF WEO (this is about the same as government figures, based on public and publicly guaranteed debt). The WEO projects public debt to increase modestly this year to 129%, and decline gradually to 121% by 2027, on essentially unchanged policies and a gradual narrowing in the deficit. However, such high debt leaves Maldives vulnerable to external shocks and a faster adjustment may be better.

In addition, large fiscal deficits mean large financing requirements, although financing options are limited, and it is not clear to us that the strategy of market borrowing that worked last year, for example, via the 2026 Sukuk (which filled a big part of the deficit), can be repeated so easily this year. The 2022 Budget suggested financing will again be split half and half between foreign and domestic financing.

Moreover, access to finance will be more challenging given tighter global monetary conditions. Indeed, with double digit yields on the 2026 Sukuk, the international market would appear closed to Maldives (although perhaps a private placement, aimed at GCC and Asia, which is a natural source of funding, couldn't be ruled out). If market borrowing is not possible, or too expensive, that may raise questions about how the deficit will be funded. Bilateral donor funding, eg from India and China, may help. The government could also seek to use more concessional finance and climate resilience funds. But it is not clear if this will be enough.

The authorities have not requested an IMF programme, and next year's election may constrain appetite for one.

We assign a Hold on Maldives (Caa1/-/B-), with a yield of 11.4% on the MVMOFB 9.875% 2026 on a mid-price basis as of cob 28 April on Bloomberg (mid-price US$95.2). The bonds have admittedly performed well over the last year – with a total return of 6.8% compared to -4.1% on the Bloomberg EM Aggregate Index since issue, although this is mainly due to the high coupon. The bonds have also outperformed YTD, -2.3% vs -7.8% on the index. This might be due to strong support from a sticky sukuk investor base in the region and Middle East.

Nonetheless, even then, the bonds have fallen about 5pts YTD, mostly since Russia's invasion of Ukraine (although curiously in mid-March rather than in late-February when it happened), and haven't recovered unlike some other markets. We think investors will need to digest the impact of the war and Russia's economic collapse on Maldives' tourism market and the growth and fiscal implications, and what that means for debt sustainability, amid limited financing options, for either a positive or negative catalyst. But time may not be on its side. Absent a positive exogenous shock (or perhaps a severe negative shock that forces an adjustment), it is not clear to us that Maldives is willing and able to implement a comprehensive and concerted fiscal adjustment, especially ahead of an election, and rather than take pre-emptive action, the risk is that it sleep-walks into a debt crisis – and, being eligible, presumably a Common Framework treatment. 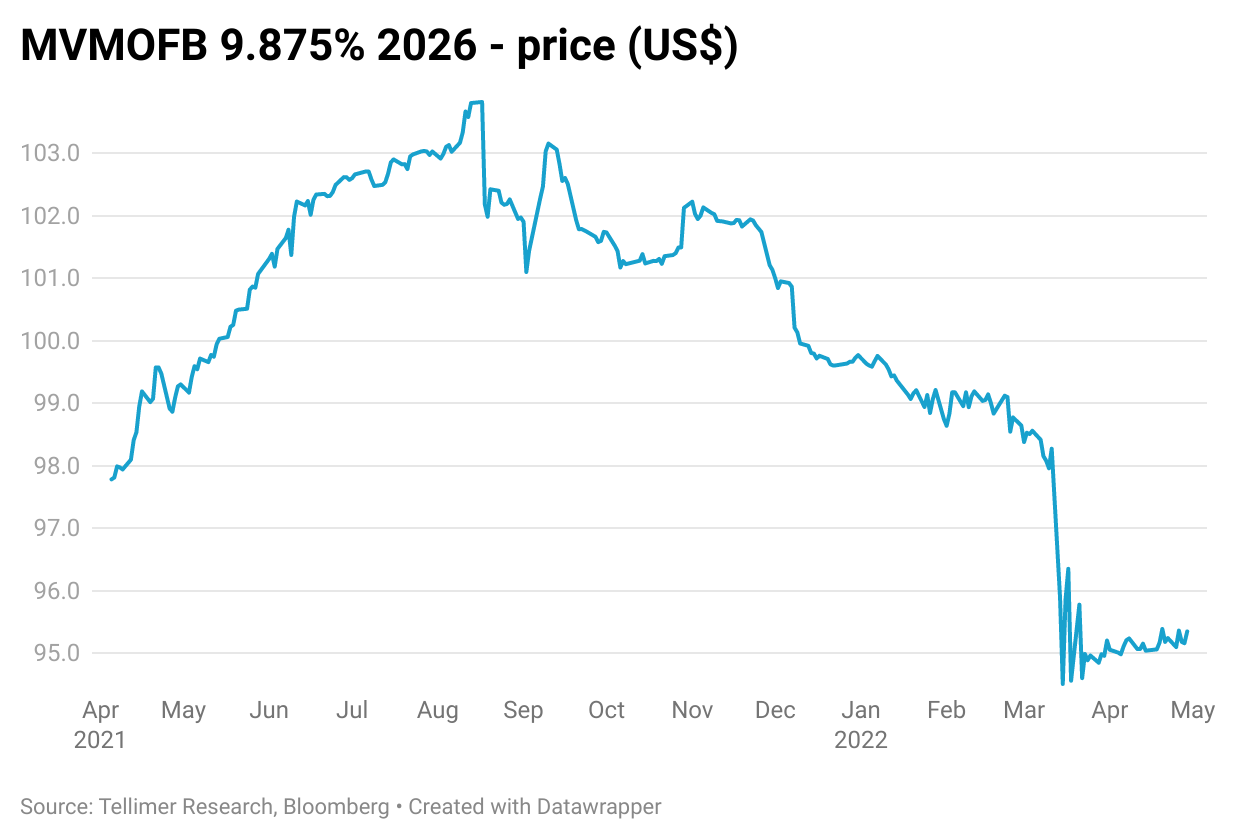