24 May 2022
Published by
Tellimer Research

The results of Lebanon’s parliamentary election on 15 May are in, with 49% of eligible voters participating (broadly unchanged from 2018). While estimates of the number of seats for each party and/or bloc vary by source due to definitional differences, the pro-Hezbollah amalgamation of parties – which held 71 of the 128 seats in the parliament elected in 2018 – has dipped below the 65 seats needed to form a majority, with an estimated seat count of around 60 +/- a couple of seats, depending on the source (see here and here, for a couple).

The decline is due largely to a rise in independent candidates, who now hold a record c16 seats, up from just one in 2018. While Hezbollah retained its 13 seats, its allies in the Amal Movement and Free Patriotic Movement lost c2 seats and c11 seats, respectively. Meanwhile, the anti-Hezbollah Lebanese Forces gained c6 seats to become the biggest bloc in parliament, offsetting the c13 seats lost by the Future Movement (previously the main anti-Hezbollah bloc) after former PM Saad Hariri decided to boycott the election (7 former future FM members retained their seats by running as independents).

Without getting too bogged down in the numbers given variations in the reported figures, it is clear that Lebanon’s newly elected parliament is historically fragmented. The New Arab newspaper amalgamates the 25+ parties and 15+ independents into several broad groupings, estimating 59 seats for the pro-Hezbollah bloc (including the Amal Movement, FPM and other allies), 29 for the anti-Hezbollah bloc (including the Lebanese forces, Progressive Socialist Party and other allies), 33 for the anti-establishment bloc (including independent and civil society candidates and the Kataeb Party), and the 7 former FM members who ran independently.

While the rise in independent candidates is a clear signal of dissatisfaction with historical parties after years of severe economic mismanagement (which the UN has called a “human rights violation” given the scale of the ongoing crisis), many old-guard politicians kept their seats (including two who were under investigation for their alleged roles in the Beirut port explosion before the investigation was effectively quashed). Further, a fragmented parliament could make it difficult to agree to form a government, with Lebanon going 13 months without a government last year despite Hezbollah’s majority in parliament.

Against this backdrop, there is little certainty on if and when a government will be formed, which will continue to delay needed reforms to secure an IMF programme, restructure its debt and financial sector, and revive its moribund economy. Outgoing PM Najib Mikati has said that he is ready to return as PM (who must be a Sunni Muslim under Lebanon’s confessional political system) if he was certain of a quick cabinet formation, which could provide a degree of continuity in the reform process. Agreement on the appointment of a Speaker of Parliament (who must be a Shiite Muslim) could be a signpost of progress towards government formation, but it is truly anyone’s guess how long the process could take.

Despite the outgoing cabinet’s approval of a broad recovery plan in its last session on Friday, a creditor presentation earlier this month showed that none of the nine prior actions required to secure the IMF programme has been completed, and a fragmented parliament could have a difficult time pushing through the required reforms (especially the politically fought restructuring of the financial sector) even if a government is expeditiously formed.

Further, disagreements over who to appoint as President (who must be a Maronite Christian) when Michel Aoun’s term expires in October could provide another flashpoint for disagreements and distractions.

In the meantime, Lebanon’s economic crisis will continue to worsen. Inflation moderated from 208% to 206% yoy in April but remains alarmingly high, while the UN estimates that unemployment has nearly tripled since the start of the crisis to 30% and more than three-quarters of the population is now estimated to be impoverished. The LBP has resumed its depreciatory path in recent weeks, pointing to post-election concerns about the path forward. Lebanon’s 10yr eurobond has also softened by c0.7pts since the election, pointing to rising creditor concerns (though lack of liquidity means one shouldn’t read too much into such minor short-term movements). 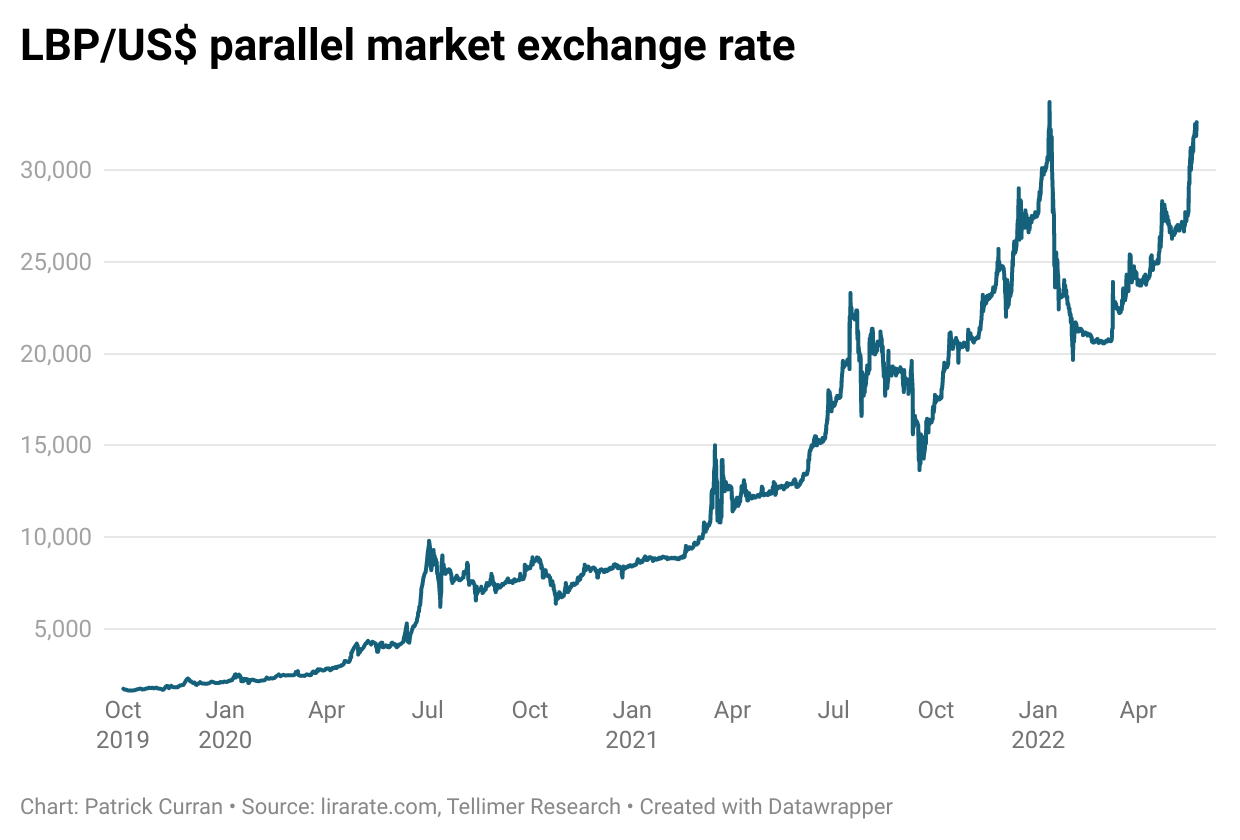 While bonds are currently pricing in the government’s proposed 2020 restructuring plan (including 75% haircuts, 3% coupons, and 5yr grace period) at an exit yield of 14%, there is much uncertainty on the path forward. Even if a government is quickly formed (which is not guaranteed, or even particularly likely), the road ahead will be long and difficult as Lebanon’s fragmented parliament implements the laundry list of difficult reforms required to obtain Executive Board approval of its IMF programme and begin engaging with creditors to restructure its debt and get the economy heading on a sustainable path. 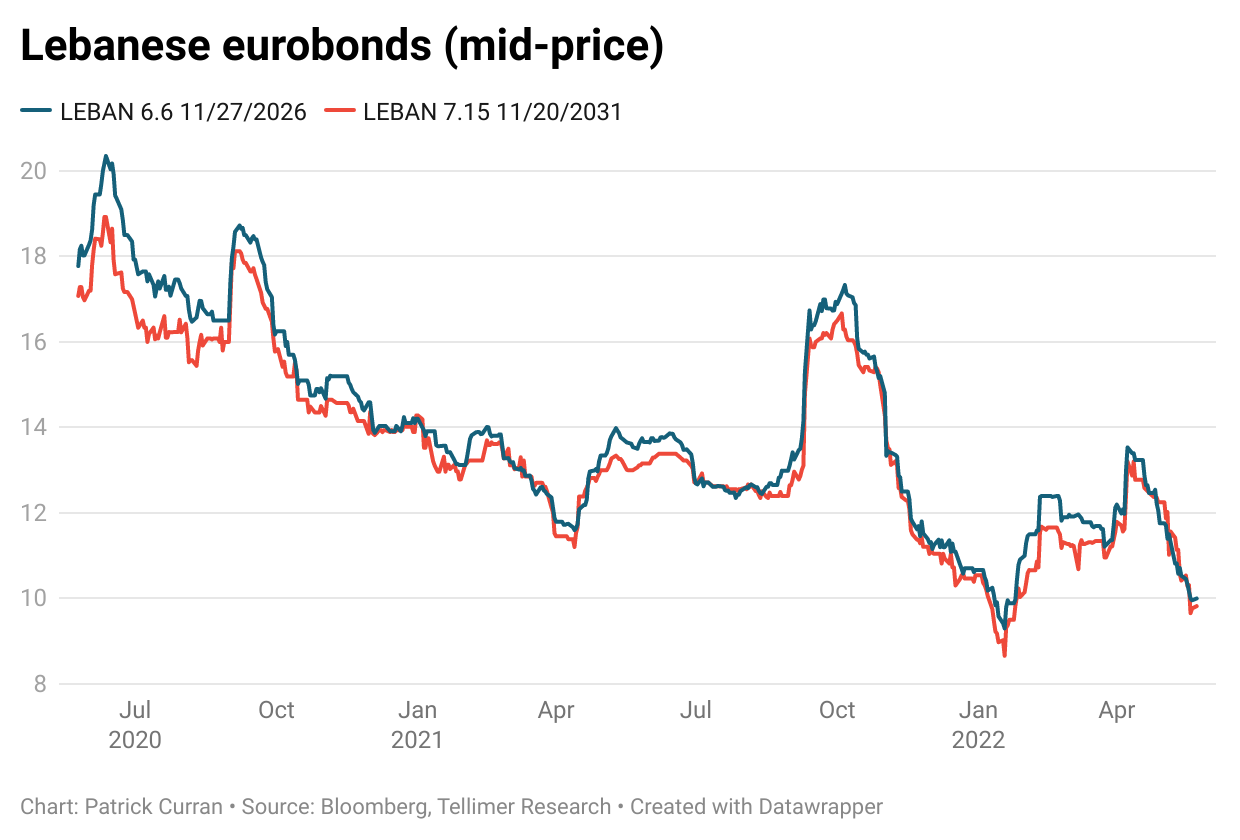 Lebanon’s creditor presentation outlines the difficult path ahead, May 2022