Kenya is the latest African country looking to restructure its debt

Fixed income markets stabilised yesterday as uncertainty surrounding the UK’s policy path has been reduced. US Treasuries ended the day slightly richer after some choppy price action, with long-end tenors underperforming, which slightly steepened spreads from the belly to back end of the curve. The benchmark 10yr managed to close just above 4.000%, while the 2yr remained near 4.450%, keeping the 2v10 spread deeply inverted as US recession risks remain high given the hawkish stance of the Fed at the moment. The relative calm in the bond markets gave risk assets a boost on the day, with equities finishing strongly in the green. Focus now turns to the US housing data and Fed Beige Book scheduled for release today. The latter may provide some evidence that the US economy is slowing, which may help keep the bid tone for bonds alive into the latter half of the week.

Egypt: As a result of the expat customs-free car import initiative, Finance Minister Mohammed Maait forecasts a total of $2.5bn to flow into the Egyptian economy. The initiative allows Egyptians living abroad to have one personal-use vehicle shipped to Egypt without having to pay customs duties or taxes. According to the draft law, expats can invest the value of saved customs duties and taxes in foreign currency in a five-year certificate of deposit, but without earning interest. These expats will be able to recover the deposit in Egyptian pounds at its price at the end of the period. The exemptions are valid for a four-month period starting on the day the law comes into effect. The expat customs-free car import initiative is the latest measure by Egyptian authorities to try to boost foreign exchange reserves that have come under pressure this year.

Botswana: Botswana has resumed beef exports to the EU after partly lifting a foot-and-mouth ban. According to a statement from the Ministry of Agriculture, exports will be allowed from cattle bred in seven of the country’s 19 agricultural zones, with some areas closest to where an outbreak was detected remaining under suspension. Botswana is a major supplier of beef to the EU region, and the partial lifting of the ban will allow Botswana to earn more foreign currency. Cattle exports are a key source of foreign currency for Botswana, after minerals and tourism.

Kenya: Njuguna Ndung’u speaking to a parliamentary panel vetting his nomination for the post of finance minister, said that Kenya plans to use cheaper loans from lenders such as the World Bank to allow it to retire expensive domestic loans and create funds for much-needed spending on items like food. Ndung’u, however, stopped short of providing details of the amounts Kenya will borrow on concessionary terms. Kenya’s public debt stands at almost 70% of GDP, having been driven by years of debt-fuelled infrastructure projects. Ndung’u also said that once the government reduces the high cost of servicing domestic debt, it will secure room to provide food to the poor and start to “signal” fiscal consolidation. Ndung’u is President Ruto’s nominee for the post, and if his nomination is approved, he will be sworn into office in the next two weeks.

Uganda: In a report, the Uganda Coffee Development Authority said that its coffee exports dropped for the first time in four years in the 2021-22 season after a drought in most growing regions cut yields. Shipments in the 12 months through September shrank to 5.85mn bags from a record of about 6.5mn bags a year earlier. That’s the first annual decline since the 2017-18 season. Nevertheless, Uganda earned $876.4mn from its coffee exports, up from 39% a year earlier due to higher global prices. Going forward, the UCDA expects the dip in yields may be short-lived, with output from the 2022-23 season forecasted to potentially climb to an all-time high partly due to improved rainfall. Increased output and exports will provide Uganda with much-need foreign currency income to support its currency, which has come under pressure this year.

Oil: Oil prices fell to a two-week low yesterday, with Brent dipping below the $90 per barrel level as concerns over Chinese demand weighed on sentiment within the market. China delayed the release of some important macroeconomic figures, which indicates that growth in the country is falling well below expectations, and politicians are trying to limit the damage. China’s oil imports have already been declining through the year so far, averaging just 42.7mn barrels a month as opposed to over 45mn in 2020. The authorities have pledged to provide support to the economy in the months ahead, but scepticism is high that the announced measures will be able to stave off a major slowing of the world’s number two economy.

The Ghanaian cedi remained under pressure yesterday, with the currency closing at a fresh low amid strong dollar demand. The slump added to the cedi’s year-to-date drop of over 45% against the USD, making it the worst-performing African currency tracked by Bloomberg. 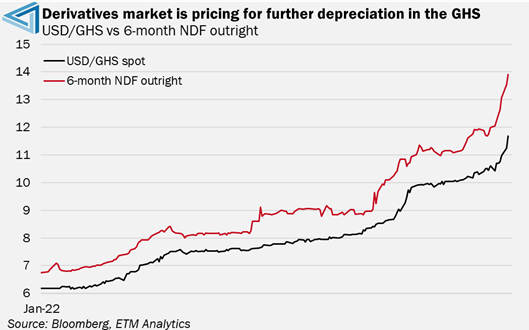 Strong dollar demand amid limited supply has been one of the factors that have pressured the cedi. The Bank of Ghana has been unable to meaningfully support the cedi amid declining foreign exchange reserves. Moreover, heightened fiscal and debt sustainability concerns have triggered a rotation out of Ghanaian bonds and added further downside pressure to the currency. Data from the Central Securities Depository Ghana showed that foreign holdings in outstanding domestic government and corporate bonds fell further to 12.31% at the end of August, the lowest on record from a 2022 high of 17.31% in April.

With no new developments on negotiations between Ghana and the International Monetary Fund from the IMF annual meetings that ended last Sunday, Ghana’s fiscal outlook remains worrying. As mentioned in previous commentary, securing an IMF program as soon as possible remains key to addressing Ghana’s deteriorating macroeconomic outlook and supporting the cedi. In the absence of a program that alters the current fiscal trajectory, the bearish bias in the cedi will likely persist in the near term. This view is corroborated by the derivatives market, which shows that further significant cedi depreciation is priced in already.

Never before has there been such an aggressive and coordinated tightening in global monetary policy. The central banks have recognised that too much stimulation applied to the global economy through the pandemic has yielded some negative consequences. Inflation is the most prominent and will have the most severe repercussions for the lower-income population struggling to adjust to negative real wages. 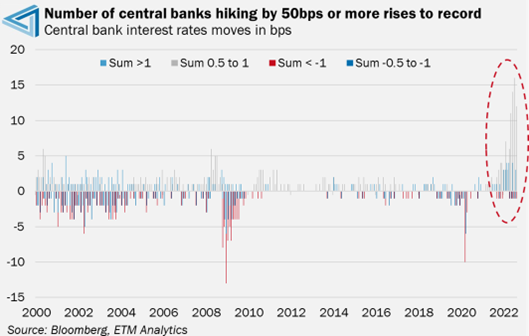 It is, therefore, both justified and important that inflation is brought back under control. However, if there is a concern, it is that the central banks are behaving so aggressively that they threaten the labour market with a recession which will see poor income groups swap stress levels about the cost of living to stress about employment and jobs.

Inflation worldwide remains elevated. However, momentum driving inflation has dissipated considerably, and for the first time, some of the inflation readings have retreated from their highs. Arguably even more encouraging is how inflation expectations have softened and appear to be dropping sharply. Investors have bought into central bank efforts to reduce inflation and now anticipate that they will succeed, another factor that will soften their aggressive monetary policy stance.

Macroeconomic: African exporters could start to direct goods away from South African ports

The unrelenting transport union strikes in South Africa, Southern Africa’s main export hub, have caused massive delays in regional exports. Regional exporters feel the cost of the delays and are therefore forced to consider alternative options. On Monday, a wage deal had been agreed upon, and the expectation was for the strikes to stop immediately. However, yesterday, one of the smaller Transnet unions vowed to continue strikes until Transnet agreed to a no-retracement clause. 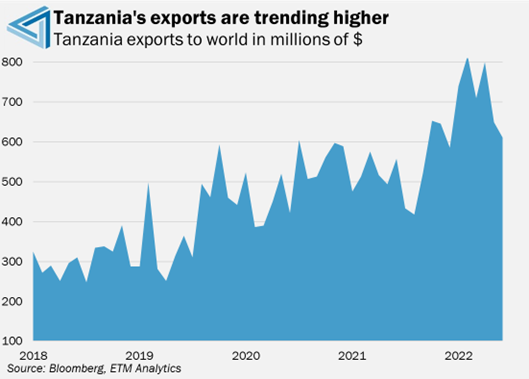 In 2020, due to SA’s strict covid-19 lockdowns, many miners from the African copper belt, the area spanning from northern Namibia to the southern Democratic Republic of Congo, were diverted away from South Africa and redirected to Tanzania’s Dar es Salaam port. Ports in Beira, Mozambique, and Walvis Bay, Namibia, also benefitted from the commodities redirected shipments.

The current disruptions at South African ports could result in African miners looking for alternative ports to export from once again. Efficient logistical systems are essential in ensuring countries benefit as much as possible from exports. The economies of many Southern African countries are dependent on exports. Therefore, these countries will unlikely be unwilling to risk the cost of further disruptions.