It was quite a volatile session for USTs yesterday, with yields initially surging to keep up Tuesday’s momentum. However, the latter half of the session saw all of the gains made reversed, with the market ramping up expectations that the US is heading for a period of weak economic growth. The benchmark 10yr reached a high of 2.85% during the day yesterday, but has since fallen back to just over 2.70%. The shape of the curve, meanwhile, has inverted even more deeply, with the 2v10 spread now around -36bp. Levels such as this have not been seen since 2000. This bearish outlook for the economy suggests that the USD may struggle to recover most of its recent losses, but concerns over a global recession will also limit the ability for riskier assets to capitalize on the weaker USD.

Yields in Europe, meanwhile, ended the session higher yesterday, tracking the earlier moves of the US market. The bias there was also for flattening of the curves, with front-end UK rates rising to near 1.820% ahead of today’s BoE meeting. The outcome of the meeting is quite uncertain at the moment, but if the bank maintains its hawkish stance and signals growing risks to the economy, the curve could shift ever closer to inverting, with the 2v10 spread currently just 9bp.

East Africa: To help overcome a food crisis in the Horn of Africa, the World Health Organisation has appealed for $123.7mn. According to WHO, more than 80mn people in countries including Kenya, Uganda, and Ethiopia are food insecure, with more than 37.5mn of them being classified as being in a stage of crisis where they have to sell their possessions to feed themselves and their families. WHO further said conflict, changes in climate and the coronavirus pandemic have resulted in the region becoming a “hunger hotspot with disastrous consequences for the health and life of its people.” The fund will go toward urgent measures, including improving the region’s capacity to detect and respond to disease outbreaks and provide treatment to sick and elderly malnourished children. Aside from a humanitarian crisis, food shortages have contributed to inflationary pressures in the region.

Kenya: The Kenyan government reportedly owes oil marketing companies KES39.6bn for the June to August period. Oil marketing companies are claiming KES25.3bn for diesel sales, KES12.9bn for gasoline, and KES 1.46bn for kerosene. The arrears are from June-July and July-August monthly pump price reviews. The subsidy introduced last year in October by the government was meant to cushion Kenyans from high fuel prices. However, National Treasury has been struggling to keep up with the payments and in June said that gradual steps would be taken to eliminate the subsidy possibly within the next financial year as it threatens to inflate public debt to unsustainable levels and disrupt plans to ease the burden of liabilities.

Mauritius: The Bank of Mauritius is planning to sell 52.5bn rupees  ($1.16bn) in domestic debt on behalf of the government. The issuance comprises 15.2bn rupees in three-year treasury notes, 8.3bn rupees in five-year bonds, 10bn rupees in seven-year bonds, and 19bn rupees in 10-,15- and 20-year bonds.

Uganda: Bank of Uganda Deputy Governor Michael Atingi-Ego said that the bank is prepared to “do whatever it takes” to restore inflation to low and stable levels to maintain macroeconomic stability. Atinigi-Ego added that the central bank is committed to restoring inflation to the 5% target over the next two to three years, “come rain or sunshine.” With inflation accelerating at the fastest pace since December 2015 in July and remaining above the BoU’s medium-term target for the third straight month, we could see the bank move to tighten monetary policy further at the next meeting.

Nigeria: The Central Bank of Nigeria (CBN) yesterday urged the Organised Private Sector (OPS) to bring in proceeds of foreign exchange earnings back to support the CBN to meet its FX demand. The CBN also cited the dumping of FX offshore as contributing to the challenges of FX supply in the country. A bank official was quoted as saying, “We are taking FX out of this country and dumping offshore when we are told to bring them back because if Nigerians are bringing them back home, we would not be talking about the challenges of FX. There is a challenge and we have to do the right thing.” Worsening dollar scarcity and a lack of confidence in the local currency have led to the naira weakening to successive record lows on the parallel market this year.

Zambia: Zambia could struggle to meet its growth targets for 2022 amid falling copper production and prices. Recall recent data from ZamStats showed that copper production fell 7.4% y/y in H1 2022 to 364,089 tons. Meanwhile, prices for copper are down by 20% this year to $7,718 per ton on the London Metals Exchange, well below the finance ministry and national planning’s July forecast of $9,595 for the year. The slump in first-half copper came despite the government giving mining companies tax incentives this year and broadly improving the operating environment. Output fell at both mines that First Quantum Minerals operates in Zambia, which together account for more than half of national production, as prolonged rains and pandemic restrictions curbed output in the second quarter.

While the Kenyan shilling firmed against the USD yesterday, it has been a year for the bears thus far. The shilling has lost over 5% year-to-date against the dollar and plunged to successive lows in 2022. Moreover, in July, the shilling declined for the 14th straight month. External and domestic challenges have detracted from the currency’s performance.

Externally, tightening global financial conditions and the war in Ukraine have weighed heavily on the country’s trade balance and current account. As a result, Kenya’s terms of trade have worsened. Domestically, downside pressure has emanated from rising fiscal risk, dollar shortages and election-related uncertainty. While the Central Bank of Kenya has intervened in the market with the level of foreign exchange reserves falling by almost 12% since the beginning of the year, selling pressure on the currency has persisted. 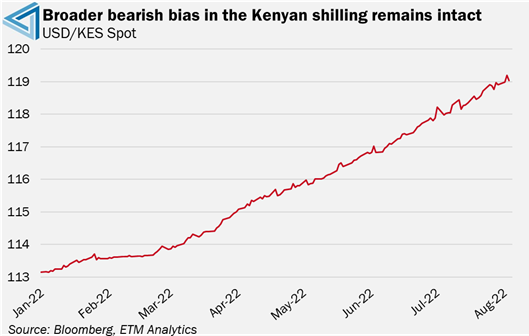 With the headwinds mentioned above likely to persist, risks to the shilling remain tilted to the downside in the near term. Furthermore, the shilling is significantly overvalued on a real effective exchange rate basis suggesting room for further depreciation exists. Further weakness could see inflation remain buoyed and external debt servicing costs continue to rise.

While Mozambique’s 2031 Eurobond yield traded lower yesterday as markets reacted to the news that oil giant Eni is looking to invest in a second production vessel offshore Mozambique to help Europe in diversifying its fuel supplies. As mentioned in yesterday’s note, the massive investments into Mozambique’s LNG industry are expected to set Mozambique on an exponential growth trajectory in the years ahead when the LNG facilities come online. 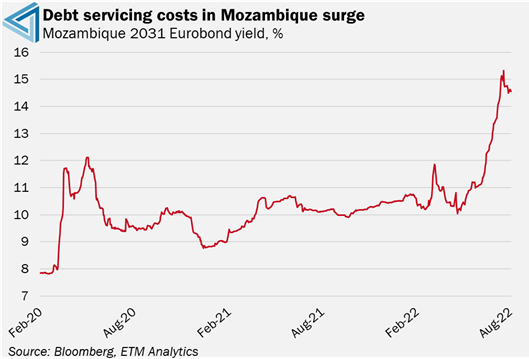 While the longer-term outlook for Mozambique is bright, risks in the near term are significant with the economy facing a number of headwinds, including tighter financial conditions, ongoing supply chain pressures, elevated commodity prices, natural disasters and instability in parts of the country. Add to this Mozambique's weak fiscal position, with the country still stuck in a fiscal rout after the Tuna bond scandal in 2016.

While the government has rolled out measures to steer the country toward a more sustainable fiscal path, much of its efforts have been offset by the double-edged sword of the Covid-19 pandemic and, more recently, the hawkish shift from central banks. The aggressive hiking by major central banks has resulted in significantly higher debt servicing costs. While Mozambique’s 2031 Eurobond yield has edged lower in recent days, partly supported by optimism surrounding the latest LNG investment news, it remains buoyed near its highest level since the debt was restructured in 2019. The 2031  Eurobond yield closed yesterday’s session at 14.62%, which is more than 600bps higher than pre-pandemic levels

Yesterday brought with it the monthly wave of PMI data. There were no major surprises in terms of the releases. Similar to June, the Sub-Sahara Africa PMI average remained buoyed just above the 50-point neutral market. Persistently strong inflationary continued to constrain economic activity and weighed on business sentiment. Ghana and Egypt are the only two countries whose PMI readings came in higher than the previous month. 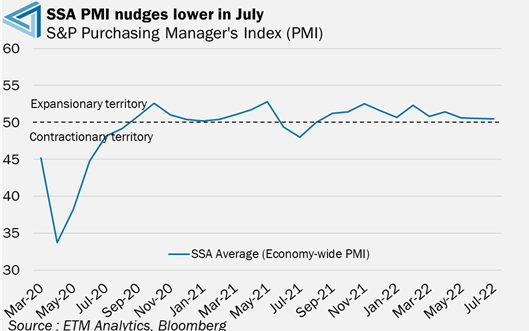 Kenya's PMI meanwhile moved deeper into contraction territory as uncertainty surrounding the upcoming election and the impact of strong inflation pressures weighed on demand. The July figure came in at 46.3 compared to 46.8 in June. In particular inflationary pressures continue to be driven by high fuel prices, along with high food prices and continued currency weakness. The one positive however has been that employment has increased. Finally, S&P noted that business confidence has remained muted, and it is only just above the May series low.

Headline PMI came in at 51.7 in July vs 52.0 in June and remained above 50 for the sixth month. Firms have been able to secure greater volumes of new business, which has resulted in a rise in activity, employment and purchasing. Sentiment is at the lowest level since March 2021, but firms have remained optimistic overall amid increasing business investments that will help improve the country's economic growth.

Egypt’s headline PMI increased from 45.2 to 46.4, however, the figure is still below 50, therefore, illustrating that businesses in the Egyptian non-oil economy saw a solid deterioration in economic performance in July. S&P said in the report that “the demand picture still appears challenging, leading businesses to give a relatively downbeat outlook for the coming year”.

Despite coming in  Ghana’s PMI indicated a sixth successive month of deterioration in business conditions as new orders and output continue to fall. However, new orders only fell marginally, which could be an indication of Ghana’s demand conditions being on the verge of recovery.