The ministry of finance confirmed yesterday, in its 2023 budget presentation and subsequent media briefings, that Ghana will seek a debt restructuring. However details are still vague and with some mixed messages. Based on reports, the key points as we understand them so far are:

However, a separate statement by the finance ministry published today noted that details are still being discussed and will be communicated in due course.

We have to say, the way this has been handled has been messy. The communication has been poor. We're even more confused than before the budget about the government's intentions.

That said, the announcement is not entirely unexpected (and in fact finally puts investors out of their misery). It confirms what investors have been anticipating for some time, given Ghana's dollar bonds have been trading at distressed prices for so long (the '32s, currently indicated at cUS$33 (mid), have been below US$50 since June, and below US$40 since September).

Moreover, we note that a 30% principal haircut is broadly in line with our own modelling. We assumed a 25% haircut in our research over a year ago.

Ghana presented its 2023 Budget on 24 November, but the key takeaway, after months of "will they, won't they", was not the fiscal projections but the minister of finance's announcement that the government will seek a debt restructuring.

That said, the budget was a bit unclear on what the authorities intended, with the speech calling for a "debt exchange programme" (the budget statement said debt treatment programme). The wording suggests to us a focus on domestic debt. It was vague on whether external debt would even be included.

However, further detail was seemingly provided by the deputy finance minister in a radio interview after the budget speech, in which he said the government is seeking a 30% haircut on both principal and interest on the foreign bonds, leaving no doubt that the dollar bonds will be included. However, media reporting is still a bit unclear as to the treatment of interest. Some reports mention a three-year grace period on interest but not a coupon haircut.

The deputy finance minister (DFM) said he hoped an agreement with investors will be reached before the end of the year – we think this is wildly optimistic.

Meanwhile, a separate statement by the finance ministry published today seemed to contradict the DFM, stating that details are still being discussed and will be communicated in due course. Regardless, we think present restructuring terms in a radio interview is a funny way of going about it.

According to the DFM, domestic bondholders (excluding T-bills) meanwhile will receive zero interest in 2023, 5% interest in the second year, and 10% in year three, with full interest only being received in 2026. There is no principal reduction. It is not clear, in our view, how this will be implemented, but it suggests a sizeable NPV reduction. What will matter, however, for foreign bondholders is fair comparability of treatment between the two.

Still, the recognition that domestic debt will be included in a restructuring is an important step (and admission), and will be welcomed by foreign investors (subject to the terms). As we have said before, it is more the debt interest bill (c7% of GDP) than the debt stock that hurts Ghana and three quarters of interest is domestic. Any restructuring that failed to tackle the domestic debt burden would be amiss.

In any case, despite recurring questions in the market over whether domestic debt will be included in a restructuring or not, it may be unavoidable now. The budget statement noted that the proportion of domestic debt maturing in one year increased from 30.5% to 45.8% in 2022, and that a large share will be maturing in 2023, while the weighted average interest rate on domestic debt increased from 17.9% at the end-December 2021 to 20.1% at end-September 2022. By comparison, the weighted average interest rate on external debt increased from 5.2% in 2021 to 6.2% at end-September 2022.

A budget over-run is expected this year. So far, for the first three quarters of the year, the overall deficit (cash basis) is 7.4% of GDP against a 6.2% target, with a corresponding primary deficit of 2% of GDP against a target of a 1% deficit. This is due to the usual revenue shortfalls (3% below target) while spending is seen as on-track (5% above target). As a result, the government has revised its 2022 deficit target and now projects a deficit of 7.3% this year on a cash compared to 6.6% in its mid-year budget review.

For next year, the primary balance (commitment basis) is projected at a surplus of 0.7% of GDP compared to a deficit of 2.7% this year. The government describes the size of the fiscal adjustment between 2022 and 2023 as representing a fiscal effort of 3.4ppts of GDP.

The budget estimate compares to the central bank's figure of 68%, as of July, while the IMF projected public debt at 91% this year in the WEO and the World Bank estimated it will reach 104%.

In any case, crucially, the government stated in the budget that debt is at high risk of debt distress and is unsustainable, according to its updated DSA. While the high risk classification is not news, as the last three budgets have said the same thing, the admission in the budget statement that debt is unsustainable is new (and the budget speech dropped the word "sustainable"). It is also not a surprise as the IMF's DSA in the 2021 Article IV, in July 2021, also said debt was at high risk of debt distress; and in our mind this raised the question of whether, given the deterioration since then, debt would now be classified as unsustainable.

To the extent that the MOF and IMF DSAs are aligned (and we don't know this yet), Ghana's DSA may therefore be an advance warning of the IMF's findings. And, if so, that might explain why Ghana has (had to announce) its intention to seek a restructuring now; essentially a prior action for an IMF programme, given IMF lending rules means it cannot lend into an unsustainable situation.

On that, the authorities stated that the third round of IMF negotiations is expected to commence at the end of this month and that staff-level agreement on a new programme would follow after that. That seems optimistic to us.

To keep the analysis tractable, we focus on the one bond, the 8.125% 2032. We assume no maturity extension. We assume the next coupon is paid on due date (26 April 2023), under the new terms, with no missed coupons (no PDI or capitalisation), except in the grace period scenarios, where there is no interest over 2023-2025.

Our estimated recovery values over a range of exit yields is shown in the table below. Recovery values are shown in US$ per unit of existing principal. 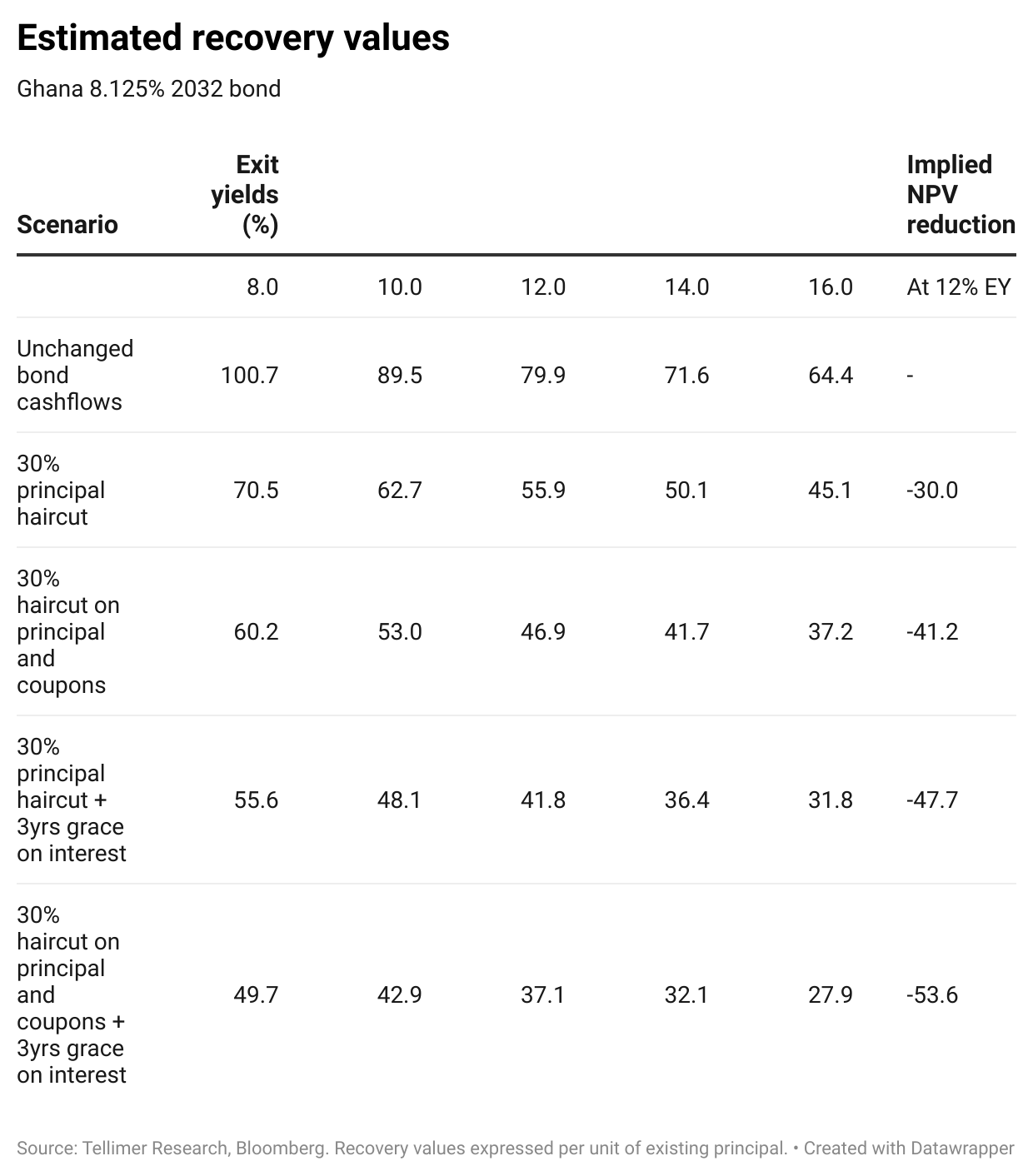 We estimate recovery values range from the low-30s to the mid-50s over plausible exit yields (12-14%). However, we think the two latter scenarios (principal haircut plus three years grace on interest and haircut on both principal and coupon with three years grace) are too severe – both imply a c50% NPV reduction, which we don't think is warranted at current debt levels for a country with "moderate" debt carrying capacity (compared to Zambia). We would expect bondholders to resist such onerous terms.

That leaves recoveries at around US$42 in the "worst case", rising to US$56 in the "best case". Given current prices (cUS$33 today), that leaves little upside (c9pts) in the worst case, especially given deal risk, and reasonable upside in the best case (over US$20pts), although we anticipate that bondholders might be able to do even better than that.

The choice of exit yield itself will be a key issue given where EM yields are now. The move to 10% in recent restructurings now seems too optimistic, but using more than 14% seems unrealistic too (tantamount to saying the restructuring won't work). The HY yield is c11% (with a spread of c700bps), on the Bloomberg EM Sovereign USD index, although market yields may decline by the time of an agreement, if consensus views on the global rate cycle are correct (with the Fed expected to end its tightening cycle in H1). For now, we prefer to stick to our 12% benchmark. 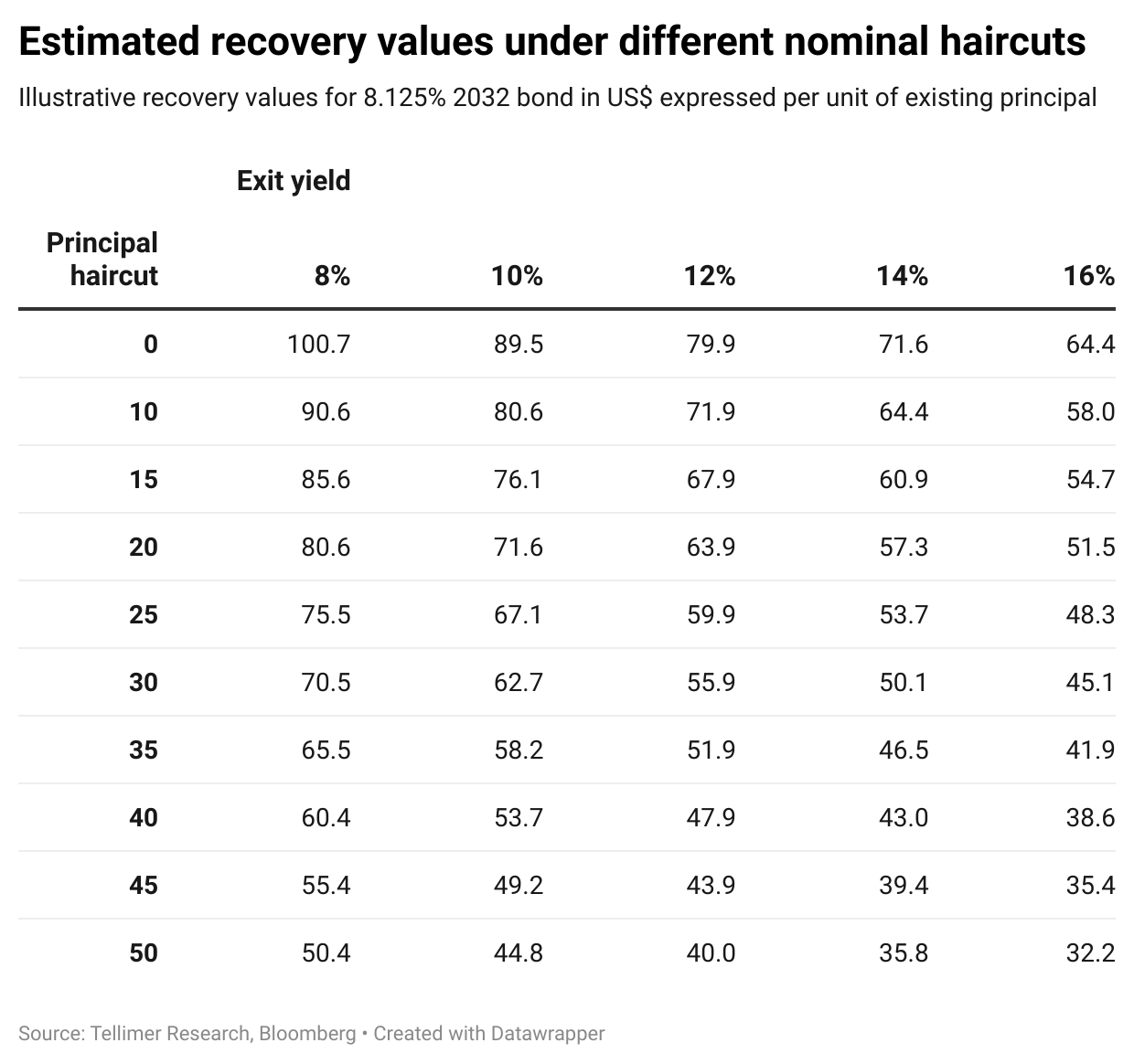 We maintain our Buy on GHANA '32s at a price of US$32.0 (yield 32%) as of cob 23 November on Bloomberg (mid-price basis); the bonds were indicated at one point higher late today (albeit trading is thin given the US holiday).

With the cat out the bag, restructuring now seems all but certain (before yesterday, we still thought it was a 50:50 call – or maybe 60% in favour of restructuring – as to whether the IMF would force PSI on the bonds). But despite the messy way in which the restructuring announcement has been handled, we think prices are below expected recovery values in plausible restructuring scenarios. Indeed, the 30% haircut outlined by the DFM is broadly in-line with our own assumption, although there is more downside risk from what he has suggested about the treatment of interest.

Moreover, if the DFM's comments are the opening salvo of a negotiation, we presume the final terms shouldn't be any worse, while we expect a robust and well-coordinated bondholder committee will be able to push back and extract better recoveries.

In addition, Ghana bonds at US$32 look better value compared to Sri Lanka (same price but much more complicated restructuring) while they are much lower than Zambia (cUS$45 on the '27s). 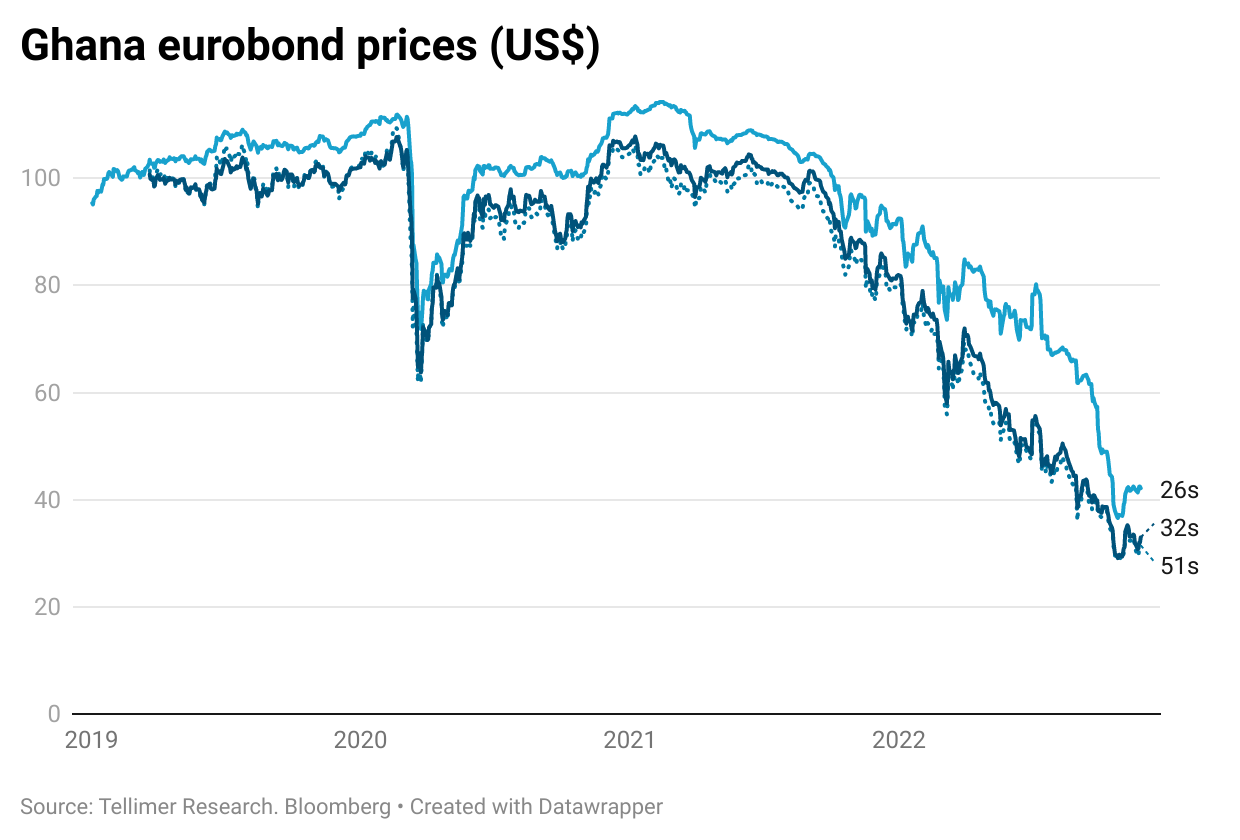