Ghana's eurobonds have collapsed this year, massively outperforming the market on the downside, and resulting in benchmark dollar yields rising to 20%, as the pre-war price trend and weak performance at the start of the year has continued amid the twin external shocks of war and rates.

Meanwhile, the Ghana cedi – down 21% vs the US dollar ytd – is also among the worst-performing currencies, too, according to the Bloomberg currency ranker. 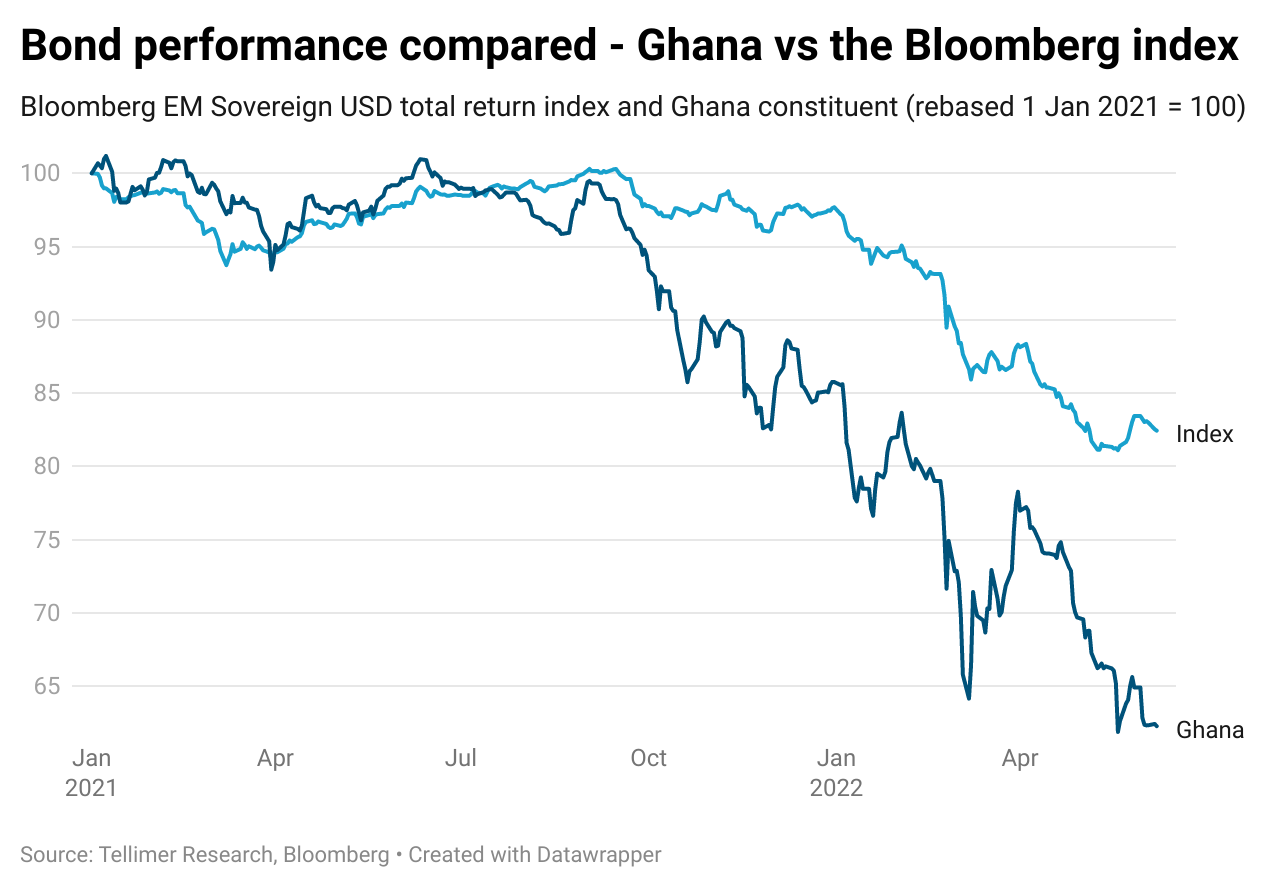 In fact, the bonds first hit post-issue lows in the immediate aftermath of Russia’s invasion of Ukraine (falling to US$58 briefly before recovering) and have been setting new loans on an almost daily basis since early May. 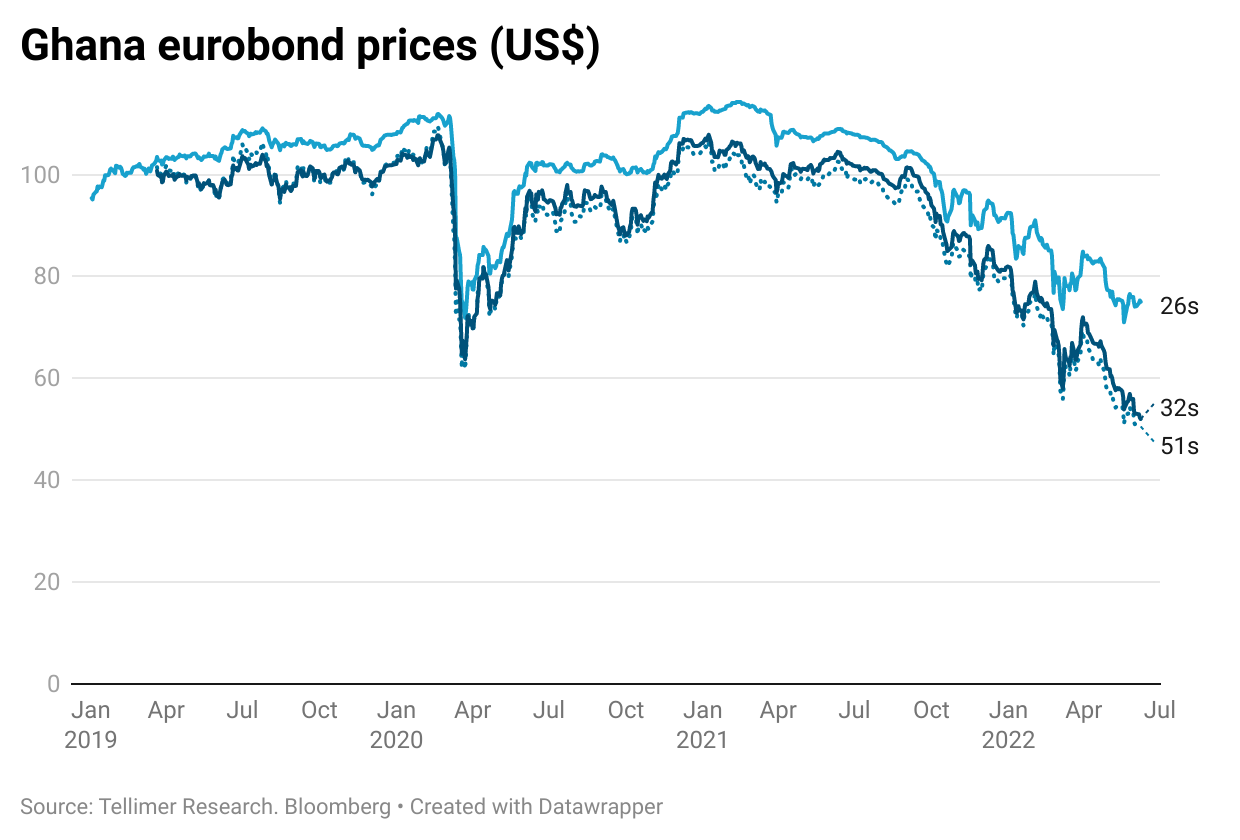 Increasing perception of default risk is also evident in the wide premium of the World Bank partially-guaranteed 10.75% 2030s over the non-guaranteed 7.625% 2029s in price terms. The premium, at c37pts, is close to its multi-year highs. 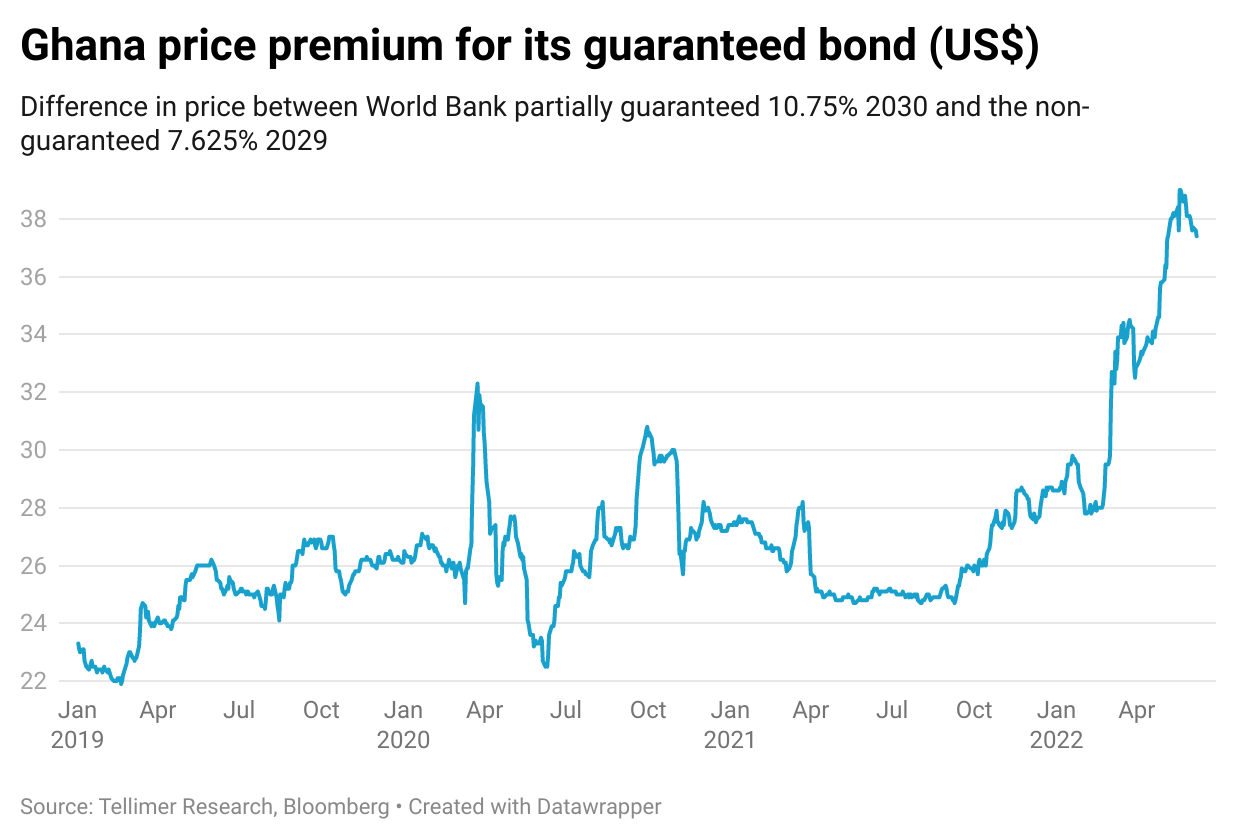 Crucially, fiscal performance has been below par so far this year, although with only one quarter gone, it is still too soon to be clear over the outturn this year. Revenues in Q1 were 13.6% below target, coming in at 3.3% of GDP (vs 3.8% target), according to Ministry of Finance figures, as the perennial revenue underperformance continues. And this is despite the still relatively strong rates of GDP growth, running at around 4.5% yoy in Q1 on the central bank's monthly activity index.

The government has however been able to keep the overall deficit broadly in line with the budget target by containing public spending. Total expenditure in Q1 was running 11.7% below budget (5.4% of GDP vs 6.1% in the budget). The government is also implementing its 20% spending cut, as per the emergency measures it announced on 24 March, although it is too soon to see the impact from this in the first quarter figures. As a result, the overall deficit was running at 2.6% of GDP in Q1 vs the target of 2.3%. The overall deficit target for 2022 is 7.4% of GDP.

We expect to see more fiscal data at the time of the central bank's next MPC meeting in July. Significantly, first quarter figures may not reveal the full impact of the deterioration in the external environment on the domestic economy and fiscal performance. 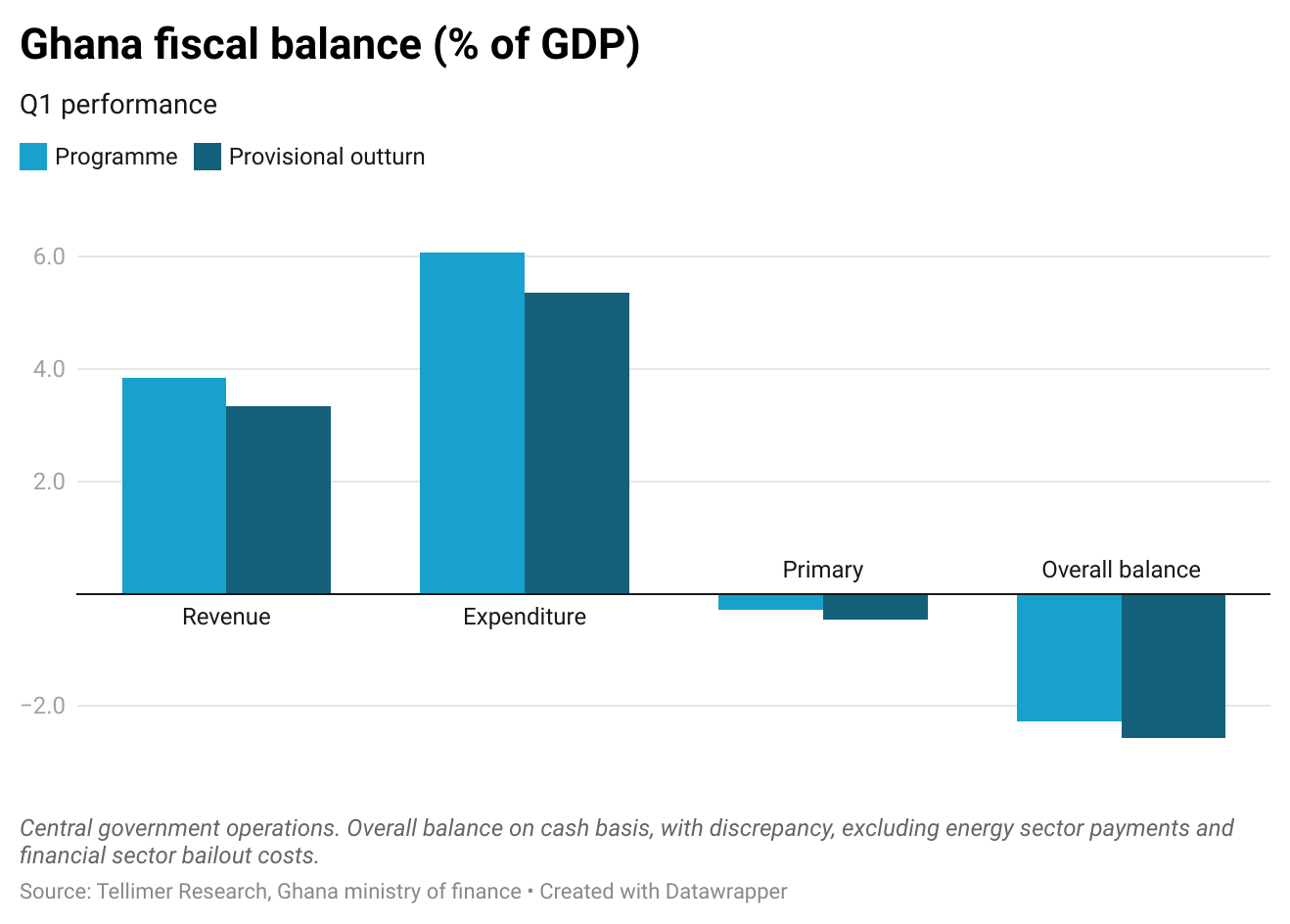 Meanwhile, public debt is hovering around 80% of GDP (78% in March, according to the central bank).

And a hoped-for improvement in the external accounts has also failed to materialised.

Ghana should be a beneficiary of higher oil and other commodity prices, although the boost to goods' exports has been offset by other capital outflows on the balance of payments, resulting in a fall in reserves. Exports have risen 17% in the first four months of the year on a cumulative basis, compared to the same period last year, according to the central bank. The improvement has been led by oil, whereas gold and cocoa are relatively unchanged. Imports, on the other hand, have been more contained, rising just 7.7% on a year earlier. As a result, the trade surplus nearly doubled to US$1.3bn, and is tracking at 1.9% of GDP, compared to 1.0% last year, according to the central bank.

However, the improvement in the trade surplus has been offset by deterioration in the net services balance and investment income outflows, so that the overall current account deficit at about -0.2% of GDP is broadly unchanged compared to last year. Moreover, the financial account has also recorded significant outflows, led by private capital outflows and portfolio capital, resulting in an overall BOP deficit in Q1 of about 1.3% of GDP (cUS$930mn) compared to 0.5% last year. As a result, gross reserves have fallen by 14% this year to US$8.3bn (3.7 months of imports) in April from US$9.7bn in December. 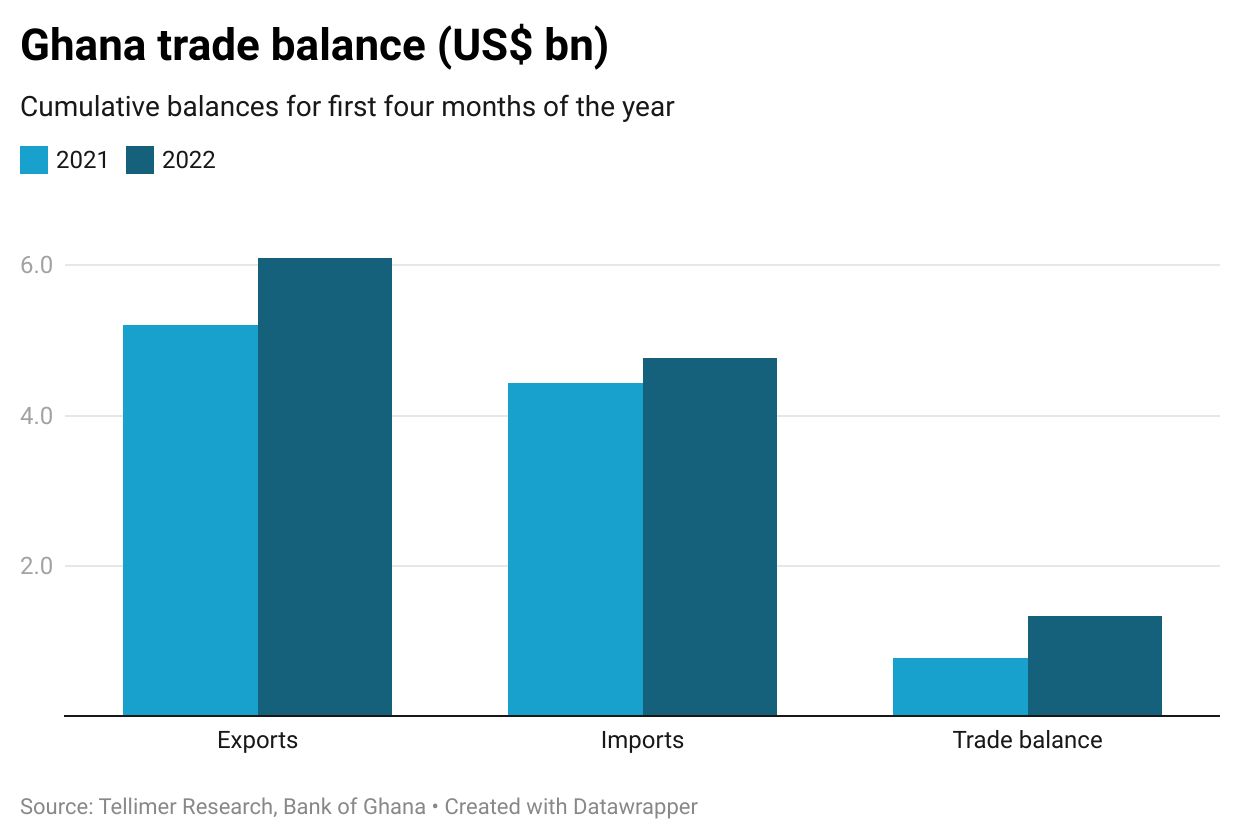 Meanwhile, Ghana's central bank does the heavy lifting amid the rise in inflation (and loss of market confidence). The central bank has raised its policy interest rate by a cumulative 550bps since September, including a 200bps increase to 19% – as expected – at its last MPC meeting on 23 May. This followed a 250bps hike in March. In addition, after the sharp currency depreciation in the first quarter, the central bank also sought to restrict currency volatility over April-May, in order to limit FX passthrough to inflation, although this will have added to pressure on reserves and the cedi was allowed to adjust lower by mid-May.

CPI inflation has risen sharply over the past year, as it has elsewhere, reaching 23.6% yoy in April (the April CPI print was available to the BOG at the time of its May MPC meeting), compared to 8.5% twelve months ago and 12.6% at the end of 2021. Thus, the annual inflation rate had nearly doubled in four months. Moreover, inflation rose to 27.6% yoy in May, according to official data released on 8 June.

Inflation may rise even further in the near term, with the central bank noting that inflation risks are tilted to the upside. This may in part reflect further pass through from recent currency weakness as well as higher food and energy prices, and higher inflation expectations. Therefore further rate hikes cannot be ruled out with real interest rates still negative and the yield on 3m domestic T-bills recently rising to 22.6%. The next MPC meeting is in July, although the central bank will also want to allow some time for recent hikes to take effect.

There is thus a danger in trying to combat higher inflation that central bank monetary tightening delivers a hard landing and Ghana falls into recession. This could further complicate the fiscal consolidation process, economically and politically, and undermine attempts to restore debt sustainability. Alternatively, the authorities may seek to steady the currency again, in order to limit fx passthrough to inflation, although this risks eroding reserves, which could also undermine investor confidence.

Hence there are no easy choices for the authorities at this stage. Indeed, absent a positive external shock (or large-scale concessional financing from a friend), it is difficult to see how Ghana is going to get out of its current predicament. The authorities need to engineer a positive confidence shock and the usual mid-term budget review next month provides another opportunity to do this, should they decide to take it.

The rise in yields has also threatened Ghana's borrowing plans, or at least caused a rethink.

The government anticipated raising at least US$750mn on the international market this year out of its target for foreign financing of US$1.5bn (1.8% of GDP) in its 2022 Budget last November (with the rest coming from domestic sources). However, with Ghana losing access to the international bond market, after yields rose above 10% last October and the government scrapping a planned bond issue, it has been forced to look to the syndicated loan market to cover its external financing needs for this year.

The government stated in March that it planned to raise US$2bn in syndicated loans to finance this year's budget, seemingly with some coming from commercial banks and some from DFIs. According to the minister of finance, as reported by Bloomberg at the end of May, the government aimed to raise US$1bn in two tranches – with the first tranche before the mid-year budget review in mid-July and the second tranche in the second half of the year.

However, it is not clear what the appetite will be, from either commercial banks or DFIs, or what terms they will require, especially with yields now at 20%. Failure to raise sufficient money will force Ghana to look at other more creative solutions, more domestic financing, printing money, or deeper fiscal cuts. The authorities steadfastly refuse to seek IMF help. Conversely, securing expensive short-term money could further damage investor confidence. 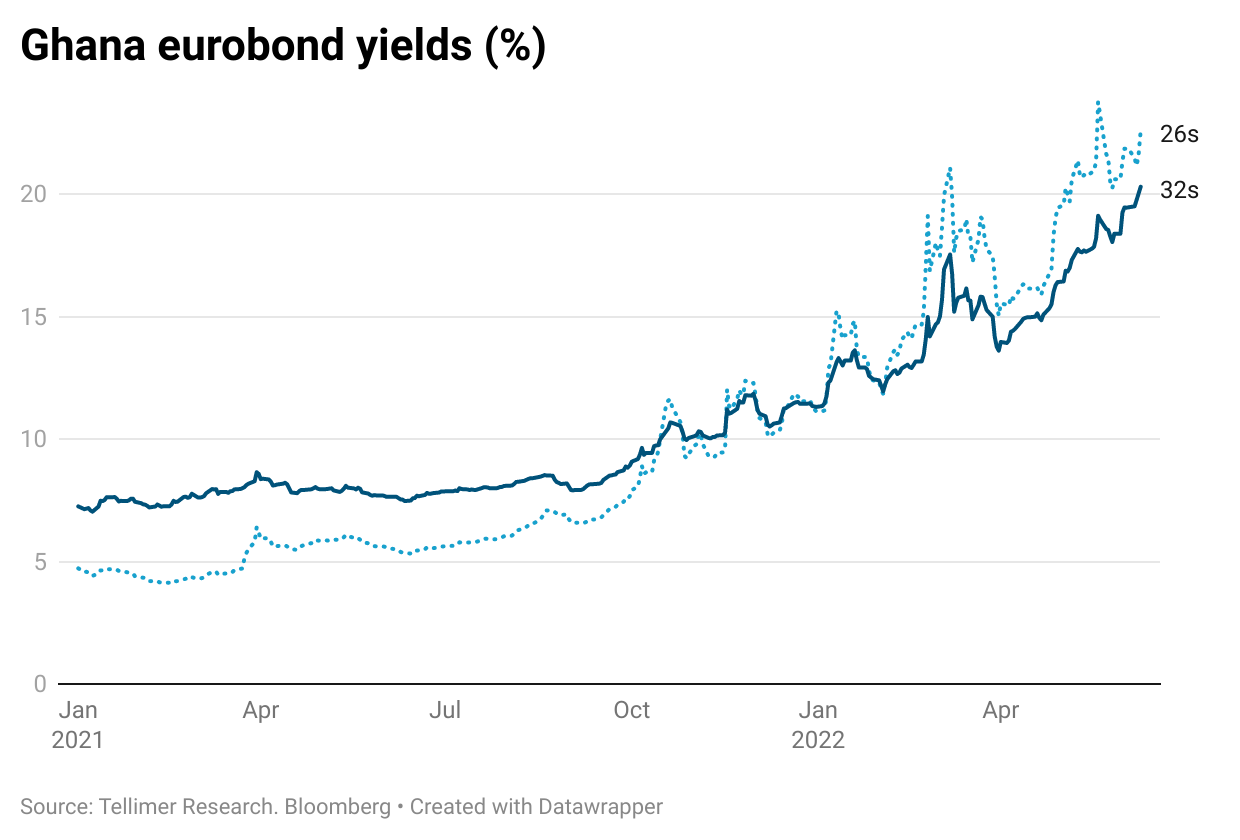 Ghana bonds have fallen to such an extent, despite a favourable commodity price backdrop, that they are now in line with even our more pessimistic estimates for recovery values, especially on the '32s.

Our illustrative recovery scenarios, from October 2021, considered a 50% coupon haircut (more aligned to the precedent set by Argentina and Ecuador in 2020), a 25% principal haircut, and a combination of the two, with no maturity extension. To keep the analysis tractable, we focus on the 2026 and 2032 bonds.

Our scenarios reflect the combination of a high debt burden (c80% of GDP), which does not shout insolvency and the need for principal haircuts, and a high interest bill (7.5% of GDP), the bulk of which is paid on domestic debt, implying most of the burden in terms of relieving cash flow should fall on domestic creditors. However, we doubt the foreign bonds will be able to escape so easily, given the sizeable bonded debt stock and debt sustainability concerns. The IMF says public debt is sustainable although at high risk of debt distress (as per DSA in the Article IV from July 2021) 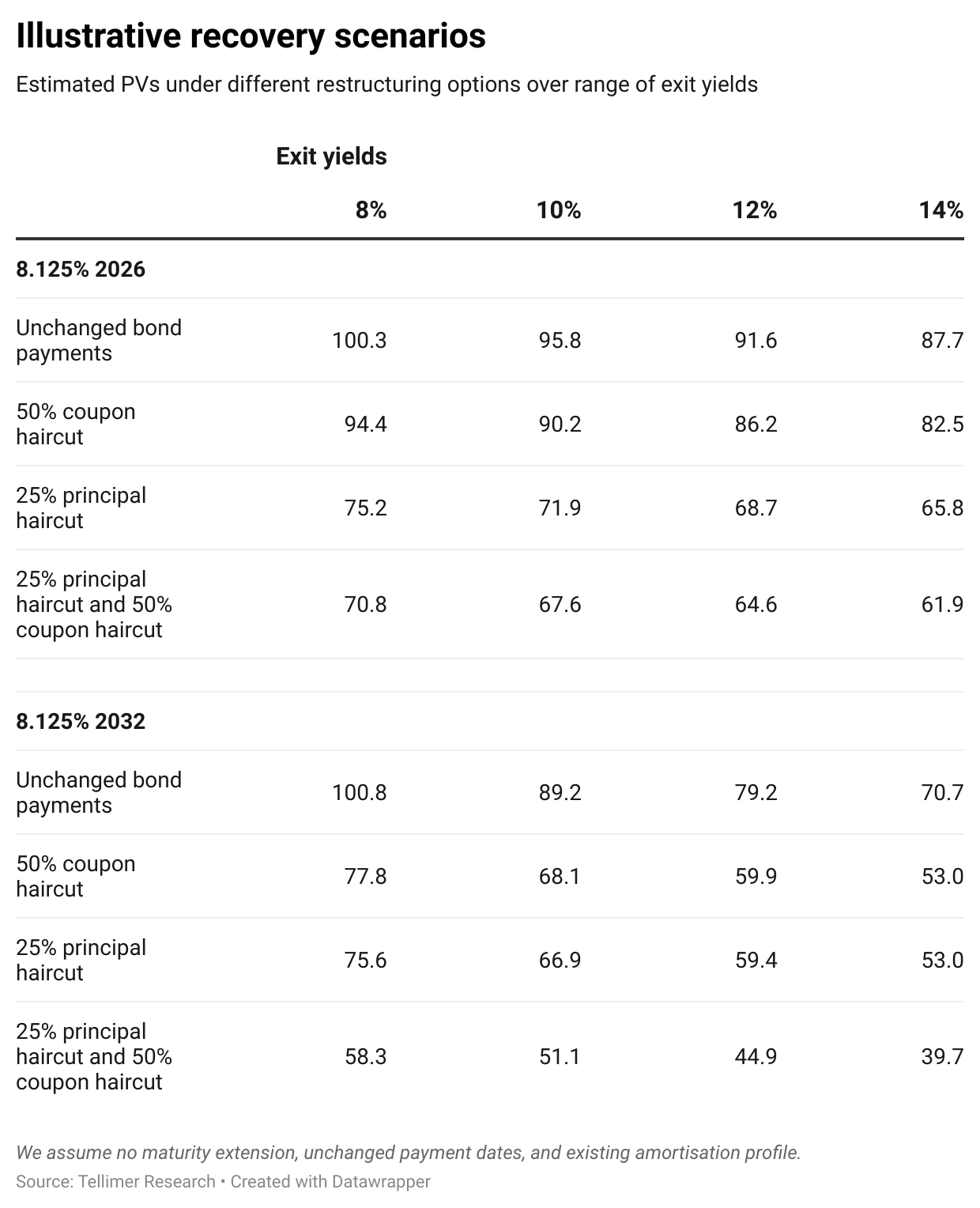 Assuming a 10% exit yield, our recovery values (updated for the passage of time) range from US$67-68 in the first two scenarios, falling to US$51 in the combined scenario of 25% principal haircut and 50% coupon haircut, for the '32s. 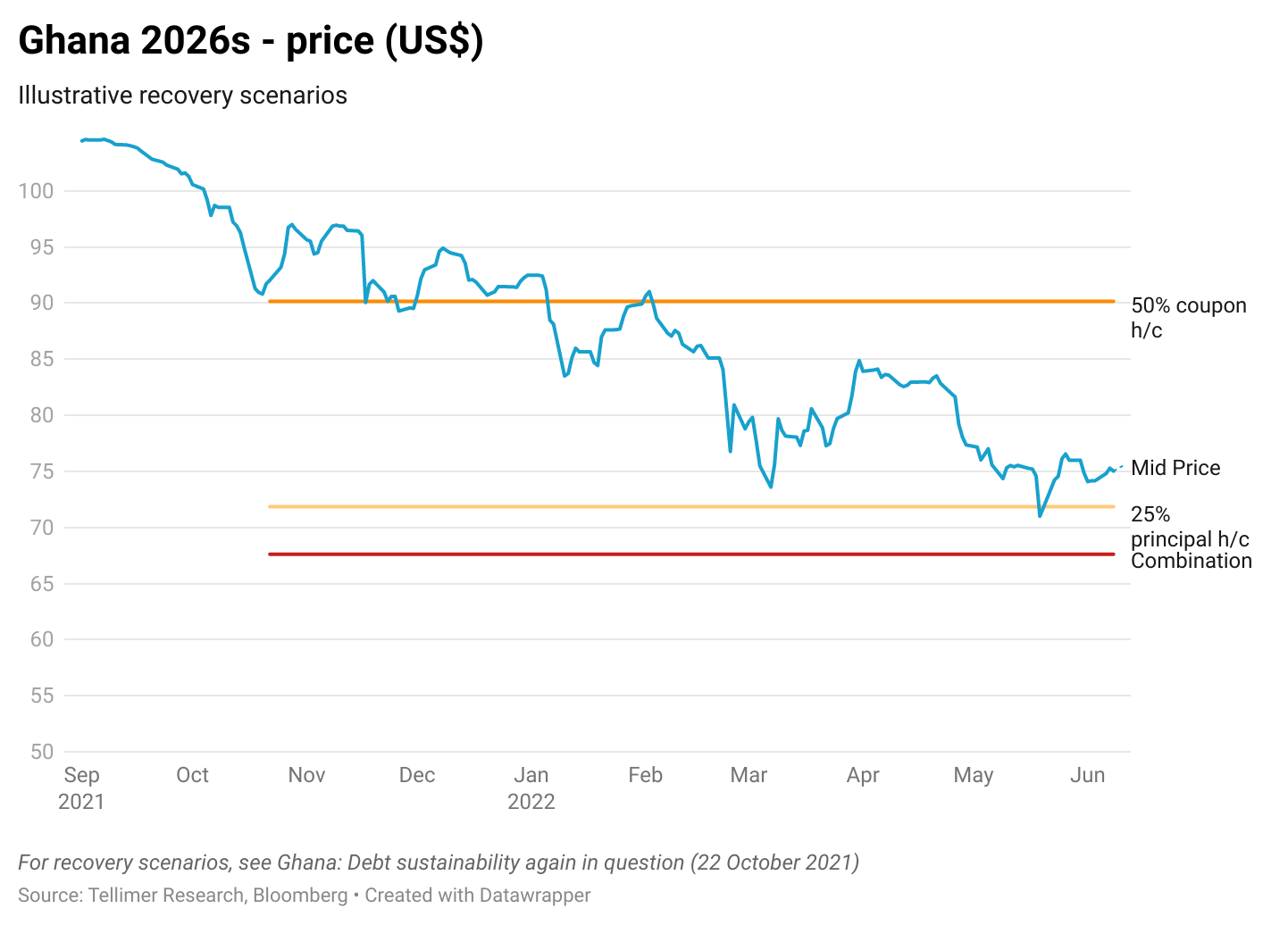 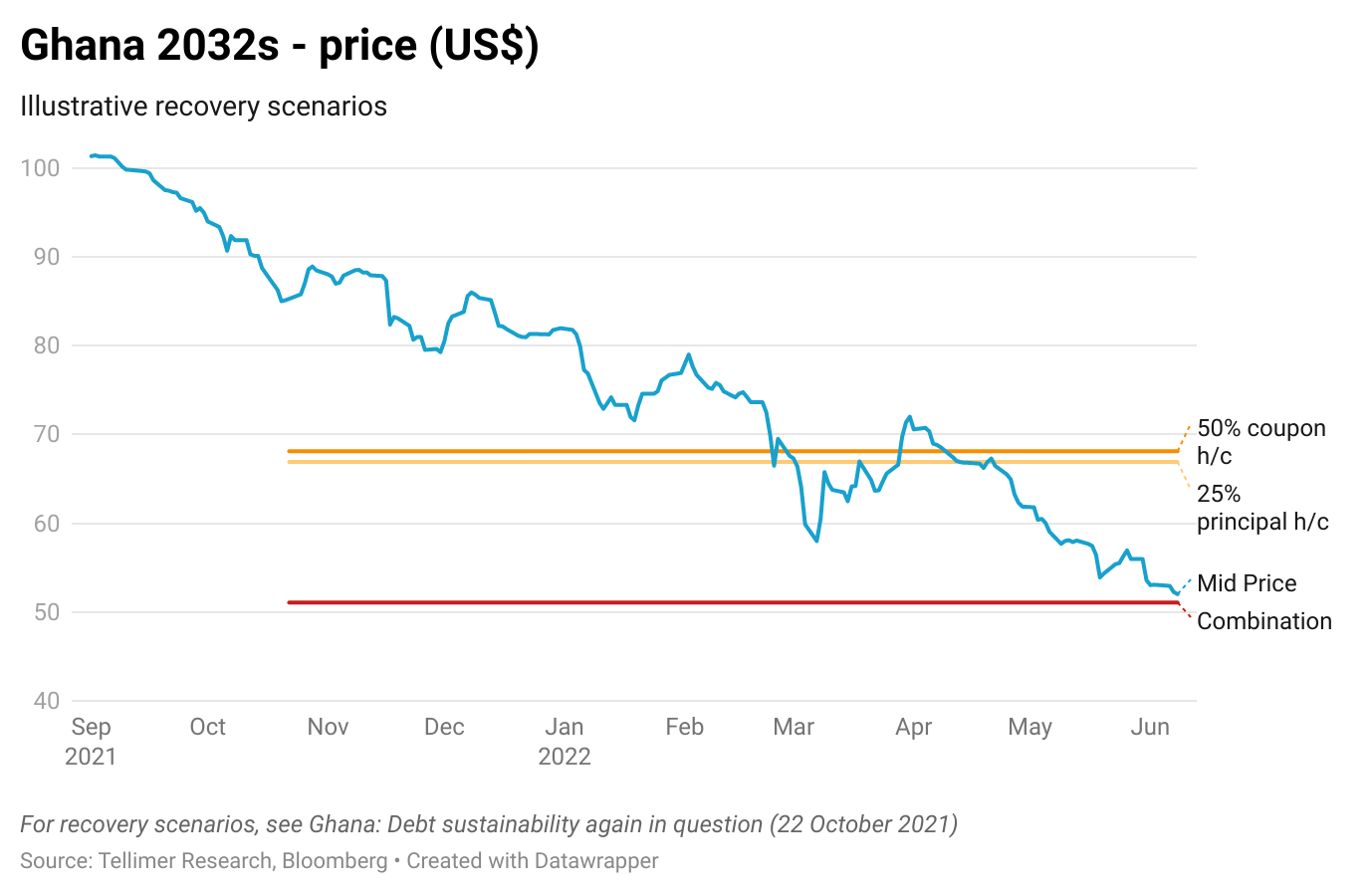 As a result, we think prevailing prices being in line with the lower end of our recovery value range (for the '32s) might make for a good tactical buying opportunity as immediate default risks are still well contained, due to the favourable amortisation profile on bonded debt and still comfortable level of reserves. There is still downside of course, but at 50, the downside is more limited. However, subject to external conditions, upside is also somewhat limited due to lack of fiscal credibility.

We target upside of US$70-75, closer to expected recoveries in our more modest restructuring scenarios, implying yields of around 13-14%, although this will likely require a positive confidence shock. As such, the bonds could well range trade (US$50-70) for now.

Possible value may also be observed from looking at other situations. Ghana '32s trading in the low US$50s are even lower than – or on a par with – some other countries either in default or closer to it. We highlight four examples:

We therefore upgrade GHANA '32s to Buy from Hold, at a price of US$51.6 (yield 20%) as of cob 8 June on Bloomberg (mid price basis). That said, investors may prefer to wait and see what happens with the syndicated loan, whether it goes ahead, and if so on what terms, or, if it doesn't happen, what that means for financing. Investors may also prefer to wait for the mid-year budget review next month and if that signals any greater attempt at restoring fiscal credibility. If not, bonds could test new lows.