First in, first out: EMs will lead DMs out of the rate hiking cycle in 2023

As the world’s largest central banks continue playing catch-up with runaway inflation, it is easy to forget that some of their emerging market peers have been much more proactive and are now starting to ease their feet off their monetary brake pedals.

In this Global Theme, we review 81 economies (including 67 emerging and frontier markets) and build a simple four-factor scorecard to pinpoint where the tightening cycle may be closest to ending.

Five economies – Angola, Armenia, Brazil, Mexico and Paraguay – meet all four of our applied criteria, with a further 14 economies clearing three of these hurdles. All are frontier or emerging markets. These markets may find that they are able to negotiate the coming global macro downturn better than their peers, with positive consequences for consumption, investment and local asset performance. A key risk to this thesis is the possibility of currency weakness once the local monetary tightening cycle ends.

In building our scorecard, we consider the following:

Our full dataset and country ranking is presented in the Appendix, but we highlight below how the sampled countries shape up against these criteria. Only five countries have cleared all four hurdles: Angola, Armenia, Brazil, Mexico and Paraguay. 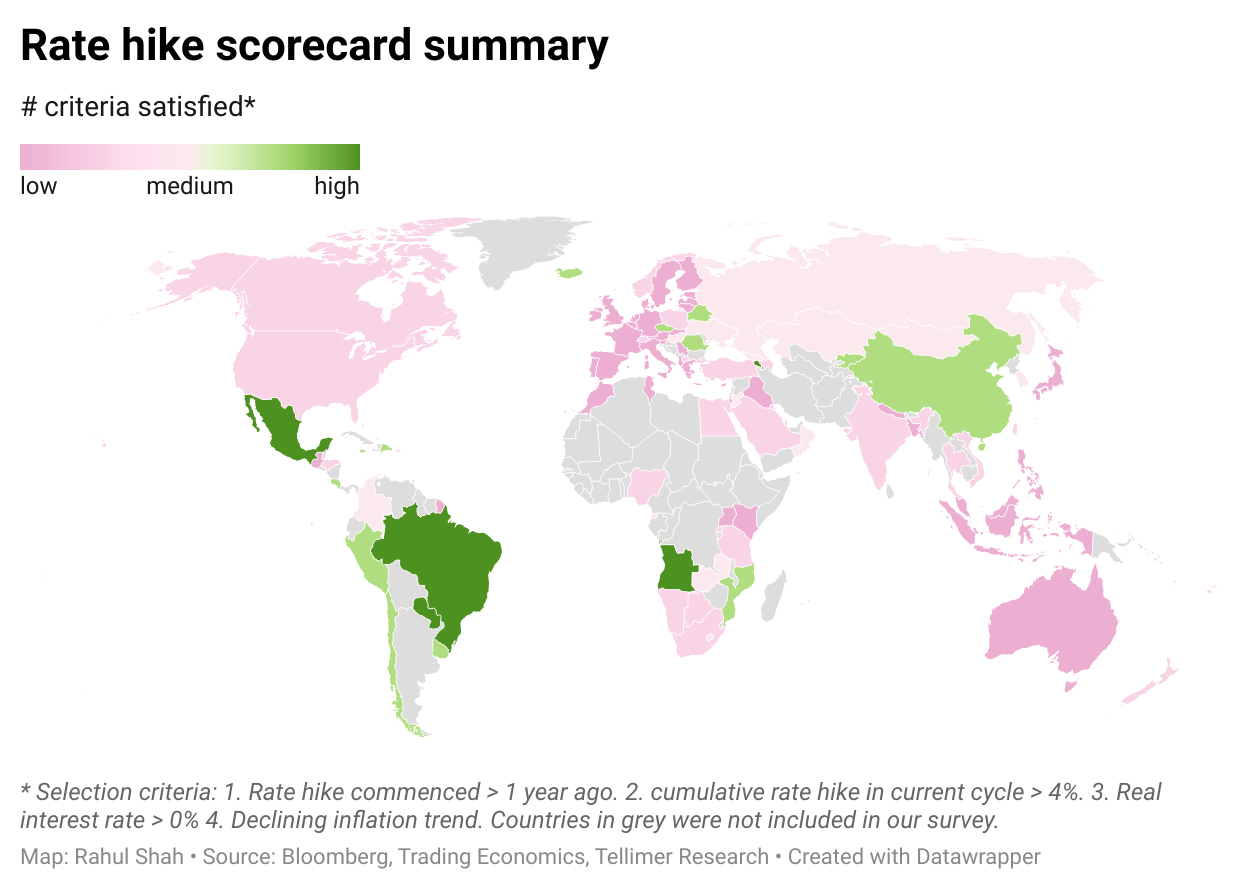 Latin America looks to have travelled furthest to tame inflation

We highlight below the example of Brazil, which tops our scorecard. Despite being one of the first central banks to begin lifting rates in the current cycle, interest rates clearly lagged the uptick in inflation. This is in stark contrast to previous inflationary episodes, when the central bank executed much more timely tightening. Nevertheless, with inflation now falling rapidly, policymakers seem to have scope to pause or even reverse the tightening cycle. 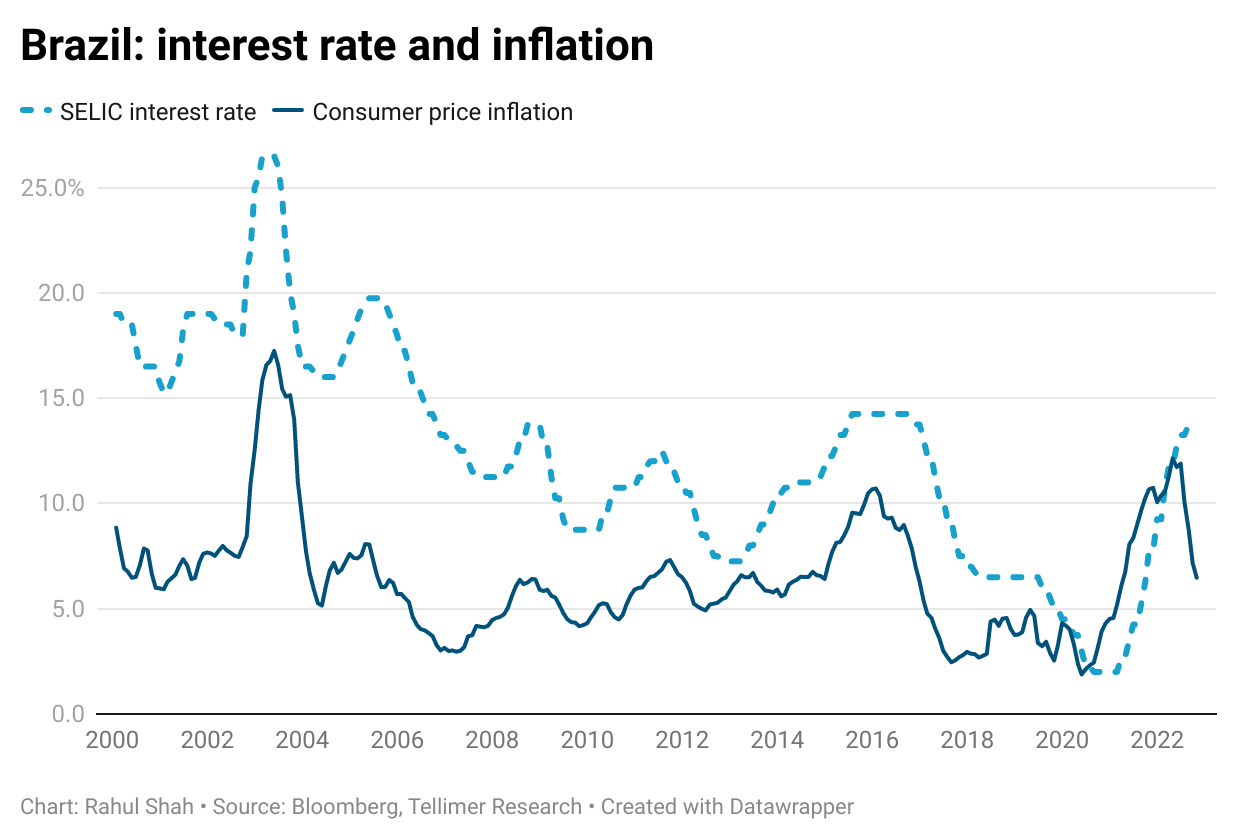 Some Sub-Saharan Africa economies (such as Mozambique and Zambia) were also quick to move into the tightening phase of the interest rate cycle. In contrast, other central banks (notably Japan) have not yet commenced hiking rates. And in selected other markets (China, but also Russia and Angola) rates are already on a downward trajectory.

Of course, there are other metrics not included in our scorecard that are also relevant. For example, economic growth, unemployment, debt levels and debt structure. Some of these fundamental factors are incorporated into our debt sustainability rankings.

One of the secondary effects of the proactive tightening stance from many EM central banks has been relative resilience to the strong US dollar; advanced economy currencies feature prominently among the weakest currencies so far this year. 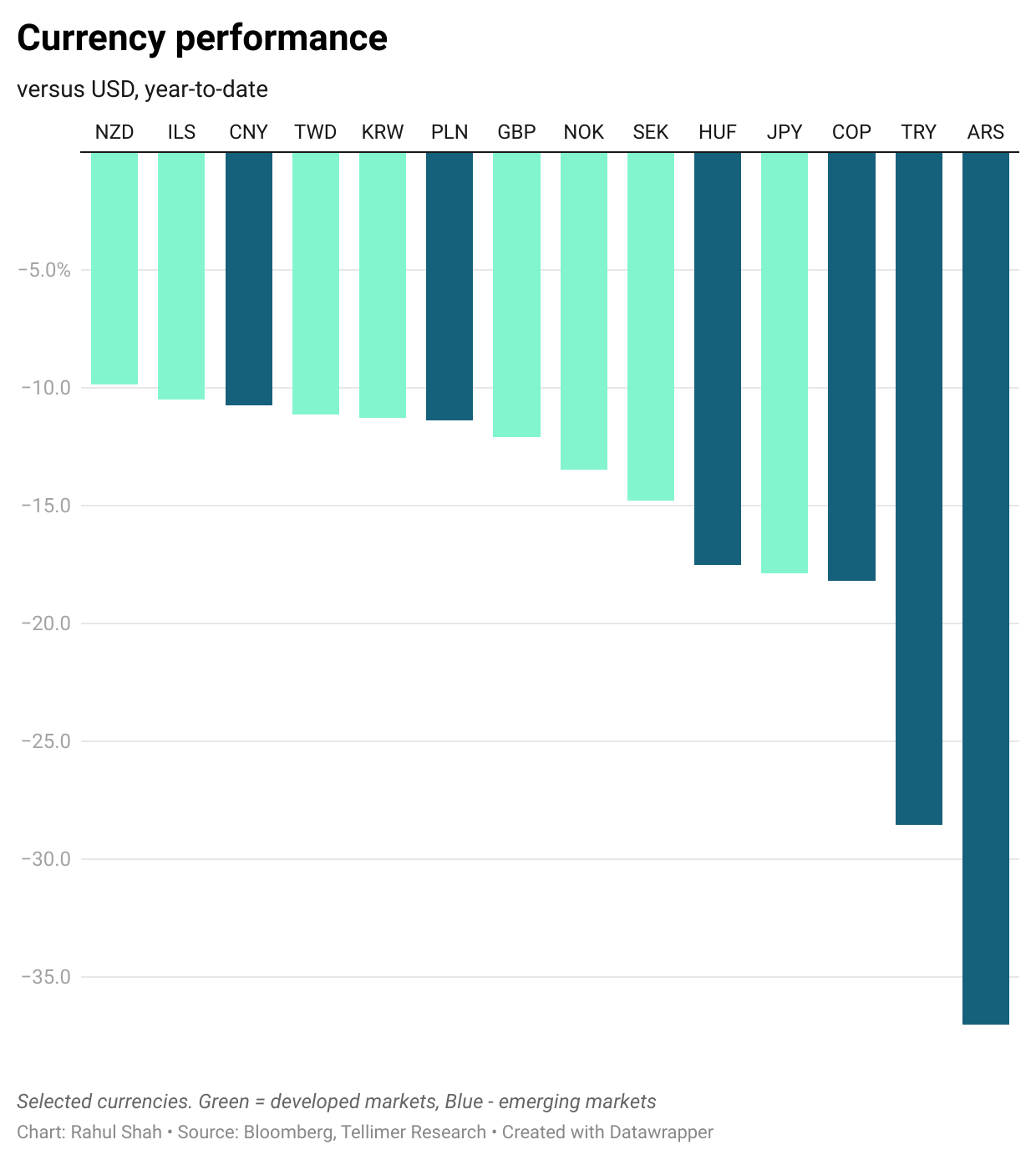