Ethiopians headed to the polls yesterday in what Prime Minister Abiy Ahmed has billed as Ethiopia's "first attempt at free and fair elections." Originally scheduled for last August, the parliamentary election (with parliament in turn electing the Prime Minister) has been delayed twice due to Covid and logistical challenges.

However, despite PM Abiy's optimistic tone, the election is taking place amid worsening ethnic conflict and famine in the country. Since the outbreak of violence last November in Tigray province, the UN estimates that over 1 million people have been displaced and more than 5 million people (90% of Tigray’s population) are facing "high levels of acute food insecurity,” including an estimated 350,000 already in the throes of famine (the worst case of famine since Somalia over a decade ago).

And sadly, this is just a drop in the bucket for Ethiopia, with ethnic violence in other parts of the country, including Amhara, Afar and Oromia, displacing another 2 million people (including an estimated 400,000 in Amhara and Afar in the past month alone, according to a UN official). If the fighting continues, those numbers will only continue to rise.

Despite a promise from the government that Eritrean troops would withdraw from Tigray amid mounting accusations of human rights abuses, they have not yet done so. Abuses have been rampant, including accusations of sexual violence and ethnic cleansing, by forces on all sides of the conflict, including government and Eritrean troops and allied militias from Amhara, and the opposition TPLF.

Against this backdrop, the prospects for free, fair and credible elections are slim. Out of Ethiopia’s 547 electoral districts, 102 will not go to the polls, including all 38 of Tigray’s districts and another 64 districts, mainly in Harari and Somali, which will not be voting until September due to logistical challenges and insecurity.

In addition, several key opposition groups are either banned from competing or have boycotted the election, claiming that poll closures are mainly in areas where opposition parties have strong support and citing the arrests of numerous government critics and senior opposition leaders, largely in Abiy’s restive home region of Oromia (home to roughly a third of Ethiopia’s 110 million people).

In aggregate, this means that turnout is likely to be low across Ethiopia's c37 million voters. Abiy's Prosperity Party is assured of victory given the boycotts by some parties and with the 42 participating opposition parties likely to fragment the protest vote. Nonetheless, the opposition could still increase its representation in parliament relative to the 2015 election, when the ruling EPRDF (the predecessor to Abiy’s Prosperity Party) took home c95% of the vote and 500 out of 547 seats amid c93% turnout.

In any case, Abiy is unlikely to come out of the elections with a strengthened mandate. The boycott of the polls, alongside persistent violence and logistical challenges, will undermine the legitimacy of the newly elected parliament. And while 46 local groups and c45,000 individuals have been accredited to observe the vote, the AU is the only major international organisation to deploy monitors after the EU pulled out last month due to security concerns, further undermining the credibility of the election.

Vote counting has now begun after a long day of voting yesterday, with many polling stations staying open beyond closing time amid higher-than-expected turnout and logistical challenges. The Ethiopian Citizens for Social Justice, an opposition party, says that it has registered more than 200 complaints of irregularities, with some locations running short of ballots and others chasing away opposition observers, but overall the process seems to have gone as well as could have been expected given the prevailing conditions of the vote.

While there have not been any reports of major violence yet, and Abiy’s office says that “Extensive work has been done to mobilise the security sector,” the election results could serve as a further flashpoint for violence when they are announced (which is expected within the next 10 days or so). And with the election seen by many in the country as illegitimate, it will only serve as further fuel to opposing parties in Tigray, Oromia and beyond to persist in their violent struggles against the government.

Looking beyond the election, it seems that Ethiopia paid its US$33mn eurobond coupon on 11 June as scheduled (we have not received confirmation one way or the other, but expect that we’d have heard by now if it wasn’t paid). As the first major sign of Ethiopia’s restructuring intentions, this signals that Ethiopia plans to take a constructive approach with creditors and will leave the door open for the eurobond to be excluded from its restructuring under the Common Framework.

That said, the Paris Club and IMF have remained clear in their insistence on private sector involvement as a requirement of the Common Framework in recent statements on Chad’s restructuring, with the Paris Club saying that the "authorities are expected to seek from all private creditors and other official bilateral creditors debt treatments on terms at least as favourable as those being considered by the creditor committee, in line with the comparability of treatment principle" and IMF Managing Director Kristalina Georgieva responding with a statement that she "strongly endorse[s] the call by the [Chadian] Creditor Committee for private creditors commit to negotiate such debt treatments without delay."

That said, clearly Ethiopia and Chad come from very different backgrounds. Chad does not have a eurobond, and most of its private external debt is backed by oil. And, with Ethiopia’s recently announced budget projecting a deficit of 2.7% of GDP in 2021/22 (down from 3.3% of GDP in 2020, per IMF WEO estimates), and public debt projected to rise to just 56% of GDP in 2021 (again, per WEO estimates), creditors will be able to make a strong argument that PSI is not a required condition for debt sustainability.

If Ethiopia succeeds in holding the election without any major uptick in violence, then it can shift its focus to beginning to repair the country’s bitter ethnic divisions. In addition, if its coupon was paid on time, as we believe it was, it shows that there remains a possibility of a positive outcome for bondholders at the end of the restructuring process. However, both roads are likely to be long and covered in potholes that could send Ethiopia down a much darker path if not deftly navigated.

Aside from the steep humanitarian costs of Ethiopia's ongoing political crisis, the economic impact of the conflict has also been clear. Once hailed for its vast economic potential and ambitious reforms, the mood on Ethiopia has largely soured and it will be difficult to rebuild its attractiveness as an investment destination. The Ethiopian Investment Commission showed that FDI inflows have dropped from a high of US$4.17bn in 2017 to just US$2.41bn in 2020, while lacklustre interest in Ethiopia's recent telecom license auction shows the extent to which the conflict has dulled its shine.

Meanwhile, US and EU sanctions have put much needed donor and IMF funding at risk, which could be a crushing blow to Ethiopia’s fragile balance of payments. Alongside a potential rise in violence and insecurity post-election, sanctions could threaten the government's plans to sell off a 40% stake in state-owned Ethio Telecom, with potential investors having until 15 July to express their interest. 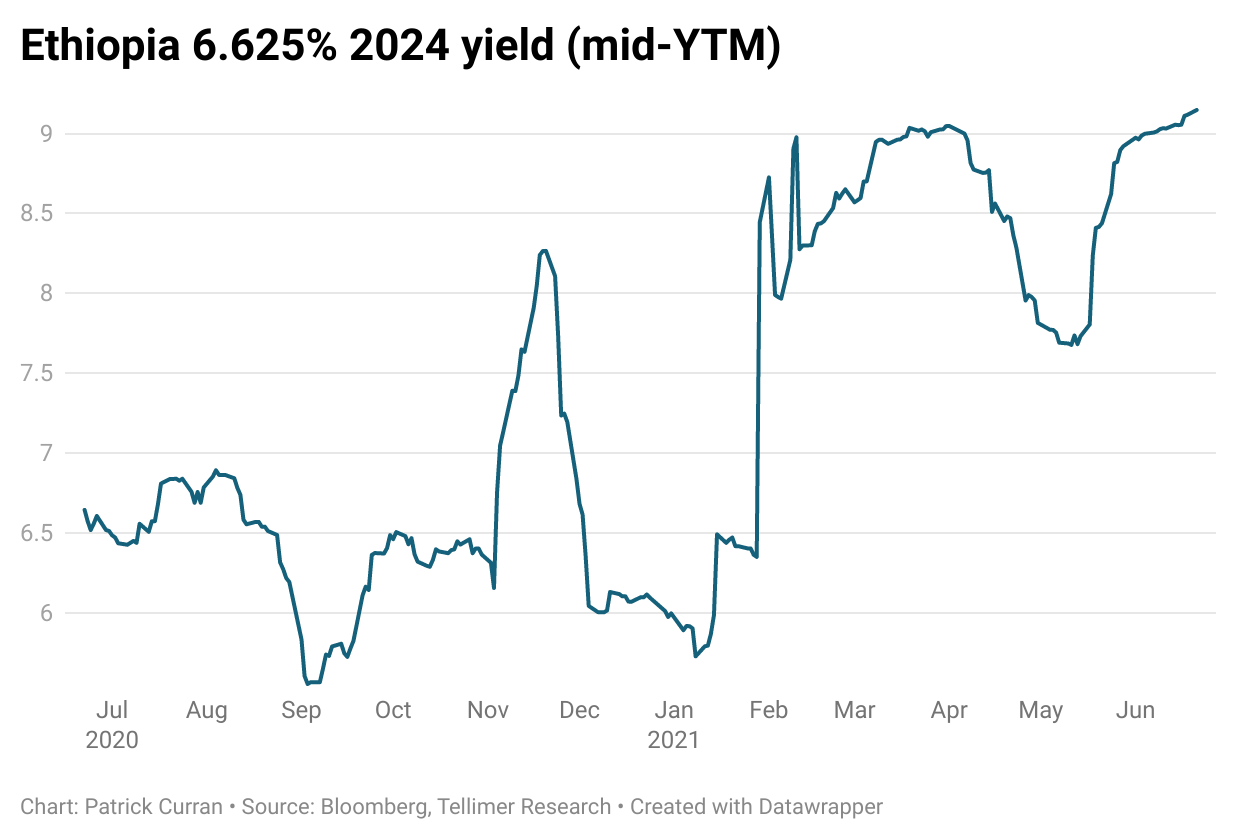 Safaricom in Ethiopia: Not as lucrative as the market believes, May 2021

Ethiopia: Conflicting reports on the state of the conflict, December 2020

Ethiopia on the brink of civil war, November 2020

Conversation with the National Bank of Ethiopia, October 2020