Sovereign bond issuance in emerging markets had another relatively slow month in March as the sell-off and volatility in US bonds continued, and fears of a repeat of the Taper Tantrum resurfaced. It follows the strongest start to the year since the GFC after a record-breaking January.

EM hard currency sovereign bond issuance was US$14.5bn in March, based on our calculations using data from Bond Radar. Whilst this marked a 41% rise on February, it was still 61% down on January.

Year-to-date, issuance amounted to US$62.1bn in Q1, 59% higher than the same period last year (although activity in the first quarter of last year was hit by the pandemic). It was 23% higher than Q4, which might be a better comparison. Investment Grade (IG) issuance was 12% higher than in Q4 while High Yield (HY) was 61% higher. 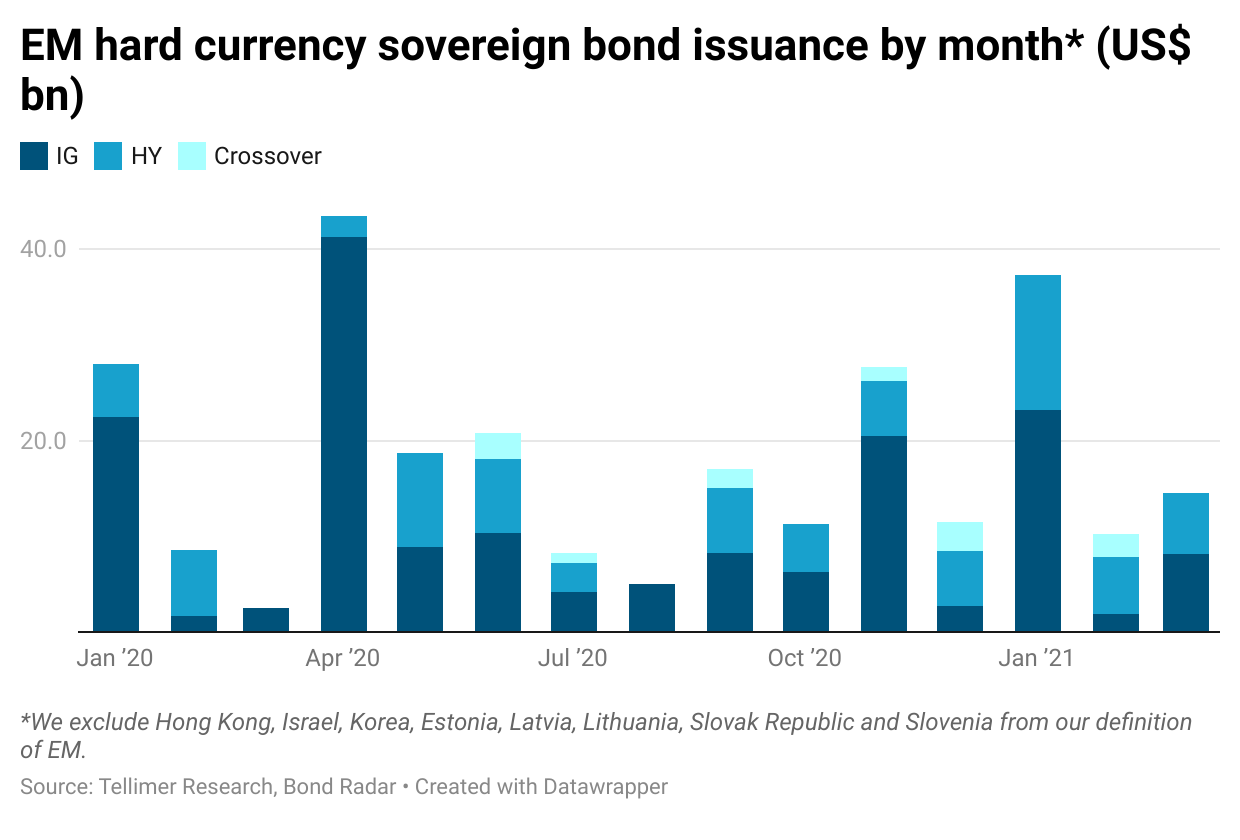 Most issuance so far this year has been issued by IG names, although IG issuance has slowed down. Over the quarter as a whole, more than half (53%) of total EM issuance was in Investment Grade in Q1. But that still means over 40% (43% to be exact) has been issued by High Yield, including Single B names, which shows that the market remains open for most borrowers. Crossover accounts for the remaining 4%. Indeed, HY issuance accounted for half of all EM sovereign issuance in February-March, as overall activity slowed after a bumper January.

There were four High Yield issuers in March. After a slow start to the month, HY was saved by a rush of last minute activity in the final few days of the quarter, with three issuers (Ghana, Pakistan and Maldives). The other HY issuer was North Macedonia at the beginning of the month. HY issuance amounted to US$6.4bn in March, slightly up on February's US$6.0bn, although 86% of this came in two deals – Ghana and Pakistan.

Ghana issued US$3.025bn in a four tranche deal, with a US$1bn 8-year at 7.75%, a US$1bn 13-year at 8.75%, and a US$500mn 21-year at 9.25%, although it was the novel US$525mn four year zero coupon bond, sold at an implied discount of 6.309% (price 78 cents), that drew most attention. It was the first such offering in frontiers we are aware of. Total combined orders were over US$6.2bn. The sale also included a tender offer for the 23s. With the operation, Ghana will have successfully managed down maturities over the next four years, avoiding the wall of maturities that will hit many other frontier issuers over 2022-2024.

Pakistan issued US$2.5bn in a three tranche deal, a US$1bn five year bond at 6%, a US$1bn ten year bond at 7.375% and a US$500mn thirty year at 8.875%. Total orders were over US$5.3bn. The sale was well-timed, capitalising on positive investor sentiment following completion of the IMF's combined second through fifth reviews of its EFF on 24 March.

Maldives also issued a US$200mn five year Sukuk at 10.5% in the final days of the month, less than expected and at a very high rate, as it looked to refinance its US$250mn 2022 maturity through a tender offer. Double digit yields smack of desperation, if not distress; we think it is the highest yield at issue since The Bahamas priced at 9.25% in October last year, and the highest since Mongolia's 10.875% 2021s in 2016.

With this, it brings the number of HY issuers this year so far to 14, of which, six are single B names (Benin, Bahrain, Egypt, Maldives, Ghana and Pakistan).

The irony, however, is that HY issuance has continued at the time that IG issuance has slowed down, given the rise in US yields. US 10-year yields rose by 34bps on the month, closing at 1.74% on 31 March, and have risen by 83bps YTD. While EM spreads have remained well-contained, being largely unchanged this year, nominal EM yields have increased as a result (now standing at about 5% on average, based on the EMBI spread plus 10yr US yield). Frontier yields meanwhile have risen to 7.6% on our measure, up 91bps this year, while the frontier-IG spread has widened 16bps YTD to 502bps. HY issuers, with large financing needs and upcoming maturities, may feel they have little choice but to pay the higher rates, while IG can be a bit more choosy. 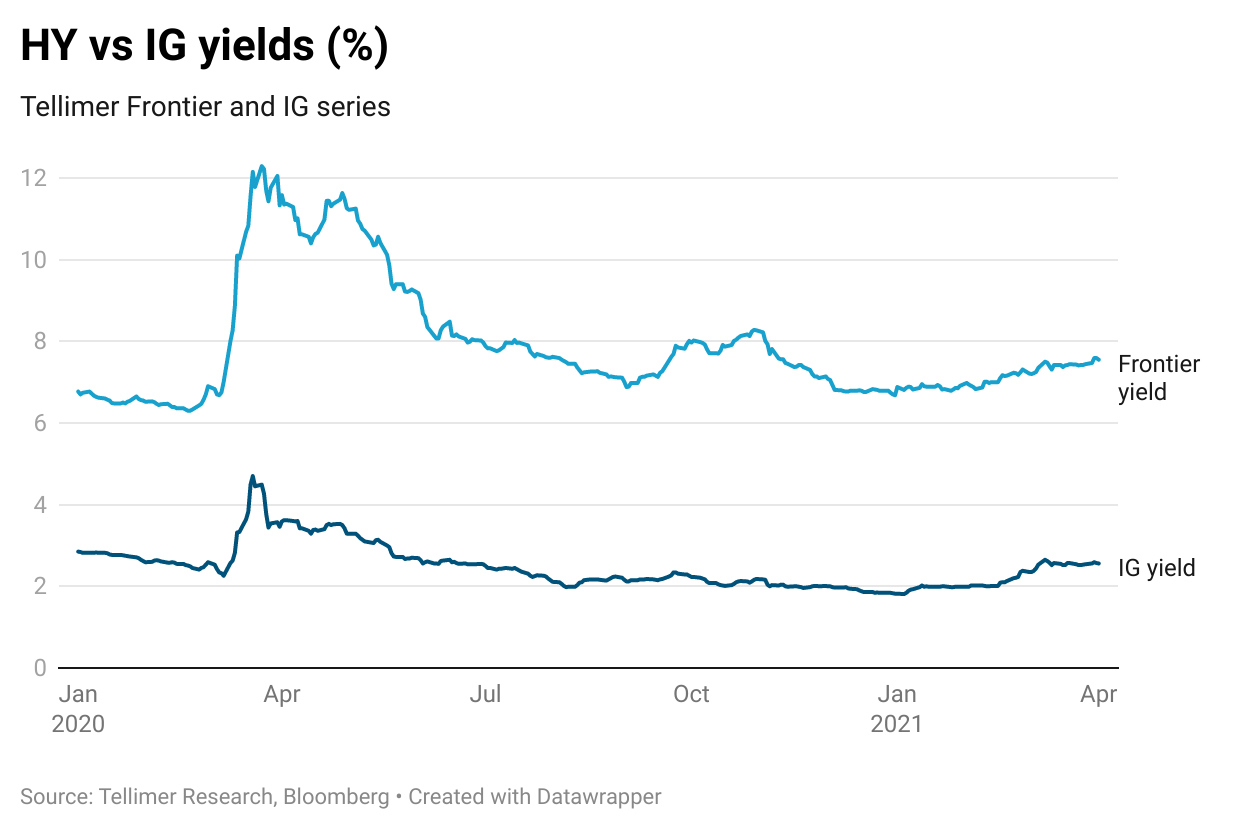 This also shows that the market is open for countries that are eligible for the G20's Debt Service Suspension Initiative (DSSI), including those that have participated. Five DSSI eligible countries have already come to the market this year, namely Benin, Ghana, Maldives and Pakistan, and the Cote d'Ivoire tap, with three of them taking place just this week. Of the four new issuers this year (ie excluding Cote d'Ivoire which came to the market at the end of last year), two have participated in DSSI (Maldives, Pakistan) while two have not (Benin, Ghana).

This compares to four DSSI eligible countries issuing last year (including Cote d’Ivoire), in the eight months after the market reopened last Spring; although the majority of those last year, while DSSI eligible, haven't participated in it (Honduras, Mongolia, Uzbekistan). Cote d’Ivoire became the first country that had participated in DSSI to issue when it did so in November, although one can hardly say it has opened the floodgates.

The market expects DSSI to be extended again at next week’s IMF/World Bank Spring Meetings, likely through to the end of the year. However, while frontier fixed income investors have by now got used to DSSI, concerns over DSSI have largely been surpassed by the Common Framework.