EM Wars: The changing art and risk of war in Emerging and Frontier markets 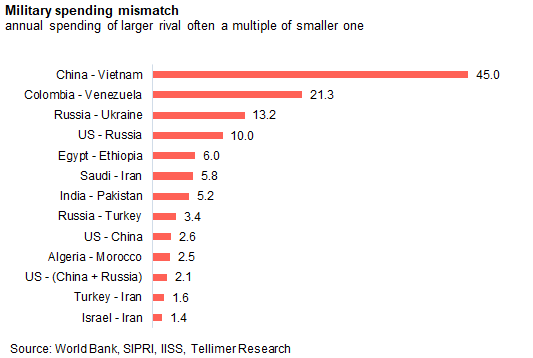 The US remains supreme military force globally on all conventional measures. In the last three years the gap between US annual military expenditure and that of China, the number two global spender, has stopped narrowing. And although US overseas military personnel has declined for decades it has increased in the last three years.

But changes in US foreign policy (more selective decisive intervention), the ambitions of smaller global powers, technology innovation, and the proliferation of non-state proxies have changed the nature of inter-state war.

The results are more competition between global and regional powers in areas where the US is choosing to reduce its commitment and faster escalation of conflict (but also a shorter path to de-escalation).

For investors in emerging and frontier markets, the implications appear mainly negative: eg higher fiscal spend on military, more disruption from conflict, more common use of trade access and financial sanctions by the US and regional powers, less use of conventional military personnel (which may incentivise them to encroach upon economic and political spheres better left to civilians).

The silver lining is that, in the long-term, very large scale inter-state wars (eg US-China, US-Russia, US-Iran, US-North Korea, Israel-Iran, India-Pakistan, Turkey-Iran, Russia-Turkey, China-Vietnam, Algeria-Morocco, Egypt-Ethiopia, Colombia-Venezuela) are less likely precisely because the changes mentioned above (less decisive intervention by the US, technology, non-state proxies, war via economic rather than military tools) also make it much more difficult (longer and costlier) for those with conventionally more powerful military forces to win a war.

The US remains by far the biggest military spender. Indeed, its spending and personnel has increased since 2017. But the selective and more limited deployment of its massive military resources, particularly the scale of personnel required for a foreign occupation, and its increasing use, instead, of financial tools (trade access, financing restrictions, sanctions, eg as seen with Iran) is opening up space for smaller powers. China, France, India, Russia, have all competed to very varying degrees of success in those areas where the willingness of the US to intervene decisively has waned.

Also countries, historically reliant on the US for defence cover, are having to take greater responsibility for the defence (whether via military, financial or diplomatic tools) of their own borders and the security of their region (eg NATO members in Europe, Qatar, Saudi, Turkey and UAE in the Middle East, as well as, over time, Vietnam and the Philippines in Asia-Pacific, Nigeria in west Africa, Morocco in north-west Africa, and Kenya in east Africa).

Technology change has always been at the core of warfare. But more recent developments (eg improvised explosive devices, drones, smaller nuclear devices, cyberwarfare, surveillance and disinformation via social media, biological weapons) has narrowed some of the gap in situations of asymmetric warfare (ie a war between two sides with very different military capability as measured by conventional metrics such as expenditure, personnel, or arms). Control of the skies, seas and land obviously still require conventional military might, but these technology changes make it much harder for that conventional military to prevail.

The availability of and willingness to use private contractors in the corporatised form of, for example, Academi (formerly known as Blackwater) from the US, or the Wagner Group from Russia, or under the guise of sectarian militia like Hezbollah, or in the form of ideological zealots like Daesh or Al Qaeda, has allowed countries to conduct military operations via proxies to a degree perhaps not seen before. Doing so obviously reduces the political costs associated with the inevitable casualties in a conflict as well as the financial costs of prosecuting conflict. Similar to technology changes, the role of proxies or mercenaries is not a new one, but perhaps just never as prevalent in conflict as they are now.

Both technology advances and the use of third-parties also allow for plausible deniability in international warfare waged by countries (eg highly sophisticated drone attacks on core Saudi Aramco assets were claimed by Houthi rebels in Yemen, and at times, in both Syria and Libya it has not been obvious who is fighting whom with what weapons and from where those weapons have been supplied and financed). Plausible deniability allows the aggressor country to reduce the chance of a direct counterattack. Equally importantly, plausible deniability also allows larger global powers (eg the US in response to the Saudi Aramco attack) to avoid counteraction when they do not see sufficient self-interest.

The implications for investors, particularly in the emerging and frontier markets, are mainly negative:

(1) Continuing increases in military spending by governments (in some cases, as a percentage of GDP, as well as in absolute terms) for the largest emerging countries (China, India, Sout Korea, Turkey);

(3) Less use for large cohorts of soldiers, which likely pushes more military personnel into quasi-civilian economic and administrative activities;

But there is one important silver lining: a more competitive military position for smaller countries facing threats from larger ones may actually reduce the likelihood of major, full-blown inter-state wars. 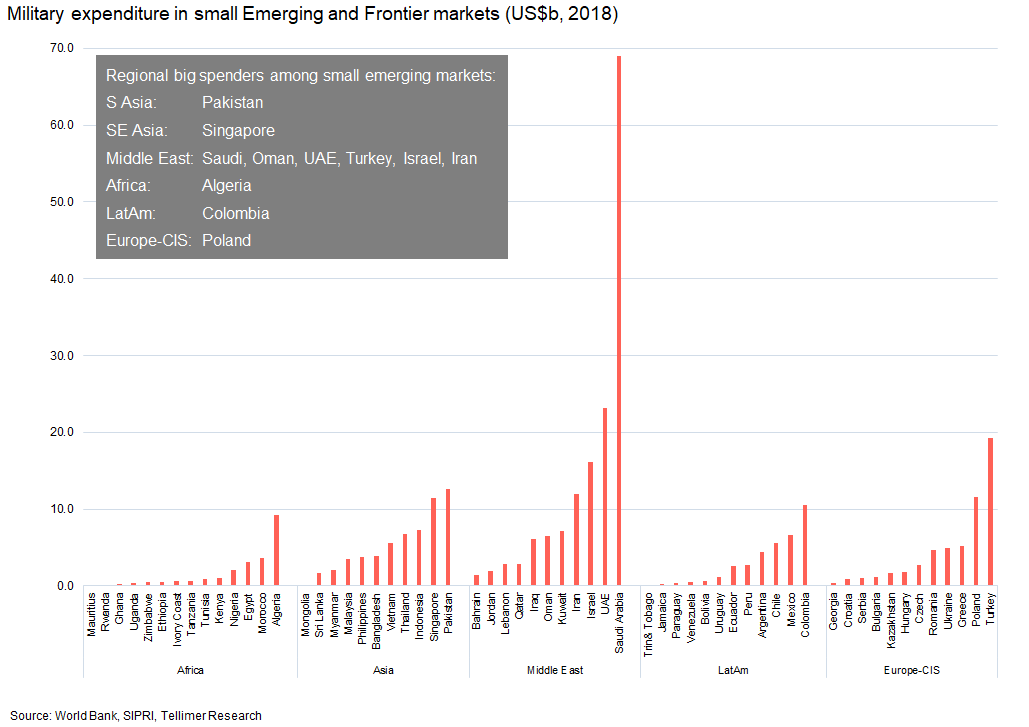 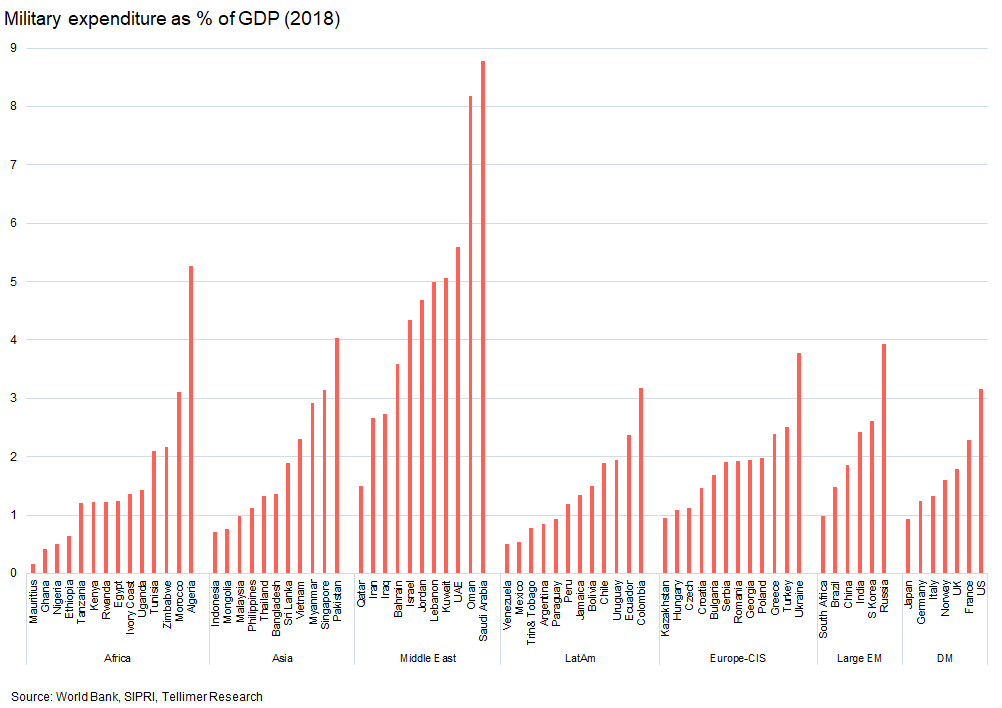 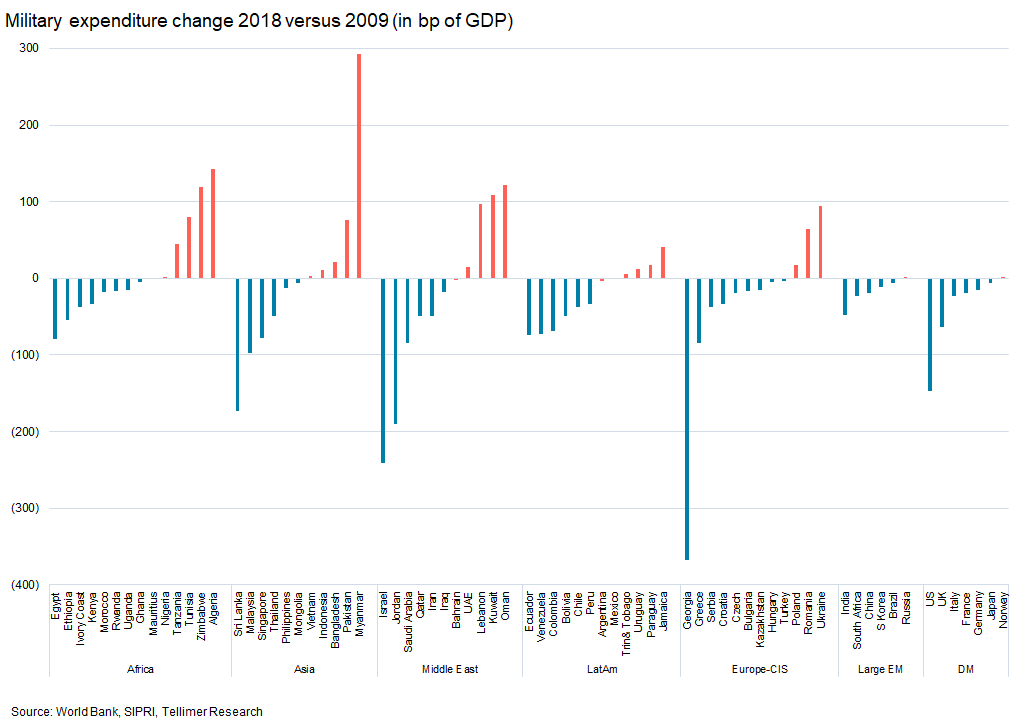 'Westlessness': What it means for investors in EM and FM, 17 February 2020

Trump impeachment: What it means for Emerging Markets, 19 December 2019