El Salvador announced the results of its second tender offer for the 2023 and 2025 global bonds last night (see here). The offer was launched last week and closed on 6 December.

Again, there were few surprises. The amount allocated to the second purchase was small, so it was never going to move the dial too much. Attention will now turn to the repayment of the crucial January maturity.

In total, the government was able to buy back US$82mn (notional) of bonds in its tender offer, out of a total outstanding of US$1.034bn (notional) in the two issues. That's just 8% of the total amount (and reduced the amount outstanding by the same percentage, taking it down to US$952mn). But the authorities' preference was for the '23s.

As previously announced, the aggregate amount set aside to purchase the principal accepted, and to pay accrued interest and any premium, was not to exceed US$74mn. This made it much smaller than the cUS$355mn used in the previous operation (which retired US$566mn in bonds across the two issues), begging the question, why bother?

All in all, there were few surprises. President Bukele was able to deliver on his promise to launch a second tender offer (never mind the outcome), but it does little to ease the burden of the looming 2023 maturity in January. But it was never likely to either. As such, default concerns will persist as expected.

El Salvador still faces the risk of default on a now US$604mn bond maturity on 24 January 2023 (it was US$667mn) – we see El Salvador as one of the countries most likely to default next year, although by virtue of these tender offers (which some might regard as a distressed exchange), it already has. But, even if the payment is made, we think default concerns will persist given the ongoing concerns over the lack of a credible and coherent financing plan, with limited visibility over financing sources, limited policy options, and still high debt service costs (after the '23s maturity, there is a bit of space until the next maturity – the smaller '25s – but interest on the bonded debt is still cUS$500mn a year compared with reserves of US$2.6bn in November).

We maintain our Hold on El Salvador bonds, with the 2032s indicated at US$42.9 (yield 23.7%) as of cob 7 December on Bloomberg (mid-price basis). The '32s jumped about 5-6pts around the time of the first tender offer, although have since been relatively flat around current levels. They are, however, up some 56% since their July lows; but down 31% ytd. We don't have specific recommendations on the '23s or '25s.

Bond prices already reflect some amount of distress (with prices around the high 30s, low 40s excluding near maturities), although we think they could be vulnerable on the downside if default materialises, while repayment of the bond could lead to a short-lived relief rally. 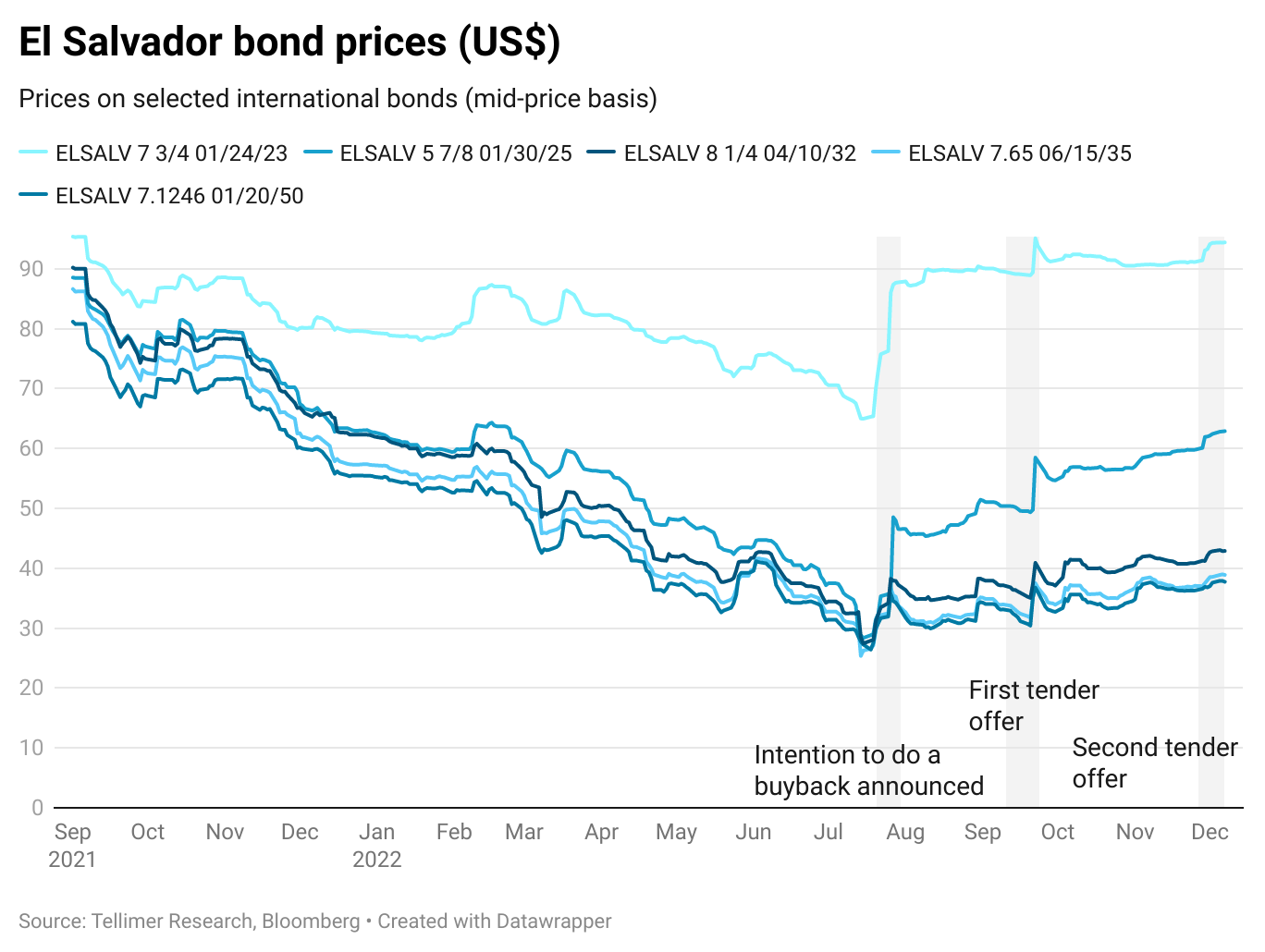