The clear out of stale gold longs continued yesterday resulting in the metal closing just ahead of the $1880.00.oz mark. What started with the market assessing the threat of tighter US monetary policy has cascaded in a full scale capitulation. As mentioned earlier in the week, it must be noted that the reason for tighter US monetary policy is a direct result of sustained higher inflation dynamics in the US, gold provides an excellent hedge against structural inflation which is what we are currently experiencing on a global level.

Oil prices are back under a bit of pressure this morning, with the focus back on China and the impact that the recent lockdowns have had on growth. Another city, Hangzhou, is undertaking mass testing, which has sparked concerns that we could see another major region placed under strict lockdown. The hit to oil demand as a result of these restrictions can be seen in China’s crude inventories, which have swelled to 81mn barrels if the country’s strategic reserves are included. That’s the most since January and suggests that demand has fallen by 2.4% since March.

Africa food aid: The US Department of Agriculture and Agency for International Development announced that they would together contribute nearly $700mn to international food aid efforts in the wake of the war in Ukraine. The support aid will be distributed to Ethiopia, Kenya, Somalia, Sudan, South Sudan and Yemen to support emergency food operations. In addition, the USDA will provide $388mn for transportation, shipping and other costs. Russia’s invasion of Ukraine has sent international food prices through the roof on the back of major supply concerns. Note that Russia and Ukraine are major supplies of staple foods to Africa. As such, the ongoing war in Ukraine has triggered significant food supply issues across the continent.

Ghana: The Finance Ministry said that Ghana’s economy is rebounding, with the economy expanding by 5.4% in 2021, more than one percentage point higher than expectations. The Ministry said that “these developments are positive and confirm the fact that the economy is rebounding post-covid, the rate of debt accumulation is tapering off, and there is a slowdown in fiscal expansion with Ghana on track to return to the Fiscal Responsibility Act deficit threshold of 5% of GDP by 2024. Ghana’s public debt stood at 76.6% of GDP at the end of 2021 compared to the Finance Ministry’s previously reported 80.1% of GDP.

Kenya: The Kenya Bankers Association has blamed the recent dollar shortages on strong demand from companies remitting dividends and manufacturers importing inputs. The Kenya Bankers Association debunked allegations that the central bank had directed lenders to ration dollars, adding that “the industry is in constant discussion with the central bank to ensure that the current imbalances are addressed as quickly as possible to bring the market back to normalcy.” The association noted that the supply of foreign currency continues to grow, supported by receipts from the country’s main exports and strong remittances inflows. The dollar shortages have compounded pressure on the Kenyan Shilling, which has come under considerable pressure in recent months. Adding to the headwinds for the KES have been elevated commodity prices which are detracting from Kenya’s external accounts.

Rwanda: President Paul Kagame was on the wires this week defending a controversial plan by the UK to send asylum seekers to Rwanda and said it’s holding talks with Denmark about a similar deal. The proposed plan is expected to cost the UK around $150mn. President Kagame said that “the partnership we entered with the UK has caused confusion amongst people saying the UK gave Rwanda money to dump people here,” adding that “we are not involved in buying and selling of people, with the UK or anybody. It’s just a problem that needs to be solved, and Rwanda is ready to help.” The proposed asylum relocation plan has put the UK and Rwanda into the spotlight.

Botswana: Today sees the Bank of Botswana announcing its verdict on interest rates. Recall that the bank has been reluctant to hike rates preferring to look through the current phase of inflation, classing it as transitory. The BoB has extended its timing of when it expects inflation to return to its 3-6% target band however we do not see the bank shifting from its current stance at the moment. It is worth noting that the bank announced it would be revamping how it manages interest rates by shifting the current reference rate to using the yield on the main monetary operations instrument as the policy rate. “The improvements to the monetary policy operations will designate an anchor policy rate capable of affecting liquidity management decisions of banks, and thus providing a direct link to policy changes.”

Forex: Inflation pressures in Zambia ease on the back of the recent Kwacha strength

The Zambian Kwacha has performed exceptionally well over the past nine months amid optimism that the new government can steer the country back towards a fiscally sustainable position while at the same time reviving the crippled economy through the implementation of much-need structural reforms. While there is still a long way to go before the country is right-sided, the Hichilema administration has made some significant inroads in the first few months in power. Most notable was the securing of a staff-level agreement with the International Monetary Fund late last year, and more recently, the government has managed to convince China to join its debt restructuring efforts.

The positive fiscal and geopolitical developments have come on the back of elevated international commodity prices, which have significantly boosted tax revenues and foreign currency inflows. Notwithstanding the recent correction lower on China growth concerns, international commodity prices, and more importantly for Zambia, copper prices, remain elevated when compared to historical levels. The combination of the above-mentioned factors has seen the Zambian Kwacha strengthen by around 25% since June 2021, making it one of the best-performing currencies in the world in recent months. 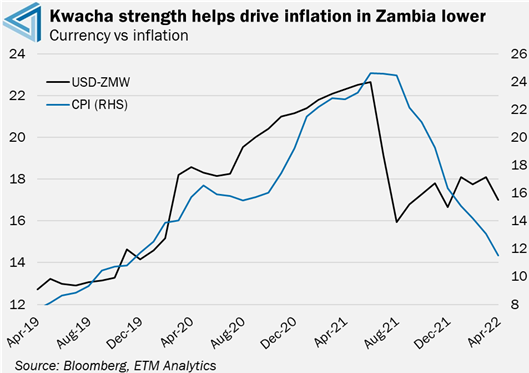 The sharp appreciation in the currency on a year-on-year basis has had a material impact on the cost of imported goods and has helped offset the robust external price pressures. For context, the Zambian Kwacha was trading north of 22 to the USD at the end of April 2021 compared to just over 17 to the USD currently. Note that Zambia imports everything from fuel to food, so the marked appreciation in the local currency has had a major impact on price growth. High base prices have also contributed.

Data published on Wednesday revealed that headline inflation slowed to a two and a half year low of 11.5% y/y in April from 13.1% y/y in March. This compares to consumer price growth of 22.7% y/y in April 2021. While headwinds for the Zambian Kwacha remain acute, we remain bullish on the currency on the back of expectations that the government will secure a deal with the IMF in the months ahead. Moreover, once the covid situation in China is brought back under control, we are likely to witness a rebound in international copper prices, which should boost Zambia’s terms of trade. The expected resilience in the Kwacha should help ease pressure on the Central Bank of Zambia to hike rates aggressively in the months ahead.

Given its sensitivity to the war in Ukraine, Egypt has been in the spotlight in recent weeks. Egypt is arguably the most sensitive African country to the knock-on effects of Russia’s invasion of Ukraine. The north African country is suffering reduced tourism inflows, higher food prices and greater financing challenges as a result of the war. The wheat situation has garnered the most media attention. Egypt is the world’s largest wheat importer and has been importing around 80% of its wheat from Russia and Ukraine.

The war has hit Egypt’s external balances and sounded fiscal alarms. The adverse impact of the war comes on the back of tightening global conditions amid the hawkish pivot from major central banks. Egypt’s external vulnerability risk has increased amid non-resident capital outflows triggered by the Russian invasion of Ukraine and rising developed market bond yields. According to the central bank, Egypt’s net foreign asset position fell by $13.7bn to -$5.1bn in March amid non-resident capital outflows related to the risk-off conditions and renewed fiscal concerns.

While the fiscal premium demanded by investors for holding Egyptian bonds has risen sharply this year. The International Monetary Fund expects Egypt’s debt to GDP ratio to decline to pre-pandemic levels by 2025 or 2026. According to the regional economic outlook that was released on Wednesday, the IMF expects that public debt in Egypt will reach 94% of GDP during the current financial year and that it will decline to 89.6% of GDP in the next financial year. Moreover, it is worth pointing out that Egypt’s foreign debt is not that high, with the bulk of Egypt’s debt denominated in local currency, limiting the country’s vulnerability to external shocks. 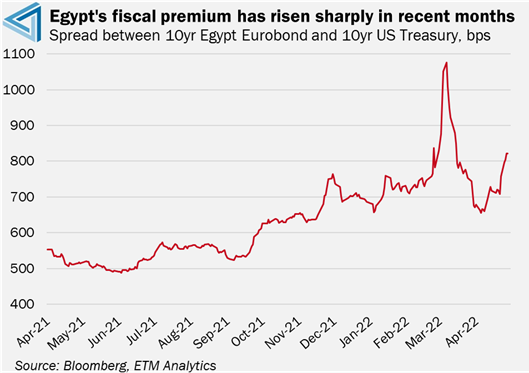 The Egyptian government is working with the IMF on designing a new loan-backed programme to support the Egyptian economy and address the ongoing challenges against the severe repercussions of the war in Ukraine. While fiscal risks in Egypt have risen on the back of the war and are acute relative to other emerging markets, the IMF highlighted in its latest report that the level of Egypt’s external debt is not alarmingly high. From a financial market perspective, while we expect Egyptian bonds to remain under pressure in the near term, we are not overly concerned about the recent escalation in fiscal risks associated with Egypt and still see Egyptian bonds as an attractive investment given the high yields on offer.

Macroeconomic: The wealth of elite Africans is expected to surge over the next decade

While off of a relatively low base, private wealth growth in Africa is expected to trounce other regions of the globe over the next ten years. The report suggests that the centi-millionaire wealth band stands to benefit the most in the years to come. In Southern Africa, wealth creation in Mozambique is expected to be driven by strong growth in the tourism, business process outsourcing and manufacturing sectors. In Zambia, wealth generation is expected to stem from the mining and financial services sectors over the next decade. Meanwhile, wealth growth in East Africa is expected to come from robust growth in the tourism, real estate, and financial services sectors.

While this is encouraging, there are significant concerns over whether the wealth generation will be spread more evenly across the various populations or if inequality on the continent will worsen. This will be dependent on fiscal policy and reforms. While we expect inequality on the continent to remain rife in the near term, there is a massive drive to address the situation. The strong economic growth expectations against the backdrop of maturing financial markets imply that Africa will be a hot investment destination over the next decade.