The IMF announced yesterday that it had reached staff-level agreement (SLA) on the combined fourth and fifth reviews of Ecuador's Extended Fund Facility (EFF). Board approval will allow the disbursement of cUS$1bn, taking total disbursements under the programme so far to some US$5.75bn (89% of the total amount available; from 74% currently). However, board approval is subject to the implementation of prior actions, notably to do with progress on some structural reforms.

In its statement, the IMF noted that the successful vaccination campaign (covering over 80% of the population) and responsible management of public finances are supporting economic stabilisation, despite the external shocks caused by the war in Ukraine. Ecuador should benefit from higher oil prices, although we suspect some of this will be offset to an extent by higher subsidies and food prices.

Indeed, fiscal and monetary balances for September and December 2021 were better than projected at the time of the last review, presumably helped by higher than expected oil prices (we observe there are no fiscal projections in the new WEO, probably because of the timing of the review).

The IMF projects real GDP growth of 3% in 2022 (albeit down from 3.5% at the time of the last review), and 2¾% in 2023 and over the medium term, although this was subject to significant uncertainty. Trend growth of 2¾% is unchanged from the last review.

Crucially, the statement said Ecuadorian authorities remain highly committed to the objectives of the programme to stabilise the economy, ensure fiscal and debt sustainability, expand the coverage of social assistance programs to protect the vulnerable, promote a transparent management of public resources, and to lay foundations for jobs-rich growth.

However, the IMF noted mixed progress on implementing structural reform. On a positive note, the Fund pointed to the tax reform that was passed in November 2021, the publication of a methodology for estimating and reporting domestic arrears by public sector entities, and the establishment of the National Fiscal Coordination Committee (NFCC). However, progress was needed on the initiation of independent audits of the financial statements of Petroecuador and Petroamazonas, the state-owned oil companies, and the issuance of procurement guidelines (both seemingly prior actions).

Board approval will mean there are just two reviews left under the original schedule before the programme expires – the sixth and seventh from 15 August and 1 December, respectively (with disbursements amounting to US$300mn and US$400mn each). Separately, Finance Minister Cueva said that a further US$700mn was expected from the Fund at the end of the year and that the government expected to receive more than US$3.5bn in multilateral loans by year-end, according to Bloomberg reports.

It is perhaps too soon to think about what happens next, after the IMF programme expires – whether the authorities will seek a successor arrangement or not. But that will be a topic of interest for investors as the time nears.

We maintain our Buy recommendation on Ecuador (Caa3/B-/B-), with a yield of 10.2% (price US$83.4) on the 5% 2030s as of cob 11 May on Bloomberg (mid-price basis). After a solid start to the year, the bonds have weakened with the war in Ukraine and rising global rate outlook, although they have still managed to hold on to their outperformance. The '30s have seen a total return of 2.7% ytd vs -14.3% on the Bloomberg EM Aggregate Index. 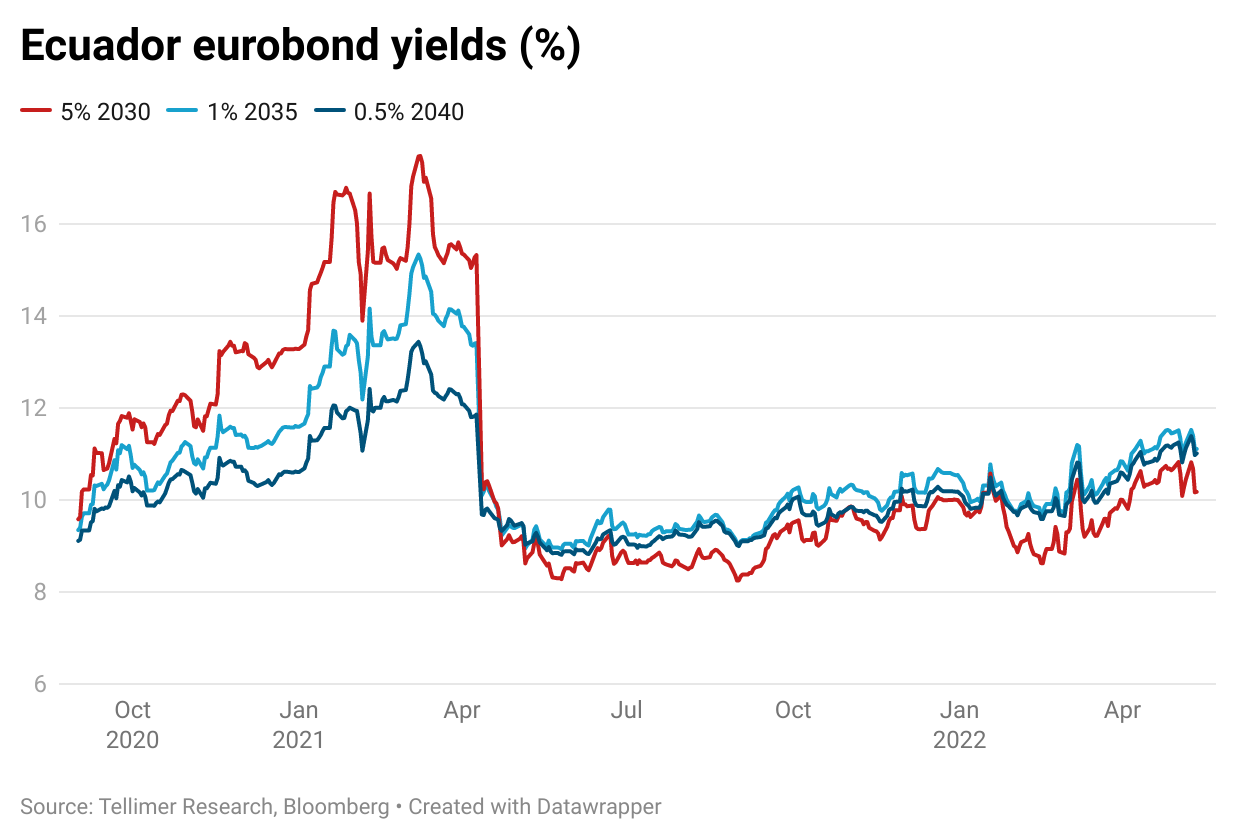