Domestic politics in EM after Covid-19: Authoritarianism and inequality

In our latest look at the long-term impact of Covid-19, we focus on the implications for domestic politics in Emerging Markets. Unfortunately, we think many of the changes may be for the worse, with governments imposing greater controls on society, more strained relations between local and central governments, and widening inequality.

So far in the imposition of social distancing, travel restrictions, contact tracing and quarantine policies in the response to Covid-19, governments globally, whether in authoritarian or democratic regimes, have taken steps to limit individual behaviour. In many cases, emergency executive powers granted under constitutional rules have been invoked. The timeframe over which these emergency powers will be exercised is as ill-defined as the timeframe during which Covid-19 will remain a systemic threat.

Furthermore, the surveillance capabilities of modern communications technology (communication on an open internet network, location-pinpointing and widespread smartphone use) provides a mechanism for governments wishing to prioritise security over personal information privacy. In the same way that governments, authoritarian or democratic, can appeal to nationalism or populism over individual liberty in determining the social contract, they can appeal to security over individual liberty.

The Covid-19 crisis may act as a catalyst for more widespread occurrence of this surveillance, as citizens grow as used to governments using their private data as corporations (Facebook et al) do.

In the initial response to Covid-19, many pointed to a relative advantage that explicitly authoritarian governments, eg China and Vietnam, have in imposing draconian measures such as social distancing. But it is no coincidence that the executive leadership with authoritarian leanings in notionally democratic governments have used the Covid-19 as an opportunity to strengthen their powers under a constitutional framework, eg Hungary and Sri Lanka.

The control of information and the shaping of popular perception is a part of this discussion. One of the challenges in countering Covid-19 has been the availability of objectively verifiable data on the number of infections, on the nature of the virus itself (many weeks into the global spread, the Trump administration in the US was still downplaying its significance), on the appropriate responses (whether to wear face masks, how communicable is the virus, the concept of herd immunity, the effectiveness of lockdowns), and on the state of preparedness (many weeks into the global spread, the Trump administration was also overplaying the resilience of the US). Governments will seek to control narratives via all media even more in a post-coronavirus world, because their political legitimacy is tied to popular perception of how well they have prepared for and responded to crises. The sort of censorship of online media traditionally associated with China may be as likely to spread to countries that consider themselves highly democratic.

Decentralisation: Relations between local and central governments will strain

In the case of countries as far apart as the US and India, central (federal) governments have appeared to follow the local (state) government policy responses in, for example, imposing social distancing or procuring healthcare equipment.

In multi-layered and multi-party political systems, relations between central and local government, particularly when there is significant devolution of sovereignty and both are not controlled by the same political party, may strain more often after the precedents set during the Covid-19 episode.

The sudden economic stop brought about by policy responses to Covid-19 is, to use tax terminology, regressive. The economic impact on lower-income segments (who lack the liquid savings needed to sustain their consumption) has been proportionately much greater than on higher-income segments.

This is seen starkly when comparing the effectiveness of fiscal relief on informal segments of the workforce compared to formal (and is one of the reasons why many emerging markets, with large informal workforces, are reluctant to mothball their economies for long).

Hysteresis effects (the impact of shocks to parts of an economy can far outlast the duration of those shocks) manifest themselves particularly acutely in low income and informal workforce segments: the increased incidence of starvation in a sudden economic stop or the permanent loss of jobs.

The overall result is that a major shock, such as Covid-19, likely causes a lasting impact on inequality with the resulting negative implications (eg crime and insecurity, strain on welfare states, appeal of populist politicians, recruitment of disenfranchised members of society by terrorist or anarchic movements). 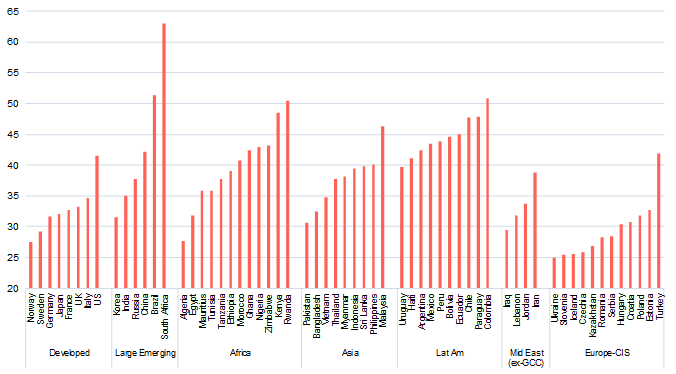 You can read more in our recently published report Waiting on the World to Change, in which we explore how the current crisis will result in new normals for politics, macroeconomics, business models, and finance.