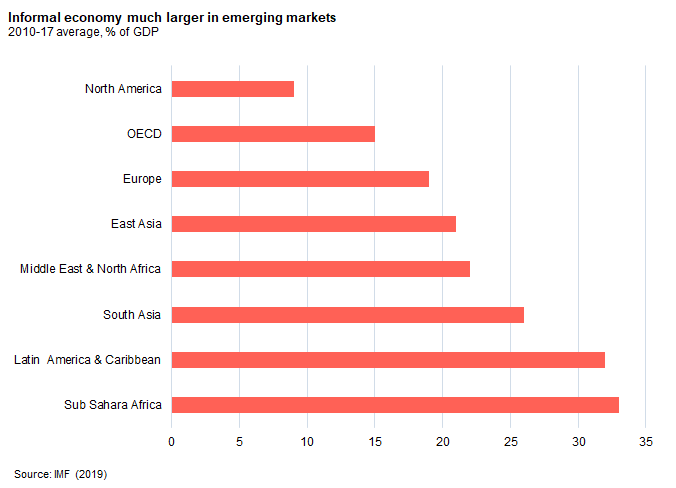 Reliance on informal labour in frontier and emerging markets

The high incidence of informal labour* in most emerging markets likely creates an obstacle to the implementation of social distancing policy in response to the coronavirus. Working from home is often not an option in the informal sector (the opposite description of what has come to be known as the "gig economy" in developed markets, where working from home, or at least outside a traditional, formal office setting, is the norm).

Reliance on un-taxed informal workers also reduces the fiscal space (low tax base) from which to finance public spending stimulus (or indeed the mechanism through which to implement this, ie there is no point in granting tax relief to a labour force which does not pay tax in the first place).

The GCC (particularly, the rich city-states of Abu Dhabi, Kuwait and Qatar), with its reliance on documented, expatriate labour is an exception. Its deep sovereign wealth is an exception as well in this context. 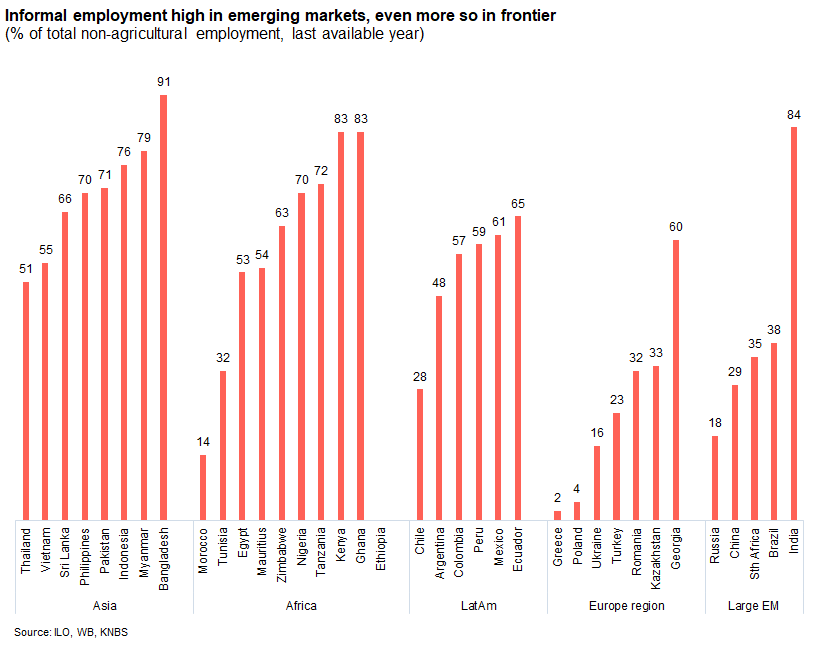 Most emerging and frontier countries face multiple challenges in dealing with coronavirus in the manner which, for example, China, with its ability to quickly enforce draconian social isolation, or South Korea, with a combination of widespread testing and (belated) social isolation, appear to have done. It remains to be seen whether we have seen the last of critical infection spikes, or, indeed, how reliable is the data released on infections (eg China new infections have barely changed for the last 3 weeks). These challenges are almost universal and make it wishful thinking to imagine that particular countries (or, entire continents, like Africa) may be relatively immune from coronavirus-related disruption.

These challenges include the following:

These challenges and others (such as a generally older demographic bias) also exist in developed markets but financial resources, welfare state safety nets, healthcare infrastructure, better rule of law, greater levels of education, may mitigate them, all other things equal (eg early imposition of social distancing).

* Informal labour is defined by the ILO as paid workers that are "not registered, regulated or protected by existing legal or regulatory frameworks...informal workers do not have secure employment contracts, workers' benefits, social protection or workers' representation".