China is reportedly about to pass a new law, under the banner of national security, to prevent foreign interference, terror, secession, sedition, and subversion in Hong Kong. It may also be used to effectively prohibit dissent.

The passage of the law by China’s National People’s Congress (NPC) could effectively circumvent Hong Kong’s own legislature by adding it to those national laws which must be observed in Hong Kong (under Annex III of Hong Kong’s Basic Law).

Below we explore the local Hong Kong, China, global geopolitical and investment implications of this.

The local context is the following:

In 2003 there were also large scale protests against a locally proposed Sedition Law (Article 23 of the Basic Law, which ultimately was not passed).

The key question is whether a Tiananmen Square moment is approaching which triggers a lasting exodus of multinationals and expatriates from Hong Kong?

Modern social media makes it much more difficult to control and contain the narrative from a brutal crackdown. An expat exodus would certainly put Hong Kong real estate to another stern test but, equally, multinational corporates have shown repeatedly that moral outrage does not last long, if at all, in comparison to the pursuit of profit. 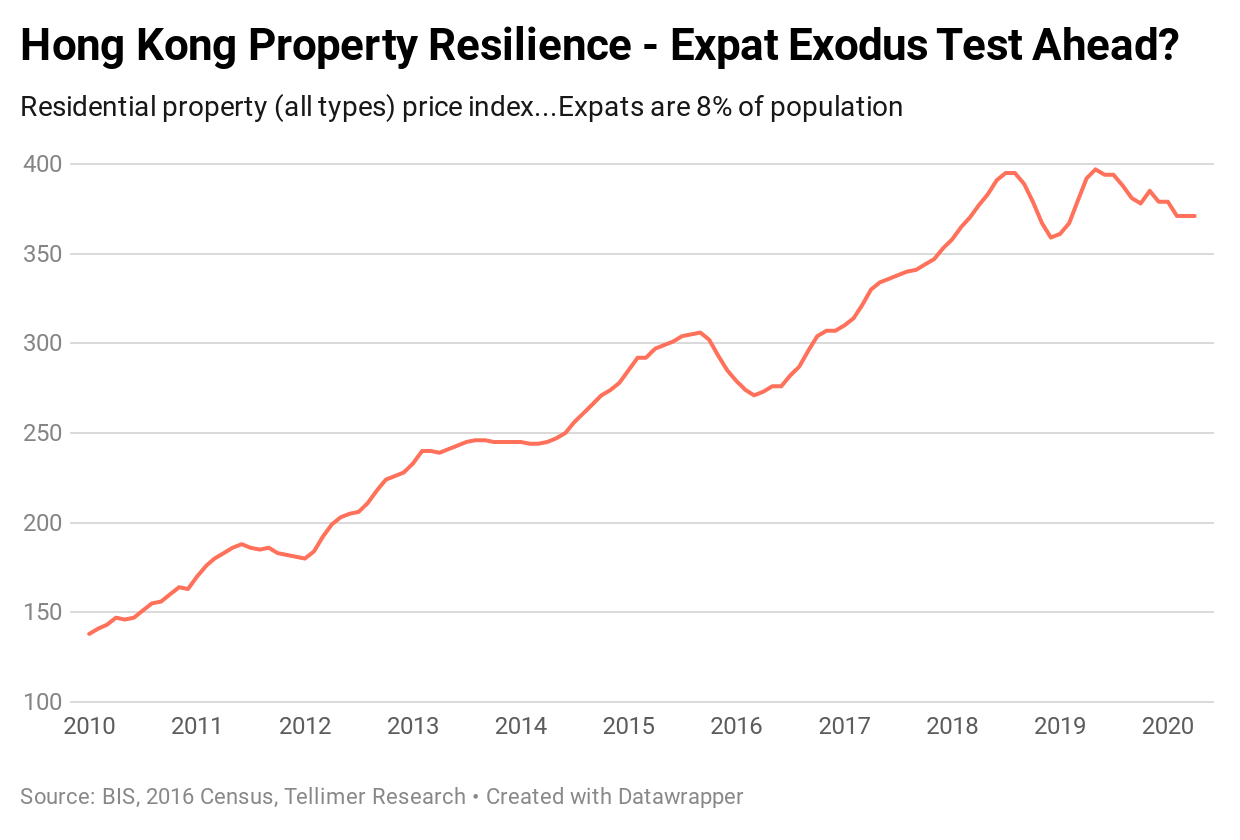 The national Chinese context is that security is paramount in a country where the central government’s grip over its vast swathe of provinces has, over the course of the country’s history, not always been assured, and the social binding from economic growth (which has in recent decades mattered as much as coercion) is at risk from domestic debt, pressure on exports and aging demographics.

The key question is whether China can reinvigorate its economic growth model to keep social cohesion intact and the current leadership on track, or whether there is a reversion to greater reliance on political repression (ie the model of the Communist Party prior to Nixon’s detente and Deng Xiaoping’s reforms either side of Tiananmen Square)?

Given its domestic debt and demographic challenges, the marginal driver of growth may still be more dependent on external demand factors than domestic ones; ie there is a limit to how much the government, on its own, can restore growth to previous rates.

The global context is that relations with the US are perhaps at, or heading towards, their worst since the Nixon 1972 detente (which prized China away from the orbit of the USSR).

Relations under Trump have become particularly fractious (most notably in the aftermath of Covid-19 and in advance of the US election) but multiple tensions have been brewing since well before Trump’s 2016 election campaign:

There is little doubt that, particularly in an election year, Trump (and Pompeo) will exploit whatever opportunity they see to pressure China (or, more accurately, deflect blame for Covid-19 deaths) and this includes Hong Kong (as much as it does Covid-19).

Democrat presidential candidate Biden also identifies China as a threat (the difference is his response is multilateral compared to the unilateralism of Trump).

The key question is whether that will have much impact on China’s leadership, which does not have to contend with elections (and the resultant short-termism it encourages in policy)?

The indications so far this year are that China is acting more assertively (provocatively, its critics would say) on several existing points of foreign friction (India, Taiwan, Vietnam) and has not hesitated to respond to new ones (Australia).

Furthermore, its leverage with countries between it and the US is arguably enhanced in a global economic environment where so many countries (not merely relatively small Frontier markets like Pakistan or Philippines, but larger Emerging ones like Brazil and South Africa, as well as Developed ones like Italy and UK) are in need of sovereign (re)finance and inbound direct investment.

Investments: weaponisation of capital by the US, China A shares outperformance at risk

In turn, in the style of tit-for-tat tariffs, does this ultimately lead to a sell-down of the Chinese government’s holdings in US treasuries (although the absence of reserve currency alternatives to the US Dollar may limit this)?

We may see those draconian, previously unimaginable scenarios, appear on the horizon before this new Cold War de-escalates. From the perspectives of Hong Kong and China, the risk of disruption is going to get worse and from the perspective of international relations, the neutral space in between the US and China will continue to contract.

That is a bleak conclusion for emerging market investors. Year to date the performance in equities suggests that those risks are reflected much more in equities across EM than in (outperforming) China A-shares. There appears to be an implicit assumption that Covid-19 has been conquered in China and economic activity will return to the old normal, even though the world China faces looks ever less like the old normal.