Brazil-Argentina common currency: An idea so bad, why is it being discussed?

Brazil and Argentina are talking publicly about the idea of a common currency. There is no stated timetable at this stage and such discussions have taken place before.

Brazil and Argentina are a long way away from the convergence in economic policy and performance required to launch monetary union, likely lack the political will to enshrine the adherence to this convergence, and such a union may not be suitable for them in any event, given that they are not even each other's largest trading partner, and a unified currency might distort competitiveness in non-commodity exports.

Note that both Brazil and Argentina have a history of managed or fixed exchange rates which did not end well.

If this is such a bad idea that one wonders why it is being discussed at all? A sign of solidarity between two leftist governments, a response to economic policy which, to differing degrees in each country, has lost credibility, a response to last year's US dollar strength – none of these are compelling justifications.

For Argentina, in particular, the idea of a currency union should in no way distract investor attention from the actions it needs to take to correct course to tame inflation, fiscal deficit, remove capital controls, and close the gap between the official and parallel exchange rates. Furthermore, tying itself to an economy over three times its size might mean it makes more sense simply to adopt Brazil's currency as its own. 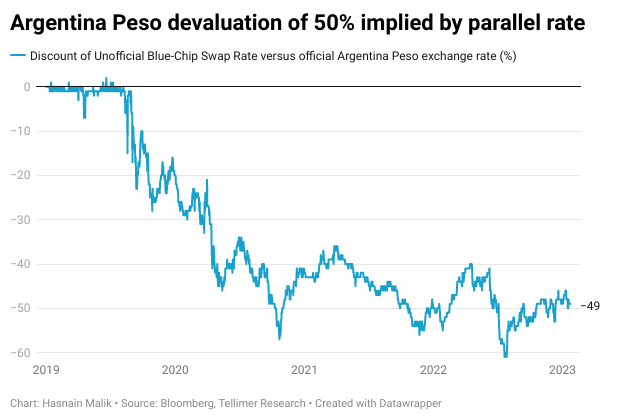 Monetary union is a bad idea

The benefits of monetary union might be the following:

The credibility of economic policy in both Brazil and Argentina have been undermined in recent years by, among other factors, loose fiscal policy.

Argentina has defaulted for the ninth time on its sovereign debt, is suffering from high inflation, and its ruling Peronist coalition, which faces an election in October 2023, is divided over taking the corrective policy actions required to keep IMF assistance on track.

Both need to re-establish credibility in this regard but a monetary union is much more difficult than, for example, a refreshed debt or deficit ceiling.

Although significant, Brazil and Argentina are not each other's largest trading partners.

The establishment of a monetary union requires, at least, convergence in economic performance and policy – this is far from the case in Brazil and Argentina currently, whether measured by differentials in inflation, fiscal balance, or short-term external debt vulnerability. 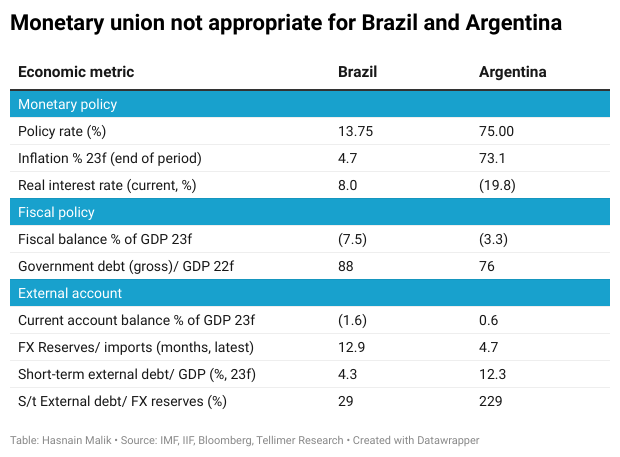 The maintenance of a monetary union requires the political will to establish a lasting commitment to unified monetary policy, eg via an independent and combined central bank, and to harmonised fiscal policy.

Both require constitutional reform, which is likely well beyond congresses in both countries that struggle to establish majorities beyond business-as-usual legislation.

Overall, we expect domestic political risk to cast a shadow over LatAm equity markets although most, ex-Argentina, are cheap relative to historic average. Chile, where copper export revenues should benefit from China re-opening and Peru protests in the short-term and the renewable energy transition in the long-term, is our top-pick.

Between Brazil and Argentina, we regard the former's exchange rate as cheap enough versus historic average to offset risks associated with domestic political polarisation and the latter as untouchable given ongoing capital controls and set up, at best, for a temporary reversion to market-friendly policy in the event of opposition win in this year's election.