Global bond yields continued to slump yesterday with USTs and gilts leading the way. USTs caught a bid following some weaker-than-expected manufacturing data out of the US, suggesting that the economy is starting to struggle under the pressure of rising interest rates and still high inflation. Gilts, meanwhile, reacted to news that the UK is flip-flopping on its controversial tax measures, which have roiled the markets in recent weeks. The US 5yr tenor led the gains through the session, with its yield sliding by more than 30bp, showing how a lack of liquidity in the market can lead to some outsized moves and keep general volatility levels extremely elevated. This did, however, provide some reprieve for risk assets with equities having one of their best days since July, while emerging market FX and commodities also caught a bid.

The weaker than expected data and rally in bonds has meant that traders have trimmed their wagers on Fed rate hikes going forward. Fed-dated swaps fell quite sharply yesterday for those covering early 2023 meetings, with the peak policy rate now expected to come in at around 4.45% as opposed to 4.60% seen recently. Focus now will turn to the US labour data out this week, which could keep volatility within the market quite high given the two-way risks that the figures pose.

Egypt: The World Bank announced yesterday that it had approved a $400mn loan to Egypt to develop the logistics and transportation sectors and support the shift towards lower carbon emissions. According to the World Bank, the project will focus on developing a railway bypass in Egypt's congested Alexandria-the 6th of October-Greater Cairo Area railway corridor, allowing for increased capacity and decongesting areas with high demand for passenger trains. According to the World Bank, Egypt's transportation sector is the second largest contributor to greenhouse gas emissions in the country at around 19%, and the railway project is likely to reduce emissions by 965,000 tonnes over 30 years.

Egypt: Central bank data showed that Egypt's net foreign assets (NFA) resumed a near year-long decline that had paused in July. Specifically, Egypt's NFA fell by EGP 18.06bn ($925mn) in August to EGP -385.9bn from EGP -367.8bn a month earlier. Note that the Central Bank of Egypt relies on NFAs, which represent banking system assets owed by non-residents minus liabilities to help support the currency. However, Russia's invasion of Ukraine, sparking investor unease, and the aggressive tightening by major central banks have triggered an outflow of funds.

Kenya: Kenya's central bank downplayed comments from the deputy president suggesting the country is facing a currency crisis. The central bank yesterday said that it has sufficient foreign-exchange reserves and that it doesn't supply foreign currency for transactions other than for national government. The bank added that "oil importers, therefore, obtain their requisite foreign exchange from the commercial banks and not the central bank." Kenya's foreign exchange reserves fell to $7.42bn by September 29, compared with $7.45bn a week earlier. The reserves are sufficient for 4.19 months of import cover and are just above the four months' cover the central bank aims to maintain. Reserves have come under pressure as the central bank tries to support a weakening shilling, while tighter global financial conditions have led to an outflow of foreign capital.

Nambia: Local reports indicate that Namibia is set to receive a $155mn loan for recovery from the African Development Bank. The loan will support the country's resilience and post-pandemic economic recovery. Note that the program seeks to strengthen governance and implement reforms in the transport, water, and sanitation sectors.

Oil: The oil markets remain focused on the upcoming OPEC+ meeting as expectations continue to build that the cartel and its allies may announce a significant output cut on Wednesday. The expected cut has supported prices since early last week, with Brent back near the $90 per barrel level when looking at the front-month contract, while WTI has rallied recently back up to around $85 per barrel. Time spreads have also widened out once again, indicating expectations for tighter supply conditions over the near term. A reduction in output quotas of a combined 1mn barrels per day is currently what is priced in. Therefore, anything less than that will be seen as a disappointment and would lead to a resumption of the retreat in prices. However, it should be noted that even if the official cut announced is around 1mn barrels per day, the actual drop in production levels will be much smaller given that several nations are already producing well below their quotas. Therefore, for oil prices to enter into a sustained rally and head back towards $100 per barrel, we may need to see some adjustments made to the quotas for individual members.

Ghana: Ghana’s Cocoa Board on Monday signed $1.13bn syndicated loans for 2022-23 cocoa purchase. The Cocoa Board signed a facility with a consortium of banks following a roadshow to raise $1bn. The Cocoa Board chose to sign a larger amount due to oversubscription. The signing of the loans will provide Ghana with the much-needed foreign exchange, which will also help support the Ghanaian cedi,  Africa’s worst-performing currency against the USD on a year-to-date basis.

The Kenyan shilling has repeatedly plunged to record lows this year, weighed down by high oil prices and hard currency demand from sectors including energy and manufacturing outmatching supply. Moreover, declining farm export receipts amid the worst drought in decades have resulted in reduced foreign currency inflows. Note that agricultural exports are an essential source of foreign currency exchange in Kenya. Against this backdrop, the shilling has lost almost 7.0% since the start of the year against the USD. 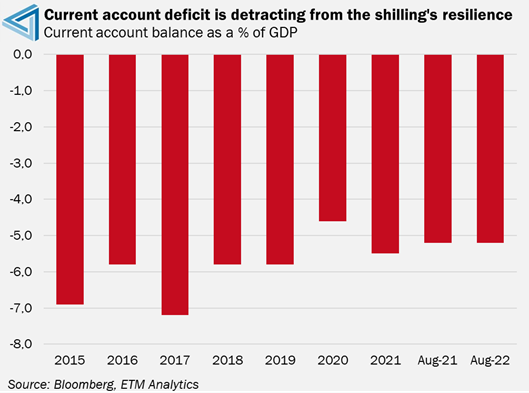 Further compounding pressure on the shilling has been a persisting current account deficit. Provisional data from the Central Bank of Kenya showed that the current account deficit was estimated at 5.2% of GDP in the 12 months to August 2022, a similar position recorded in the corresponding month of 2021. According to the CBK, the deficit was supported by receipts from service exports and resilient remittances.

Overall, Kenya continues to run current account deficits, and this could see the shilling, which remains overvalued on a real effective exchange rate basis, continue to extend its bearish trend in the near term. Looking to this week, dollar demand from fuel importers and corporate clients is set to outweigh supply, suggesting that the selling pressure is unlikely to abate.

Fixed Income: Sell-off in Zambian Eurobonds has halted for now

After plummeting throughout September, Zambian Eurobonds prices appear to have stabilized as investors weigh in on domestic and international developments. Domestically, the focus is centred on the budget, which was presented by Finance Minister Situmbeko Musokotwane on Friday and negotiations with the country’s creditors as the government pushes ahead with its debt restructuring plans.

While Zambia’s fiscal position remains extremely fragile, the government has displayed some encouraging signs that it is committed to steering the country back toward a sustainable fiscal position. Moreover, although the government is yet to begin talks with its creditors, Finance Minister Musokotwane said that he sees a debt restructuring memorandum of understanding by Q1 2023. 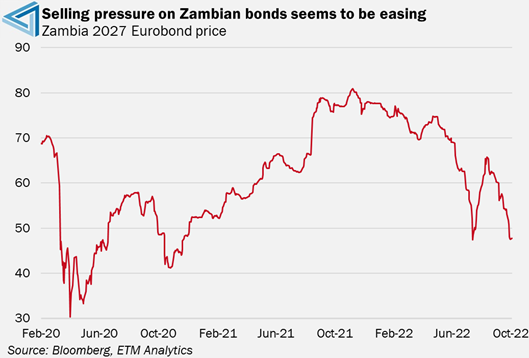 The positive fiscal developments and signs of prudent fiscal policy come against the backdrop of an improvement in global risk sentiment as growth concerns continue to temper hawkish interest rate bets. This was accompanied by the stabilization in core bond markets as the BoE resumed its bond-buying operations and after PM Truss was forced to reverse her tax amendments.

While the rout in Zambian bonds appears to have halted, for now, it is worth noting that Zambia’s 2027 Eurobond price is down almost 39% since the start of the year. This puts Zambian Eurobonds amongst the worst-performing bonds in the African fixed income basket. Given that Zambia is effectively still in default and that Zambian bonds are likely to be restructured, the sharp underperformance isn't surprising.

The sharp sell-off in Zambian Eurobonds and signs of debt consolidation from the government suggest that Zambian Eurobonds could be an attractive bet in months to come. However, there are still some big hurdles that need to be cleared before investors should look to turn bullish on Zambian debt.

Macroeconomic: Angola and Nigeria are major contributors to the OPEC+ oil supply gap

Nigeria and Angola are Africa’s two largest crude producers. While both countries have benefitted from elevated international oil prices, it must be noted that they haven't been able to fully capitalize on the high oil prices due to production constraints. Oil production in Angola and Nigeria has fallen sharply in recent years due to a number of idiosyncratic risks and ill investment. 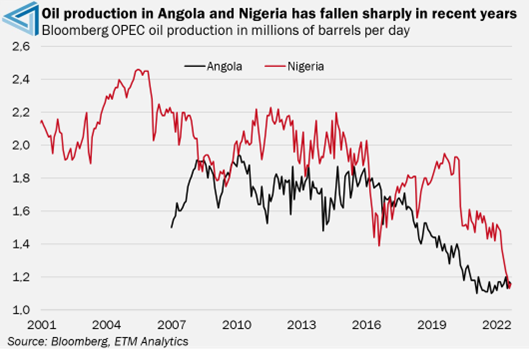 Looking specifically at OPEC data for Angola, crude production has decreased by 160k barrels per day since 2020. Despite the marked drop in oil production, the oil sector is still a significant contributor to Angola’s economy and a major source of foreign currency earnings and tax revenue. Oil production in Nigeria meanwhile has tanked by 670k bpd over the corresponding period. While oil still plays a vital role in Nigeria’s economy, the oil sector's contribution to the economy has declined markedly over the past decade.