Total passenger traffic of the 3 airport groups during April showed a 980.4% y/y rise (airports operated in Mexico). It is worth noting that passenger performance exceeded our expectations, exhibiting growth of 980.4% y/y (+11.4% m/m) and representing 77.3% relative to 2019 traffic, as compared to our estimate of 65.0%-75.0% for airports in Mexico.

The increase resulted from an easier comparative base (April 2020 was the first full month of the pandemic), as well as a solid demand performance supported by Easter Week. Traffic with the highest weight in the total, domestic traffic (67.4% of total aggregate passengers), registered a 742.4% y/y jump and international traffic a 2,497.5% increase.

·      The International Air Transport Association (IATA) mentioned that the industry crisis is longer than expected and that the outlook points to a clearer recovery beginning towards the latter part of 2021. In that sense, it estimates that travel (measured in passenger-kilometers, RPKs) will recover to 43% of 2019 levels, a 26% improvement, compared to 2020. It highlights a better dynamism in domestic passengers, while there are more restrictions on international travelers in certain countries.

·      Some participants in the Mexican airline industry have made important announcements regarding an increased fleet that will be operating during the year. Such is the case of Aeromexico, which reached an agreement to increase its fleet by 24 new Boeing aircraft, of which 9 will be incorporated next summer and the rest in 2H21 and 2022. Volaris also announced that it will be integrating 8 A320 NEO aircraft to the fleet in 2021 (in addition to the 3 from the previous purchase order with Airbus), among which 5 would enter into operation as early as this summer. We consider that this, in addition to being the result of more favorable leasing conditions, strengthens expectations of improved demand performance in the industry.

Conclusion... April passengers at airports operated by private groups in Mexico resumed strong growth and performed better than expected. Considering also operations outside Mexico, Asur stood out for showing the highest annual increases, although it should be noted that Gap was closest to pre-pandemic levels (2019). For the coming months, solid passenger growth will continue due to a very low comparative base and a better demand evolution. On the other hand, we must continue to monitor the development of restrictive measures in other countries (mainly the US, which is our main tourist supplier), as we believe they could ease relatively soon, and thus trigger a greater dynamism on the international side. We mention as favorable the fact that airlines have announced fleet expansion plans that bode well for improved demand behavior. Considering the above and the return of earnings growth from 2Q21, which will boost figures in 2021, we believe we should start participating in the sector. In our institutional portfolio we have exposure in Gap with a 2021 PT of MXN 245.00 per share and in Oma with a 2021 PT of MXN 146.00, both with a Buy recommendation. On the other hand, for Asur our PT 2021 is MXN 414.00 per share with a Buy recommendation.

In the following graphs below, we can observe the evolution of the total passengers of the airport groups as a percentage of the 2019 figures in the last 12 months and the performance of their shares vs. S&P/BMV IPC. 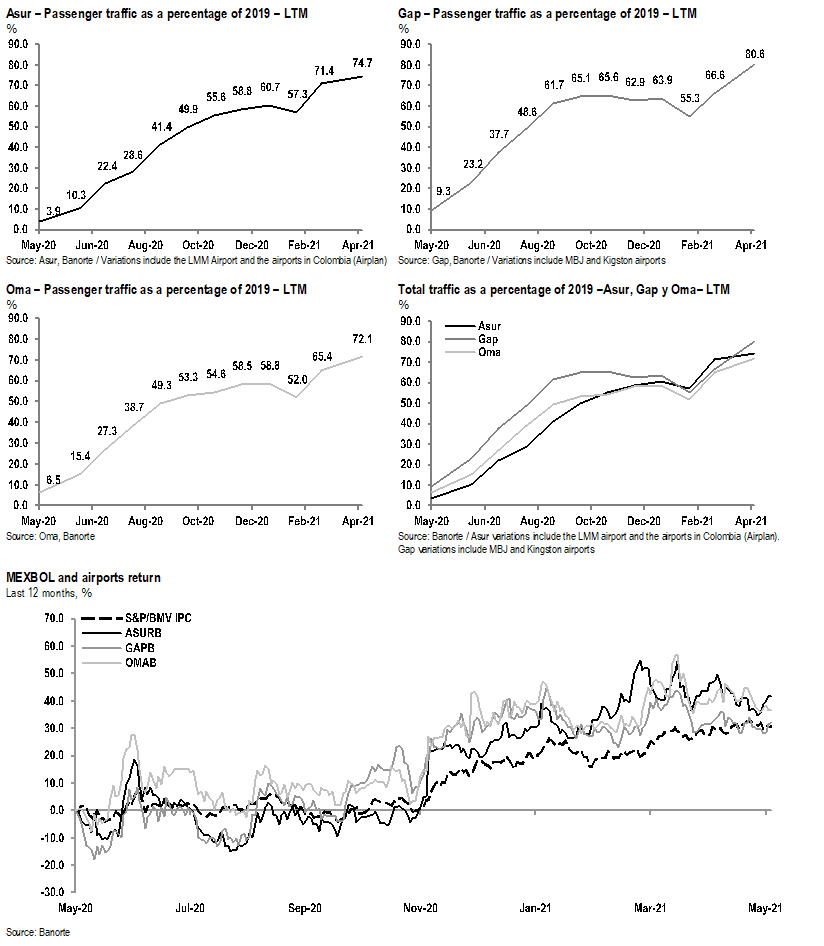 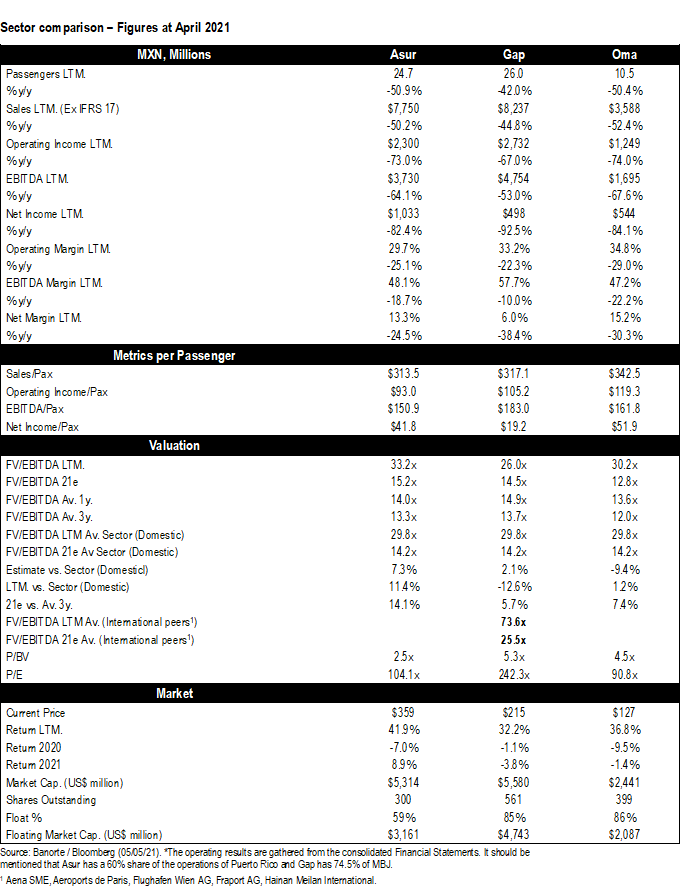