Headline inflation at 0.41% 2w/2w, surprising to the upside once again. The core reached 0.44%, with the same bias persisting for several fortnights (see chart below). Both were also higher than their 10-year averages of 0.31% and 0.24%, respectively. Goods (0.5%) remain as the greatest concern, mainly processed foods (0.5%), with articles such as corn tortillas among the top ten, extending their recent pressures. ‘Others’ were also high (0.5%). Seasonal distortions in services due to the start of school remain present. Education advanced 2.0% due to the return to school of basic education students (pre-school, elementary and middle school). Somewhat surprisingly, air fares went up 7.5%, while pressures in dining away from home continued (0.6%). At the non-core, energy (-0.2%) has moderated since 1H-July, this time around on LP gas (-0.9%) and low-grade gasoline (-0.7%). Agricultural goods (0.9%) were more affected by fruits and vegetables (1.2%) than meat and egg (0.6%). 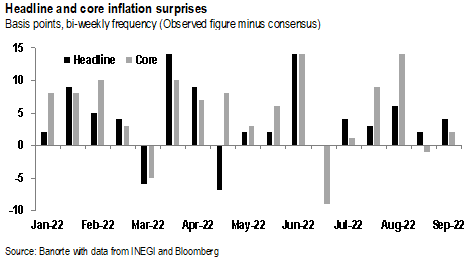 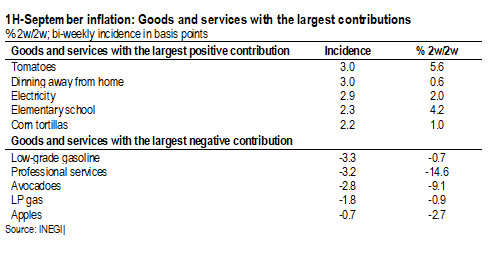 The peak in inflation is likely to be delayed further, so we adjust our year-end forecast to 9.0% from 8.1%... In bi-weekly frequency, annual headline inflation inched lower, to 8.76% from 8.77% previously. Although we recently stated that a high could be reached as soon as this month, a clear downward trend has not been established yet. The core picked up to 8.27% from 8.13%. Given persistent upward surprises –as shown above–, we are less convinced about a moderation in short-term dynamics for the rest of the year and adjust our forecast path, with the end of 2022 to 9.0% from 8.1% for the headline, and 8.9% from 7.8% at the core. It is our take that pressures will likely keep building in the short-term. Main changes include: (1) Higher processed foods at the margin as more companies adjust their prices due to accumulated cost pressures –as recently done by Coca-Cola FEMSA, Bimbo, and Lala, among others; (2) an increase in raw food prices, with risks for global production (due to climate challenges, including our country and others such as Argentina, Brazil, Australia, to name a few), and trade restrictions (e.g. India); (3) lingering supply chain issues affecting industries such as autos, with global behemoths Ford and VW, among others, warning about higher cost pressures and microchip shortages that could drag into 2023; (4) potential disruptions in trade, especially in Europe on the lack of natural gas and the upcoming winter, as well as zero-COVID policies in China; and (5) more modest discounts in “El Buen Fin” (Mexico’s Black Friday) as retailers’ profit margins have compressed. On the other hand, we also factor-in the recent decline in commodity prices, especially oil and gasoline. Moreover, there are encouraging signs of less bottlenecks in ports such as LA and Long Beach, helping reduce transportation costs and possibly improving inventory management.

…while the expected moderation for 2023 will probably be slower, changing our forecast to 5.4% from 4.1%. As we have said recently, we believe minimum wage (MW) negotiations for 2023 will be very relevant, with the announcement likely by early December. In this respect, we highlight that: (1) The minimum wage went from $88.33 in 2018 to $172.87 in 2022 (growing 18.3% per year compounded annually); and (2) recently, the National Wage Commission said that they want to update their MW target by the end of 2024 due to inflationary pressures, to $260 from a previous goal of $226. This new goal would imply 50.4% growth in two years from its current level (or 22.6% compounded annually). Although negotiations have not started formally, we anticipate an adjustment close to, or slightly higher, than 20%, considering the recent history and news. Therefore, we are cautious as an increase of this magnitude may well have a larger and higher ‘lighthouse effect’ for all formal sector workers.

On the other hand, we recognize that very high uncertainty prevails about the impact, magnitude, and duration of various drivers that have been pressuring prices. In this backdrop, we prefer to be conservative because of the rise in mid-term inflation expectations. The latter could result in additional adjustments higher, especially in the first and second quarters. Locally, more government resources for social programs’ payments could keep supporting domestic demand in the period, as we think happened during 1H22. In the external front, the potential escalation in the war between Russia and Ukraine could limit further a much-needed relief in supply, and even lead to new disruptions in raw materials, especially in food. On a more favorable note, we see a more rapid deceleration in annual inflation in the second semester due to: (1) The effect of global hiking cycles (including in the US and Mexico) on aggregate demand and commodities’ prices; and (2) an improvement in supply chain problems, including for the disruptive effects still present from the zero-COVID policy in China. 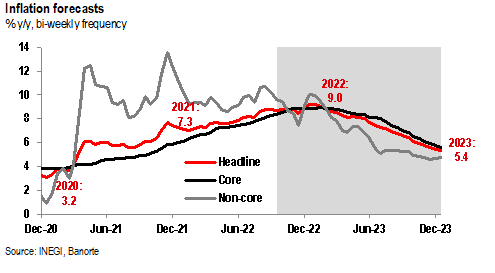 The curve is pricing-in an even higher terminal rate, close to 10.50%. Central banks are determined to curb inflation, raising interest rates at a faster pace. In particular, the Federal Reserve announced its third 75bps hike yesterday, above the 50bps seen before the August CPI report. In a similar fashion, prevailing inflationary pressures domestically have supported market expectations of a more restrictive stance from Banxico. In this sense, the curve is pricing-in implicit hikes of +198bps by the end the tightening cycle, close to 10.50%, from about +150bps as soon as on September 12th. This includes +75bps hike in the upcoming decision, on September 29th, in line with our call.

Since Banxico’s last announcement, CPI-linked bonds have lost 42bps on average, while the Mbonos curve has extended its flattening bias and inverted further. The latter because of a 100bps sell-off at the short-end and 70bps at the long-end. Long-term Mbonos –particularly the Nov'38 and Nov'42 nodes – have increased their attractiveness, trading at stressed levels close to +2σ from their 90-day MA and above 9.30%. However, we believe high volatility limits the room for directional positions. In this sense, we reiterate our preference for relative value trades, maintaining our recommendation to pay TIIE-IRS (26x1) and receive 2-year SOFR, initiated on August 18th.

[1] Using the general minimum wage, not the one that applies for the northern border region.

[2] For 2018 we use the whole-year average for the median wage. For 2022 we use available data from January to August

[3] Assumes that the average wage stays at the same level than so far in 2022.