Thailand election: Not a catalyst for policy implementation or political reconciliation

Thailand's election for the lower house of Parliament has likely resulted in a split of seats which gives grounds for both main political camps (one centred around the military and the other around the exiled Shinawatras) to claim they can form a coalition government. Near-term there is a risk, as with any election but particularly in Thailand, given its history of political protests and military coups, of the eventual opposition not accepting the results in an orderly manner. Medium-term, there is a risk to stability of any coalition and obstructionism for the passage of new laws.

There is a way to go yet before we see a clear picture of the next government. The Election Commission is still to announce the results of the 350 seats won by direct election (due later today, after a 20-hour delay), the final vote count which is used to allocate the 150 seats on the basis of proportional representation (due on 29 March) and the final official split of seats (due on 9 May). Thus far, most media coverage has focused on the split of the popular vote and the higher share for the party aligned to the military (Phalang Pracharath) versus the party aligned to the Shinawatras (Pheu Thai). But this matters much less than the ultimate seat count. Last night (after a preliminary release of over 90% of counted votes by the election commission), the State broadcaster MCOT published an estimate of total seats which implied that each party could form the centre of a coalition representing 46% of seats, with much smaller parties making up the balance of 8%.

Voting was completed in one day and there was none of the civil disorder which was witnessed in the ultimately voided 2014 election. Five noteworthy differences have thus far characterised this election versus the previous two completed and fully contested elections in 2011 and 2007:

(4) King Vajiralongkorn, in an unusual intervention, issued a message just before polls opened to encourage the election of "good people" (a veiled encouragement to support military-aligned candidates); and

Prayut is a retired general and the Thai leader since the military coup of May 2014; he needs merely 126 out of the 500 (25%) lower house of Parliament (Sapha Phuthaen Ratsadon) seats being contested to become PM. He likely has secured sufficient seats to become PM, but well short of an absolute majority on his own (Phalang Pracharath) and just short with his most closely aligned potential coalition partners (Bhumjaithai and Democrat). The 2017 Constitution was designed to effectively enshrine military supremacy in politics in two ways:

(1) The PM is selected by both the lower and upper house (Wutthisapha), where all 250 members of the upper house are appointed by the military; and

(2) Electoral rule changes which favour smaller parties (e.g. if the 2011 election was run under the new rules the seat count of the Shinawatra-led party in the lower house would have been 45% instead of 53%).

We do not view the election as a catalyst for macroeconomic growth or political reconciliation. An acceleration in growth requires the mobilisation of investment under the "Thailand 4.0" strategy to upgrade infrastructure and skills. This election will likely not bridge the deep political divide in Thailand (between interests broadly aligned to the military-royal-urban south, the "Yellow shirts" and those aligned to the Shinawatras-rural north and north-east, the "Red shirts") and the resultant Parliament may be too fragmented and obstructionist to support the investment needed for growth. See our previously published report - Thailand: Political schism and slow growth. Real GDP growth should average 3.8% over 2019 and 2020, with below 1% inflation, below 1% fiscal deficit and 7.5% current account surplus, according to IMF forecasts.

There is better value and growth for equity investors elsewhere in the smaller Asia emerging markets (e.g. Bangladesh and Vietnam in frontier, or Indonesia and Philippines in emerging, as we argued in this report - South Asia & ASEAN Strategy: Flawed diamonds). Before the market open on 25 March, Thailand equities (Set Index) are up 9% in US$ total return terms ytd, in line with MSCI EM and MSCI Asia ex-Japan. Trailing PB is 1.8x for merely 11% ROE, close to the 5-year median and forward PE is 15x for merely 3% consensus earnings growth.

Thailand stocks which screen well, top-down, on trailing metrics (PB below 1.5x, PE below 15x and DY above 3%) are the following: SCB, BBL, KTB in Banks; PTTEP, TOP, IRPC in Energy, PTTGC in Materials; DIF, JASIF in Telecom; and RATCH in Utilities. Bottom-up, our analysts have Buy ratings on THBEV and CPF in Consumer. 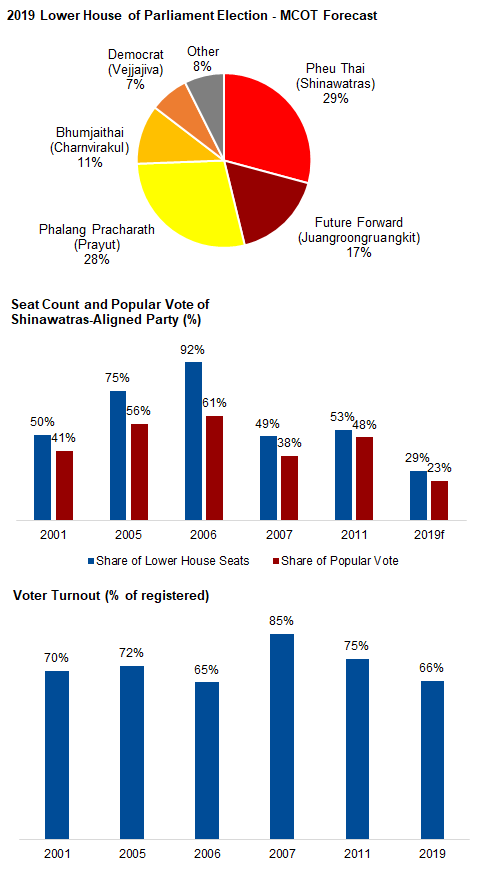 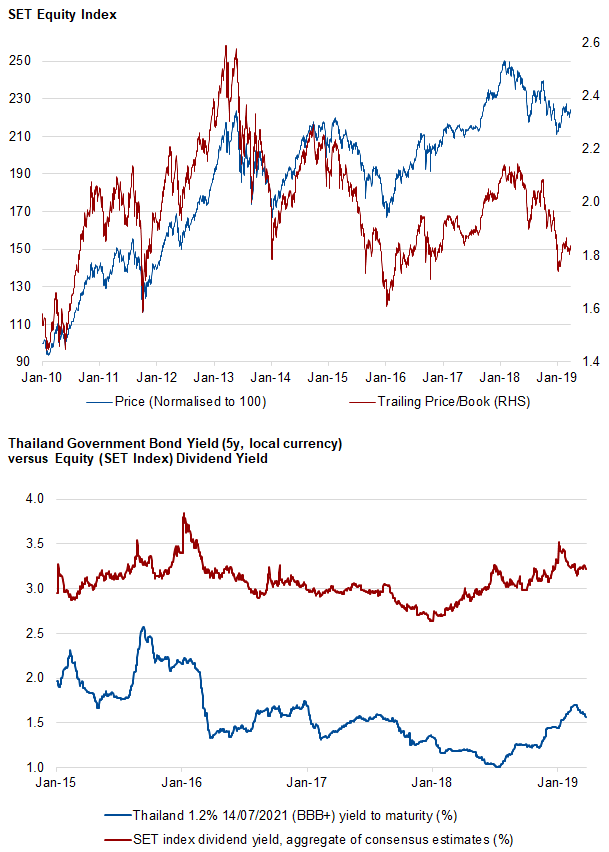