Romania: Ruling party setbacks may be positive for investors

The ruling party, the Social Democrat party (PSD), has suffered three material political blows today: (1) poor performance in the EU elections, (2) the passage of the referendum which better safeguards anti-corruption, and (3) a legal verdict upholding a jail sentence against PSD leader Liviu Dragnea in a long-running corruption case.

Investors should react positively to this given the PSD's recent poor track record on macroeconomic policy (e.g. wider fiscal deficits, ad hoc and populist measures on tax, utility tariffs, poor incentives for foreign oil & gas companies, banks and pension funds, and weaker governance of state-owned firms). Romania equities are still cheap (2019f consensus PB of 1x, PE of 8x, DY of 8%), despite a recent partial recovery (following dilution of draconian policy proposals for the banks), but they would obviously benefit from a transition to a more credible macroeconomic policy environment.

There is no immediate threat to the PSD legislative majority and its government (and PM Viorica Dancila has already refused calls by President Klaus Iohannis, who hails from an opposing National Liberal party, to resign), but today's events confirm that its re-election is in peril (in terms of popular support, internal party leadership and unity – with dissenters to Dragnea already emerging – and stability of its coalition with ALDE, with some of its members bemoaning its guilt by association in the eyes of the electorate). The next presidential election is due in November 2019 (where the selection of a candidate may strain relations between the PSD and ALDE), while the domestic legislative elections (which are much more important in terms of forming the government) are due in December 2020.

Setbacks for the ruling PSD

(1) The performance of the PSD in the EU Parliament elections was poor (23% of votes versus 38% in 2014 and versus its c48% control of lower and upper house seats in the domestic parliament ).

(3) The supreme court has announced a final verdict in Dragnea's corruption case (he has lost his appeal against a jail conviction in July 2018 in a case which has its roots in allegations of use of public funds for party workers when he was head of the Teleorman county council). There may remain a legal route out of this conviction (via an outstanding challenge at the Constitutional Court over the process followed in this case).

The PSD has been negative for investors

Since the 2016 legislative elections, the Social Democrat party (PSD), led by Liviu Dragnea, has been detrimental for foreign portfolio investor interests in Romania because macroeconomic policy has become more ad hoc (via the use of ordinances with little prior public consultation) and more populist (wage increases, tax cuts, utility tariff adjustments), fiscal discipline has eroded (with deficits of c4% of GDP forecast by the IMF over 2019 to 2024, below the EU's 3% threshold). Furthermore, rules for foreign multinationals (e.g. in oil and gas and banking) have become less attractive, pension regulation (e.g. on fees) has deteriorated and governance of state-owned enterprises (e.g. independence of boards and new privatisations) has taken a backwards step.

While the EU elections and the referendum results are likely more of a reaction to the perception of impunity (i.e. insufficient accountability for corruption and the dismantling of institutional safeguards) rather than a reaction to ad hoc populist economic policies (for all the gripes of investors, unemployment is at historic lows), we suspect parties currently in opposition would push for more systematic and investor-friendly policies.

Equities still cheap even after year-to-date outperformance versus EM

Year to date, the FX rate has devalued 4% and Romania equities (measured by the BET Index) are up 9% in US$ total return terms (in line with the plus 8% for MSCI FM, outperforming the plus 3% for MSCI EM). Trailing PB of 1.0x (with 13% ROE) is almost back to parity with the 5-year median. Forward PE is 8.4x (with consensus forecasting a 10% earnings decline).

The largest stocks still screen very attractively on trailing value metrics: TLV and BRD in banks and SNP in oil & gas exhibit trailing PB below 1.3x, PE below 7.5x and DY above 6%. 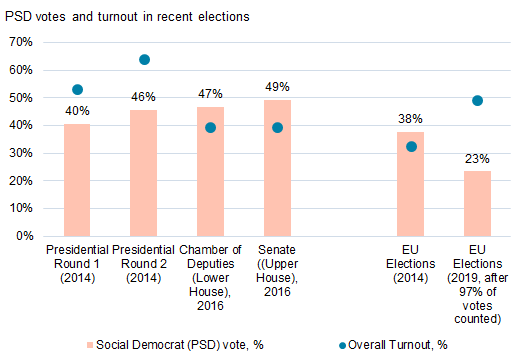 Current composition of Parliament, PSD in coalition with ALDE 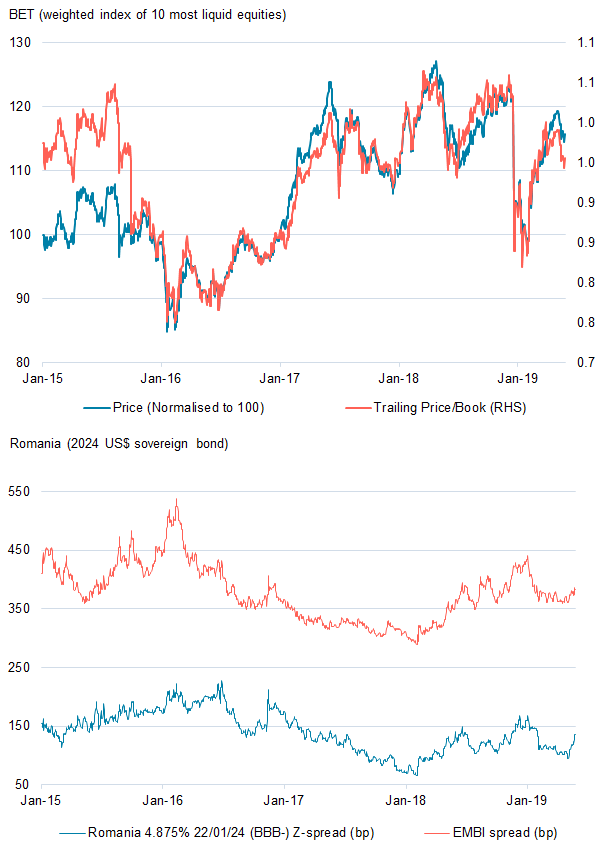 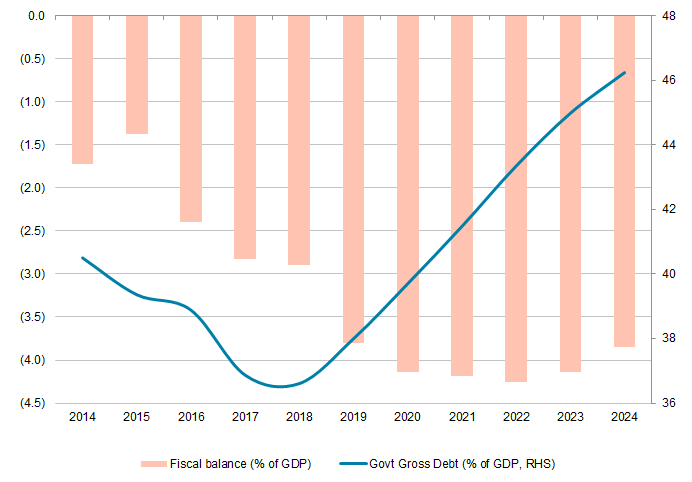