A realignment of political alliances is underway in Kenya and divisions with the ruling Jubilee coalition are increasingly visible. At best, this increases the risk of delays in government decision making at a time when the government needs to drive economic growth (given the persistence of the rate cap until at least March 2020 and the stifling effect it has on private sector credit growth). At worst, it increases the risk of prolonged civic disruption and impairs investment and consumption (although Kenya’s greater institutional strength, e.g. the Supreme Court, compared to, for example, the violent episode of 2007-08, should mitigate this).

In our view, this is yet another top-down risk for Kenya to add to an over-valued FX rate, double-digit twin deficits, slower growth resulting from the rate cap, higher oil price and potentially poor harvest; many of these we have written on before. For those seeking exposure in Kenya, we find the 2028 US$ sovereign bonds more attractive than (local currency) equities.

Political alliances redrawn to counter a Ruto presidency in 2022

Over a year has passed since "the handshake" in March 2018: the public rapprochement which followed the disputed August 2017 Presidential election between two main candidates, President Kenyatta and leader of the formerly united opposition Odinga. This reconciliation appeared to take place independently of their respective coalition partners, Vice President Ruto in Kenyatta's Jubilee coalition (the ruling party) and Wetangulu, Kalonzo and Mudavaidi in Odinga's former National Super Alliance opposition.

The protection of (and appeal to) tribal interests still appears paramount in Kenyan politics. The Kenyatta-Odinga rapprochement was driven, ultimately, by fear of marginalisation in the Kikuyu (Kenyatta) and Luo (Odinga) constituencies under a Kalenjin (Ruto) Presidency from 2022. Under the 2010 Constitution there is a two-term limit on the Presidency and Kenyatta is in his second one. Other motivations were likely also in play but of secondary importance; e.g. the threat to Kikuyu-Kenyatta commercial interests after the post-election threat of an economic boycott and political secession by communities represented by Odinga and his erstwhile allies, the realisation by Odinga that after three failed Presidential bids against Kikuyu incumbents he may need to change course, and pressure from international powers (the US, which regards Kenya as a key ally in the East Africa arena, and China, which has committed substantial investments in Kenya specifically and East Africa more broadly).

The result of all of this is a growing and more visible split within the ruling Jubilee party between those that welcome the reconciliation with Odinga (comprising mainly the Kikuyu component and sometimes labelled the "Kieleweke" camp) and those who fear that Ruto's path to a Presidential bid in 2022 is being obstructed (comprising mainly the Kalenjin component and sometimes labelled as the "Tangatanga" camp).

Examples of this more visible split include the following:

Political divisions in the ruling coalition and a potential divisive referendum risk delays in decision-making related to public project implementation. This matters, particularly at a time when the rate cap continues to throttle private sector credit growth, putting the onus (unusually by Kenyan standards) on the public sector to drive economic growth. And, in turn, potential poor execution by the government is a greater concern given the backdrop of higher oil price and current account pressure, an expensive FX rate and lower FX reserves import cover, slower growth and flattening Nairobi real estate prices.

Political fractures along tribal lines obviously evoke memories of the post-election violence in 2007-08. In our view, this is an unrealistic worst case scenario. Although not always aligned as they are currently, the same protagonists (Kenyatta, Odinga, Ruto) were all key leaders in that period. Presumably there is a consensus to avoid the mass violence of that episode (even if, in the case of Kenyatta and Ruto, for the highly cynical reason of avoiding another case at the International Criminal Court). Furthermore, the role of Kenya's judiciary is stronger having presided over election appeals and passed judgments which were sufficiently respected by the losing party after the 2013 and 2017 elections.

Year to date, the FX rate is flat, equities have outperformed FM and EM, and sovereign US$ bond spreads have narrowed versus EMBI

Equities are up 13% (NSE local index), outperforming MSCI FM and EM (up 8-9%). The index is valued on 10.3x forward PE, with 16% consensus forecast earnings growth, and on trailing PB of 1.7x (15% ROE), a 16% discount to the 5-year median. On an absolute basis, that looks reasonable value but we are put off by risk on the FX rate, which is flat ytd and remains very overvalued versus the real effective exchange rate (over 40% downside). For pan-Africa equity investors, we see more growth at attractive valuations in Egypt and more deep-value in Nigeria. But valuations in KNCB in Banks and EABL in Consumer, on 39% and 21% discounts, respectively, to the 5-year median trailing PE, appear to reflect these risks more fully than EQBNK in Banks and SAFCOM in Telecom, which are on 12% and 8% discounts, respectively.

US$ sovereign 2028 spreads over EMBI narrowed sharply in January, but widened thereafter. We have a Buy rating on the US$ sovereign 2028s (at a mid-basis yield of 7.5% and z-spread of 507bps). Despite the risks mentioned above, continuing high growth, capital inflows and moderate improvements in revenue generation are beginning to stabilise the debt/GDP burden. Furthermore, in our spreads-versus-ratings model, we see attractive relative value in Kenya. This view would be reinforced by an agreement with the IMF for a new precautionary program. 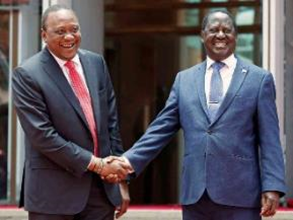 Importance of the Rift Valley in elections 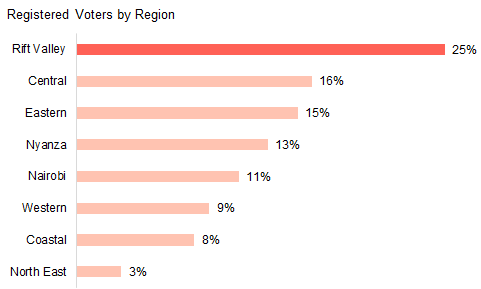 Equities and US$ sovereign bond performance and valuation 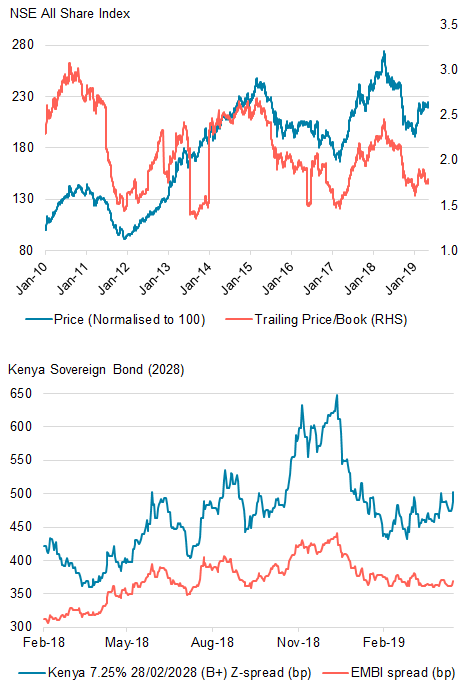