TCZIRA bonds have widened relative to some peers: We are assigning Buy recommendations to the three US$-denominated Ziraat Bank (TCZIRA) senior eurobonds. These securities are still 250-350bp off historic tights and are all quoted below par. Looking at the TCZIRA 2022s, the bond has widened relative to the 2022 senior securities issued by Akbank, Garanti, Isbank and Yapi Kredi. The TCZIRA bond previously traded tighter than both Isbank and Yapi Kredi. Very high swap costs impacted performance in the second quarter, and TCZIRA only generated a single-digit annualised return on equity. In addition, Ziraat Bank remains fully state-owned, and concerns about the impact of this ownership on loan growth may have had a negative impact on bond performance. However, we note that state ownership also meant that Ziraat Bank received a boost to Tier 1 capital in the second quarter, which we see as positive.

Focusing on the positives: Consolidated net income of TRY1.2bn was down almost 50% yoy, reflecting higher swap costs and operating expenses, as well as elevated provisions. The annualised ROE was 8% on our calculations, down from 11% in the previous quarter and 17% a year ago. Positively, capital ratios improved following an AT1 issue, liquidity ratios were higher than in previous periods and the NPL coverage ratio remains above 100%. In addition, core revenue generation remains solid.

Very high swap costs led to qoq decline in revenues: Operating revenue of TRY5.5bn was flat yoy but 12% lower than in the previous quarter. Net interest income rose qoq and yoy, reaching almost TRY6.8bn, as interest income on both loans and securities increased, offsetting higher deposit costs. Core spreads improved in the quarter, driven by the foreign currency business. In TRY, the loan-deposit spread was flat qoq. As at other banks, TCZIRA expects the contribution from CPI linkers to decline, but believes the recent CBRT rate cut will lead to lower funding costs, and improved margins. Net fee and commission income was TRY803mn, down from TRY822mn in the previous quarter but almost 20% higher than a year earlier, driven by credit card and non-cash loan fees. Dividend income fell qoq, as did income from equity-accounted companies. In addition, other operating income was much higher than a year ago, but down qoq reflecting lower provisions reversals. There was a marked rise in swap costs (and volumes) in the quarter. As a result, TCZIRA disclosed a trading loss in excess of TRY3bn. This meant that the non-interest income line was negative and led to the aforementioned qoq decline in operating revenue.

Cost/income ratio was >50%: TCZIRA disclosed operating expenses of over TRY2.8bn, 27% higher than a year ago reflecting higher staff costs as well as increases in depreciation charges, SDIF expenses and other administrative costs. Staff costs also increased qoq, but other administrative costs and other provision expenses fell, leading to a 4% qoq decline in total operating expenses. Despite this, the cost/income ratio rose to 51% from 47% in the previous quarter, as operating revenue was weaker than in Q1 19. 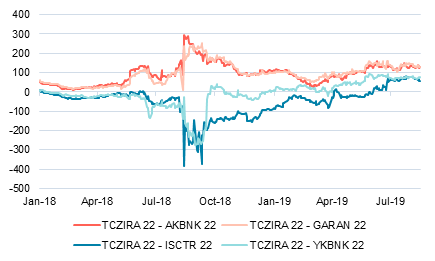