An inevitable demise of the Zim dollar

The demise of the local Zimbabwe dollar, which was introduced in February 2019 following almost a decade of dollarisation (since April 2009), is an inevitable consequence of: 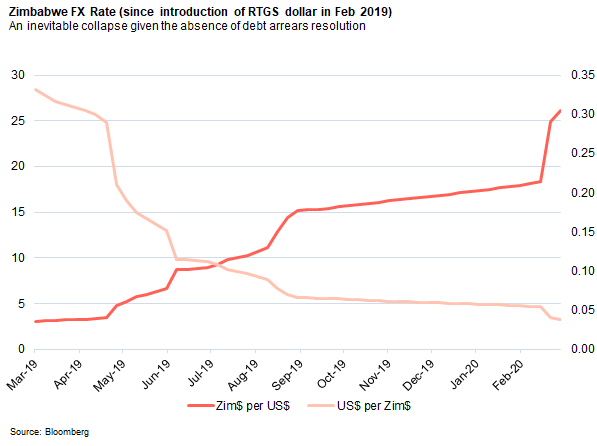 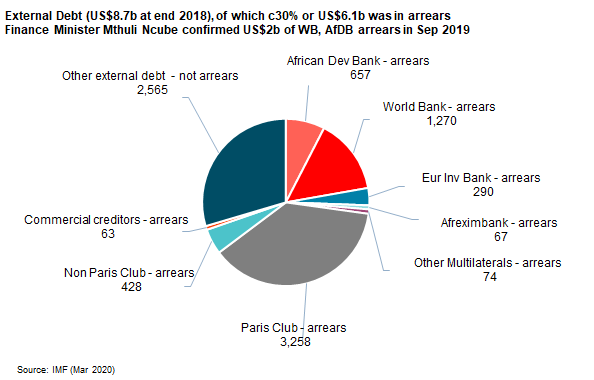 The introduction of the US$ peg has occurred because convertibility of the Zim Dollar could not be supported any longer, not because it resolves any of the underlying problems.

Below is the stark assessment of the IMF, published in the March 2020 Article IV report:

"Re-engagement with the international community continues to face delays. The Zimbabwean government has yet to define the modalities and financing to clear arrears to the World Bank and other multilateral institutions, and to undertake reforms that would facilitate resolution of arrears with bilateral creditors. This continues to constrain Zimbabwe’s access to external official support.

As a result, the authorities face a difficult balance of pursuing tight monetary policy to reduce very high inflation and prudent fiscal policy to address the macroeconomic imbalances and build confidence in the currency, while averting a crisis.

While the 2020 budget includes a significant increase in social spending, it is likely insufficient to meet the pressing social needs. Absent a scaling up of donor support, the risks of a deep humanitarian crisis are high." 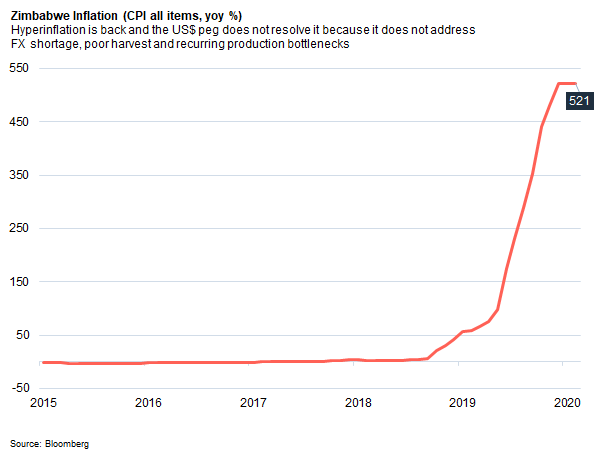 Equities as a proxy for cash (for locals), untouchable for foreigners

The rally in equities in Zimbabwe remains illusory from a foreign investor perspective because repatriation of liquidated positions remains a very big challenge.

For local market participants, however, equities provide an alternative store of value and, even an alternative medium of exchange, to local currency.

This situation is likely to persist until the root cause (debt arrears negotiations) is addressed. 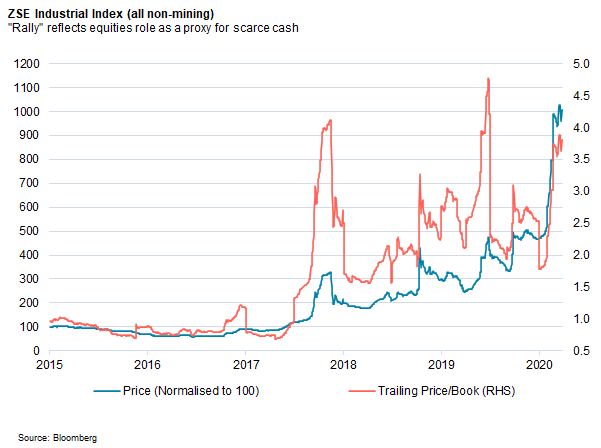 Political repercussions: More of a risk for President Mnangagwa than his deep-state backers

Cynics would suggest that the only achievement of the Zim dollar was to pay government workers for one year (in a currency that has now lost most of its value). The strain on public spending (fiscal cuts were already made in 2019) will likely increase political risk to the government, led by President Mnangagwa.

Whether it poses an increased level of threat to the deep-state of war veterans that sits behind the president and the ZANU-PF party is an entirely different question. In an environment of hard currency shortages and wide parallel market discounts, the quasi-monopolistic control this deep state enjoys can allow it to survive while those outside its circle (ie private sector corporates, the half of the population that is food insecure, opposition political parties, foreign investors with trapped capital) suffer. Three factors are key:

The example of Iran and the role and resilience of the Iranian Revolutionary Guard Corps is a relevant comparable in this context (ie the ability of a deep state to survive despite macroeconomic distress).