Zambia moved one step closer to completing its debt restructuring under the Common Framework, with the official sector creditor committee (co-chaired by China and France) publishing a statement on the Paris Club website on Saturday following a virtual meeting on 18 July, saying that “creditor committee members are committed to negotiate with the Republic of Zambia terms of a restructuring of their claims to be finalised in a Memorandum of Understanding (MoU)”.

This was accompanied on the same day by a statement from IMF Managing Director Kristalina Georgieva welcoming the creditor committee statement. She said “the support from the Official Creditor Committee for Zambia’s envisaged IMF-supported programme, together with its commitment to negotiate debt restructuring terms, accordingly, provides the IMF with official financing assurances” and that “the delivery of these financing assurances will enable the IMF Executive Board to consider approval of a Fund-supported program for Zambia”.

These statements are a major milestone in Zambia’s debt restructuring, which began in November 2020. While a staff-level agreement was reached with the IMF last December, the Fund had been awaiting “financing assurances” from Zambia’s official creditors before granting Board approval. In turn, this had prevented negotiations with Zambia’s private creditors from starting in earnest.

The Paris Club statement emphasised that Zambia will be expected to “seek from all private creditors and other official bilateral creditors debt treatments on terms at least as favourable as those being considered by the creditor committee, in line with the comparability of treatment principle.” This principle was “strongly endorse[d]” by Georgieva as well. However, neither the creditor committee nor the IMF statements provide any clues as to what the treatment will look like.

Now the focus shifts to private bondholders, who will be asked to provide comparable relief in present value (PV) terms. However, there is a risk of further delays as bondholders have thus far waited on the sidelines and will need time to digest the IMF’s Debt Sustainability Analysis (DSA) and associated envelope and terms of relief offered by official creditors, once these details are shared with them.

While we think bondholders have the incentive and desire to play a constructive role in the restructuring and will likely accept a deal that is seen as being sufficient to restore longer-term debt sustainability and shares the costs equitably across stakeholders, some may feel burned by the 2020 Argentina restructuring that failed to restore debt sustainability and has resulted in eurobonds trading in the low 20s just two years later. That said, in contrast to Argentina where the restructuring was pushed through without IMF involvement, the IMF’s presence in Zambia will provide some assurances on this front.

Further, news last week that bondholders had rejected Suriname’s restructuring plans after they had received IMF Board approval for a 3-year programme in December and reached a restructuring agreement with the Paris Club in June shows that, even once these important milestones are achieved, there could still be delays in finalising the terms of the restructuring with private creditors. As reported by Bloomberg, bondholders rejected the government’s offer of a 33% nominal haircut, 7-year average maturity, and 6% average interest rate, instead proposing 20%, 8 years, and 8.75%, respectively. In Suriname's case, differing assessments of Suriname's future repayment capacity were driven by the promise of large but indeterminate future offshore oil receipts. In a similar vein, projections for higher future copper production in Zambia could prompt bondholders to seek some kind of value recovery right (warrants), potentially complicating the process.

Lastly, given the sharp rise in EM yields, calculating “equal treatment” in PV terms could be even more contentious than usual. While the official sector tends to use a rather arbitrary 5% discount rate to calculate the PV reduction, bondholders have typically applied exit yields in the range of 8-12%. However, the yield on Bloomberg EM High Yield Sovereign Aggregate doubled year-over-year to 12.6% by mid-July. While it has since moderated to 11.3%, this still means that exit yield assumptions are likely to be higher than they were in the recent past. This could result in a gap between official and private sector calculations of PV haircuts, leading to inconsistent definitions of “equal treatment” and potentially causing disagreements over the amount of relief required from bondholders.

Until the DSA and official sector restructuring terms are published, it is impossible to say whether the deal will be acceptable to bondholders. For illustrative purposes, the recent restructurings in Argentina and Ecuador included single-digit nominal haircuts and focused instead on providing cashflow relief via hefty coupon cuts and maturity extensions. However, comparatively lower debt burdens (c60% of GDP in Ecuador and c100% of GDP in Argentina pre-restructuring compared to c150% of GDP in Zambia) and the perceived failure of those restructurings to restore debt sustainability mean that nominal haircuts will likely need to be higher in the case of Zambia.

The 20% nominal haircut proposed by bondholders in the ongoing talks with Suriname is consistent with the early remarks by Zambian President Hakainde Hichilema that 20% would be a reasonable starting point for discussions. Zambian bonds have rebounded sharply since mid-July, with the ZAMBIN 8 ½ 04/14/2024s rising from a low of US$47.5 on 15 July to US$60.4 at the time of writing. We upgraded Zambia’s eurobonds to Hold from Sell on 22 July given the extent of the sell-off and signs of progress on the restructuring, saying at the time that the ‘24s would break even with a five-year maturity extension, 50% coupon cut, and 33% nominal haircut at a 12% exit yield or a 25% haircut and 14% exit yield.

Given the rise in prices, the ‘24s are now pricing in a five-year maturity extension, 50% coupon cut, and 18.5% nominal haircut at a 12% exit yield or a 15.5% haircut at a 14% exit yield. While larger nominal haircuts will likely be required, Zambia’s strong current account surplus (22% of GDP in Q1 22, although likely to end the year much lower due to falling copper prices – the IMF estimates a 4.4% surplus on the year) could make a strong argument for less aggressive cashflow relief. On balance, we still think the bonds are pricing a reasonable restructuring, and retain our Hold recommendation across the curve at US$60.4 (42.1% YTM) at the time of writing on Bloomberg for the ZAMBIN 8 ½ 04/14/2024s. 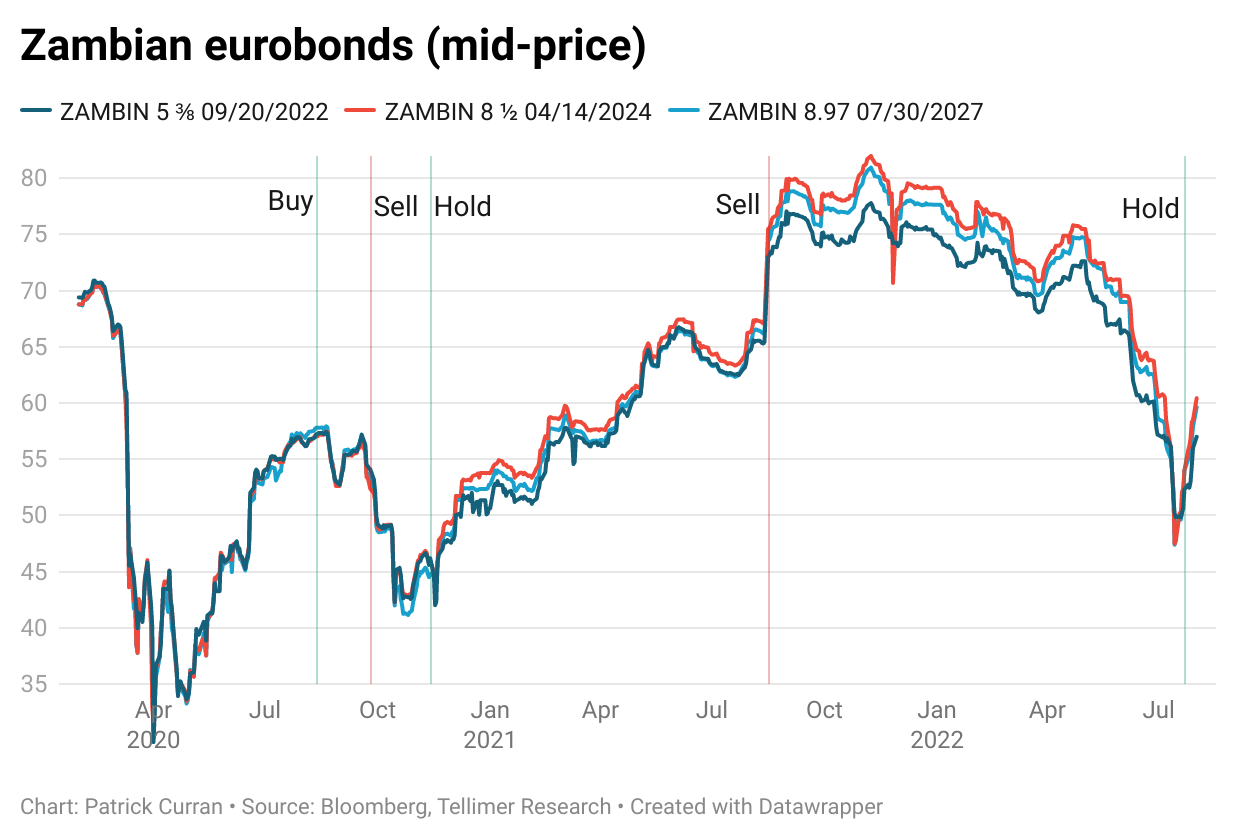 Zambia’s restructuring also has important implications for the G20’s Common Framework for debt restructuring. After a slow start, with just 3 participating countries (Chad, Ethiopia and Zambia) and no restructurings yet completed, the successful completion of Zambia’s restructuring would be a key milestone. Indeed, Georgieva said in her official statement that “This support for the G20 Common Framework demonstrates that international partners are coming together to help countries resolve their debt issues, sending a strong signal to other countries looking to restore debt sustainability.”

With Ethiopia’s official creditor committee finally meeting on 19 July after months of inaction, and the IMF’s mid-June visit laying “the groundwork for starting programme negotiations in the fall”, the recent progress in Zambia could be seen as a bellwether for the revival of Ethiopia’s stalled restructuring process (although the ongoing conflict is a complicating factor).

Most importantly, it shows a renewed willingness by China to participate in a restructuring framework designed and backed by Western multilateral and bilateral lenders, and the G20 (of which China is a member). This also has important implications for countries like Sri Lanka whose restructurings are not subject to the Common Framework, but where China’s cooperation will be a key determinant of the speed and ultimate success of the restructuring.

After a relatively rocky start for restructurings both within and without the Common Framework post-Covid, the swift resolution of Zambia’s restructuring would be a welcome sign that restructuring talks may take a more constructive tone moving forward. Conversely, disagreements between official and private creditors could be a more ominous signal that restructurings will be contentious in the months and years to come, and could prompt the official sector to more aggressively (and/or pre-emptively) press for private sector involvement in countries where debt may not be sustainable.