Zambia: Botched budget a bad signal for bonds; downgrade from Buy to Sell

Finance Minister Ng’andu presented the 2021 budget today (here), with the figures presented all but squashing hopes of IMF relief and a speedy resolution to its debt crisis.

While we don’t yet have the full budget, the speech points to significant fiscal slippage. Through the first eight months of the year, the budget deficit was broadly in line with target, with revenue underperformance of 7.7% nearly offset by spending shortfalls of 27.2% (mainly on externally financed capex).

However, by year-end, total expenditure is expected to exceed the target by 5.6%, suggesting a major reversal of spending cuts in the final four months of the year. While we had previously highlighted (here) that capex cuts would likely keep the deficit within its 5.5% of GDP target this year, it is now expected to reach 11.7% of GDP on a cash basis.

In 2021, the government is targeting a 9.3% of GDP deficit (financed two-thirds externally), with revenue expected to be flat and expenditure expected to increase 6.9%. With elevated 2020-21 deficit targets, it is clear that Zambia does not have the appetite to embark on any meaningful consolidation ahead of the August 2021 elections. In turn, the likelihood of a smooth debt restructuring process or successful IMF negotiations has also diminished greatly.

The composition of the slippage is also worrying. Domestic debt increased 42.5% ytd through August, largely due to spending on agricultural subsidies through the farmer input support program (FISP), which the IMF had previously urged the authorities to wind down. While Ng’andu paid lip service to making them more efficient in 2021, agricultural subsidies are expected to reach 1.7% of GDP.

On the revenue front, there are no significant new tax measures and the government instead touts a slew of administrative measures aimed at improving compliance. It will also provide tax relief for the tourism sector and an increased threshold for PAYE and income taxes to cushion the impact of Covid.

Investor concerns that the government would try to take advantage of the 40% rally in copper prices since March and 16.5% yoy increase in production in H1 to shake down the mines via windfall taxes or royalty hikes will thus be allayed for now. The government’s more business-friendly approach could be related to its ongoing efforts to purchase Glencore’s 73% stake in Mopani Copper Mines and find a strategic investor to improve operations at Konkola.

The debt outlook has deteriorated significantly, with external debt rising from US$11.48bn at end-19 to US$11.97bn in June and domestic debt rising 42.5% through August. Using these figures and our 2020 GDP estimate, and accounting for ZMW depreciation of c32% this year, we estimate central government debt at 108% of GDP versus 82% at the end of last year. Including contingent liabilities and arrears, this number rises to 130% of GDP. 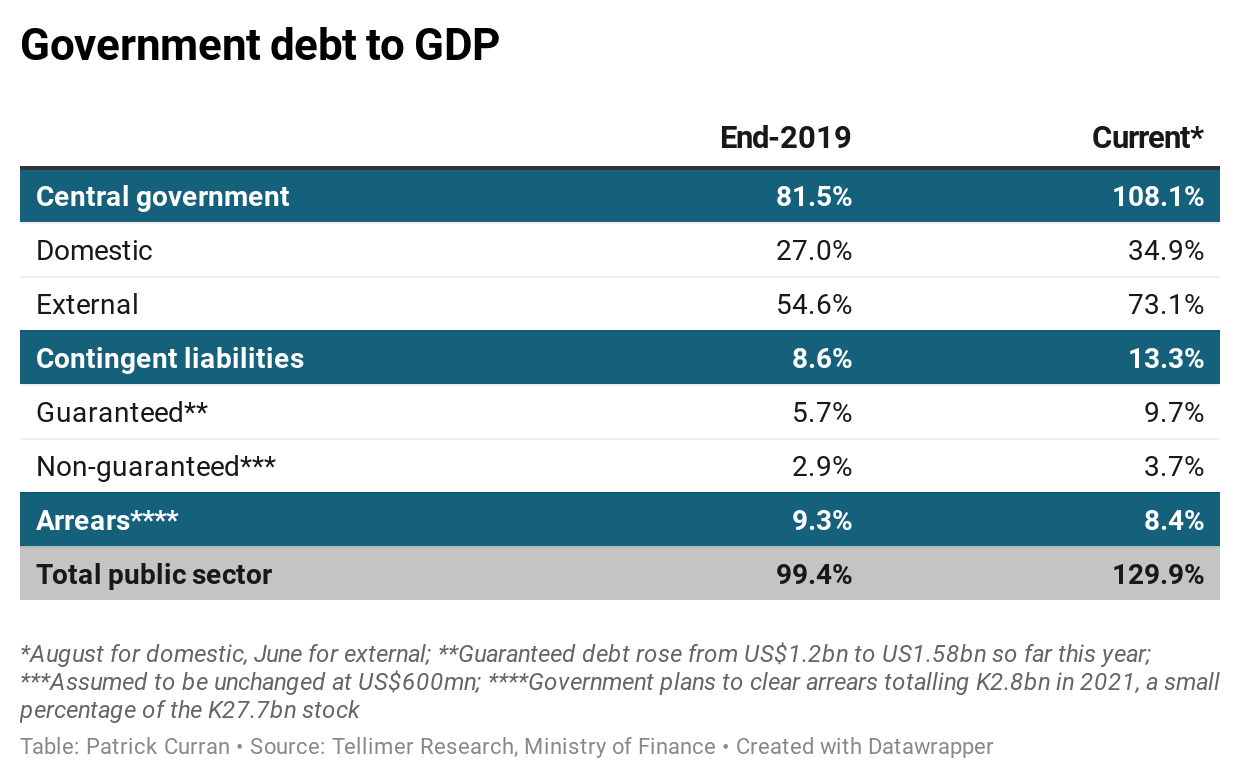 We had previously seen 10-30% nominal haircuts as the likely downside scenario, with cashflow relief likely to do the heavy lifting amid severe liquidity constraints. However, with a much higher starting point, debt must now be consolidated from a higher base, with 35-45% haircuts likely required.

The government's promises to rein in debt also ring hollow, with Ng’andu citing US$1.1bn of cancelled loans and US$280mn saved from re-scoping existing projects. However, this is a small portion of the pipeline of US$9.7bn identified last April (c60% of GDP), and the moratorium on new external borrowing is more likely the result of lost market access than a bona fide commitment to austerity.

The government highlights a domestic interest bill of c5% of GDP in 2021, plus another 7.6% of GDP on external interest and principle (cUS$1.4bn at the current exchange rate, slightly higher than the cUS$1.1bn cited by the World Bank). 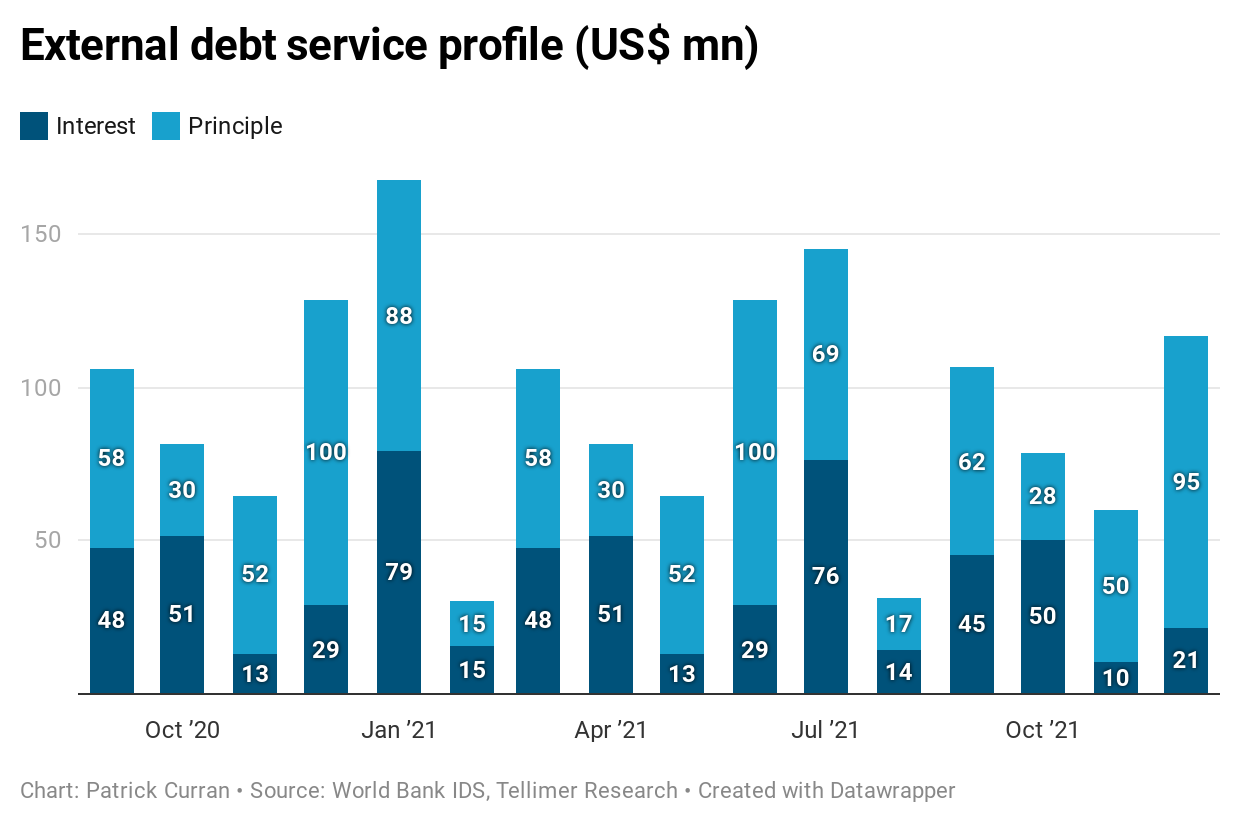 External debt service is thus roughly equal to reserves of US$1.38bn (or 2.3 months of imports, as of July). Despite an improvement of the current account from roughly balanced in H1 19 to a 2.9% of GDP surplus in H1 20 (with exports down 15.8% and imports down 30%), further cashflow relief will clearly be required in 2021.

Restructuring likely to be more severe than initially expected: Downgrade to Sell

The basis of our previous Buy recommendation was that, at c57 cents on the dollar, Zambia 24s were more than accounting for the risk of restructuring (which we thought would entail cashflow relief and haircuts of not more than 30%).

With capex reaching 9.5% of GDP in 2019, there was ample low-hanging fruit to consolidate the budget even in spite of the government’s typical resistance to austerity in pre-election years. We thought that today’s budget would at least be able to fudge the numbers by showing a capex-induced consolidation, thus facilitating IMF and restructuring negotiations.

However, rather than taking the path of least resistance, it appears Lungu will follow the 2016 playbook by again blowing out the budget ahead of elections. With the budget that was tabled today, there is no way to show debt is on a sustainable trajectory. As such, that will preclude any IMF financing, which in turn will lead to fraught restructuring talks that will likely drag out past the August 2021 elections.

Zambia cannot afford another year of muddling through, with debt likely to keep rising amid wide deficits and ZMW depreciation. By the time a restructuring is negotiated, the debt stock will likely be even higher, and therefore greater haircuts and cashflow relief will be required.

We provide several scenarios below, weighted by probability, and arrive at a new target price of 48 cents on the dollar. This is less than our initial target of 61 for the 24s and the current price of c52.5 (down only c1% of the day), with risks now more firmly skewed to the downside. 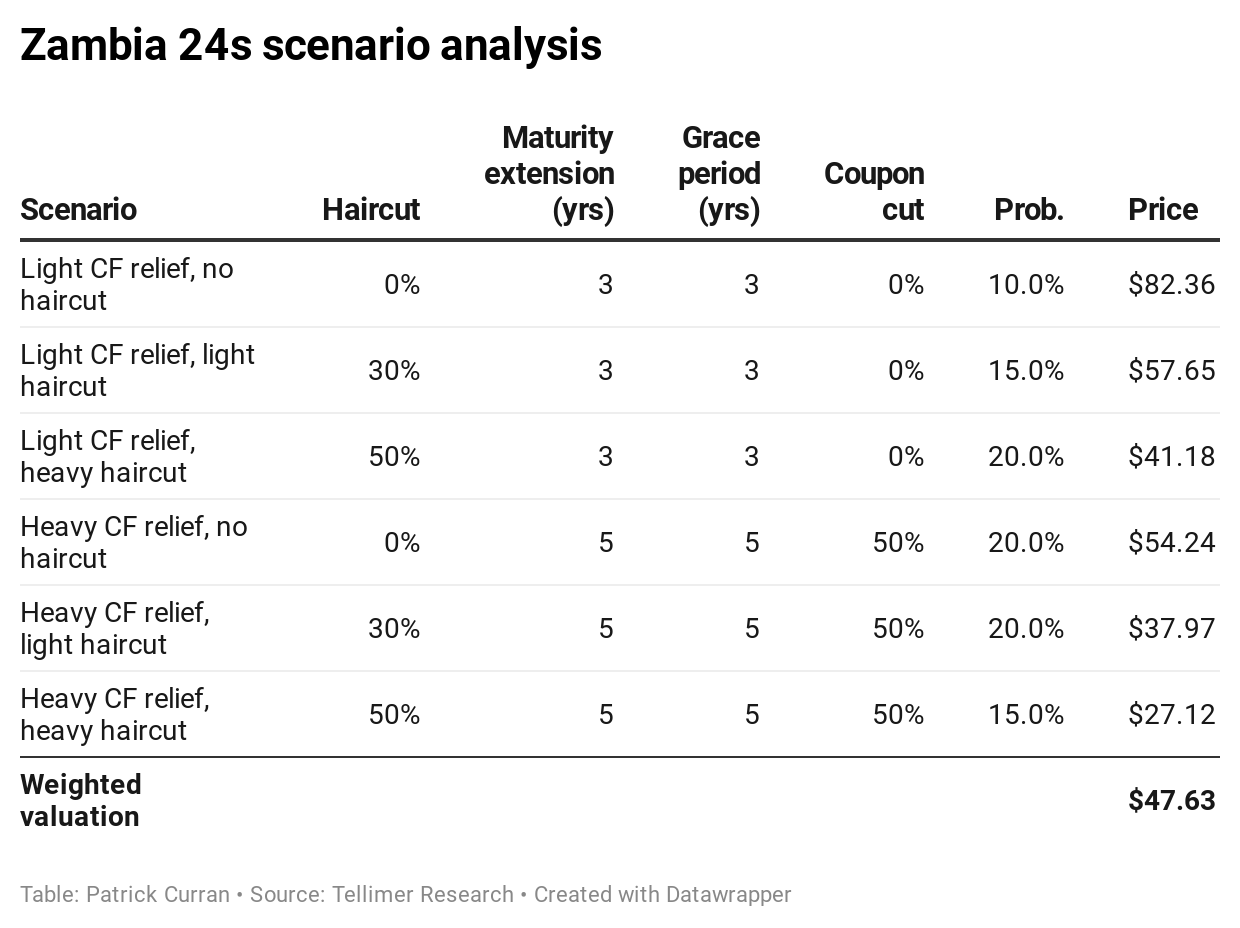 Given the material deterioration in our near-term outlook for Zambia following today’s budget, we downgrade from Buy to Sell.