Stock markets the world over are under pressure this morning, and heavily. There is no respite as risk aversion across the globe ramps up, with the VIX trading at its highest levels in five weeks. 2yr US Treasury yields have risen to the highest levels in three years, the gold price has responded to the more hawkish central banks, and even oil prices have extended their losses, edging back towards the $103pb mark.

The risk always existed that persistent hawkish talk from central banks would eventually weigh on market sentiment, which now appears to be unfolding. Stock and bond markets are now pricing in the inevitable slowdown from ongoing hawkish policy talk. While it may be a case of talking tough to force the markets to adjust and start the process of unwinding stimulus without having to act tough, it is becoming abundantly clear that central bankers are not done yet. Investors are pricing in the possibility that because central banks are behind the curve, they act too forcefully, in too short a space of time and disrupt asset pricing the world over.

This morning, oil prices have continued their slide from Friday as global markets remain in risk-off mode. China reported a record number of new COVID cases over the weekend, which has sent Asian stocks tumbling and weighed heavily on the outlook for demand for crude. The estimated reduction in Chinese demand will be around 1.2mn barrels a day, according to sources within China’s energy industry. As a result, we have the front-month Brent contract trading around $103.75 per barrel, while WTI has fallen below the $100 mark. The declines have seen the Brent contract fall below its 50-DMA, a key support level that held up through last week. With this break, the bears will be eyeing the $100 per barrel handle as the next key support level.

Africa crypto: The Central African Republic has become the second country to adopt Bitcoin as a legal tender, according to reports from Bloomberg. The National Assembly unanimously adopted a bill to adopt the coin as legal tender. The bill establishes a framework for cryptocurrency regulation and for placing Bitcoin as an official currency in the Central African Republic. Issues such as currency illiquidity and excessive levels of volatility have for decades had a significant impact on economies, trade and the ease of doing business. Digital currencies and cryptocurrencies offer a real-world solution to some of the key currency challenges on the continent. One of the main attractions of crypto and digital currencies for central banks is that it simplifies the circulation of money into an economy, whether it be through monetary or fiscal policy. Moreover, digital currencies have extremely fast transfer and transaction times and accomplish the transfer of funds without an intermediary. As such, digital currencies are usually instantaneous and low-cost, especially when compared to traditional payment methods that involve banks and clearinghouses. Moreover, it is worth pointing out that digital-currency-based electronic transactions also bring in the necessary record keeping and transparency in dealings.

Morocco: Headline inflation in Morocco accelerated sharply in March, climbing from 3.6% y/y in February to 5.3% y/y as external price pressures linked to the war in Ukraine pushed up consumer prices. On a monthly basis, inflation rose by 1.8% y/y. Food prices were up 3.8% compared to February and up 9.1% compared to the same period in 2021. Core inflation rose by 0.5% m/m, reaching a yearly average increase of 3.9%. The underlying rise in food prices was primarily triggered by a 13.8% hike in vegetable prices, a 6.2% rise in fish prices, a 5.2% in fruit, a 3.5% in meat, and a 2.1% in dairy products, according to the statistics agency. Looking ahead, inflation risks remain skewed to the upside, with heightened energy and food prices expected to underpin inflation in the months ahead.

Botswana: Botswana is expected to see the release of the 4th Quarter 2021 GDP data this week which has been delayed for almost a month. Equally important is the next sitting of the Bank of Botswana who will decide on interest rates on the 28th April. So far, the bank has been steadfast in its approach of steady as she goes, resisting the call to raise rates instead focusing on the fact that it views the current inflation episode as transitory. The bank has chosen to prioritise the repair of the economy by allowing negative real interest rates to persist, granted this does not encourage savings, but this may not be the goal for the BoB at the moment.

Nigeria: News headlines in Nigeria are focussed on the devastating blast at an illegal refining depot on the border of Nigeria's Rivers and Imo states. Reuters reported that the explosion had killed more than 100 people. Nigerian President Muhammadu Buhari said in a statement that he would intensify the clampdown on illegal refineries after what he described as a "catastrophe" and "national disaster".Government officials estimate that Nigeria, Africa's biggest oil producer and exporter, loses an average of 200,000 barrels of oil per day, more than 10% of production, to illegal tapping or vandalising of pipelines.

Zimbabwe: Zimbabwe’s central bank said it has “no reason or appetite to raid” foreign-exchange accounts and denied allegations from the country’s largest industry lobby group of US dollars being raided and a bank run. The Confederation of Zimbabwe Industries said in a report published on Friday that it has asked the central bank to dump its weekly foreign currency auction and also highlighted the growing use of US dollars in most transactions, which undermines the use of the Zimbabwean dollar. Reserve Bank of Zimbabwe Governor John Mangudya said that the central bank won’t suspend the weekly foreign currency auction as requested by the lobby group as this will lead to a shortage of goods and stoke inflation.

Continuing on from Friday’s currency comment, the South African Rand extended its losing streak in the final session of last week, bringing the ZAR’s losses for the week to 6.72% against the USD. The sharp sell-off in the rand has bolstered interest expectations and interest rate hike bets. Looking at the forward rate agreement (FRA) market, which we use as a proxy for how much rate hike risk is being priced in by the professional market, rate hike expectations increased last week with the market pricing in more than 25bps worth of rate hikes for every MPC meeting through to 2023. 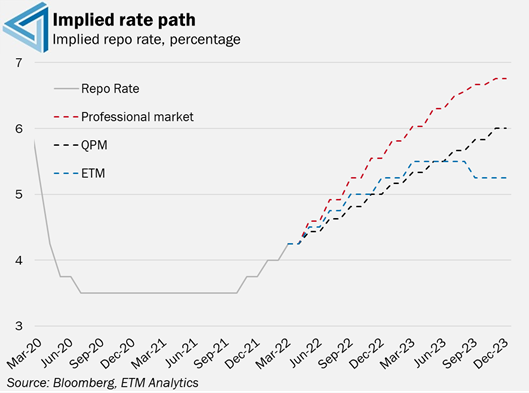 The weaker ZAR comes on the back of elevated international commodity prices, which have amplified inflation expectations. While inflation risks have intensified, ETM's proprietary indicators suggest that while headline inflation could threaten the upper limit of the SARB's 3-6% inflation target range in the near term, inflation is expected to moderate later this year as supply chain pressures ease and high base effects kick in.

It is always useful to calibrate expectations by assessing the SARB's Quarterly Projection Model (QPM) vs what the market anticipates and then overlay in-house expectations. The QPM has been relatively stable in recent quarters and has continued to target a repo rate rising back up to the 6% mark. This forecast assumes an inflation rate that remains buoyant and a SARB that seeks to lift interest rates back to a neutral level.

In the short-term, the risk to the SARB's expectations rests with the SARB doing more to contain inflation expectations in the face of a commodity and energy price shock while also wanting to keep pace with the tightening of the Fed. Longer-term, the risk is that the SARB is overestimating the pass-through into inflation. Historically, one of the criticisms of the QPM is that it has not been sensitive enough to the weakness of the credit cycle, which would curtail the degree to which interest rates might need to rise. ETM's repo rate expectations reflect this.

S&P said that the stable outlook reflects its expectation that the Egyptian authorities' policy response, alongside significant external support, should prevent a material deterioration in external and fiscal positions due to rising commodity prices. The agency said that higher commodity prices are likely to increase Egypt's fiscal and external deficits and financing pressures on the country. 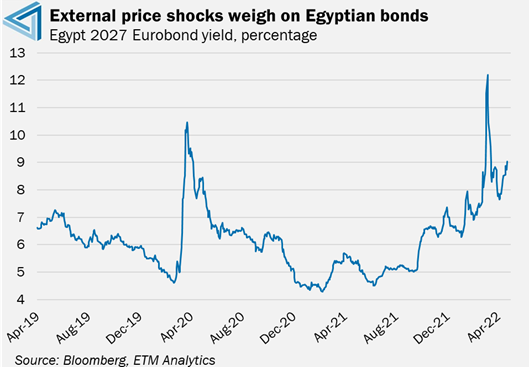 The agency noted that financing conditions for emerging market economies are worsening as global monetary conditions tightened. However, it expects that the government will manage the current situation by maintaining its medium-term commitment to fiscal consolidation, using exchange rate and interest rate policy to manage economic adjustments alongside external funding support from multi- and bi-lateral parties.

While S&P left Egypt’s credit rating and outlook on hold, risks of negative rating action do exist. The agency said that it could lower Egypt’s credit rating over the next 12 months if the negative effects of higher commodity prices on Egypt's external position are more severe or prolonged than expected, resulting in a substantial decline in foreign exchange reserves and reduced ability to service debt and interest payments.

However, S&P said it could consider a positive rating action over the medium-term if Egypt's economic expansion significantly outperforms its forecasts and if the reform program materially narrows government and external financing needs, reducing debt and indicating a track record of strong governance.

Zambian bulls can take a deep breath following reports that China is willing to participate in the effort to restructure Zambia’s foreign debt. Chinese officials told the International Monetary Fund and World Bank that it would join the Zambia creditor committee, according to IMF Managing Director Kristalina Georgieva.

This is a massive step forward in the restructuring process for Zambia’s estimated $17.3bn foreign debt, which is one of the key hurdles standing in the way of Zambia securing a program with the IMF. China was reportedly the only creditor stalling the much-needed debt restructuring process. 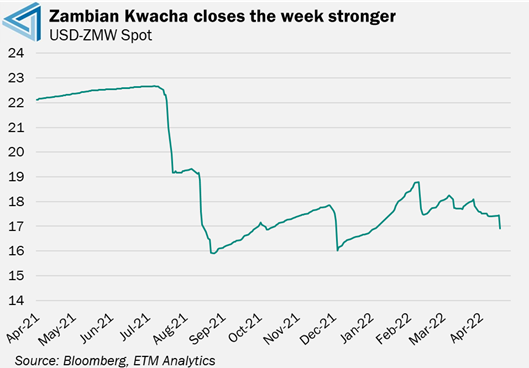 Commenting on the matter,  IMF Managing Director Georgieva said, “We were very pleased to hear from Governor Yi Gang... a very specific commitment to join the creditor committee on Zambia and work expeditiously for debt resolution.” Georgieva added that China also committed to the Common Framework debt restructuring process.

With China now willing to participate in the debt restructuring, it is looking highly likely that Zambia will conclude its deal with the IMF within the next few months. In December, Zambia reached a staff-level agreement for a $1.4bn IMF bailout, including a debt sustainability analysis that will form the basis of talks between the country and its creditors. Optimism surrounding the debt restructuring and the IMF deal has provided a boost to the Zambian Kwacha.