In the currency market, yesterday, Boston Fed President Rosengren undid some of the damage to the USD that was done by the consumer confidence data last Friday by stating that one more month of strong job growth could prompt the Fed to start tapering as early as September. Recall that tapering in itself is not tightening. It amounts to pressing less hard on the accelerator and given the underlying strength to the US economy, the taper could indeed be justified. This has helped to stabilise the USD, which will also benefit from a rise in global geopolitical tensions as developments in Afghanistan continue to unfold in a concerning and destabilising way.

Shifting the focus to commodities, copper fell overnight with the benchmark 3m LME contract shedding 1.35% on the session to close at $9442.00/tonne. This morning we have noted some bargain hunting in the Asian session given the sharp fall yesterday and we have the red metal up just short of 0.5% on the day at $9488.50/tonne into the EU open. The market is heavily headline driven at the moment and short term tactical traders will be finding the current price action testing given the level of volatility. The big news this morning is Bloomberg reporting on the halting of the operations at Alashankou land port in Xinjiang after confirming three coronavirus cases, researcher Shanghai Metals Market said, without saying where it got the information.

Egypt: In what could be the country’s biggest-ever initial public offering, Egypt plans to take the first steps early next year towards selling a stake in the state company behind its new capital city. Company Head Ahmed Zaki Abdeen said that the Administrative Capital for Urban Development, a joint venture between the military and the Housing Ministry created to oversee the multi-billion dollar project, has “very very big assets and a big portfolio of land and projects.” Abdeen added that “we are in the planning stage now and can start the procedures of choosing advisers and deciding the size of the offering early next year.” Finally, Abdeen added that the offering is expected to take place on the Egyptian exchange and potentially another international market.

Kenya: M3 money supply slowed further in June, coming in at a 17-month low of 6.30% y/y from 7.64% y/y. Note that money supply has been on a downward trend since December 2020, which suggests that monetary dynamics continue to tighten. Therefore the room for inflation to take hold is compressing and is unlikely to spiral out of control in the months ahead.

Kenya: Data from the central bank of Kenya (CBK) showed that foreign currency holdings fell to a 7-month low last week. Specifically, foreign reserves declined to $9.296bn on August 12 from $9.352bn on August 5. According to the CBK, the forex reserves are adequate to cover 5.68 months of imports, down from 5.72 months. While the import cover is down, it remains above the CBK’s target of at least four months and the EAC region’s convergence criteria of 4.5 months import cover.

Nigeria: President Muhammadu Buhari yesterday signed into law long-awaited legislation to overhaul the oil and gas sector. The signing of the Petroleum Industry Bills comes a month after it was voted through by both chambers of the National Assembly. The bill was first presented to parliament in 2008 and is aimed at removing legal and regulatory uncertainty that’s held back the sector’s growth. The Buhari administration is banking that the reforms will attract a greater share of global capital allocated to fossil fuel projects.

Nigeria: To obtain money to lend to companies affected by the coronavirus pandemic, Nigeria’s state-owned Industry Bank is set to raise as much as EUR 750mn from international debt markets this year. According to CEO Olukayode Pitan, the lender will raise “anywhere between EUR 500mn to EUR 750mn.” Pitan added that the bond proceeds will be deployed to priority areas, including healthcare, transportation, education, solid minerals, and agriculture. The bond sales will boost reserves and increase funding for companies whose businesses have been impacted by the country’s two recent economic contractions in 2016 and 2020.

Zambia: President Edgar Lungu on Monday conceded defeat in the 2021 presidential elections to opposition leader Hakainde Hichilema. In a televised address to the nation, Lungu said he would comply with the constitutional provisions for a peaceful transition of power and congratulated Hichilema. The comments from Lungu marked a U-turn from his protests on Sunday that the election had not been free and fair. With Hichilema being declared the winner and Lungu accepting defeat, this would mark the third time that power has shifted peacefully from a ruling party to the opposition since the country’s independence from Britain in 1964.

Speculators upped their ZAR net long positions marginally during the week ending 10 August. The ZAR’s net position inched higher to $0.15bn from $0.13bn the week prior, however, this is still below the recent peak of $0.26bn seen in late June. The increase last week in net longs was a result of a combination of lower gross short bets and an increase in gross longs. The ZAR, however, remains below its EM peers, the RUB and BRL, in terms of outright bullishness. 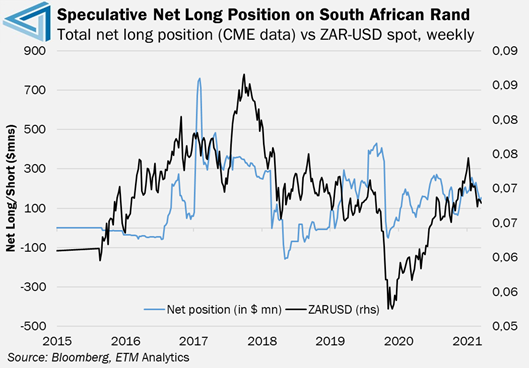 In terms of other major market moves, the USD net long position continued to increase, while EUR net longs were reduced to their lowest since March last year. The Sterling net position, however, climbed back into net long territory following the BoE rate announcements in early August.

The build in ZAR net longs came despite some ZAR weakness during the period, suggesting that the correlation between the two remains low and that the CFTC data’s predictive powers for the ZAR are still relatively weak at the moment.

Undoubtedly the most significant move in the African Eurobond market yesterday was in Zambia. Yields across Zambia’s Eurobond curve nose-dived on Monday after an official statement released early in the morning revealed that opposition leader Hakainde Hichilema had successfully won the election with nearly 60% of all votes going his way. This landed Hichilema a majority in parliament, which will give the new President a strong mandate to implement structural reforms needed to revive Zambia’s crippled economy. 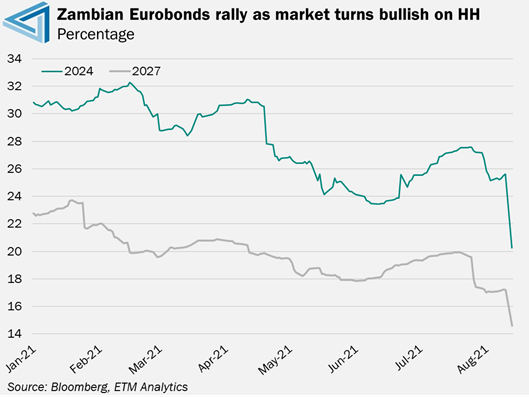 The bullish bias in Zambian Eurobonds this year is attributed to three main factors, namely hopes of an International Monetary Fund deal, elevated international copper prices, and hopes that the Hichilema administration will implement much needed structural reforms that will revive the economy and put the country on a more sustainable debt trajectory.

Although the market has turned decisively bullish on Zambian debt, we caution investors not to turn overly bullish on Zambia just yet. We need to see concrete evidence that the new administration is indeed committed to rolling out structural reforms while at the same time securing a program with the International Monetary Fund. If the new government is able to do this, we still expect it to take years for the economy to recover from the damage caused in recent years.

The latest data published by Bloomberg on Monday showed that withdrawals from funds that invest in emerging market stock and bond ETFs came in at $345.4mn last week, compared with an inflow of $189.7mn in the previous week. Note that this marked the second weekly outflow in just over a month and the largest withdrawal in 11 months.