Jobs data released last week strengthened the argument for an economic recovery. The private sector ADP, weekly jobless claims and the payrolls figures all alluded to a solid recovery in the labour market, albeit that a stronger recovery had been priced in. Econometric models have not been very good in gauging the recovery thus far and once again overestimated the propensity for the payrolls numbers to jump. However, that should not detract from the anticipated jump that will occur in H2 2021 when unemployment cheques cease, and households are forced to look for employment. Demand for employment appears to be reasonably strong, and therefore, any under-performance in the data currently is likely to be replaced by a stronger showing later this year. The USD responded negatively to the softer than expected payroll data, but that has just as much to do with economic policy and how it has exacerbated the twin deficits.

After showing some early signs of staging a solid recovery, the USD's fragility shone through on Friday following the weaker than expected non-farm payrolls figures. Investors had anticipated more, and what they got instead was a sign that the economic recovery was proceeding slower than expected. This has given rise to speculation that the Fed will persist with its ultra-accommodative monetary policy stance for longer than first thought, which will promote the twin deficits that undermined the USD through the past year. Looking ahead, until the data starts to place the Fed under pressure to consider tapering, the underlying boost to the USD will be substantially less.

Uganda: Data published by the Bank of Uganda showed that monetary dynamics in Uganda continued to tighten in April. Money supply growth decelerated for the third straight month from a downwardly revised 15.50% y/y in March to 11.64% y/y in April, its slowest pace of growth since July 2019. Meanwhile, private sector credit growth fell notably in April, coming in at 6.96% y/y compared with 9.67% y/y in March. This marked the lowest level of credit growth in eight months. The tightening monetary environment will help keep headline inflation contained. Thus, providing support for the Bank of Uganda to maintain its accommodative policy stance to support the economic recovery.

Ethiopia: The Ethiopian Council of Ministers approved an ETB 561.7bn ($13bn) draft budget for the coming fiscal year, which begins in July. The recently approved budget is an 18% increase on the ETB 476bn announced in June last year as reforms including privatisation and improved revenue collection took shape. Prime Minister Abiy Ahmed posted on his Twitter account justifying the draft budget increase saying that “due attention is given to enhancing our production capacity in line with the 10-year perspective plan, laying the foundation for Ethiopia’s inevitable prosperity.”

Tanzania: In her latest step to seek inoculation for Tanzania, President Samia Suluhu Hassan directed the health ministry to submit to the cabinet guidelines on procurement and funding of COVID-19 vaccines. This marks a complete turnaround by the Tanzanian government in dealing with the global pandemic from former President John Magufuli, who warned against using vaccines before his passing in March. To help quicken the country's pace of vaccination, President Hassan also allowed foreign embassies and international organisations to import vaccines to inoculate their employees.

Ghana: A local newspaper reported that Ghana’s daily minimum wage was raised by 6% for 2021 and then 8% for 2022. The national tripartite committee was quoted saying that "the country’s daily minimum wage will increase to GHS 12.53 from Friday and then GHS 13.53 per day from January 2022." The increase in the minimum wages is likely to raise the government’s wage bill and bring about inflation pressures in the months ahead.

Zimbabwe: The government of Zimbabwe is mulling to continue clamping on companies that are benefiting from speculating on the currency. In its latest move, the government is threatening to ban traders from the country’s foreign exchange auction platform for exploiting the gap between the black market and official currency prices. Deputy Finance Minister Clemence Chiduwa said that the “auction system is subject to rampant abuse, and the government is seeking to minimise arbitrage opportunities, protect consumers and provide a level playing field for businesses.” This move is expected to help narrow the gap between the official and parallel market rate, which has widened to as much as Z$130/USD.

Notwithstanding the recent devaluation by the Central Bank of Nigeria to the naira (NGN), the banning of foreign currency to some importers and incentivising efforts to capture remittances by the Central Bank of Nigeria, the gap between the black market and the official market exchange rate continues to widen. To try to reduce this gap, the central bank has devalued the currency three times since March last year. However, these efforts have not been fruitful, and people continue to rely on the parallel market to meet their dollar demand.

According to a website that collates the street rate in Lagos, the NGN traded at its lowest level against the US dollar since February 2017. For context, on Friday, the NGN traded at NGN 502/USD, further widening the spread from the N410.83/USD on the investors and exporters window, Nafex. The sell-off of the naira on the black market was fueled by the spike in dollar demand for summer travel and school fees payments.

It is worth noting that closing this gap will not be an easy task for the central bank. Dollar demand is expected to continue increasing as the global economy opens up further and domestic economic activity rebounds from the coronavirus pandemic. With Nigeria facing a dollar liquidity shortage following last year’s plunge in crude oil prices and still depressed foreign reserves, the parallel and official gap is likely to remain entrenched as people resort to the black market to fulfil their demand.

While still amongst the highest in the world, Zambia’s local currency and hard currency bond yields have fallen in recent days as the combination of elevated international copper prices and expectations for a deal with the International Monetary Fund attract investors. The recovery in appetite for Zambian debt comes despite the Zambian government showing no near-term prospect of resolving a default on its Eurobonds.

Yields fell across maturities for the first time in a year at a June 3 Treasury bill auction, according to Bloomberg. It is worth highlighting that the recovery in demand for Zambian bills comes even as only the 12-month note has a yield higher than headline inflation of 23.2%. Yields further out on the curve have also traded lower, with the 10-year bond yield, for instance, falling to 31.0% at the May 28 auction from the 34.5% that investors had demanded in the previous four months. 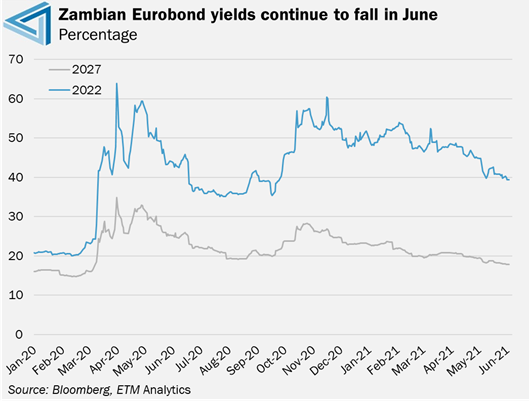 As pointed out in a note last week, yields in the secondary market have also trended lower in recent weeks, driven down by optimism surrounding and IMF deal and soaring copper prices, which will help bolster government revenue and boost hard currency inflows into the country. Recall that Zambia relies on copper for more than three quarters of its export earnings and a large portion of government revenue. On balance, while Zambian bond yields across the board have traded lower, it is worth noting that investors continue to demand a significant premium for holding Zambian debt given the precarious fiscal position that the country finds itself in. Going forward, although we do see scope for a further decline in Zambian bond yields, we expect a significant fiscal premium to remain baked in.

Macroeconomic: Economic activity in Kenya rebounds in May as restrictions are eased

Markit PMI data released on Friday revealed that activity in Kenya’s private sector rebounded markedly in May as virus containment measures were eased. After falling sharply below the 50.0 neutral mark in April, Kenya’s headline PMI reading swung back into expansionary territory in May, climbing from 41.5 to 52.5, its highest level in four months. 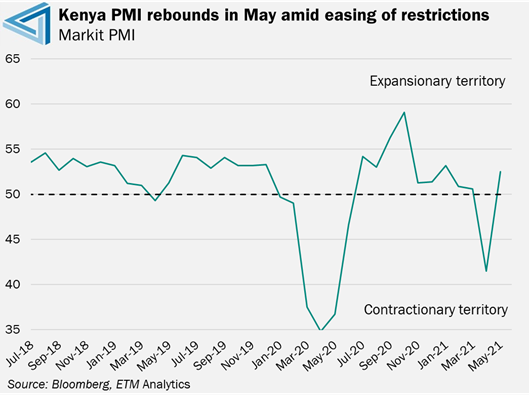 Markit said in the report that four sub-indices of the PMI rose above the 50.0 mark in May, namely output, new orders, employment and stocks of purchases. Output grew markedly in May with firms citing an easing of curfew hours and travel restrictions between counties. Markit added that the loosening of restrictions also supported a rise in new orders. Firms noted that there was a significant increase in exports on the back of improved external demand.

Encouragingly, job creation returned in May as businesses increased hiring due to higher workloads. On the pricing front, increased raw material and transport costs resulted in a further squeezing of profit margins. Specifically, while some businesses recorded higher charges in May, the overall rate of output charge inflation remained slower than that of input prices. Looking ahead, businesses remain optimistic over the outlook for the economy as COVID-19 cases continue to fall and vaccinations continue to rise. Finally, it is worth noting that Kenya is expected to stage the strongest economic recovery in East Africa, with the International Monetary Fund pencilling in GDP growth of 6.3% for 2021.