The mighty USD looks poised to record a third weekly gain after the stronger than expected CPI print on Wednesday drove markets to reprice interest rate bets higher. Hawkish Fed comments have added to the bullish momentum with Fed talk this week suggesting that we will see another 75bps rate hike this month with the possibility of an outsized 100bps hike. The widening monetary differential between the US and other major economies has seen the G10 currency complex come under significant selling pressure this week, with the EUR, GBP and JPY all down by more than 1.50% on the week against the USD. With the exception of the RUB, emerging market currencies have also sold off this week. Heading into the final session of the week, we have the USD consolidating after a strong rally in recent days. That said, there are a number of important data releases out of the US today which have the potential to spur some fresh price action in the USD.

US Treasury curve inversion continued to deepen at one point yesterday, which saw other key sectors of the curve, such as the 5v30 spread, turn negative. This was then walked back towards the end of the session as Fed speakers looked to ease rate hike fears. Both Governors Waller and Bullard said yesterday that a 75bp rate hike was appropriate, leading to a widening of spreads as some near-term rate hike risk was priced out after comments from earlier this week that pointed to a possible 100bp rate hike. Even so, the yield curve remains inverted through the 2yr to 10yr sectors and we could still see this deepen further as economic data starts to weaken while inflation pressures remain buoyant.

Mozambique: In a boost for Mozambique, the World Bank has approved a $300mn grant for the country's reforms. According to the lender, the grant will help lay the foundations for sustained growth and economic transformation. Moreover, the grant will support the country's recovery from the coronavirus pandemic while providing financing to alleviate recent fiscal constraints. Reforms in Mozambique include strengthening budgetary institutions and transparency, private sector development, and climate-change commitments to support a more resilient and greener growth path.

Namibia: Headline inflation in Namibia surged to a five-year high in June, coming in at 6.0% y/y from 5.4% y/y in the month prior. Food, non-alcoholic beverages, and transport costs underpinned the acceleration in inflation in June, with the former jumping 7.0% y/y, its highest rate in a year. With inflation in June reaching the upper end of the central bank's 3-6% target range for the first time since June 2017 and risks tilted to the upside amid still elevated food and oil prices, we are likely to see Namibia's central bank hike its policy rate once again at the next meeting.

Kenya: Yesterday, President Uhuru Kenyatta approved an additional fuel subsidy of KES16.7bn ($141mn) to cushion consumers from a further increase in fuel prices. This means that diesel will continue to retail at KES140 per litre for the next month, gasoline at KES159.12, and kerosene at KES127.94. Without the intervention, diesel would have jumped 38%, gasoline would have risen 32%, and kerosene which many Kenyans use for lighting and cooking, would have gone up by almost 42%, according to the presidency. To date, Kenya has spent KES101.852bn on the subsidy, which has ensured that fuel prices remain the most affordable in the East and Central Africa regions. However, the subsidy appears to be a reversal in Kenya's stance after National Treasury last month said it would halt the subsidies in the fiscal year that began July 1, as the spending was likely to inflate public debt to unsustainable levels and disrupt plans to ease the burden of liabilities.

Zambia: Reports quoting a source familiar with the matter indicate that the G-20 is moving toward backing the formation of a Zambian creditors' committee under its program to coordinate the restructuring of the country's debt. G-20 finance ministers reportedly see the creation of a credit committee as a first step to addressing Zambia's debt vulnerabilities in a coordinated manner. Zambia's creditors are set to meet for a second time next week Monday, according to FinMin Situmbeko Musokotwane. Zambia is seeking debt relief on more than $17bn in external debt, and financing assurances from creditors will allow the country to finalise a $1.4bn program from the IMF.

South Africa: Mining production figures came in better than expected, with an improved m/m figure of 0.7% in May compared to a revised figure of -3.6% in April. Year-on-year production contracted by 7.8% in May compared to the 14.8% drop seen in the previous month. Key declines that led to the weaker y/y output were gold (-28.3%), coal (-7.3%), and manganese ore (-14.5%), while platinum production improved to partially offset this. The reduction in production is likely a result of power disruptions, which have worsened since June and will remain a major drag on the sector. Therefore, the outlook for the sector is unlikely to improve until new investments are made into the sector and structural headwinds decline. Beyond just growth concerns, a weaker mining sector impacts South Africa's trade balance, taking away a key pillar of support for the local currency.

The Trade-weighted USD Index (DXY Index) closed at a multi-decade high yesterday amid rising interest rate hike bets. Robust inflation data on Wednesday drove expectations for more monetary policy tightening, while safe-haven flows amid growing fears of a recession also underpinned dollar strength. Ahead of the Federal Reserve meeting later this month, speculation is growing that the central bank could raise its benchmark rate by as much as one percentage point to rein in consumer price pressures. 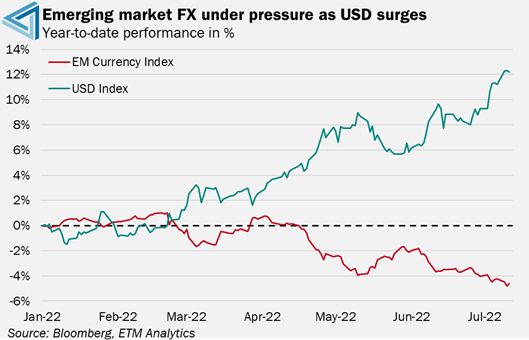 EM currencies, therefore, broadly traded on the back foot yesterday, with 18 out of the 23 currencies tracked by Bloomberg recording losses against the dollar. With the dollar up by around 13% year-to-date, EM and frontier market currencies have come under significant selling pressure this year. For context, the MSCI EM FX index, which we use as a proxy for EM currencies, has lost close to 5% on a year-to-date basis.

As global financial conditions continue to tighten and the dollar remains supported, headwinds for EM and frontier market currencies will persist, especially for those with weak fundamentals, as risks of capital outflows will heighten further. With the stronger dollar also weighing on commodity prices, we could see currencies in the Africa FX complex, which had previously benefited from high international commodity prices, lose some resilience.

While bonds curves across the world have bear flattened over the past year, as central banks turned hawkish to combat soaring inflation, the Zambian bond yield curve has bull steepened. The steepening bull interest has been driven by a significant repricing in shorter-dated debt instruments following the election of the new government in August last year, which boosted investor sentiment amid signs that the new administration would implement debt consolidation and growth supportive reforms. Add to this optimism that the country will secure a much-needed financing deal with the IMF. 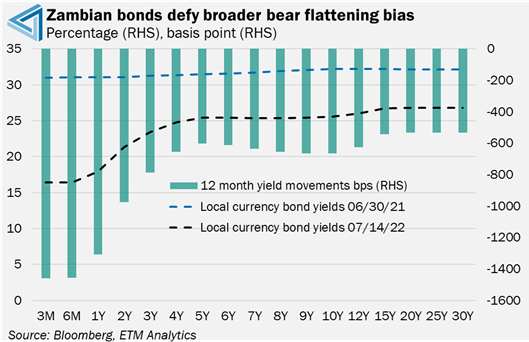 While the reforms and securing of the IMF deal may be taking longer than some market players had expected, it is clear that the government is making progress on both fronts. Finance Minister Musokotwane said on Thursday that Zambia is aiming for a breakthrough at a July 18 meeting with official creditors led by China and France that would unlock a financing deal with the IMF, which has already been passed at a staff level. Commenting on the matter, IMF spokesman Gerry Rice said on Thursday that “If official creditors can succeed in providing the financing assurances to Zambia within the next few weeks, we can then take that to our board for consideration of a program,” adding “we’d be looking at probably around early September for that.”

Optimism surrounding the IMF deal and the possible restructuring of the nation’s external debt has seen Zambian local currency bonds outperform over the past year. Notwithstanding the sharp rise in global interest rates, yields across the Zambian bond curve plunged over the past 12 months, with the most significant moves on the front-end. For context, the 1yr local currency Zambian bond yield has fallen by more than 1300bps since the start of H2 2021. Movements on the long-end have been less pronounced, with the 20yr yield falling by just over 500bps. While much of the positive news is priced in, any signs that the creditor committee is progressing toward restructuring the nation’s debt and securing the IMF deal would come as a tailwind for Zambian bonds.

Africa has always been known for being a resource-rich continent, and one of these recourses includes gold. The top producer of the precious metal is Ghana, followed by other countries such as South Africa and Nigeria. There has been a lot of talk about gold in the market lately, with the yellow metal facing a dichotomy of forces, including risk-off conditions, a surging USD and rising US Treasury yields as the Fed hikes aggressively to regain control of inflation. 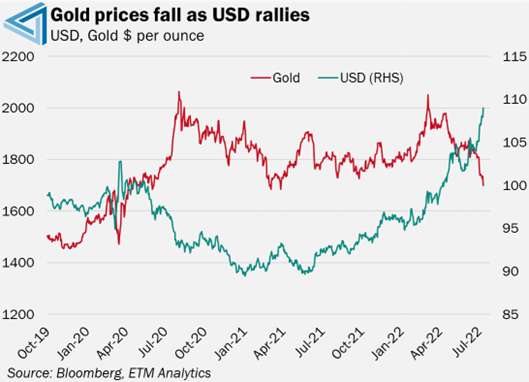 There’s a moderate negative correlation between the USD and gold. The correlation figure is -0.62. This partly explains why gold prices are being driven lower due to dollar strength and rising US Treasury yields. There are also opposing forces at play which are capping the downside moves, such as the risk-off conditions, which is a factor that has also driven dollar strength. While gold prices have come under pressure in recent months, they remain elevated compared to pre-pandemic levels, with the yellow metal still clearly appealing to investors during these uncertain times.

With global recession fears rising and gold considered to be a safe haven asset, demand for the yellow metal is expected to remain robust. For gold exporting African nations, this should continue to support exports and offer the currencies of these nation’s some support. Note that Ghana is amongst the top 10 gold-producing countries in the world and should continue to benefit from the high international gold prices going forward.