In February we downgraded our recommendation on kwacha-denominated government debt from Buy to Hold on the assumption that the rally was running out of legs, with the yield on the ZAMGB 11 01/25/2026s having fallen from a peak of c35.5% last April to c21% in February and the ZMW rallying by nearly 30% since its trough in July 2021. While the yield on the longer-dated ZAMGB 13 01/25/2031s has been stable since, there has indeed been a bear flattening in this portion of the yield curve, with the yield on the ‘26s rising from 20.7% to 25.5% (a sell-off of 9.2% in price terms). 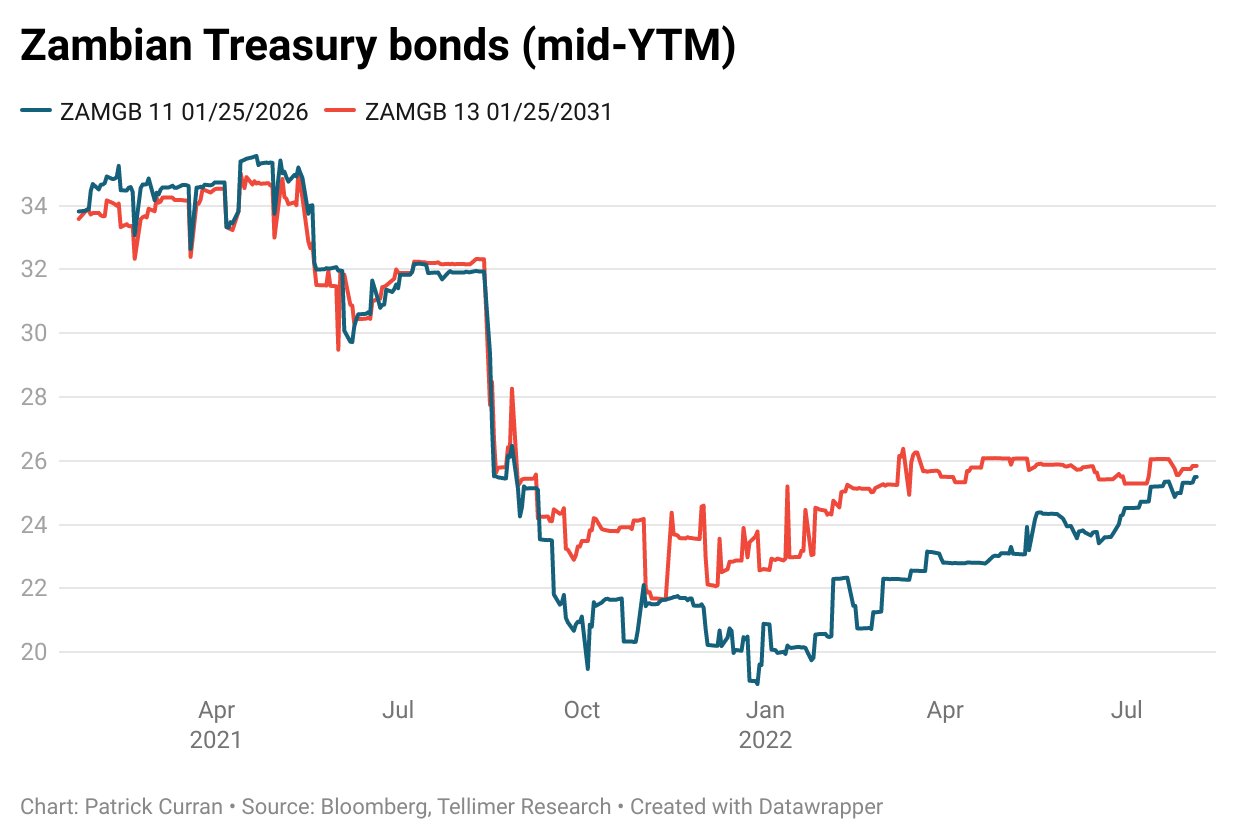 However, the ‘26s have still outperformed the market in total return US$ terms, returning 7.2% compared to an 8.3% drop for the Bloomberg EM Local Currency Government Index since 23 February, proving our downgrade to be premature. This has been driven by a 14.7% current yield at the time of the downgrade and currency appreciation of 9.8% since, driven more recently by the announcements over the weekend that the official sector creditor committee had finally granted the “financing assurances” needed to finalise Zambia’s IMF programme and begin negotiations with private creditors. 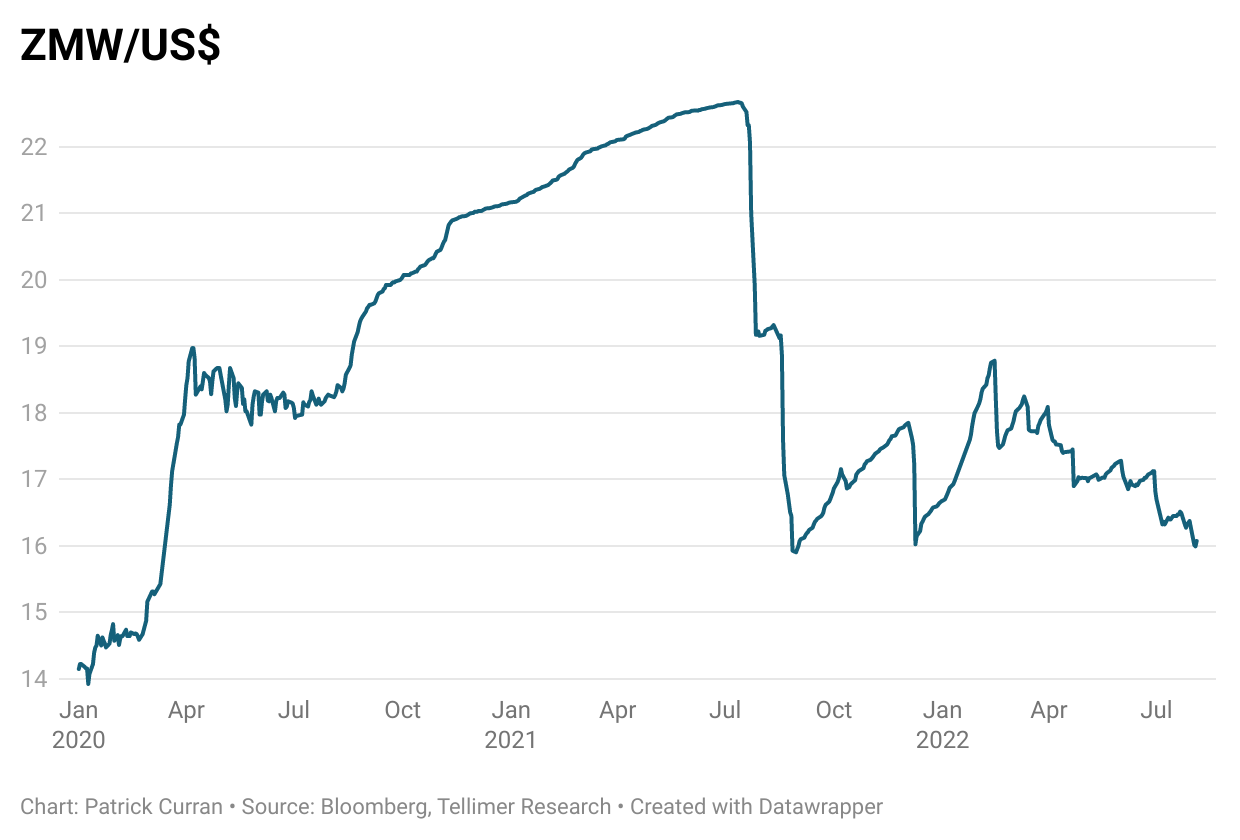 A presentation by the Ministry of Finance to investors on Wednesday and posted to the MoF website outlines the status of the restructuring. While official creditors have agreed in principle to restructure Zambia’s debt, there were no details on the perimeter or terms of the restructuring or assumptions underlying the Debt Sustainability Analysis (DSA), clearing what we think is the bare minimum threshold for what could reasonably be considered "financing assurances". Calls for the private sector to agree to relief on equal terms, therefore, seem premature, with still no clear outline of what official sector relief will look like and limited sharing of the information required for the bondholders to conduct their own analyses.

That said, the presentation does confirm the government’s intention to exclude “non-resident holders of kwacha-denominated debt…from the restructuring perimeter,” which has been the assumption underlying our preference for local currency over US$-denominated government debt. Further, with the yield curve relatively flat at c26% +/- 0.5% from 2026 onward and inflation falling just below 10% in July, Zambia now has among the highest real yields in the world in the mid- to longer-end of the curve (+15.7% for the ‘26s). 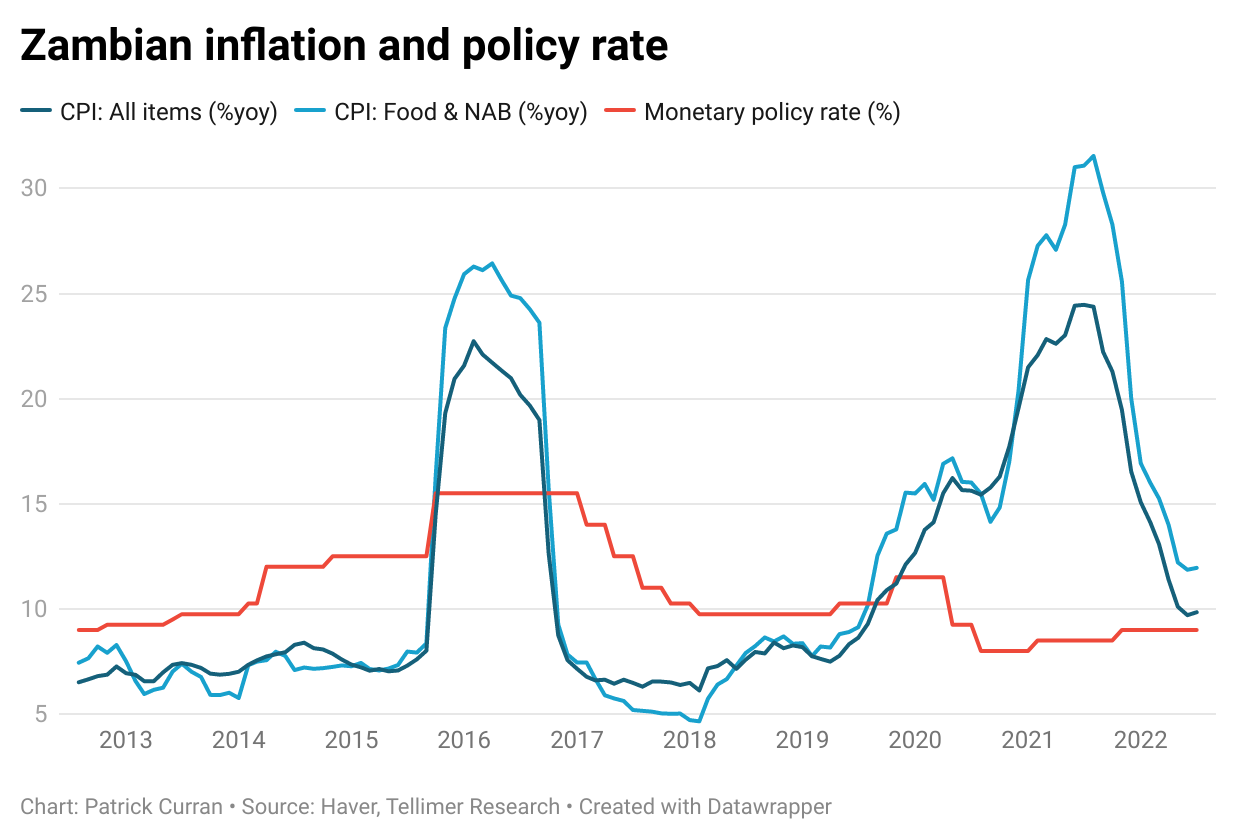 Although expression of the government’s intention to exclude domestic government debt from the restructuring is not a guarantee, we think that the confirmation of intent alongside the sharp rise in real yields once again makes Zambia’s local government debt stand out as an attractive investment opportunity (a rarity for local currency debt in an environment of Fed tightening, dollar strength, and low to negative differentials between local currency and US$-denominated bonds in many jurisdictions).

That said, ZMW appreciation somewhat undermines the attractiveness of the trade. The ZMW has risen by 80% in real effective terms since its trough at the end of 2020 and 70% since mid-2021, making further appreciation seem unlikely. While much of the appreciation is simply a reversal of the steady depreciation seen from mid-2017 to mid-2021, Zambia’s REER now sits c20% above its 10-year average, per data from JP Morgan. 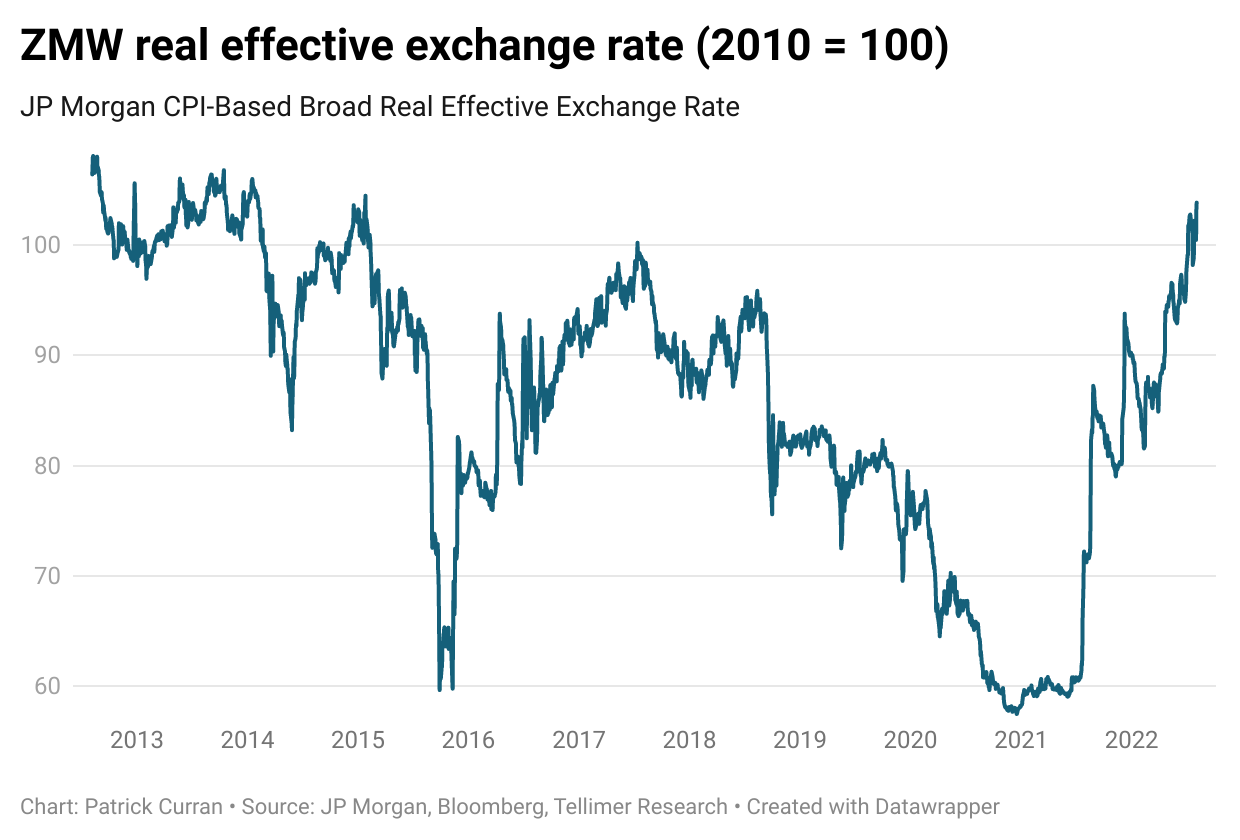 ZMW appreciation has been driven largely by Zambia’s strong current account surplus, which reached nearly 13% of GDP in 2021 and 22% in Q1 22 per official data. However, the IMF’s estimate of a 6.7% of GDP surplus in 2021 and projection for a 4.4% surplus in 2022 points to large discrepancies between official and IMF data, possibly driven by differences in the classification of profit repatriation by international mining companies (with official data showing a sharp rise in “other investment” outflows from non-financial corporations and households in the financial account but a limited increase in “primary income” outflows in the current account, where profit repatriation would normally be located). As a result of the large financial account outflows, FX reserves have been flat since Zambia received the US$1.3bn SDR allocation last August despite a hefty current account surplus. 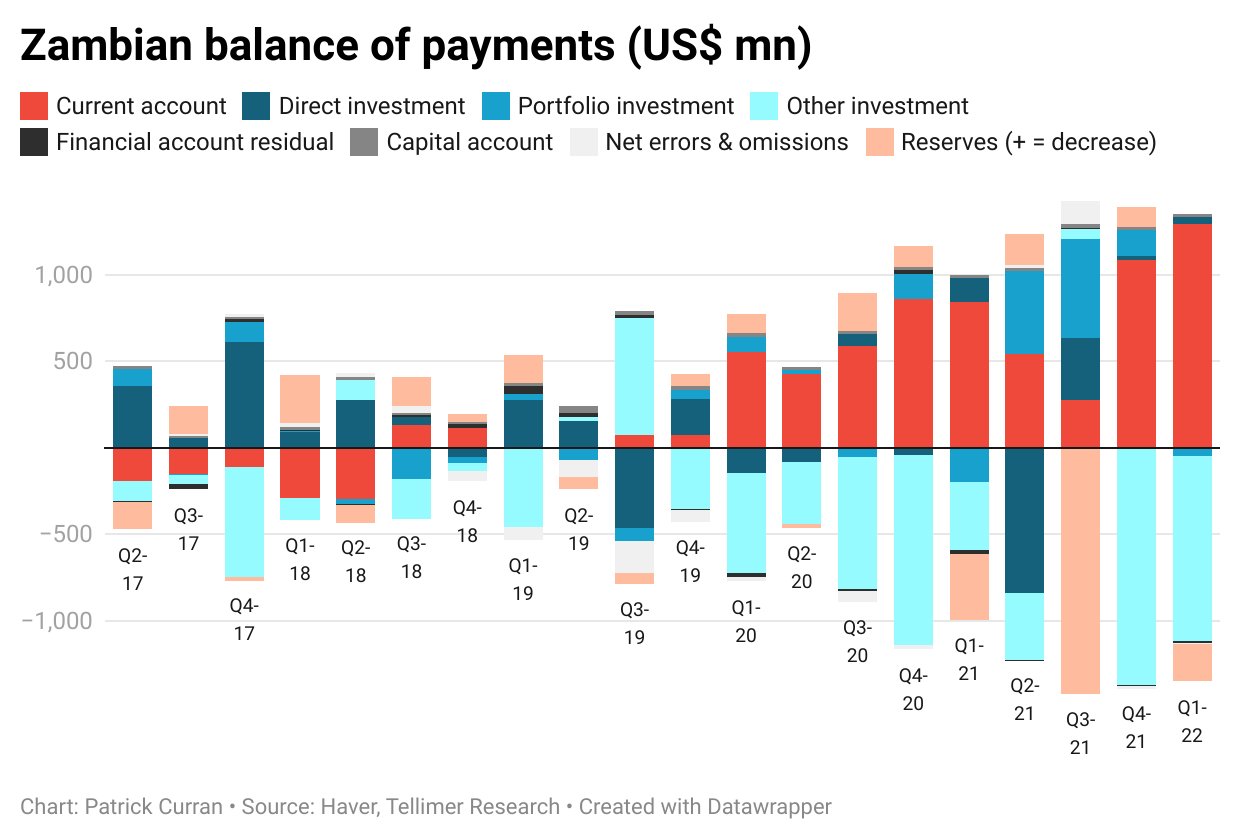 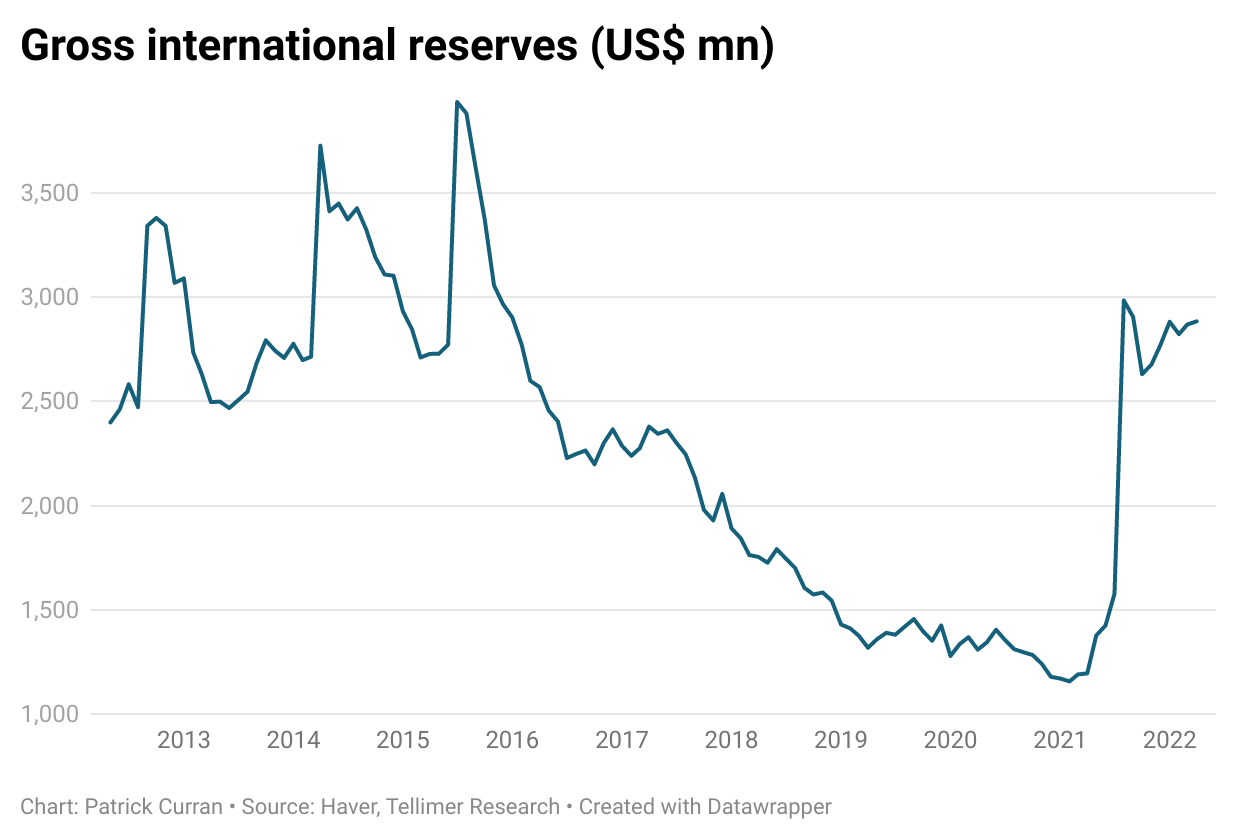 Further, the current account surplus is likely to decline in the coming months on falling copper production and prices (copper output fell 7.4% yoy in H1 22 to 364,089 tons and copper prices are down over 20% ytd, although the decline in copper receipts will be partially offset by fewer outflows from the repatriation of mining profits) and, once the restructuring is completed, the resumption of external interest payments.

Indeed, this decline is already evident in the higher frequency trade data, with the trade surplus nearly halving from US$1,040mn in Q1 to US$548mn in Q2 on the back of a 37% yoy rise in imports versus a 5% yoy rise in exports. 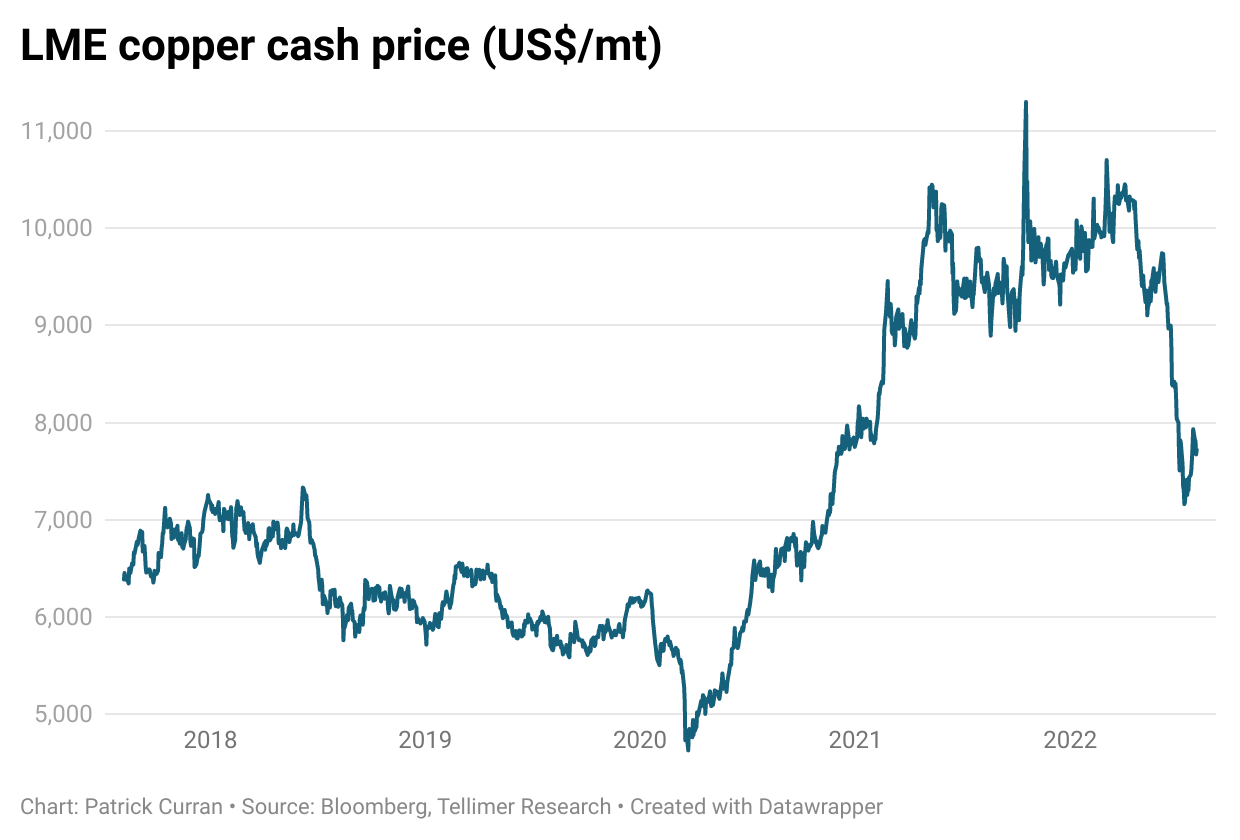 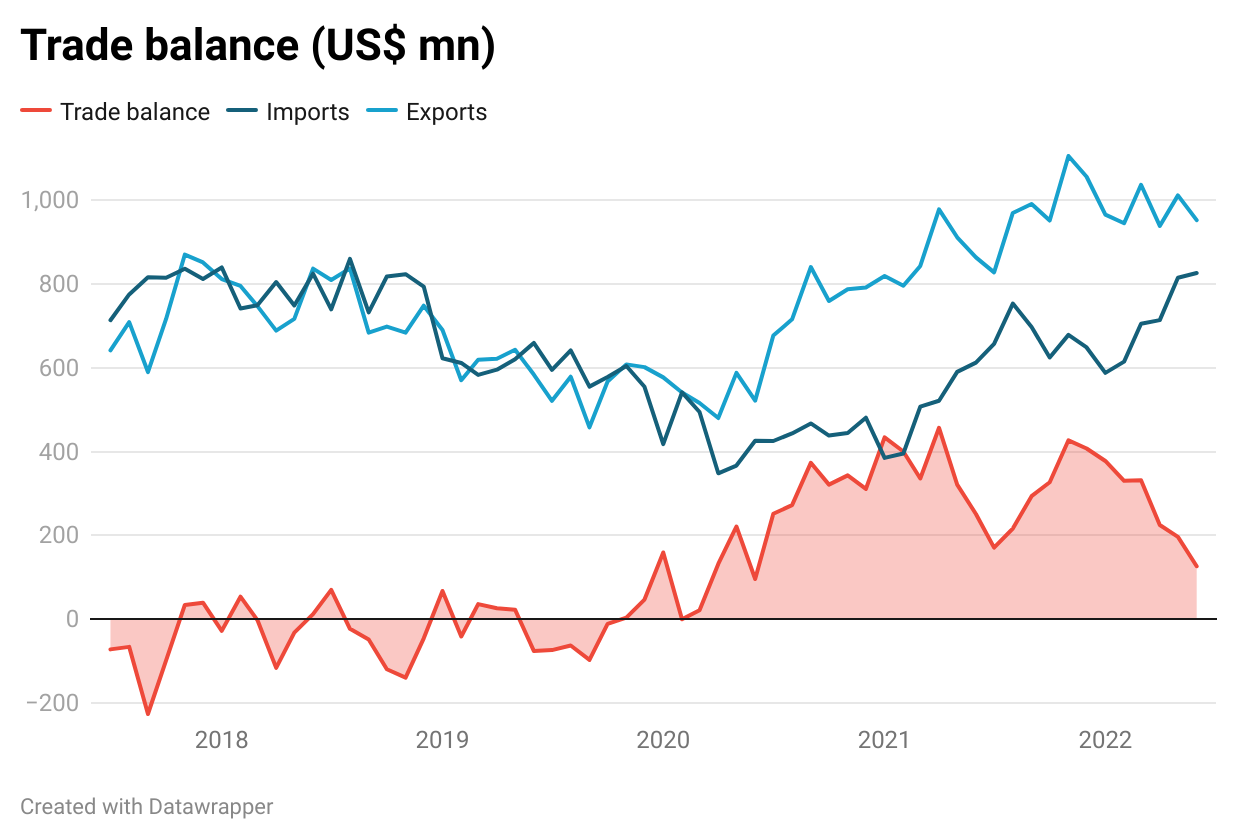 Significant non-resident holdings of local government debt also show that the trade is already relatively crowded, with holdings rising from US$850mn (c14% of total domestic debt and c72% of gross international reserves) at the end of 2020 to US$3.2bn (c28% of the domestic debt and c111% of reserves) at the end of 2021. While most non-resident inflows have likely been longer-term in nature, the large stock still presents the risk of destabilising capital outflows. 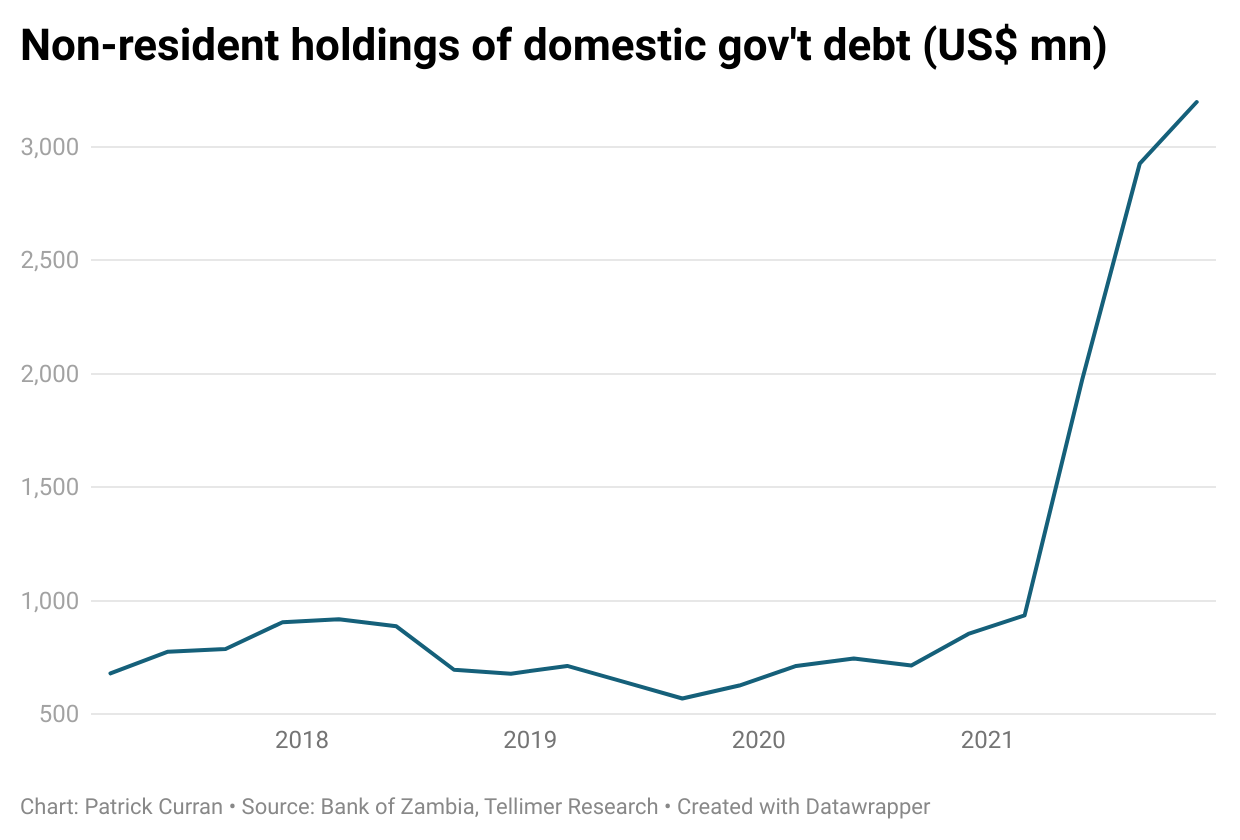 Despite the risks, we think Zambia’s high real yields are attractive and a still relatively robust balance of payments should insulate the ZMW from a disorderly depreciation. Further, against the backdrop of broader EM weakness and volatility, local Zambian debt will likely remain a relatively low beta play and should continue to outperform the market.

As such, we upgrade our recommendation on the ZAMGB 11 01/25/2026s from Hold to Buy at US$67.9 (25.5% YTM) as of cob on 5 August on Bloomberg. We prefer the ‘26s for their relatively high liquidity and low duration given a flat yield curve that does not provide much of a pickup for taking on duration and inflation nearing the end of its downward trend (thus making further rate cuts unlikely).