Since Zambia reached a staff-level agreement (SLA) with the IMF in December for a three-year, US$1.4bn extended credit facility (ECF), there has seemingly been little progress towards securing the “financing assurances” that are necessary to gain approval from the Executive Board. That said, Finance Minister Situmbeko took to the airwaves earlier this month to say that he expects negotiations with creditors on the debt restructuring to conclude by the end of April, before finalising the IMF programme by May or June.

As we highlighted at the time of the SLA, there is typically a circular nature to sovereign debt restructuring, whereby the IMF requires sufficient progress on creditor negotiations before a programme can be finalised, while creditors require 1) an IMF programme to be in place before agreeing to restructure the debt and 2) an IMF-formulated debt sustainability analysis (DSA) to provide guidance on the amount of relief that is required to restore debt sustainability.

Indeed, Zambia’s finance ministry said recently that the “government will only be in a position to provide granular details after finalization of the DSA,” which the authorities expect to happen in the coming weeks. However, creditors may baulk at a restructuring proposal that is based on a DSA formulated without their input, which could cause some friction during negotiations. It is essential that the process is iterative and brings all stakeholders to the table to ensure that debt is set on a sustainable path in a way that is both politically palatable and restores future market access.

While the problem of circularity is present in all restructurings, Situmbeko’s ambition to finalise the restructuring before the ECF is potentially problematic as it is not clear that the government has yet made any progress on creditor negotiations. And, without more transparency on Zambia’s economic outlook, reform and restructuring plans, and DSA, and without the opportunity to provide input on the same, creditors may struggle to arrive at mutually acceptable terms with the government. More concrete information on the status of and assumptions in the ECF is, therefore, a prerequisite for restructuring, while progress on creditor talks is urgently needed to bring IMF talks to a close.

However, uncertainty over arrears makes it difficult to convert the budget into accrual terms, with the white paper pointing to a large jump from ZMW32.5bn (9.9% of GDP) at the end of 2020 to ZMW76.6bn (18.8% of GDP) by September 2021. There may be a difference in coverage between these two figures, with the 2022 budget showing arrears accumulation of just ZMW5.9bn versus the ZMW44.1bn outlined in the white paper and the audited stock of arrears sitting at ZMW46.9bn in June 2021, but either way the stock is astronomically high and will weigh on growth for years to come, with the government planning to liquidate outstanding arrears gradually from 2022-27. 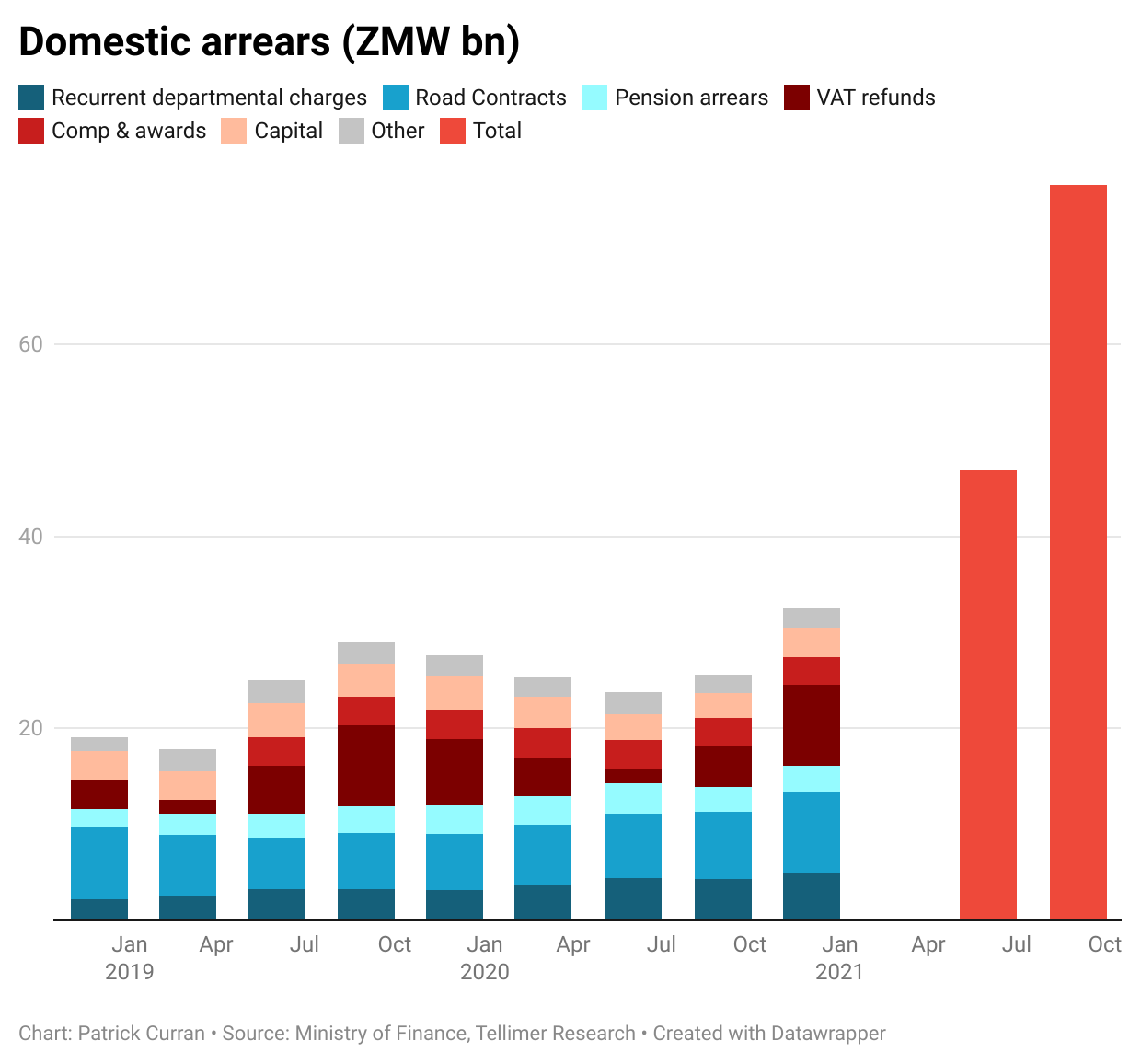 Using the range of estimates on arrears accumulation to establish a high and low figure results in a vastly different budget deficit once translated from cash to accrual terms, with the deficit sitting above 17% of GDP in the high case and below 7% of GDP in the low, making for very different starting points for Zambia’s planned consolidation. That said, Zambia’s medium-term targets are slightly more ambitious than those outlined in the October 2021 IMF WEO, which provides some assurance that the contours of Zambia’s reform plan are broadly in line with IMF goals, even if more work needs to be done to finalise the modalities. 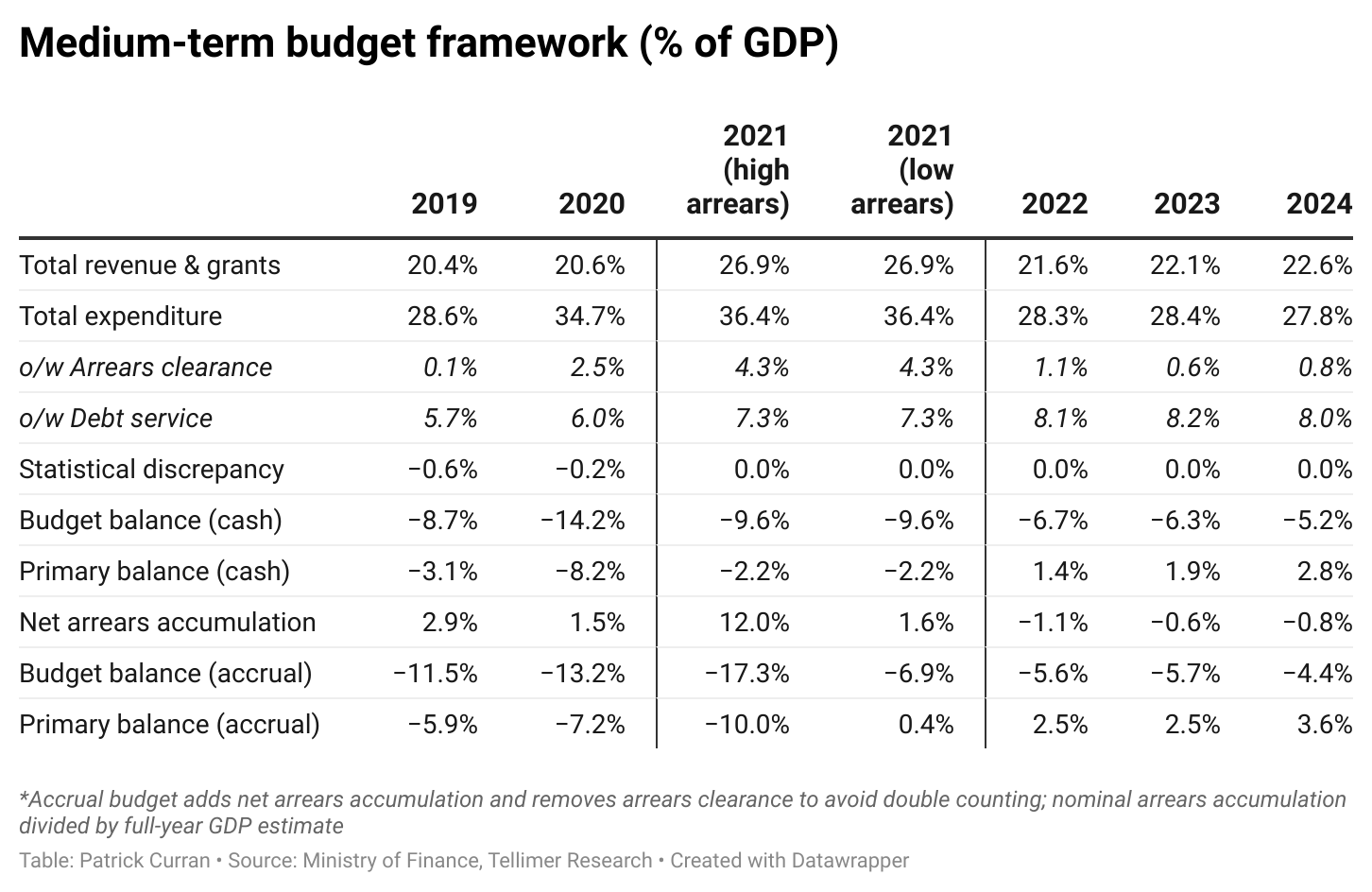 The next step is for Zambia to establish restructuring talks with its creditors, which first need to form a committee. Limited progress thus far implies serious downside risks to Situmbeko’s ambitious April 2022 restructuring target. And, while President Hakainde Hichilema (HH) has continued to promise that Zambia will not favour Chinese creditors, telling the FT last month that “what we don’t intend to do is to cross-subsidise,” it is telling that Chinese creditors have yet to officially sit down at the table with Zambia’s Paris Club creditors to form an official sector creditor committee (echoing similar difficulties in Ethiopia).

Further complicating matters, Bloomberg reports that some bondholders are considering the inclusion of ESG targets in the restructuring, which would be a welcome development from the ESG perspective but could further slow negotiations. Ultimately, we continue to believe that delays are likely and that there is very little upside to Zambia’s eurobonds based on current pricing in the mid-70s. Bonds are currently pricing in haircuts of c30% at an 8% exit yield, which we think is the best-case scenario, while the London-based Jubilee Debt Campaign recently said haircuts of closer to two-thirds would be required.

Although this is likely a gross overestimate, the true value likely falls somewhere in the middle and implies downside risk to current pricing. As such, we retain our Sell recommendation on Zambian eurobonds at US$76.37 (22.31% YTM) on a mid-basis as of cob on 21 February on Bloomberg. 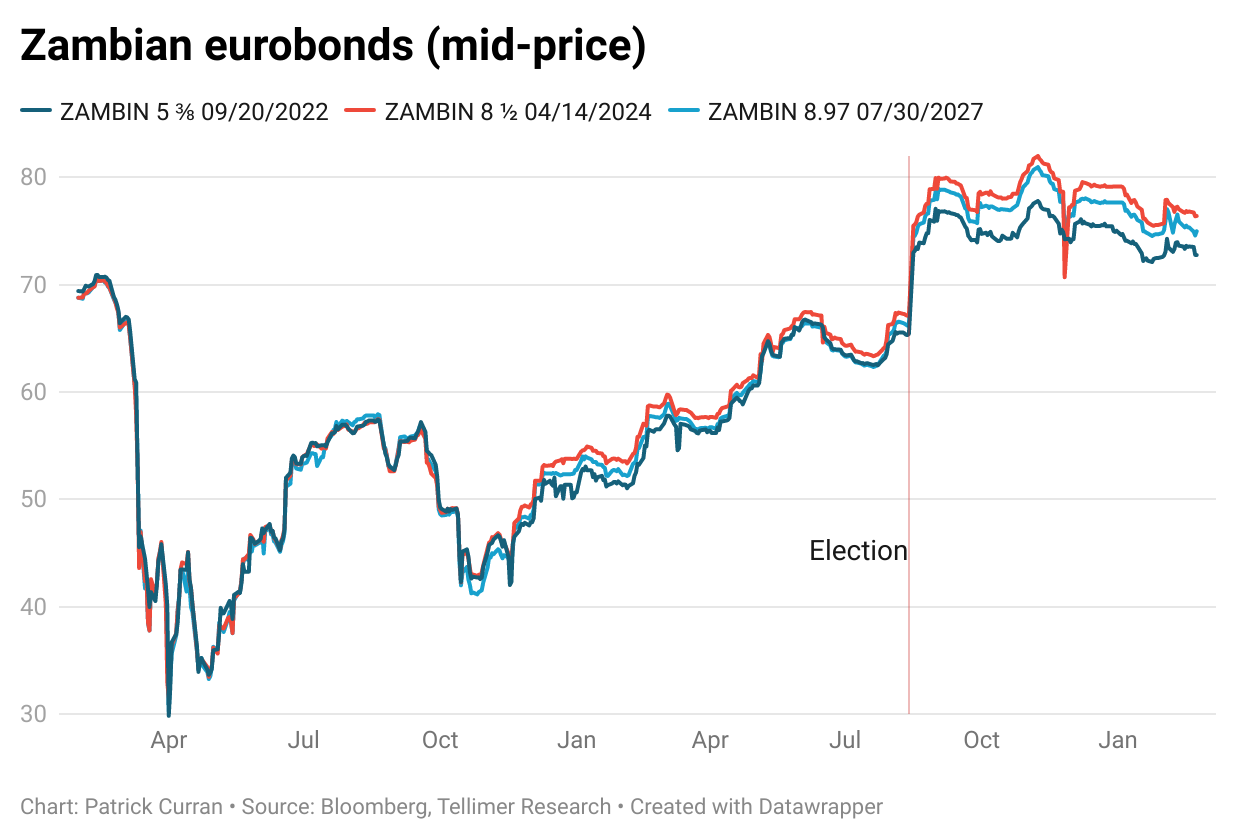 There is also less upside on local debt, with the yield on the ZAMGB 11 01/25/2026s falling from a peak of c35.5% last April to c19% by the end of the year, before rebounding to c21% now (a return of c63% over the past year, or c86% in US$ terms). Although inflation has fallen from a peak of 24.6% yoy last July to 15.1% in January, persistent global inflationary pressures and tighter developed market monetary policy could keep ZMW under pressure, the current account surplus has moderated from 12.6% of GDP in 2020 to 7.7% in 2021 (providing less of a tailwind), and the risk of capital outflows has risen (with non-residents holding 28.8%, or US$3.3bn, of domestic debt in December, albeit with over 99% held in bonds).

Indeed, ZMW has lost much of its shine after rallying by over 40% last July and August on the back of the market-friendly election outcome, and is now down 5.7% ytd versus a 2.3% rise in the JP Morgan EM Currency Index. With most of the upside now captured, we downgrade our recommendation on government debt from Buy to Hold at a mid-YTM of 20.76% for the ZAMGB 11 01/25/2026s as of cob on 22 February on Bloomberg. 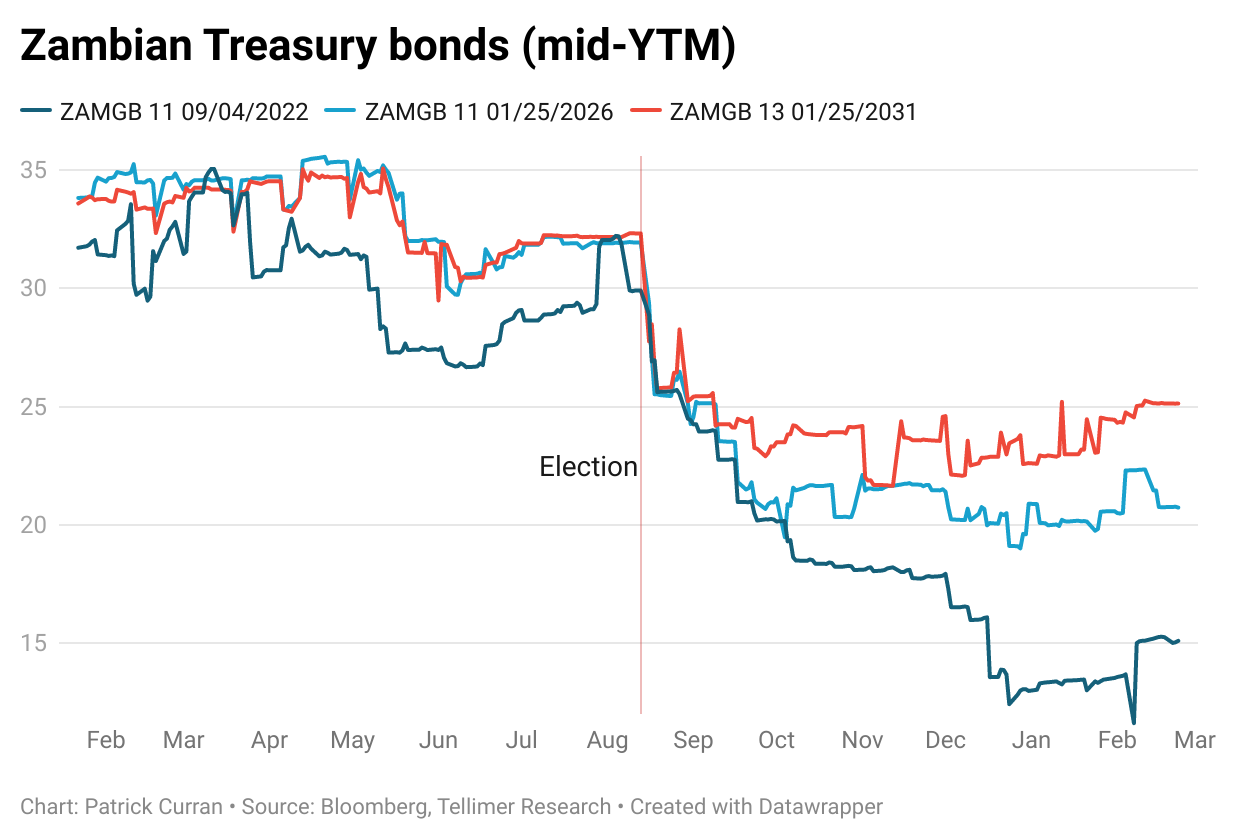