By the close of business today Zambia could become the fifth country globally and first in sub-Saharan Africa to default since Covid began. Zambia’s troubles pre-date the pandemic, with debt/GDP rising over 6x over the past decade amid aggressive public borrowing and a refusal to seek help from the IMF, and should therefore not be seen as a bellwether for other African credits. 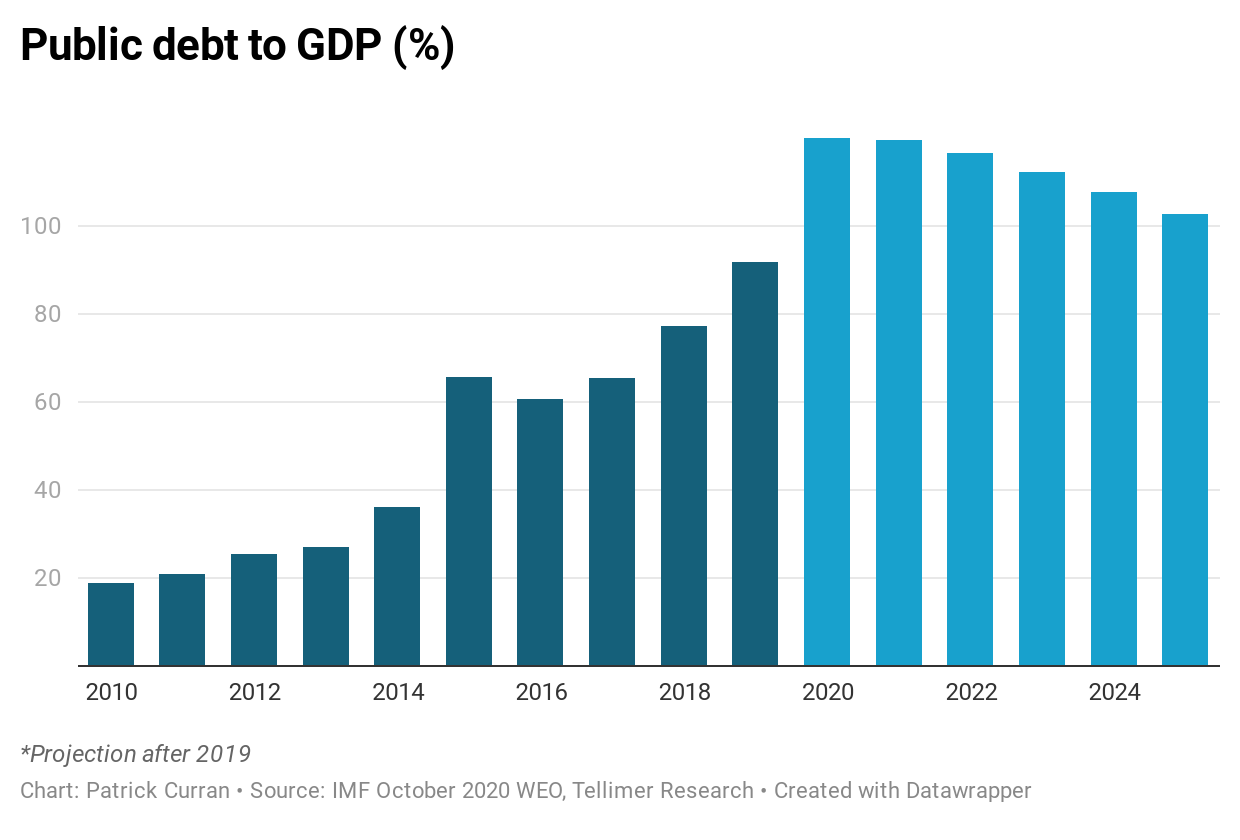 Today bondholders rejected Zambia’s consent solicitation to delay US$120m worth of eurobond coupons due from 14 October to 14 April, after having refrained from voting it down on 20 October to give the government more time to provide more clarity on its Chinese debt stock and make progress towards IMF funding.

The grace period on the US$42.5m coupon payment due 14 October expires today, meaning that Zambia has until the end of the day to make the payment or enter default. The Ministry of Finance had previously said that, should the standstill be rejected, they would be unable to make payments. However, the picture was complicated today when Vice President Inonge Wina said in parliament that “I can assure the honourable members that Zambia will not default.” In addition, the government budgeted for eurobond payments in 2021 in case the standstill is rejected, creating mixed messages.

However, Finance Minister Ng’andu said in a text message to bondholders after the standstill was rejected that “Given our precarious fiscal position that requires us to treat all creditors pari-passu, Zambia would unfortunately have no other alternative but to accumulate arrears,” seemingly affirming Zambia’s intention to default. Bonds initially rallied today on Wina’s comments but are now largely flat on the day and are still down 10pts since mid-September. 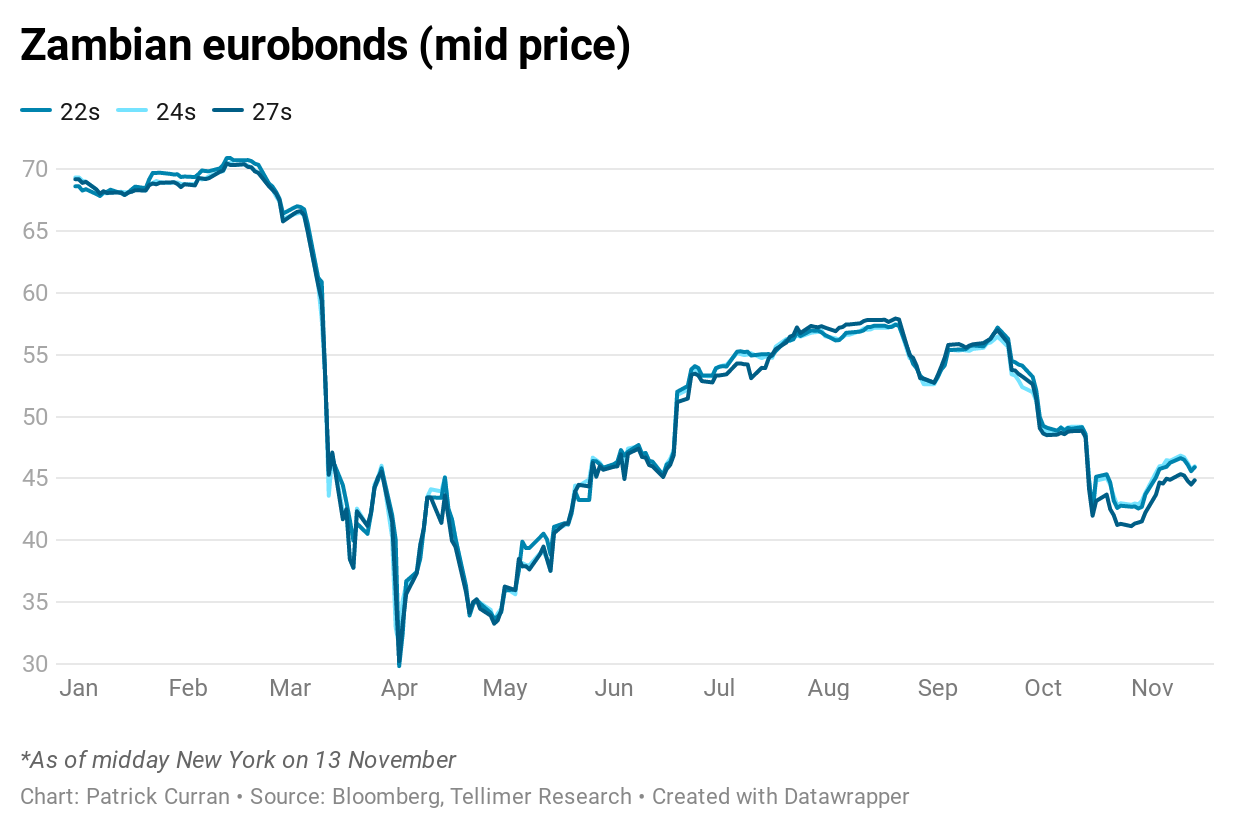 Even if Zambia pays the coupon today as a token of good faith, it has been clear about its intention to restructure and this would therefore just delay the inevitable. However, it could still be positive to the extent that it signals more consensual negotiations and as an illustration of creditor power, which could enhance recovery values.

The lack of market movement shows that default was largely priced in heading into the day, with the government already telegraphing its intention to forego payment regardless of the consent solicitation outcome. And with S&P already downgrading Zambia to ‘SD’ last month, much of any potential forced selling has probably already taken place (though Fitch still rates Zambia ‘C’ and Moody's rates it ‘Ca’).

Equally, bondholder rejection of the consent solicitation is unsurprising as we think the main sticking points in the restructuring process remain, namely: 1) lack of transparency on Chinese debt and how it will be treated relative to eurobonds; and 2) lack of meaningful progress towards an IMF program.

On the Chinese debt front, Finance Minister Ng’andu seems to think the transparency requirement has been met and told reporters recently that “We’ve given all the information that needs to be given concerning the Chinese debt.” In addition, the government has recently received some debt relief from the China Development Bank and has reiterated its commitment to treat all creditors the same.

However, debt owed to the CDB totalled US$391m at the end of 2019, a small portion of the total Chinese debt stock of US$3.1bn. Other official Chinese creditors have insisted that they will only participate in debt relief if the US$201mn of existing arrears is cleared, while Zambia has requested that Chinese arrears be deferred in line with treatment under the G20’s DSSI and its request to bondholders.

Failing to involve the remaining official Chinese creditors, and indeed any unofficial Chinese creditors too, would effectively place this debt senior to the eurobonds if Zambia fails to pay today. In addition, bondholders may not be confident that the disclosed amount of Chinese debt is fully representative and will need to be sufficiently assured that all loans have been disclosed before agreeing to a restructuring.

On the IMF front, there has been little evidence of progress towards a program. The IMF named a new resident representative to Zambia last month, two years after the post was vacated, the first sign of relations beginning to thaw. However, Zambia’s failure to secure a program after nearly five years of stop and go negotiations is undoubtedly a sore point for bondholders, who likely feel that default could have been avoided had the government committed itself to a program as long promised.

In addition, the IMF will not simply roll over and provide funding without a credible commitment to fiscal consolidation from the government, or perhaps meaningful progress on PSI. From this perspective, Zambia could be an important precedent for other countries seeking IMF funding or DSSI relief, potentially prompting PSI in other countries with unsustainable debt burdens.

However, we think meaningful fiscal consolidation is unlikely before the August 2021 elections. Indeed, President Lungu recently defended his government's decision to embark on massive road works across the country, saying that “Of course our critics have said…that we were reckless for having borrowed. But they are shy to tell the people frankly how that money we borrowed has been used.”

As a starting point for the restructuring, the government cited a potential 35% of GDP target in NPV terms. This would require a nominal haircut of c70% based on the IMF’s 2020 and 2021 debt/GDP forecast of 120%. However, this falls to a 40% haircut using a less ambitious (but still significant) 70% debt/GDP threshold.

But with the government continuing to push ahead with costly infrastructure projects and ramping up spending on inefficient subsidies, bondholders probably won’t be receptive to calls for major nominal haircuts. In addition, the latest eurobond was issued in 2015, with the near doubling of the debt/GDP ratio since then driven almost entirely by Chinese and other private borrowing.

And, with a bondholder committee that holds c40% of Zambia’s eurobonds (with a blocking across each of the three issues) and that is reportedly in “close contact” with another 30% of bondholders, creditors will have significant influence over how the restructuring unfolds. With most forced selling probably having taken place already, most bondholders are probably prepared to hunker down for the long haul. As a result, bonds have traded tightly in the +/- US$45 range over the past month.

We downgraded from Buy to Sell on 25 September on the back of Zambia’s expansionary 2021 budget announcement, with bonds selling off by c10pts (c20%) by 15 October before rebounding to cUS$46 as at the time of writing today (still c12% lower). We think that bonds are likely to remain range-bound as the restructuring process unfolds, and upgrade from Sell to Hold.

As we don’t expect any meaningful progress towards fiscal consolidation or IMF funding ahead of the August 2021 elections, the key risk is that debt continues to worsen and restructuring must occur from an even worse starting point when negotiations kick off in earnest. With the kwacha in freefall and c75% of debt denominated in FX, further depreciation would continue to push up debt even in the absence of further borrowing. 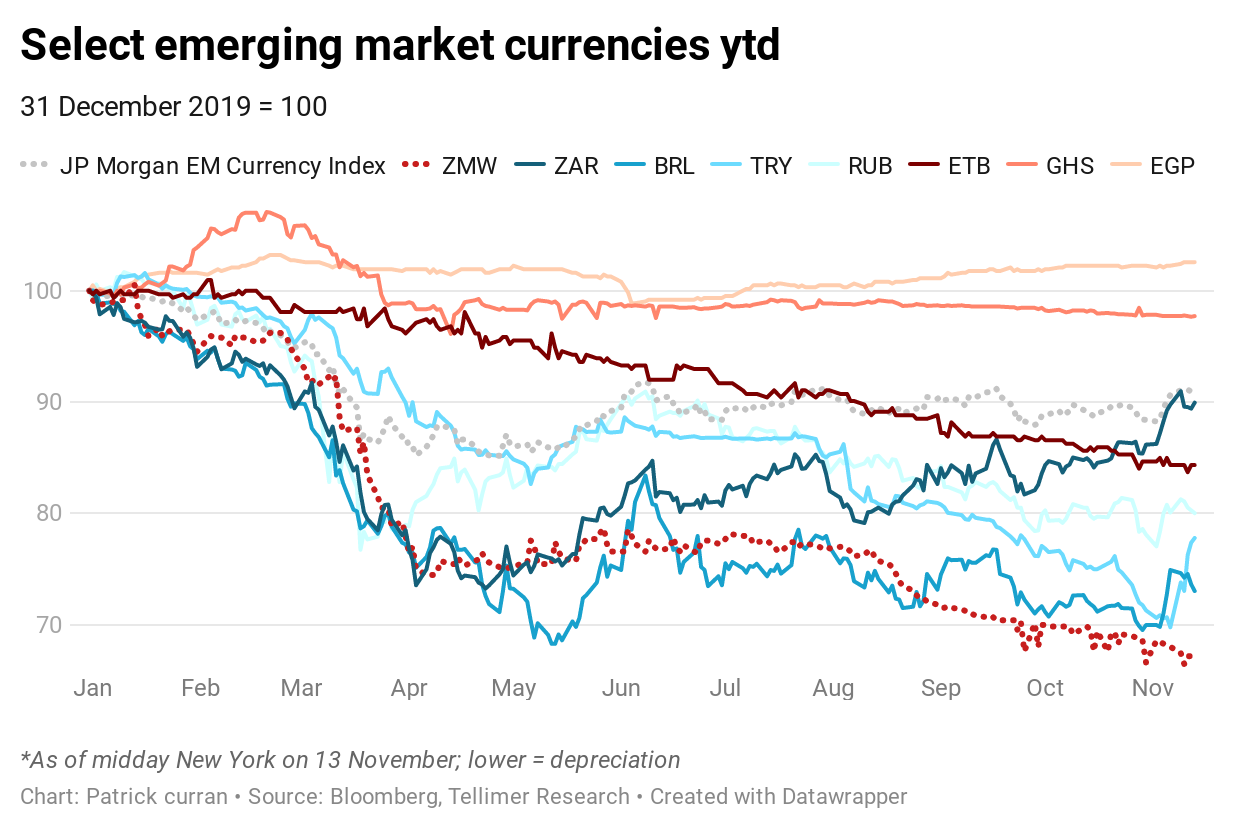 But with a strong committee, bondholders will continue to push hard for a restructuring based on cashflow relief and minimal nominal haircuts (similar to what we saw in Argentina and Ecuador). And they are probably prepared to be patient as their claim accrues past due interest (PDI) from missed coupons.

While we continue to think the restructuring process will be difficult and protracted, not least because of the need to balance the interests of bondholders with China and apparent lack of appetite for reform from the government, we think the risks are now largely priced and Zambian eurobonds will likely remain stable, barring a major breakthrough one way or the other in the restructuring process.