Zambia announced a consent solicitation today, seeking approval to defer interest payments on its three outstanding eurobonds from 14 October 2020 until 14 April 2021. If approved, the interest would be paid on 14 April, less a 0.05% consent fee that will be paid upon approval of the plan. Further, there will be no additional interest accrued on the deferred payments. 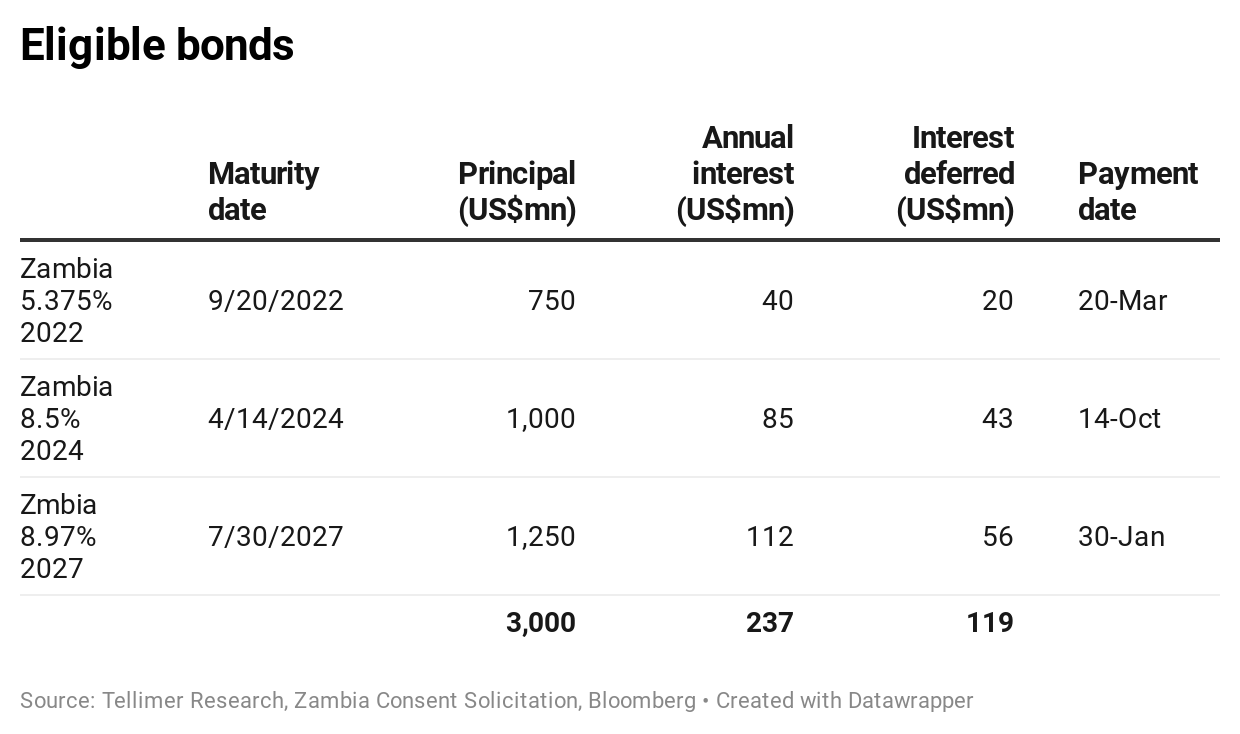 The resolution requires the approval of 75% of bondholders, with a voting deadline of 10am London time on 16 October to precede the formal meeting and announcement of results on 20 October. If quorum is not reached for the meetings (two-thirds of eligible holders for the 22s and 24s and three-quarters for the 27s), the voting deadline and meetings will be adjourned to 30 October and 3 November, respectively (at which point quorum drops to one-third of bondholders for each note).

While the intention to defer interest and signal of a restructuring ahead is no surprise (the government hired Lazard as advisors on 27 May and a creditor committee was formed on 23 June), bonds dropped 3-4.5% across the curve on the news.

This indicates that the announcement itself took investors by surprise, amid market talk that there had been little consultation with bondholders ahead of today’s announcement. If so, this could mean that negotiations have started off on the wrong foot before they’ve even begun. 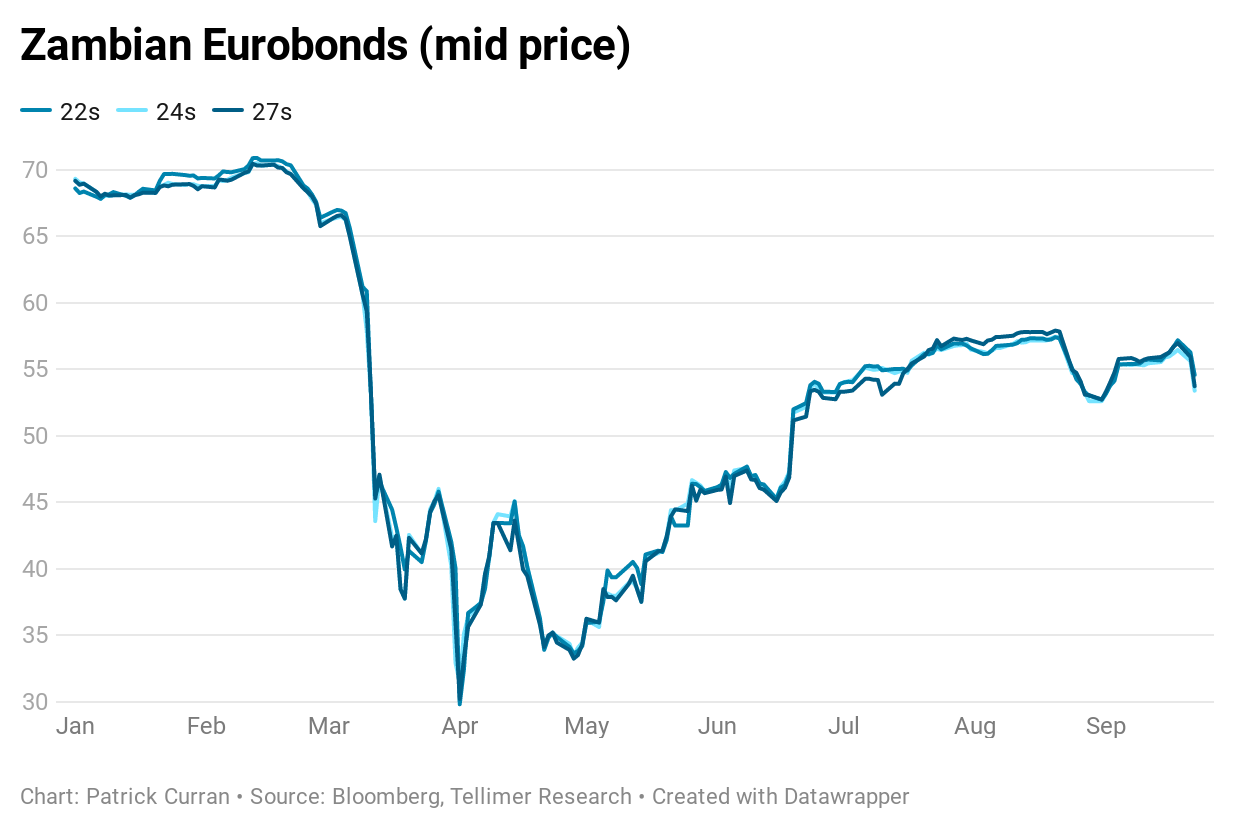 In the statement (here), the government says “A combination of declining revenues and increased unbudgeted costs caused by the Covid-19 pandemic have resulted in a material impact on the Government’s available resources to make timely payments on its indebtedness leading to increasing debt servicing difficulties.”

It highlights the government’s ongoing negotiations for IMF financing and request for relief under the G20’s debt service suspension initiative (DSSI), adding that “Zambia has also decided, in line with the G20 recommendation, to seek the participation of its external commercial creditors in similar debt service suspension arrangements.”

Given Zambia’s well-known debt problems, if it wanted to take advantage of DSSI on its bilateral debt it would have looked odd not to have sought similar treatment on its bonds under the DSSI’s comparability of treatment requirement (although we wonder if it might have required a bit of a nudge to do so). Zambia has thus become the first country to seek private sector treatment on bonded debt under DSSI (Grenada withdrew its initial request for PSI and Chad has requested relief from Glencore for oil-backed debt but not traditional bonds).

The statement also emphasises that “The Proposal is intended as a first step to provide the Issuer and its advisors the necessary breathing time to finalize the debt sustainability analysis and to define the parameters of a debt restructuring strategy aimed at putting the debt on a sustainable trajectory, which is a pre-condition to IMF lending.”

As such, Zambia appears to be following the Ecuador playbook (see here and here). Prior to agreeing on a comprehensive debt restructuring in July and a US$6.5bn 27-month IMF program in August, Ecuador had deferred interest due from 27 March-15 July until August (although, at the time of the consent solicitation, it wasn’t clear that a full restructuring would follow, as it is in the case of Zambia).

In this sense, an important precedent may be forming for distressed sovereigns seeking relief under the DSSI. Private sector involvement (PSI) may have been the price of DSSI relief to limit free riding, possibly forcing Zambia’s hand (although Zambia was perhaps the clear choice for a test case of this policy). However, it is unclear how much of this decision was driven by the G20 versus IMF, which requires sustainable debt before agreeing on any new financing.

It might also be an important test of private sector appetite for agreeing to debt service relief under DSSI ahead of the IMF/WB annual meetings next month when an extension to DSSI is under consideration at a time when the official sector has expressed its dissatisfaction with the lack of private sector participation so far. If DSSI were to be extended through 2021, the impact would be substantial, with US$237mn of eurobond interest and US$879mn of bi/multilateral debt service over that period. 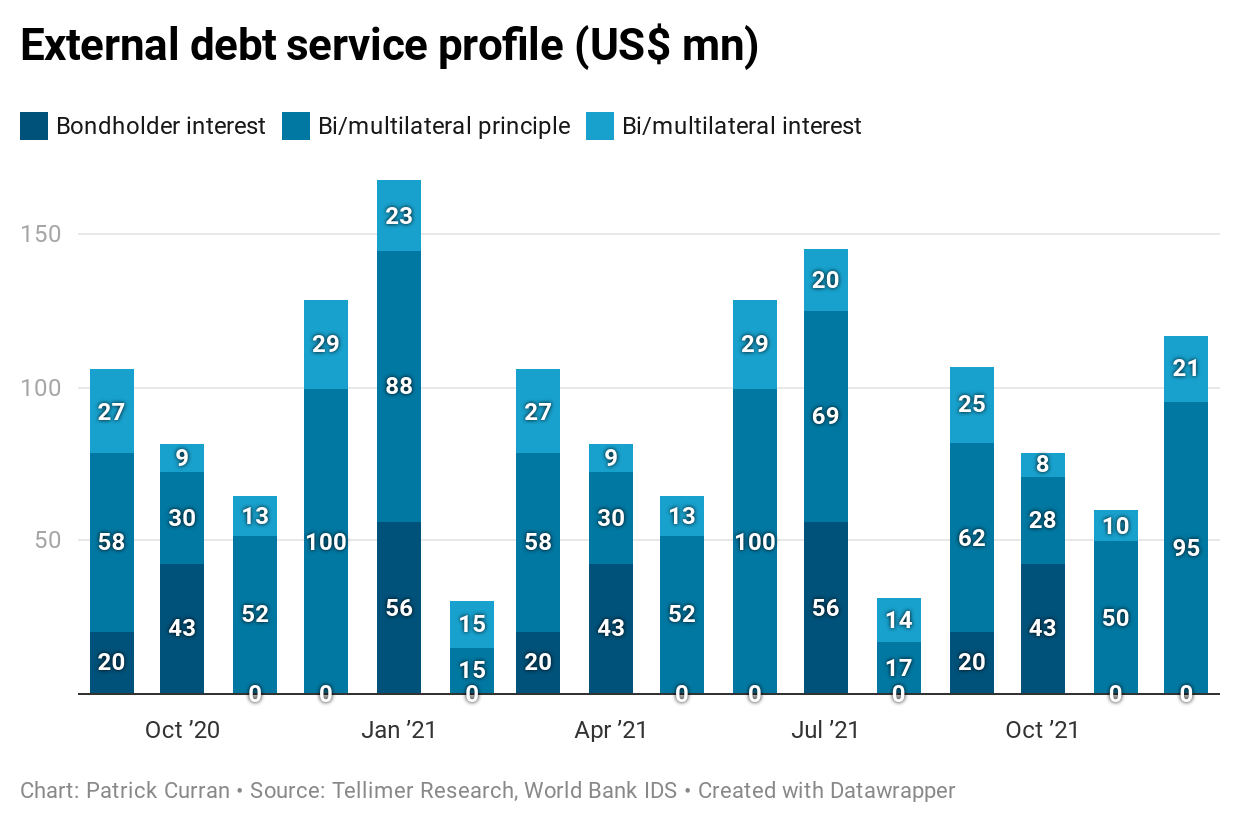 However, the Zambia experience also implies that PSI need not be pari passu with relief provided under DSSI, which spreads deferred payments over four years with a one-year grace period. So the news for creditors is mixed, implying a greater likelihood of PSI for countries in DSSI and/or IMF negotiations but on potentially favourable (or token) terms.

That said, the interest deferral is just the first step in a broader restructuring process. While the initial suspension seems to be more favourable to bondholders than DSSI would imply, we await stage two (the restructuring) to see how bondholders will be treated. On its own, the interest deferral does not materially impact bond values, but, if followed by onerous restructuring terms, clearly that point is moot. Today's price movements may therefore imply expectations of more punitive bondholder treatment than previously thought.

If Zambia is indeed following the Ecuador blueprint, today’s announcement suggests that the government expects an IMF program and comprehensive debt restructuring to be agreed by mid-April. However, we remain sceptical that Zambia will be able to credibly commit to reforms ahead of August 2021 elections, with the bar for IMF funding raised after years of bad faith negotiations (see here).

And, given the often fraught relationship with the Fund, the IMF may make a comprehensive restructuring a prior action to a programme. But bondholders may want better visibility on policy commitment before they can agree to a restructuring too, creating a bit of circularity.

That said, we still think Zambian eurobonds offer some upside (and even more so after today’s price movements). Following Ecuador’s consent solicitation, it agreed to a restructuring that offered a recovery value in the high 50s (see here). Meanwhile, Argentina’s creditors managed to negotiate a deal with a recovery value of cUS$55 (here).

As we have previously written (see here), we think the composition of Zambia’s budget means that significant fiscal consolidation can be achieved simply by cutting capex, and solvency can be achieved with minimal haircuts of 10-30% (or potentially no haircuts at all). However, we think cashflow relief is clearly required given external liquidity constraints.

Meanwhile, liquidity constraints have improved slightly since we last wrote on Zambia in August, with exports actually rising c30% yoy in July. This brings the ytd run rate at -c12% yoy for exports and -c30% yoy for imports, pushing up the trade surplus and leading to a slight increase in reserves. 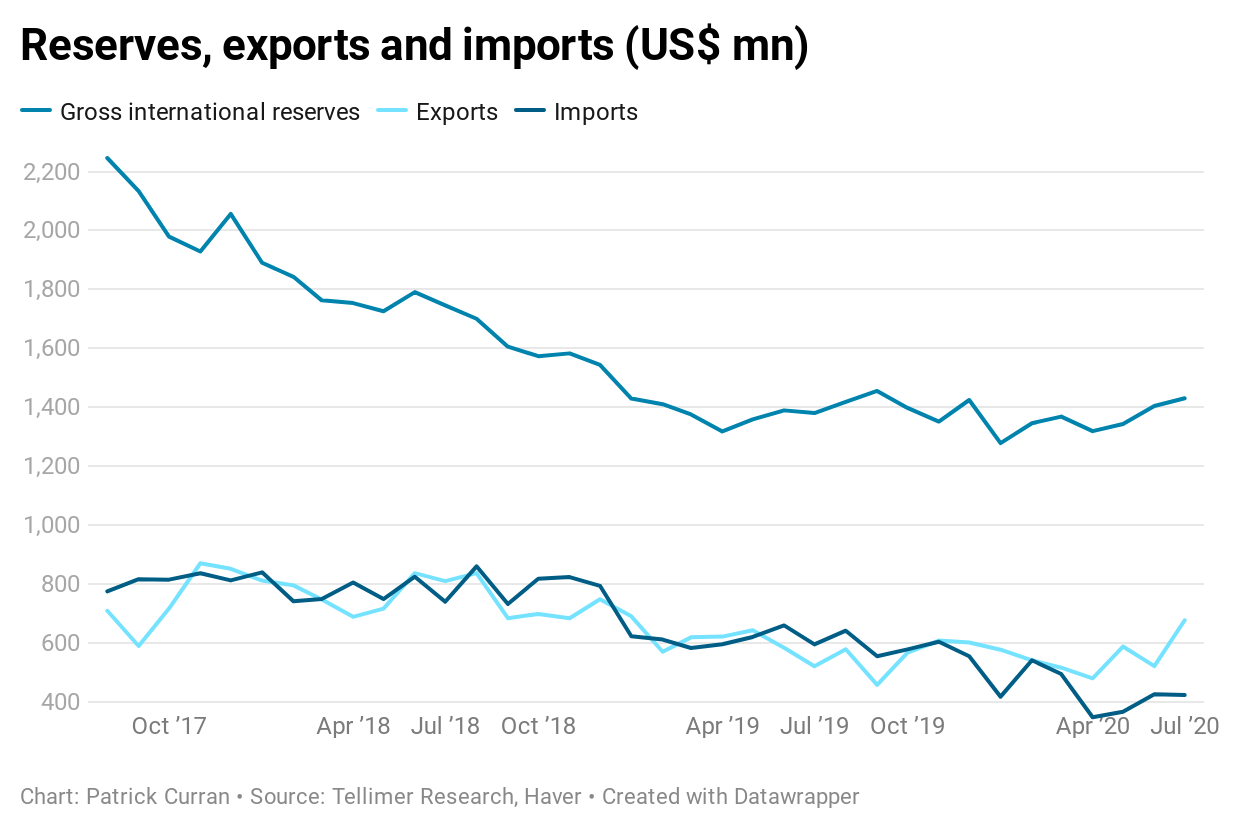 With a strong and organised creditor committee and solid precedent from recent restructurings, bondholders should therefore be able to negotiate a relatively favourable restructuring that centres on cashflow relief and limited haircuts. We reiterate our Buy recommendation on Zambia 24s.