On 10 May, the IMF released a statement on the status of its ECF negotiations with Zambia, saying that “there was broad agreement on the macroeconomic framework” and that “notable progress was made in detailing the key policy measures to address the macroeconomic imbalances currently facing Zambia." The statement added that "the Zambian authorities reaffirmed their continued commitment to reforms. We look forward to continuing ECF discussions as key measures are taken."

Zambia's finance ministry also released a statement of their own, with Finance Minister Bwalya Ng’andu saying that "The reform path is clear. We are committed to securing an IMF programme." The statement adds that "it was jointly agreed that Zambia and the IMF will continue policy discussions at the appropriate time to finalise the timeline for implementation of the agreed reform package… In the meantime, the broad agreement obtained on macroeconomic parameters and fiscal targets will allow the authorities to progress in the technical preparation of debt restructuring talks in the context of the Common Framework as well as with the commercial creditors." 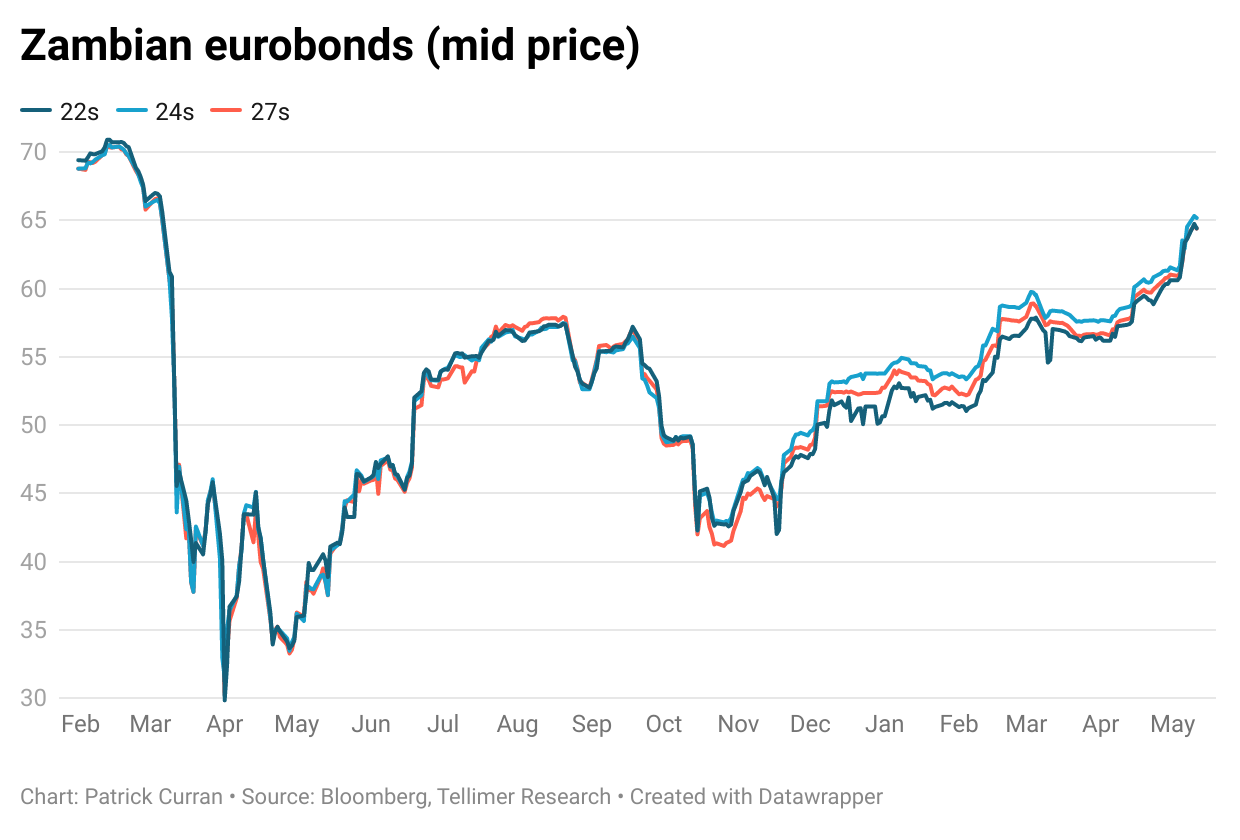 But, as we have long argued, it is now all but guaranteed that a programme will not be secured until after elections, with Parliament set to dissolve on 12 May ahead of the vote on 12 August. This will delay implementation of any prior actions until probably at least September and will put programme negotiations on the back burner, meaning ECF negotiations are unlikely to be concluded until the end of this year, at the earliest.

It is also worth noting that the IMF statement makes no mention of a “staff-level agreement”, which is the next concrete step before a programme is ready to be brought to the Board. A staff-level agreement will only be reached once policy discussions have advanced sufficiently, and potentially some prior actions undertaken. It will also likely be conditional on an agreement being made with bondholders on debt restructuring, creating a circular scenario in which successful negotiations with one stakeholder are necessary to facilitate successful negotiations with the other.

Some may be of the view that the Fund will have the programme prepared and ready for the stamp of approval once elections have passed. But this seems unlikely to us (due to the reasons above), and in any case, would only be possible if the incumbent government that has been negotiating the programme wins. This is far from assured, with the UPND having a solid chance of victory in free and fair polls. However, with intimidation of the opposition already rampant and the voter roll recently scrapped, President Lungu will likely do whatever it takes to assure victory. Indeed, the Varieties of Democracy Project recently rated Zambia as one of the fastest eroding democracies in the world.

In addition, the pre-election policy mix is likely to be antithetical to IMF priorities. A record 69% surge in maize production in 2019/20 has been a major boon to Zambia’s flagging economy, but stems in part from increased support under the government’s Farmer Input Support Programme (FISP) and has led to increased crop purchases by the state’s Food Reserve Agency (FRA) (FISP and FRA subsidies surged to 2.8% and 0.5% of GDP, respectively, in 2020, with total subsidies and transfers reaching 5% of GDP). Agricultural subsidies have long been a sticking point with the IMF, and the record harvest could force the FRA to double down on purchases to absorb excess supply and secure votes ahead of the elections.

Alongside weak revenue performance (10% below target) and robust spending (14% above target), this pushed the budget deficit from 5.5% to 14.4% of GDP on a cash basis in 2020 (above the 11.7% of GDP projection in the September budget and 13.9% estimate in the April IMF WEO). Domestic arrears also increased from ZMW27.6bn to ZMW32.5bn in 2020 (albeit flat in % of GDP terms at 9.2%), suggesting the deterioration was even worse on an accrual basis. That said, in Q1 21 revenue is 13% above target and expenditure is 23% below target, suggesting that the government’s 9.3% of GDP deficit target for 2021 could be achievable (though slippage is likely as elections get nearer).

The mining sector also faces continued uncertainty after the US$1.5bn nationalisation of Mopani Copper Mines, with state holding company ZCCM recently hinting at plans for more nationalisation by saying "Our strategy is to ensure that we increase our participation in the mines, and also at the same time find other ways of extracting value." The Zambia Revenue Authority (ZRA) also made another change to the mining tax regime last week, disallowing deduction of the minerals royalty and imposing a 5% import duty on copper and cobalt concentrates, while the Ministry of Mines says Konkola Copper Mines (which is currently under liquidation due to a tax dispute) has stopped producing due to cash shortages (charges which are denied by KCM’s operators).

Despite difficulties in the sector, copper output rose by 10% to 869,000 tons in 2020. Alongside surging prices (up c33% ytd and c125% since March 2020 lows) this helped push the current account surplus from 0.6% to 12% of GDP in 2020, according to official estimates. However, with a sharp deterioration in the financial account (with FDI falling from 2.4% to 1.2% of GDP and the private sector, led by mining companies, acquiring US$3.2bn of foreign assets), the ZMW and official reserves have continued to decline. And, with ongoing uncertainty in the mining sector, production increases could prove transitory. 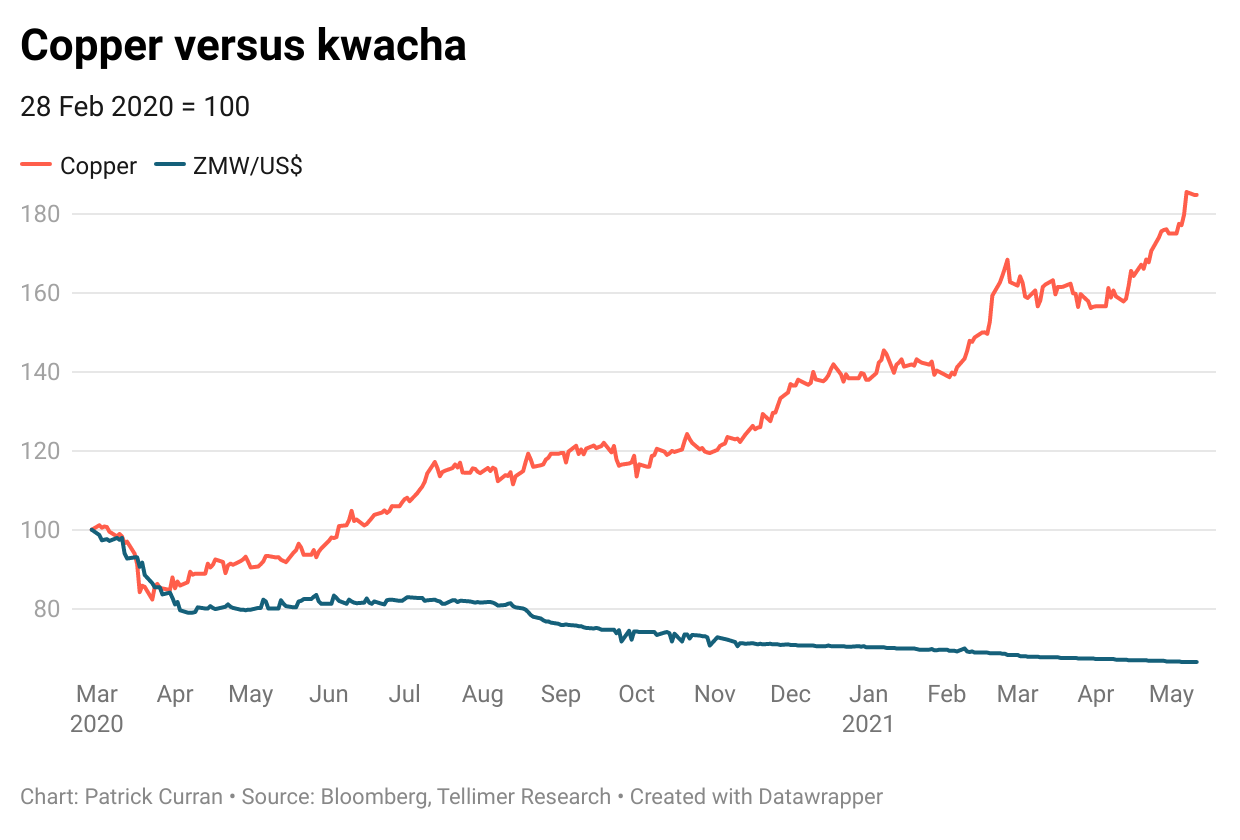 With official reserves now below US$1.2bn (c2.4 months of import), Zambia’s BOP and external liquidity outlook remain dire. The IMF’s recently approved US$650bn SDR allocation could help smooth over imbalances, with Zambia's estimated cUS$1.33bn allocation to more than double reserves. However, this will not be received until August, if all goes to plan, and should not change the restructuring dynamics at all (ie the IMF will not allow the allocation to simply be used to bail out bondholders). 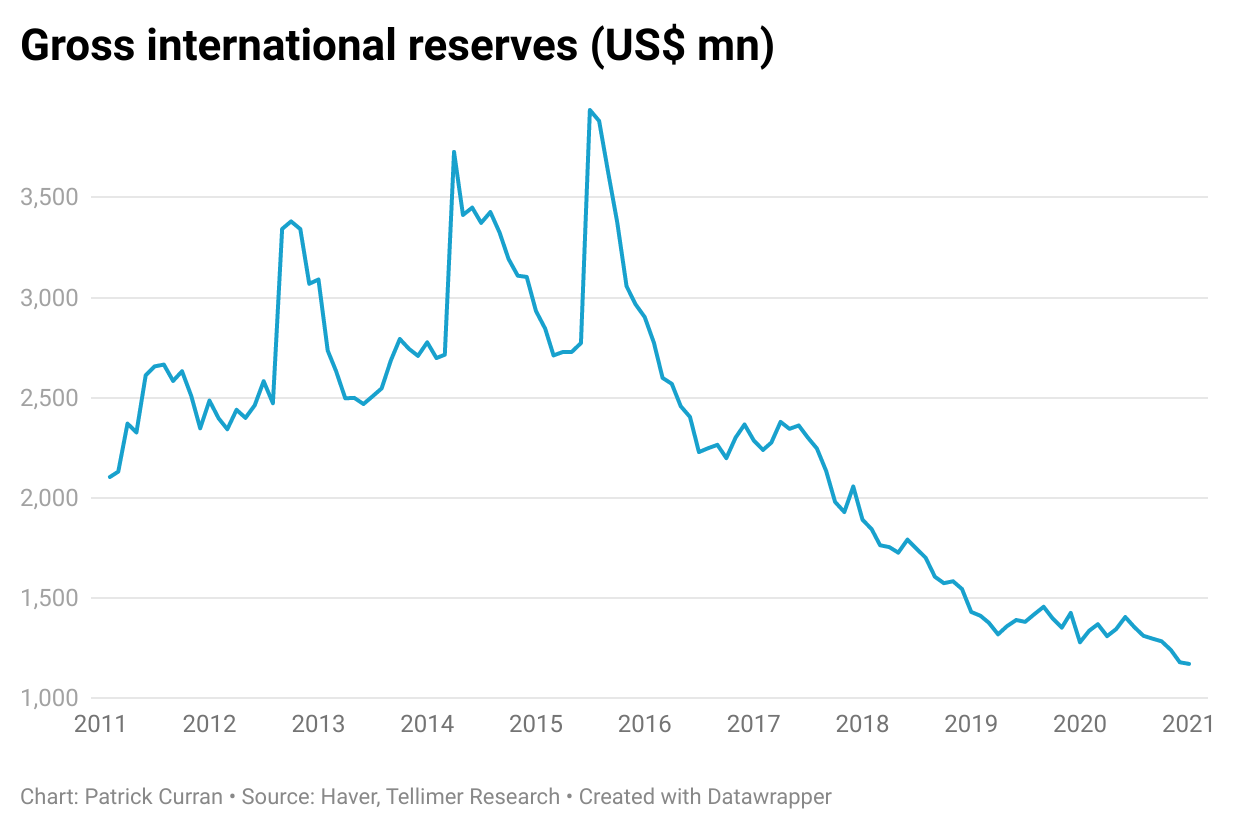 With all that said, Zambia is clearly still not out of the woods despite apparent progress towards an IMF programme. While it is one thing to agree on the policies needed to address Zambia’s imbalances, it is another thing entirely to implement those policies, especially in an election year. Given Zambia’s tumultuous history with the IMF and track record of massive pre-election slippage, we think the IMF will need to see tangible progress on prior actions before a programme is agreed. That is unlikely until the last quarter of this year at the earliest, which will likely delay any agreements until at least year-end (and more likely early 2020).

While the finance ministry seems hopeful that "agreement obtained on macroeconomic parameters and fiscal targets will allow the authorities to progress in the technical preparation of debt restructuring talks," we think that any agreement with creditors will be contingent on the finalisation of IMF negotiations. The ministry's remarks imply that some progress may have been made during the recent talks on a DSA that will help define what is needed in a restructuring, so it is certainly possible that there will be more on which to base discussions with creditors. That said, nothing will be agreed until the programme negotiations are finalised, so the restructuring will likely remain in a state of limbo until after elections.

The restructuring is also being done under the Common Framework, which is still uncharted territory, and it is not clear how and how quickly the process will unfold. In any case, bondholders will clearly want a seat at the table and will not be happy if a restructuring is presented to them as a fait accompli based on discussions between the government, the IMF, and bilateral creditors. As the key guidepost to how the restructuring will unfold, bondholders will also want a say in how the DSA is constructed. This will likely slow the process down, and without much evidence of engagement between Zambia’s varied stakeholders at this point, we think there is still a lot of heavy lifting to be done. 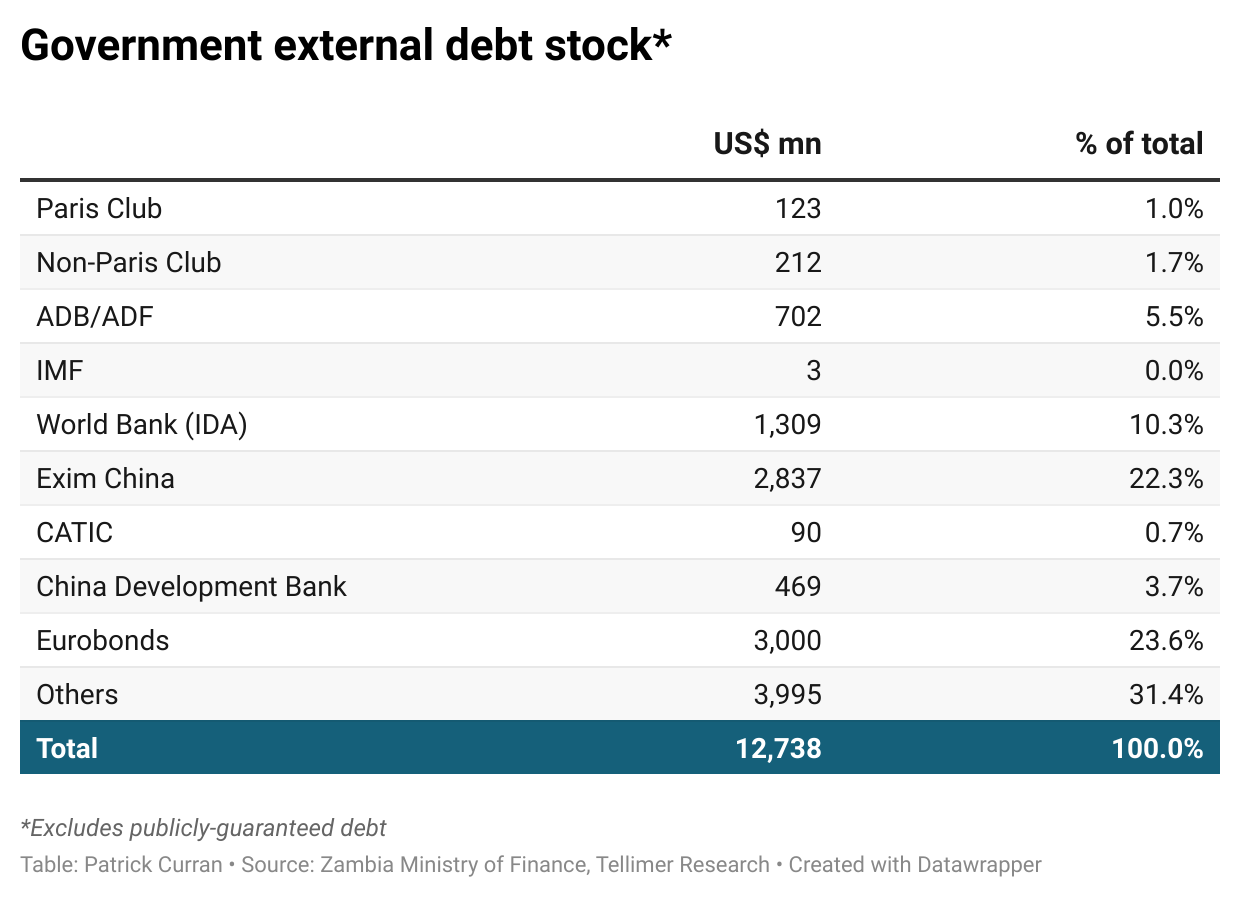 In the meantime, we affirm our Hold recommendation on Zambian eurobonds. A more complete restructuring analysis is required to arrive at an updated fair value for Zambia’s eurobonds (we most recently ran one in September), but at this point, it seems much of the upside is already priced in. While the finalisation of IMF talks could provide one last catalyst for appreciation, we think risks are skewed firmly to the downside amid a weak macro and policy backdrop and pre-election pressures that will likely lead to fiscal slippage and put Zambia at odds with the IMF and creditors.

Zambia is treading down the wrong path, 25 January